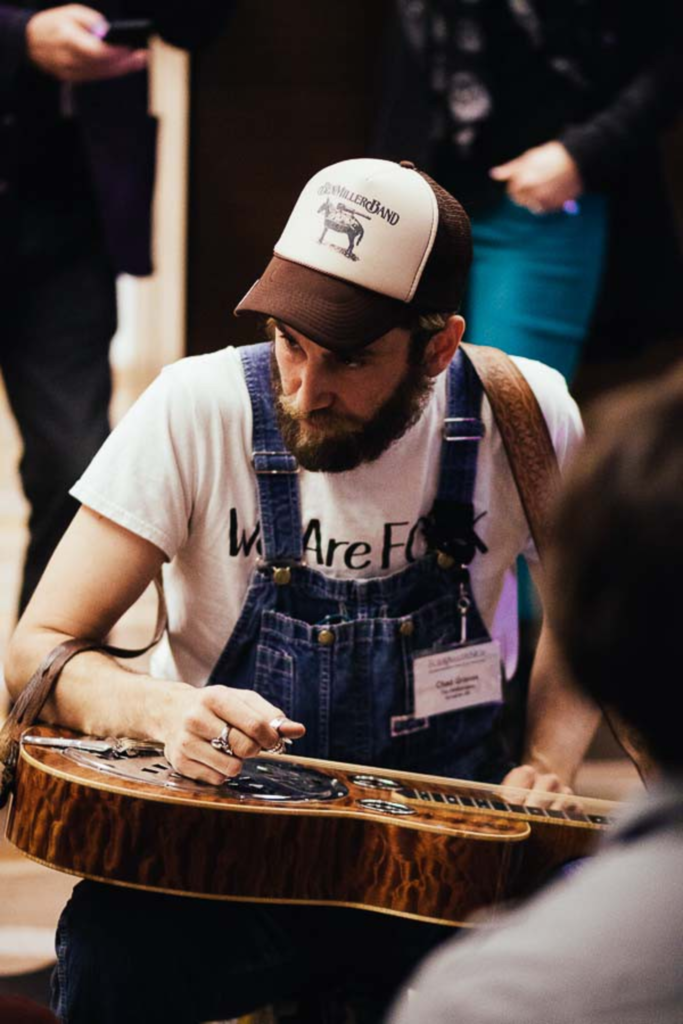 Like a great deal of the hometown acts playing the opening-night showcase at the Folk Alliance Conference last night, I was new to the whole FAI experience. And even though The Pitch has coordinated weeks of coverage leading up to this event, I still found myself wholly unprepared for the experience.

The Westin Crown Center was taken over by an army of artists, all swearing allegiance to the holy order of folk music. Pockets and corners of the hotel lobby had been claimed by camps of artists, rehearsing and jamming. The closest hotel restaurant – the Brasserie – was overrun as people lined up at the bar for libations, and the bartenders, between drink pours and making change, looked utterly bewildered.

But that’s to be expected. After all, there are nine official showcase stages – set up in conference rooms – throughout the hotel, and there are many more private showcases in hotel rooms scattered over three floors. Officially, there were 64 local acts booked for the conference last night. “Overwhelming” is an understatement.

I started the night with the Kansas City Bear Fighters. This fun foursome, lead by Quinn McCue, was the perfect kickoff to the evening.

“Are you guys ready to get your folk on?” McCue demanded of the small gathering before him. There was enthusiastic cheering all around. 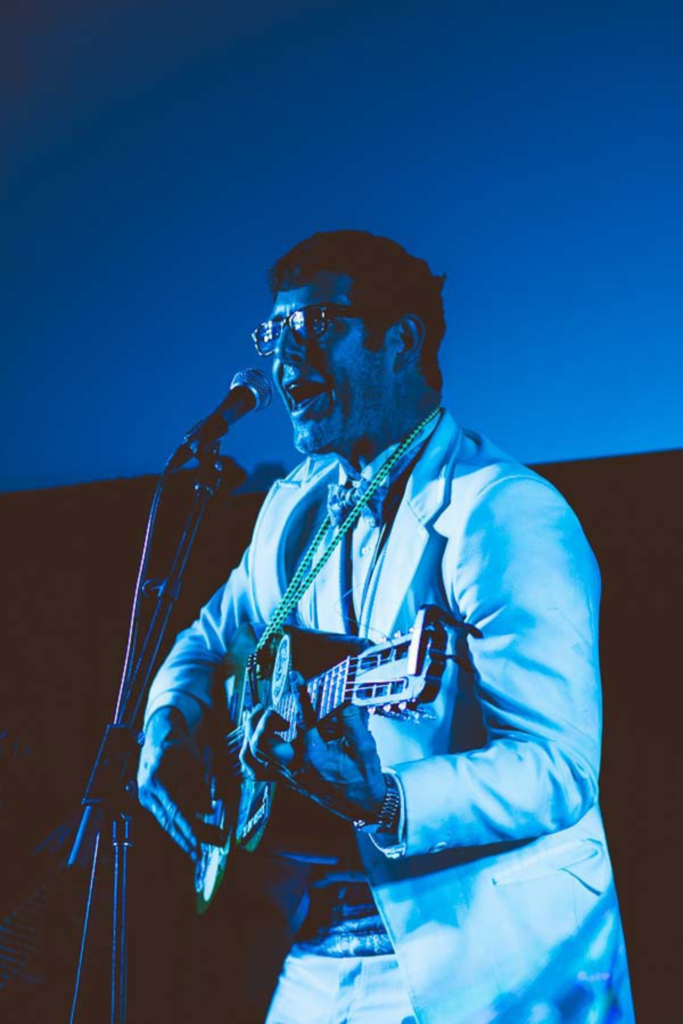 McCue is the kind of friend I want to have: witty, irreverent, goofy and an all-around good time. He led his men – all decked out uniformly in white suits that, under the strange blue light of the conference room, made the quartet look ghostly – on a riotous rampage of tongue-in-cheek folk tunes. With all their easy smiles and their jokes, McCue and his men made the performance – which included an upright bass and an accordion – look easy. This band could easily whip a crowd into a frenzy, and I found myself wishing there was more of a crowd – and more of a frenzy – in the spacious conference room.

That sentiment would hold true for the rest of the evening. There was certainly no small amount of people attending the conference, whether it was to play or to simply enjoy, but the result of having spread-out conference rooms and so many acts to choose from meant that many of the showcasing artists sometimes played to handfuls of people. This never diminished the talent, though. 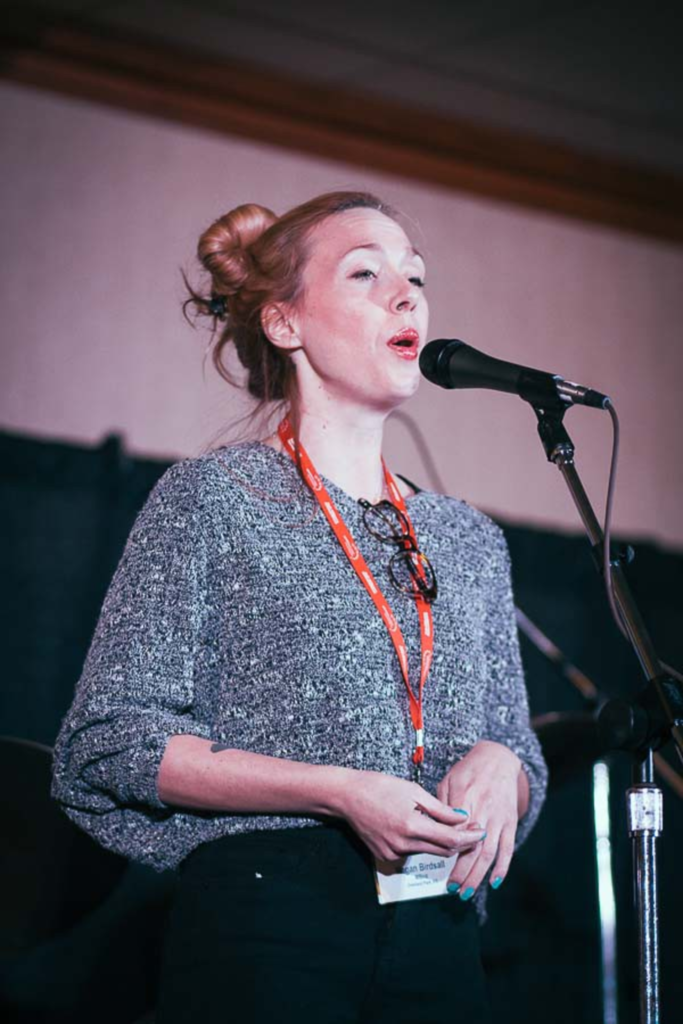 This was the case for M. Bird, a jazzy quartet led by singer Megan Birdsall. She began the set accompanied only by an upright-bass player, singing a jazz standard that suited her throaty voice perfectly – it was the exact opposite of the party the KC Bear Fighters were leading one conference room over.

“We all started out in jazz and blues,” Birdsall said, “and then we all started writing together, and now we make music like this.” With that, she launched into “Drive,” an uptempo jazz-folk-pop hybrid.

Birdsall defines chanteuse. Even under the unforgiving – and somewhat awkward – lighting of the room, Birdsall’s set was transformative. If you closed your eyes, you could imagine yourself in some slinky, low-lit lounge, letting Birdsall and her secret powerhouse vocals take charge. 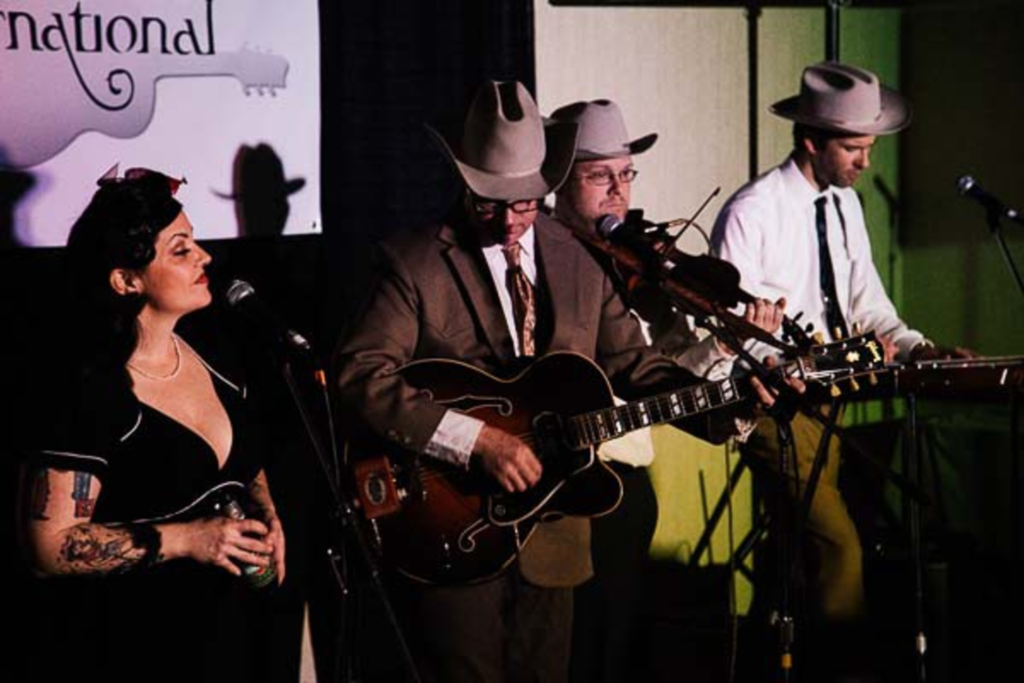 Tucked away on the far end of the first floor was another slew of conference rooms, and I stumbled into one where the Phantoms of the Opry were playing. This quintet – four dudes with ivory wide-brimmed cowboy hats and one burlesque babe with a flower in her hair – was an unexpected delight. Their music is all western swing – it’s hard to tell sometimes if they’re playing originals or old country standards, but either way, George Jones would be proud. 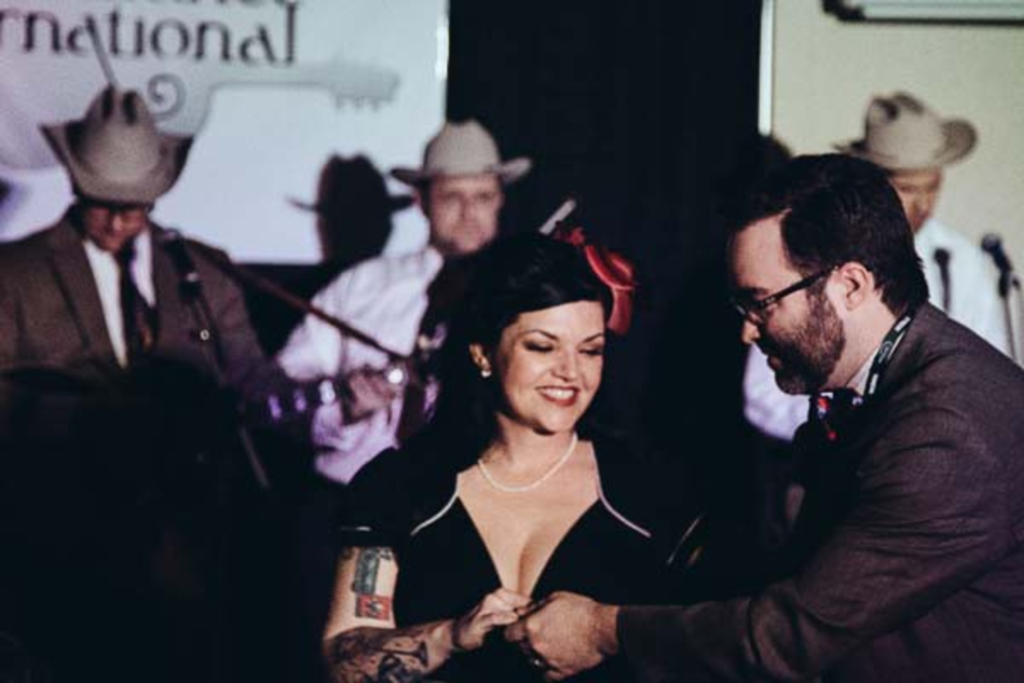 Kimberly Szepski, the singer and resident eye candy for the band, sauntered down the aisle and started waltzing by herself until one gentlemanly spectator joined her.

[page]Back upstairs, one of Kansas City’s favorite legends, Howard Iceberg, was playing to a pleasantly fleshed-out conference room. He peered out mildly at the crowd, a friendly smile on his face. Iceberg’s true talent is in his distinct and unusual voice: It’s cracked and rough, like dry toast or used sandpaper. There is little beauty in it, but it soothes and comforts in a way that is hard to find. 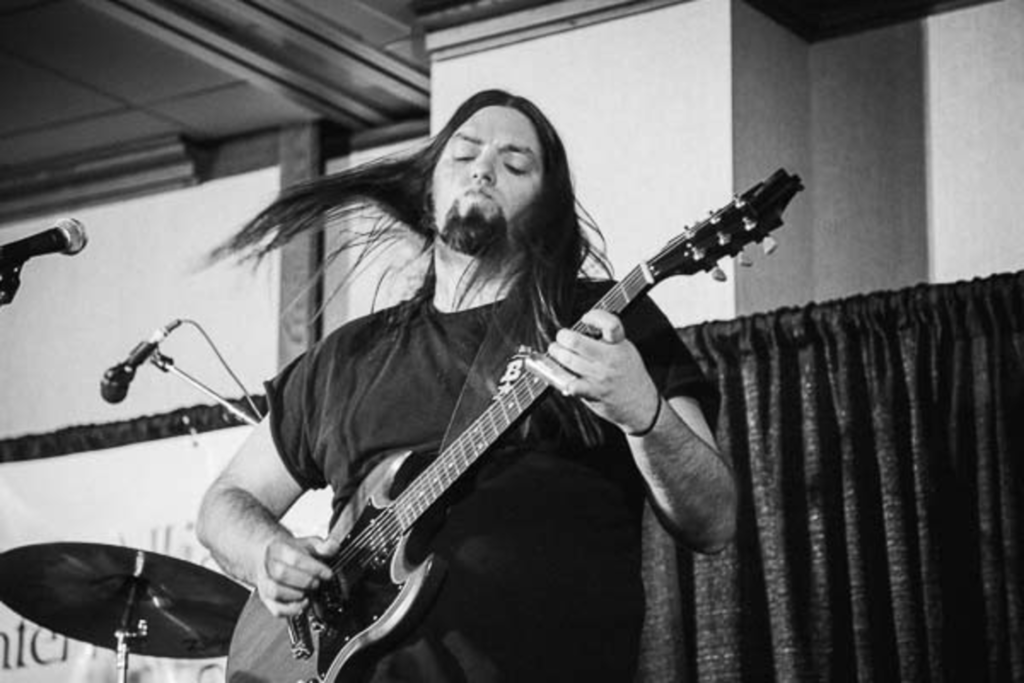 The Coyote Boogie Band, from Gardner, Kansas, rocked out with some impressive blues guitar riffs, but perhaps nothing was more impressive than frontman Coyote Bill’s guitar faces. His hair flowed wildly, and he looked ready and willing to rip apart his strings.

“I love that guy,” gushed a rosy-cheeked folker as she skipped out of the conference room.

As I found some locals pushing in and out of elevators, I realized that there was more to the conference than just the official showcase for the evening. Three floors of private showcases, set up in hotel rooms, were also taking place – and my badge would get me into those (although, to be honest, I didn’t see anyone really monitoring who had a badge and who didn’t). I followed a group upstairs and was treated to an intimate session of almost-acoustic performances from a handful of bands. I could barely find their names to write down, but this intimacy – peeking into a room, dipping my hand in a bowl of complimentary candy, sitting cross-legged on the hotel carpet as some troubadour laid bare his soul before I shuffled on for a new sensation – is priceless. 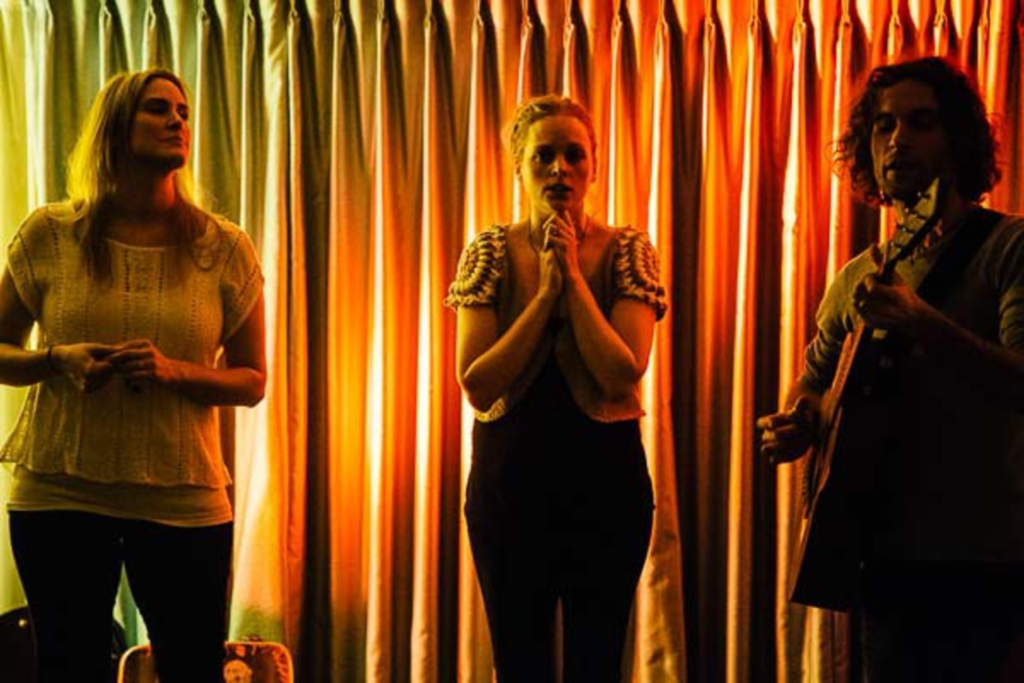 On my way back downstairs to catch Betse Ellis, I passed a musician by the equipment check room. She looked kind of joyously frazzled. “I’m so overwhelmed right now, I’m barely functioning,” she moaned to a friend standing next to her. It would be another hour before I was echoing her sentiments.

%{[ data-embed-type=”image” data-embed-id=”57150c0f89121ca96b958498″ data-embed-element=”aside” ]}%
Ellis was a thrill. But she always is. She dominates on the fiddle – an underrated and hugely complicated instrument, somehow always construed as the redheaded stepchild of the violin. With Ellis, though, the fiddle is more than an instrument; it is an extension of herself. Mark Smeltzer of both Freight Train Rabbit Killer and the Rural Grit All-Stars danced merrily off to the side, wearing a three-piece suit with miniature hand-painted rabbit heads on it. I would be lying if I said I didn’t want to commission such an ensemble for myself. (Smeltzer later told me – quite proudly – that he painted all the bunnies himself.)

The final band of the night – my night, anyway – was the New Riddim. It was the first time I’d seen these guys perform, and I’ve since decided that calling the New Riddim a ska band or a reggae band is simply inadequate. Among the seven members, they have all the regular band fixins, plus a trombone, trumpet and saxophone. And they tear into their songs with a sort of unadorned fearlessness. 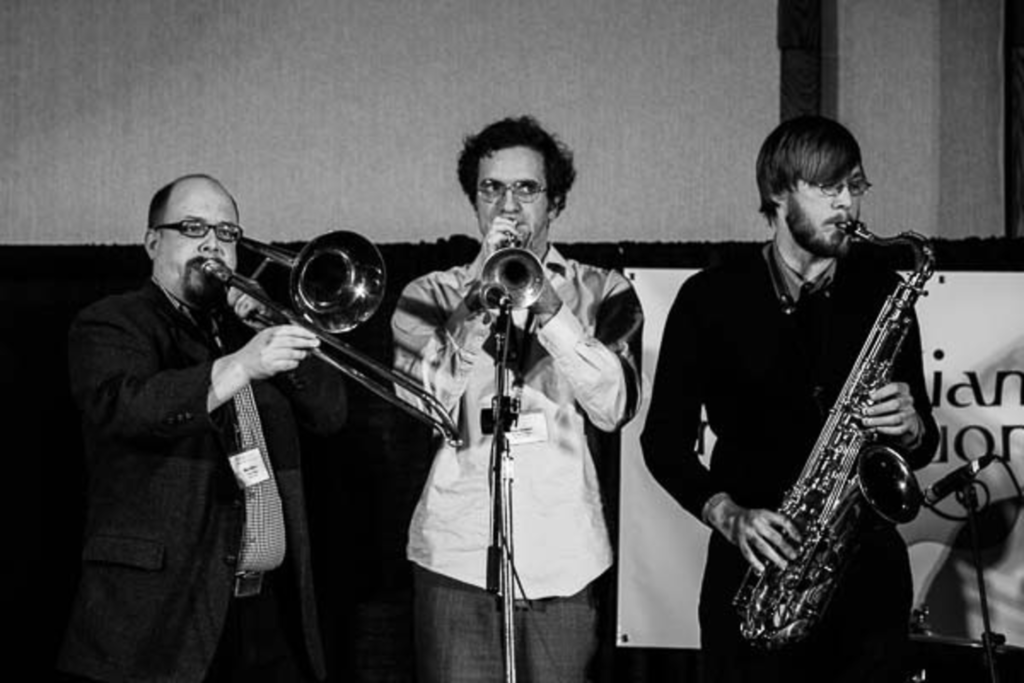 As I left the New Riddim, I had every intention of continuing on – going back upstairs or finding the next act on the schedule. There were plenty of acts that I missed – I’m still sorely disappointed that I somehow let Katy Guillen and the Girls’ set fall through my fingers – and I wanted to make sure I capitalized on the evening.

“I should go home now, but I really don’t want to,” said a friend of mine as I passed him in the hallway. He looked like a kid who was relishing an extended curfew. I realized, then, that I wouldn’t be able to conquer the conference any more than I already had, and I trailed off toward my car. On my way past the Brasserie, one of the bartenders swung the double French doors closed on a restaurant full of people with a satisfied relish.