The imaginative A Doll’s House, Part 2, at the Unicorn, also has some sequel blues 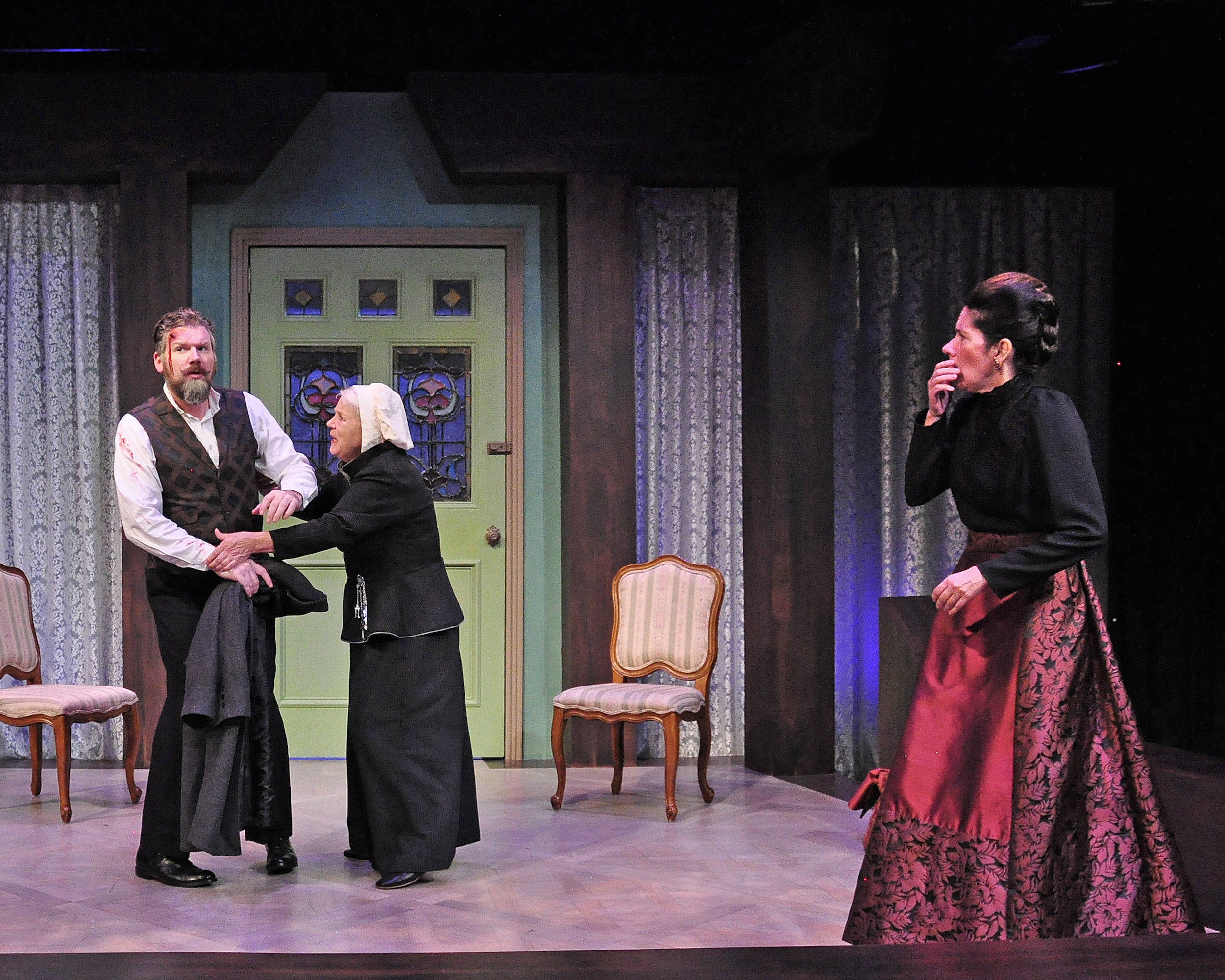 It can’t be fun to find your estranged wife of 15 years suddenly standing in your parlor. But that’s the start of the Unicorn Theatre’s A Doll’s House, Part 2, an engaging but complicated sequel of sorts to Henrik Ibsen’s A Doll’s House.

Do we need a Part 2? Playwright Lucas Hnath has conceded that adding to Ibsen’s masterwork is an audacious undertaking, but that’s also what first attracted him to the project. Ibsen’s forward-thinking play of 1879 was a bold statement at the time, and it can still draw OMG reactions from first-time readers and playgoers. That the action at the end of Ibsen’s work is still considered controversial, or shocking, may be one of Hnath’s points in this newer play, which debuted on Broadway in 2017.

For those unfamiliar with the 19th-century classic, young wife Nora walks out on her husband Torvald and their three young children to begin a life on her own. It’s a surprising end and, to some, a justifiable one. And that’s it—we don’t know what becomes of her once she exits the house and shuts the door behind her.

A Doll’s House, Part 2 was the most produced play across the country in the 2018-19 season, according to American Theatre magazine. Could this reflect discomfort with the original work’s ambiguity or just rampant curiosity about what became of Ibsen’s singular Nora? Hnath’s Part 2—which received a Tony nomination for Best Play; Laurie Metcalf won the award for her portrayal of Nora—tackles this question for the audience early on.

“I’m not the same person who left through that door. I’m a very different person,” Nora (Manon Halliburton) says to her former nanny, Anne Marie (Kathleen Warfel), when she shows up at that door. Nora asks her to guess what she’s been doing all this time. (The script even makes a guessing game of it, perhaps for our benefit.)

Nora is doing OK. In fact, she’s doing pretty great, but now this older, more self-assured woman has arrived with a purpose in mind. After 15 years, she’s still trapped. Torvald (Logan Black) never went through with filing for divorce, and that has created some significant consequences for both her and Torvald (plot points I won’t divulge here).

“I think there’s something in our time and place and culture,” Nora says, “that teaches us to expect and even want for women who leave their families to be punished.” Nora believes those attitudes are bound to change in another 20 or 30 years. But they haven’t yet, and A Doll’s House, Part 2 seems written with that perspective in mind.

Hnath’s dialogue is sharp and insightful, filled with parallels to Ibsen’s work, and instilled with humor. The language, for 1894 (lovely period costumes by Sarah M. Oliver), is modern, including our now common use of expletives, and that anachronism pops from the nanny’s mouth with comic surprise (on which Warfel delivers). But as the Unicorn show draws on, it doesn’t readily reveal this script’s wit and irony.

The 90-minute one-act is divided into five sections that segue smoothly into one another. (The title of each section is reflected in the stage floor—lighting by Nicole Jaja—but isn’t visible to the entire audience.) The small stage is nearly bare but for a couple of side chairs and a side table, and audience seating surrounds it on three sides, which too often puts the actors’ backs in view.

For all its compelling repartee on relationship dynamics, this production (directed by Darren Sextro) sounds more like a discourse on marriage than an uncomfortable and awkward family reunion. The small ensemble does good, tight work, but the character of Nora, so central to the story, appears more antihero here than hero—aloof, unlikable, one-note. Torvald (portrayed with sensitivity by Black) and Emmy, the couple’s now-grown daughter (Marisa B. Tejeda, a UMKC MFA candidate), seem to solicit all our sympathy.

It’s a disappointing take on Hnath’s play and Nora’s story, which are more complicated. There’s something to be said for a bit more ambiguity.