The Hunt is dumb, troubling fun not worth the film’s controversy 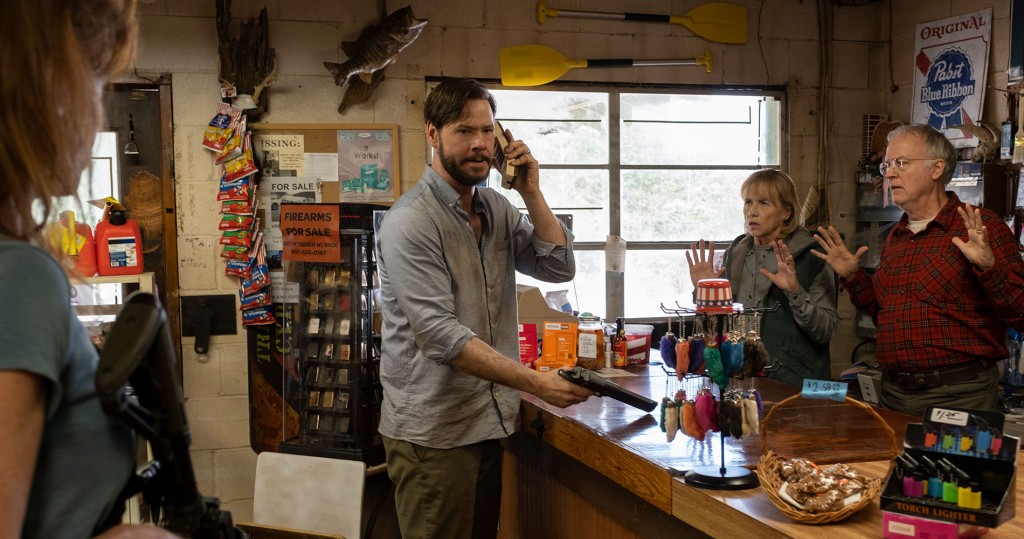 Editor’s note: The Hunt has left theaters and is streaming on-demand now.

Back in early fall, the trailer for Blumhouse’s The Hunt hit the internet, and the internet, predictably, lost its ever-loving mind. The trailer proposed a “Most Dangerous Game” scenario where wealthy liberal elites hunted down working-class “deplorables” for sport. Twitter is the place where satire goes to die, and the heated reaction–coupled with a truly tragic national event that made the film’s planned September release feel inappropriate–resulted in the movie’s cancellation. For a while, anyway.

In the spring, the studio released a new, slightly more contextualized trailer, one created to let everyone know “don’t worry, it’s not what you think it is.” Blumhouse even managed to use the earlier cancellation to the film’s advantage–“the most talked about movie of the year is one that no one’s actually seen” makes for one hell of a tagline.

So, now The Hunt is here. Was it worth the hype? Worth the anger? Well, yes and no. Craig Zobel, Nick Cuse and Damon Lindelof’s movie is a straightforward exploitation action-thriller in the tradition of such pulpy classics as Turkey Shoot, Surviving the Game and Hard Target. The filmmakers have given the classic setup a timely new context, to keep things fresh. But while it’s plenty entertaining, releasing a movie this charged into a climate this polarized is a tricky proposition, one that requires a little more verve to navigate than The Hunt has.

For all the context the studio tried to give the movie ahead of its adjusted release, The Hunt is basically exactly as advertised. It’s about a group of wealthy leftist elites who capture a dozen folks who they’ve targeted for various reasons, mostly either perceived slander or widely-advertised nastiness–to give you a sense, their prey includes a conspiracy theory podcaster, an online troll, several gun nuts and a big game hunter.

These captives are drugged, released into the wilderness and hunted down by their captors, all of whom are just as stereotypically awful as the people they’re hunting. While the hunted are intolerant jerks with wackadoo beliefs, the hunters are insanely rich, out-of-touch and overly PC. It’s like if you pointed the two worst fringes of online public discourse at each other and gave them each a cache of weapons.

As an exploitation movie, The Hunt is well-executed (pardon the pun) and lots of fun. It’s gory and nasty and pointedly funny, announcing its intentions from the word “go.” Cuse and Lindelof’s script brings up characters and plotlines, only to have them messily destroyed seconds later. Betty Gilpin’s heroine Crystal is also a great creation. She’s capable and strong, and cares precisely not at all about what’s happening or why, just how she can practically escape the situation she’s been placed in. Not to spoil anything, but if The Hunt makes any point at all, it’s that Crystal’s detachment is perhaps what will save us in the midst of the stupidity of public discourse.

In a formal sense, The Hunt is a well-made movie. But is it a necessary movie? That’s where the problem lies. Exploitation movies don’t have to be necessary. They aren’t meant to be socio-political commentary. They’re meant to be cathartic, dumb fun. The Hunt is an equal opportunity offender, interested in skewering the fringe-dwellers on both sides of the liberal-conservative divide. If that’s what you’re into, congratulations, you’ll have no problem. But there’s a worthy question to be asked about whether it’s kind of irresponsible to release a movie where angry political extremists are tearing each other apart–literally–in a climate defined by rage and violence that always seems on the edge of boiling over into something real (and frequently does).

Zobel (who directed Compliance and Z for Zachariah, along with several episodes of Lindelof’s The Leftovers), Cuse and Lindelof have all proven themselves to be thoughtful writers capable of nuance and consideration when it comes to these subjects. They are capable of work that’s equally intelligent and entertaining. It just feels like they decided to let all that go and have fun on this, which, given the subject matter, is precisely the wrong thing to do. That lack of thoughtfulness here feels more than a little disappointing.

Ultimately, The Hunt has as much power as you’re willing to give it, and it’s not really worth the energy. It’s not meant to hold the weight people want to give it. It’s a good time, if you can overlook some of the more problematic elements of its plot and characters. Usually, that’s not much of a problem. It’s just that we’re so tied up in exactly the kind of rhetoric this movie wants to destroy that it’s pretty much impossible to do that with this movie.