The forgotten legacy of Muriel Kauffman’s dedication to the arts, sports, and KC’s sprawling foundation 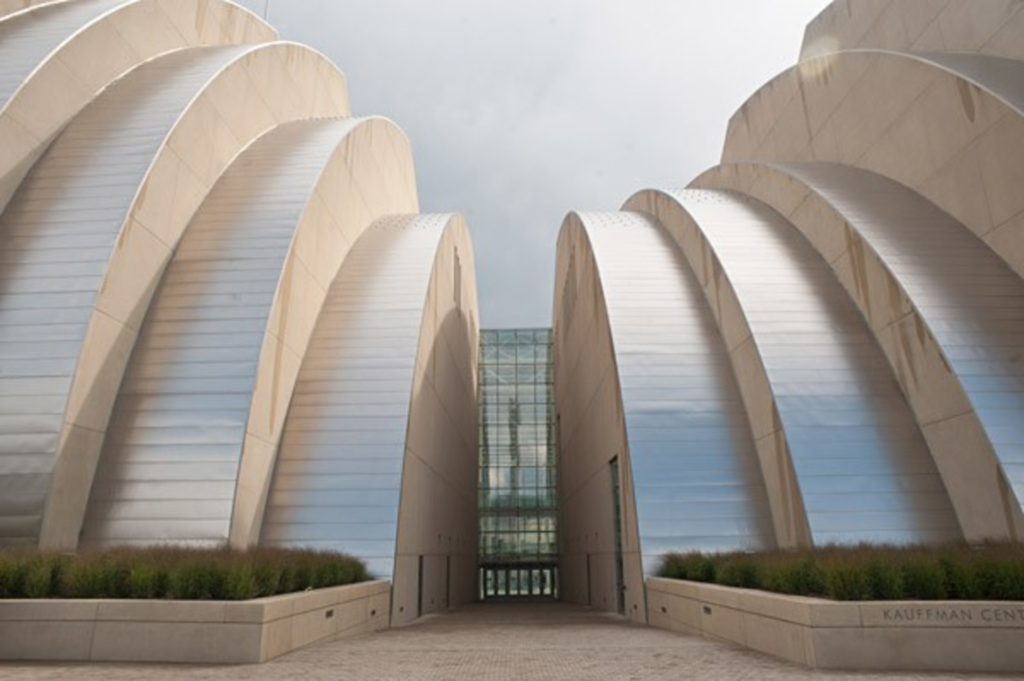 Kauffman Center for the Performing Arts.

The Kauffman name resides in multiple places across the KC Metro. Nearly everyone recognizes Ewing Kauffman as the owner of the Kansas City Royals baseball team, but many Kansas Citians don’t know of the story of his wife, Muriel.

Known as “The First Lady of the Royals” as well as the “The Blue Lady,” Muriel Kauffman was more than a wife and mother; she was an intelligent, outspoken, vivacious, friendly, and compassionate businesswoman and philanthropist in her own right.

Muriel’s Kauffman’s father helped her establish a small business when she was only 16. She later attended McMasters College and earned degrees in economics and law. After her father’s unexpected death at age 50, she took over her father’s businesses, which included an insurance company, real estate holdings, and his practice.

Muriel and Ewing Kauffman first met in March 1961 at an international art conference at the Miami Beach Hotel in Miami, FL. Muriel, recovering from a car accident, was attending alongside her mother, while Ewing was in Miami on a business trip representing his company, Marion Laboratories, which he had begun in his basement in 1955.

Muriel Kauffman was also a widow twice over when they first met, and according to both Muriel and Ewing, neither liked the other upon their first meeting. The couple went on a few dates while they remained in Florida and eventually went their separate ways. A few weeks later, Ewing flew to Toronto expressly to be with Muriel and declared his love for her before the end of his two-week stay. Less than a year later, they were engaged. Muriel and Ewing married in Prairie Village Feb. 28, 1962.

Having an economics degree and successfully running her own business for several years, Muriel became Ewing’s business partner and life partner. She became Treasurer and President of Marion Laboratories. She also changed the company’s hiring practices and decorated the offices.

The league approached several of Kansas City’s most prominent and affluent business owners to be the new franchise owners. Ewing Kauffman received one such offer and nearly declined, but Muriel convinced him to purchase the team in 1968.

Ewing was also married once before, and already had a son, Larry Kauffman, with his previous wife. Ewing and Muriel had a daughter together named Julia Irene Kauffman. Larry would follow in his father’s footsteps as an entrepreneur and business owner, serving on the Royals board of directors. Julia would follow in both her mother’s and father’s footsteps. She earned a degree in classical piano from the Royal Conservatory at the University of Toronto and a doctorate of music from UMKC.

She also served on the Royals board of directors and on the boards of several arts foundations in KC. She was the chairman and CEO of the Muriel McBrien Kauffman Foundation after her mother’s death.

The Muriel McBrien Kauffman Foundation, which has since changed its name to the Muriel McBrien Kauffman Family Foundation, has a continued effort toward the flourishment of the arts in KC and funds multiple arts organizations such as Kansas City Symphony, the Lyric Opera of Kansas City, the Kansas City Ballet, the Harriman-Jewell Series, the Kauffman Center for the Performing Arts, the Nelson-Atkins Museum of Art, UMKC Conservatory of Music, Kansas City Repertory Theatre, ArtsKC Regional Arts Council, and the Kansas City Art Institute, along with several similar, smaller organizations.

Ewin Kauffman died Aug. 1, 1993. The next year, Muriel Kauffman began campaigning and fundraising to create an art performance center. This project would take several years, and sadly Muriel would never see its completion. Muriel Kauffman died March 17, 1995 in Rochester, MN. Formal planning for the performance center did not begin until 2000, and the Kauffman Center of Performing Arts would not open until 2011.