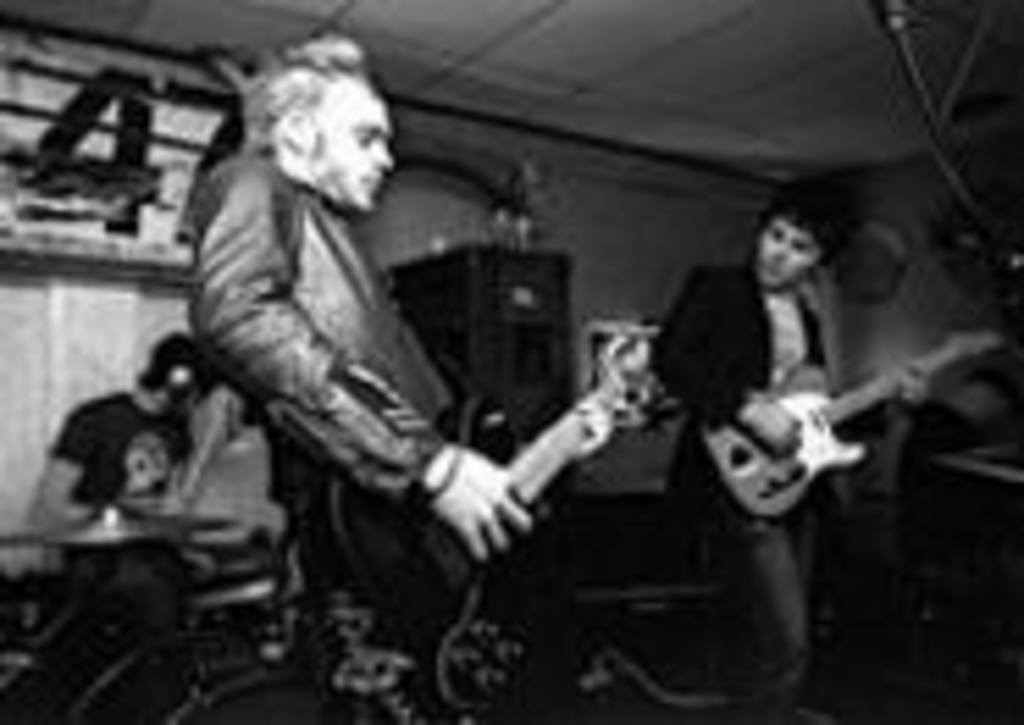 Ten … nine…. Please, please tell us you’re not at home while the clock’s ticking. Not bidding adieu to the foul Year of Our Lord 2003 on the couch. Not munching stale popcorn. Not watching Dick Clark hyperventilate you into January 1. Eight … seven … six…. So that 2003 diet ended at 3 a.m. last New Year’s Day when you went on a bleary-eyed Taco Bell run. So you weren’t nicer to your sister, never fixed the washing machine and have yet to visit your ailing grandmother. If you’re resolving to see more kick-ass local shows in 2004, now’s your chance to get a jump on a resolution you just might keep. Five … four…. Here are three New Year’s Eve shows that will hit you like a Brick, rock you like a Hurricane or merely … ah, hell. You can’t do much with Bottleneck. Whatever. Before you vomit your way into a new year: Three … two … one….

Remember Season to Risk‘s last shows? The ones where the thirteen-year-old group split its daunting discography in half, thrashing through early favorites with its initial lineup the first evening and saluting its melodic yet malevolent latter-day work the next? That’s last as in most recent, not final, because Season to Risk is well-forked but not done. Its “leave of absence” will have lasted from late June to December 31. On New Year’s Eve at the Brick, the champ comes out of retirement to batter the bejesus out of the year’s waning hours. This isn’t just a nostalgia trip, either — S2R plans to unveil plenty of fresh material, which should inspire optimism about other hiatus-snapping gigs in the not-too-distant future.

“[Guitarist] Duane Trower said he would only play if we wrote some new songs,” singer Steve Tulipana says. “So it goes. We’re really enjoying it after so much time away.”

But old acquaintances should not be forgot, and the band’s chaotic classics are still scattered through the set list. Plus, opening acts Dirtnap, Onward Crispin Glover and Stella Link all include active S2R members. But even though these guys haven’t shared a stage in a while, they shouldn’t be rusty when the time comes to squeeze the last gooey dollops out of the titanic toothpaste tube known as 2003.

The People and Elevator Division

There are worse places to be than the Hurricane on New Year’s Eve. In an actual hurricane for instance. Or a prison cell in Kazakhstan. A brothel in Tijuana. In your living room playing pinochle. Triple bonus points for you that the Hurricane is doubling your pleasure and doubling your fun by hosting two bands in the upper echelon of area indiedom to ring, ring, ring in 2004.

The People possesses one of the dullest monikers since the Band, but its peeps more than make up for their bland brand with some riveting rock. Besides, the quartet is undergoing an upgrade. In with an Astralwerks record contract, out with the drab band name. In with national exposure, out with mere yokel status. In with a new album, out with … uh, their old album? That’s all we got. No word yet on what the group’s new name will be, but as the Band Soon to Be Formerly Known as the People edges into the spotlight beyond our humble environs, it’s almost a certainty that the new name will be one you’ll remember.

The Elevator Division isn’t far behind, either. The band has inked a contract of its own (with Second Nature) and is gearing up to release a fresh full-length come 2004.

As if reporting that both of these hometown ensembles are about to do good in one room isn’t enough, we’ll throw up-and-comer Red Authentic in for free. What a bunch of sweethearts we are.

For lonely singles, New Year’s Eve can be a bitter affair — the kind of night that makes you want to grab a shotgun and a six-pack and see where they lead. Split Lip Rayfield understands. Featuring a back catalog stocked with songs about gin-soaked vengeance, tequila-driven lust and vodka-fueled prison bids, the Kansas-bred bluegrass-punk outfit offers a musical antidote to the troubled life. Or at least a good soundtrack.

The hard-touring quartet regularly sells out multiple nights in the area, and with good reason. (Its New Year’s Eve gig is at the Bottleneck.) Revered for its ability to whip audiences into a drooling, dancing mass, the group’s buoyant live shows have gained a mythology of Olympian proportions. Blending backwoods bluegrass, country-tinged rockabilly and honky-tonk murder ballads with equal abandon, Split Lip is as experimental as it is irreverent. Relying on an old-fashioned setup of mandolin, guitar, banjo and a standup bass concocted from an old gas tank (dubbed “The Stitchgiver”), these tattooed Bloodshot Records vets play so hard, they practically levitate. Match that sonic cacophony with some of the meanest four-part harmonies this side of a New York street corner, and you have music that goes down smoother than a jug of corn whiskey on a Sunday afternoon.

Split Lip went on hiatus following the exhaustive tour for 2001’s appropriately titled Never Make It Home but returned to full-time picking and sinning last summer. The band spent the second half of the year honing its live set alongside under-the-radar notables such as the Waco Brothers, Los Straitjackets and Wayne Hancock, and 2004 dates are already scheduled throughout the United States and Europe. Infamous for setting traditional tunes to tempos that would make Slayer reach for the nearest oxygen tank, Split Lip is guaranteed to give you a terminal case of hillbilly fever — assuming you don’t have to kill someone to get tickets.