The Fate of the Furious fetes itself infectiously 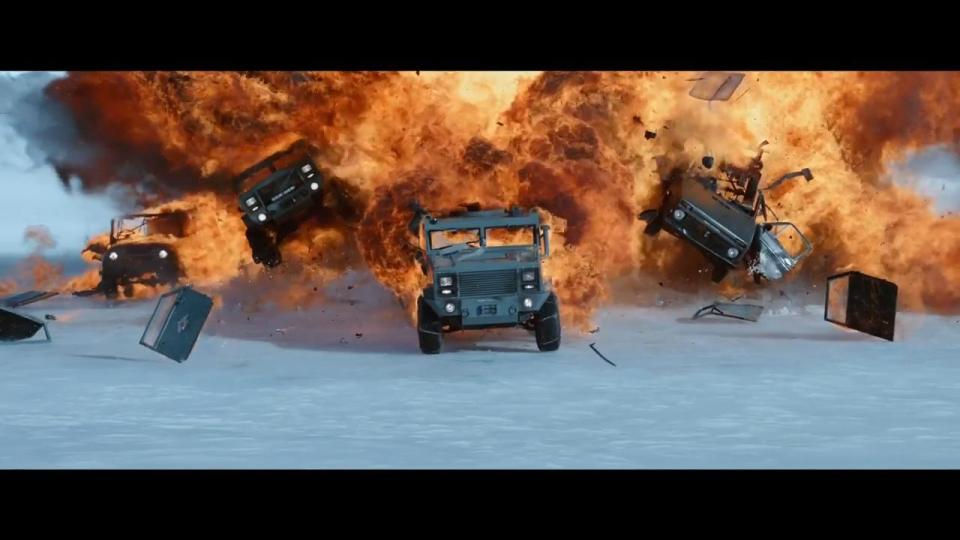 Ever since 2011’s next-level sequel Fast Five, each movie in the Fast and the Furious action franchise has tried to top the last in terms of jaw-dropping stunts that defy not only logical expectations but also the laws of physics. The Fate of the Furious, the series’ eighth installment, falls just short of doing that — which is really saying something when we’re talking about a movie in which cars race over ice as a nuclear submarine surfaces behind them.

But The Fate of the Furious tops its predecessors in a different way: by applying that familiar, reality-confounding aesthetic not to the action but to the characters.

Returning screenwriter Chris Morgan again uses soapy melodrama to test the bonds — and the code of honor — within the “family” of street-racing misfits led by thick-headed former criminal Dom Toretto (Vin Diesel). But Fate relies as never before on whipsaw double-crosses, eye-rolling character motivations and forehead-slapping coincidences. The result tests the patience like nothing short of a Diesel crying scene.

Yes, I know: The plot machinations of the Fast and the Furious movies have always been silly. But they’ve also been relatively easy to buy, provided you swallow the franchise’s earnest sentiment. This hasn’t been an especially tall order, because even as the action scenes have grown hilariously over the top, the characters have remained reliably human (other than being impervious to the effects of car crashes). But Morgan this time inserts too many perfunctory characters and asks us to keep track of motivational arcs that veer around like a Mustang bought on Craigslist.

Still, there’s an argument to be made that Morgan hasn’t just given up trying to make sense but is instead brilliantly extending the meta-reality of Furious 7’s moist-eyed ending. The last moments of that movie paid touching tribute and farewell to Paul Walker, who died before shooting was complete, and whose loss lent actual weight to 7. Perhaps Morgan took a cue from that surprisingly successful moment and figured there was no downside to giving a Fast audience more, more, MORE — adjusting what plot there is to the same fantasy logic that governs the action scenes.

This is 100 percent justifiable. And it makes Fate a great deal of fun. 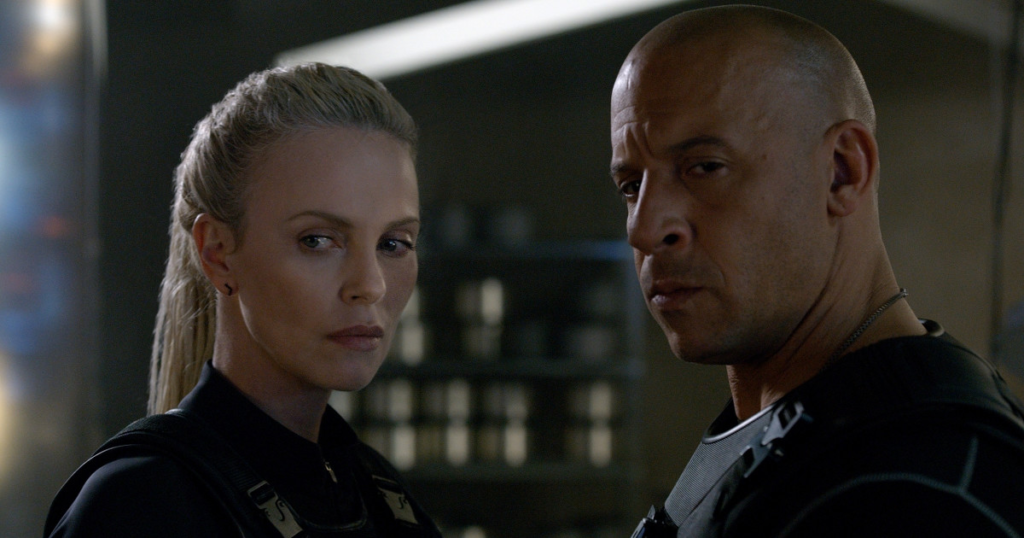 Examined through the lens of “more, more, more,” it makes perfect sense, for instance, that cyber terrorist Charlize Theron keeps talking arbitrarily about fate. She is basically pronouncing the vanity-plate-ready alternate title of the movie she’s in: F8. Meta! And when Dwayne Johnson puts an enormous dent in a steel wall with his bare fist and throws three people through a doorway with one swift motion, well, isn’t this exactly what we want from the Rock? How about that, plus all kinds of so-bad-it’s-good tough-guy talk, delivered with unalloyed glee? Yes! (Jason Statham gets his own bonus round in the meta sweepstakes, channeling the oblivious super-agent he played in the 2015 comedy Spy for a very funny climactic action scene that can be taken only as parody.)

As for Dom, his hard-to-believe moments (which Diesel plays with the same dead stare that has always constituted his technique) work because they (a) kick the plot into gear and (b) set up a sweet callback during the climax. Forgivable!

Yes, I realize it is a cop-out to set aside criteria such as believable characters and coherent story in order to rationalize a view of The Fate of the Furious as a “successful” film. But successful it is, and I’ll tell you why. With Morgan having abandoned any notion of an authentically dramatic scenario to motivate the action, then the metric that matters when judging Fate is simplicity itself: How effectively does it deliver thrills (cheap and conspicuously uncheap, earned meta and easy fourth-wall near miss)? Call it the Lt. Frank Drebin Test: No one interrogates plot or character in The Naked Gun, yet that film elates the viewer with its fast and furious deployment of gags. Fate stands up to the Drebin Test and then some: Its elation factor is ridiculously high.

I’m not saying it’s perfect. At least half of the tough-guy insults fall flat, Kurt Russell is woefully underutilized, and 136 minutes is at least 20 too many. But there’s a genuinely funny unexpected cameo, the hand-to-hand combat satisfies, Chris Bridges and Tyrese Gibson again provide perfectly light comic relief, and there are two audacious action sequences for the books (although neither is as sublime as Furious 7’s three-skyscraper jump through Abu Dhabi’s Etihad Towers).

Everything is staged by director F. Gary Gray very professionally, and it looks like the actors and the crew had a great time hanging out together, a bunch of beautiful people, laughing and crashing cars. It took Walker’s unexpected death for this franchise to approach anything resembling an emotional moment, and depth is unlikely to threaten this series again. But that’s OK. Joy is an emotion, after all, and there’s a solid 70 or so minutes of mega-budget big-screen joy in The Fate of the Furious.