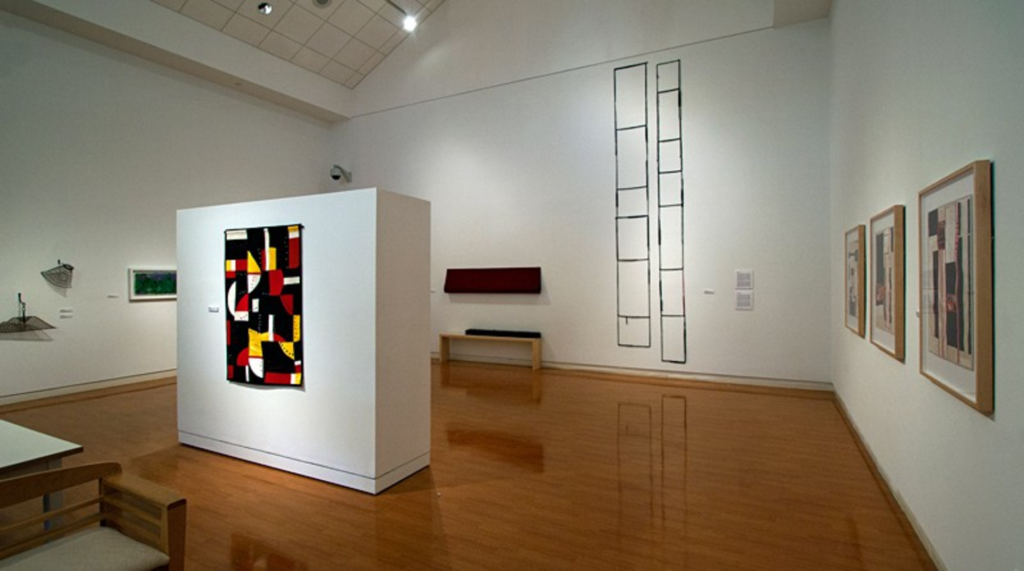 Group art exhibitions created specifically to highlight the achievements of women (or any other population subset, for that matter) occupy shaky existential ground. Segregating women into their own exhibitions forces them further outside a mainstream position. And a show title like Women to Watch 2012: Focus on Fiber & Textiles doesn’t help. That cumbersome name has a vaguely yearbooklike feel, as though one might open the brochure to find head shots of participating artists rather than photos of their works.

But in today’s war-on-women media climate, where reproductive rights and equal pay are still hotly debated, maybe some female solidarity is what we need. And it’s a testament to the smarts, skills and talents of the exhibiting artists that this show isn’t buried under the weight of politically charged activism and the loaded symbols of its focus medium. Instead, the work is fresh and conveys the distinctive individual sensibilities and interests of each artist, despite some broad themes.

Sponsored by the National Museum of Women in the Arts, a Washington, D.C.–based institution dedicated to the artistic achievements of women, Women to Watch features pieces by five local artists who create using the requisite media. (A single artist from the group represents the region in a group exhibition in Washington this fall.)

The NMWA’s membership brochure (available in the Epsten Gallery) relates the tale of a trip to Europe that Wallace F. Holladay and Wilhelmina Cole Holladay took in the 1960s, when the couple first encountered paintings by 17th-century Flemish artist Clara Peeters. As the NMWA’s development department tells it, upon the couple’s return, they “discovered that none of the leading art history textbooks referenced Peeters or any other female artist.” Wilhelmina established the museum in 1981 as a tool to develop a revisionist history of art — one that included women.

Fiber arts, in particular, played an important role in that expanded version of art history. Textile art, long categorized as a craft (and, therefore, held in lower regard than painting or sculpture), was traditionally women’s work. With their rich history and politically loaded status, fiber and textiles proved to be effective media for artists looking to challenge traditional roles, and became fertile ground for scholars seeking women whose artistic output had escaped notice.

Kincaid’s beaded re-creations of nature photographs dazzlingly reflect the same gallery light that Gross’ woolly felt absorbs. Her delicate portraits of the fleeting beauty of blossoms and of sunlight flickering through branches are pure pleasure to take in.

Krumm, whose work travels to Washington in the fall, presents sculptures that together form a study in opposites. She crochets thin metal wires to create an intricate fabric (like a chicken coop), which she uses to shape airy forms supported by heavy books, blades and other found-metal objects. The results are simultaneously whimsical and sinister, sturdy and fragile, comforting and discomforting.

The complexities inherent in Krumm’s work reflect the vibrant, varying nature of the other pieces on display. This is artwork that overcomes the bland, unfocused rubric imposed on it by the exhibition’s name. There’s more here than “women” and “fiber” and the quotation marks around those words.