The Drugstore, a midtown space for Kansas City’s young and emerging artists, will close 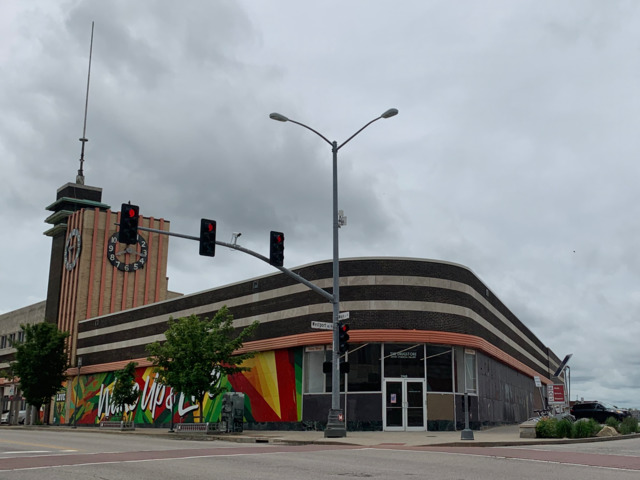 The Drugstore, a collaboratively run studio space at the corner of Westport Road and Main Street, is shutting down after seven years. The 26 current resident artists will pack up and leave over the next few months.

Redeemer Fellowship, a local church and landlord to the Drugstore, plans to put the iconic Art Deco building — orange trim, clock tower — up for sale.

“We simply lack the capital in our ministry budget to invest in developing or improving the facility in the way we think the neighborhood and community deserves,” Andy Bean, the church’s director of operations, tells The Pitch.

Since 2012, The Drugstore has served as both an incubator for emerging artists and a community hub. Its gallery has shown local and visiting artists, and the space has hosted events with local organizations like Front/Space’s Hot Hands and KC Urban Potters’ Midwest Pottery Fest.

Redeemer bought the historic building at auction; at the time, the church was leasing just the parking lot for its Sunday morning services. Church leadership was surprised to win the bid, Bean says, and decided to use the space to further the ministry’s mission of cultural renewal.

“Our heart was to have a space that we could give as a gift to the arts community, rather than just lease it to somebody,” Bean says. “We’re a church — we’re not particularly interested in being in the landlord business.”

Redeemer does own about a dozen other rental properties in the area, though, which Bean describes as an attempt to “raise the water line of this [Westport and Main] corner.” He says the church does not currently have plans to sell any other properties.

The Drugstore is huge, and the mortgage and utility costs are high, Bean says — about $80,000 per year when added up. That, plus the increasing costs of maintaining a deteriorating structure built in 1934 — leaky roof, failing HVAC, crumbling facade — is what ultimately convinced Redeemer its money would best be spent elsewhere.

The building will be on the market sometime in the next year. Bean says the church will be careful in selecting a buyer that it feels will bring something positive to the neighborhood.

“We love this neighborhood — we’re invested on this corner,” he says. “We want to make sure that whatever that building looks like in the future is something that is good for our city.”

Meanwhile, some Drugstore artists are exploring potential ways for the spirit, at least, of the Drugstore to live on — a new home, maybe a new 501(c)3. But it’s early yet.

“It would be nice to find a building that could support 100 artist studios,” says Andy Erdrich, a longtime resident artist at the Drugstore. “But that’ll take time.”