Be kind and rewind. 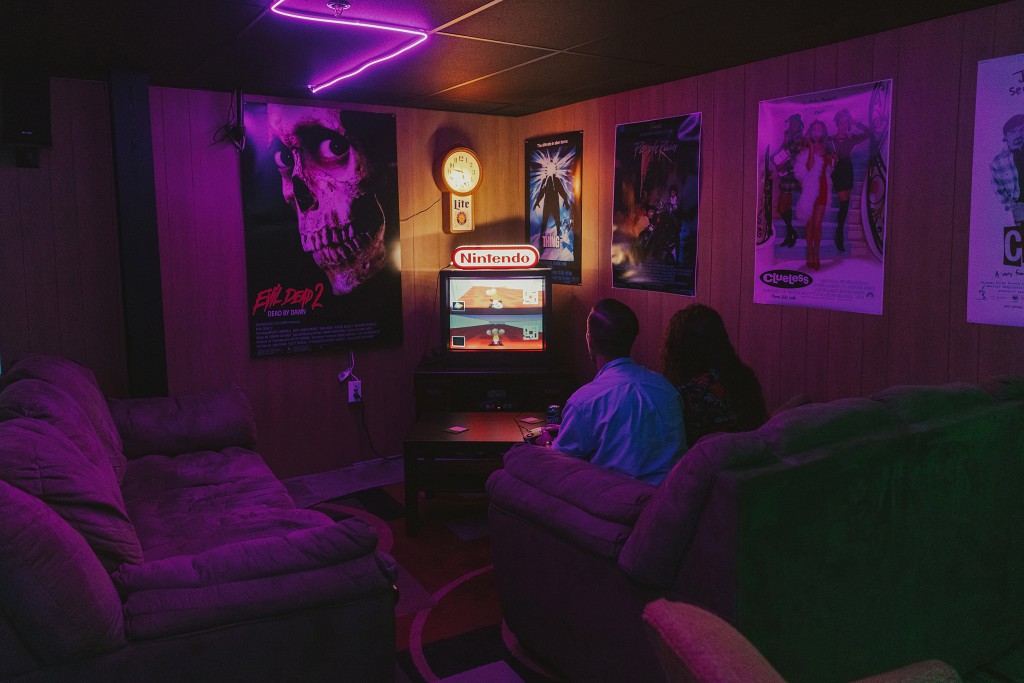 Take a stroll down a North Kansas City alley behind a strip of Armour Rd. businesses, and just past a set of dumpsters there’s a door with a Blockbuster-esque logo that welcomes the weary with a portal to a simpler time.

Rewind is the ‘90s basement dive bar and movie rental spot we didn’t know we needed. A few steps downstairs reveals the basement hangout of your coolest would-be friend from when the internet was delivered in the mail on a CD.

“We wanted to create a true analog experience,” says owner Adam Roberts. “Some people miss this type of thing and some haven’t experienced it at all.”

Guests are greeted with a cavalcade of ‘90s artifacts as decor. Some may notice the Clerks, Jurassic Park, Evil Dead II, or Rushmore posters while others pick up on the Saved by the Bell-themed wall, troll dolls, and analog stereo blasting of early Mobb Deep, Gin Blossoms, and Beastie Boys in the background.

Offset from the basement of forgotten pager codes is a room full of 2,000+ VHS and DVD selections that would make Hollywood Video blush. The collection features films you often can’t find on a streaming service, plus specialty director’s cuts, cult-classics, and rare horror films.

“The movies for rent are from my personal collection,” says Roberts, who also owns the four-screen revival movie house Screenland Armour Theater, just upstairs from Rewind.

Rewind offers a flat-rate monthly subscription to rent and return selections for the old-souled cinephile. They will also loan out VHS and DVD players to those who’ve shed the antiquated movie technology.

The Adult Capri Sun is the star of the menu served in a plastic pouch punctured by a straw and featuring a rotating flavor profile—currently its a straightforward strawberry lemonade flavor fortified by local vodka.

“Rewind isn’t a swanky cocktail speakeasy, and our drink offerings reflect that,” says Roberts. “Our biggest concern is creating a good hang.”

Boozy Capri Sun in hand, a look into the land before Al Gore won the popular vote shows old couches, loveseats, and chairs pointed at tube televisions and welcoming retro gaming consoles. Groups can grab a set of controllers and a game free of charge from the bar.

Friends can lounge and jog their memories on the finer points of PS1, Sega, N64, and SuperNintendo. The blast from the past continues as drinks are rested on floppy disk coasters while dueling pals in games like Golden Eye, Twisted Metal, MarioKart, Tekken, NBA Jamz, NFL Blitz, and Mortal Kombat.

“Every detail was curated, from wood-panel walls to the period foosball table,” says Roberts. “We didn’t want it to be overly kitsch like pop-up bars tend to be. We are going for ‘90s authenticity.”

So, if a younger friend says that the Jason mask looks weird, be kind when correcting them that it’s a Casey Jones mask from Teenage Mutant Ninja Turtles.

Rewind exclusively admits guests who are 21+ and seats a cozy 40 to 50 people. A movie ticket from Screenland Armour gets you a dollar off drinks, and food is served via vending machine like any self-respecting dive. 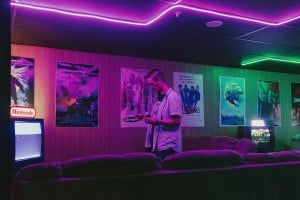 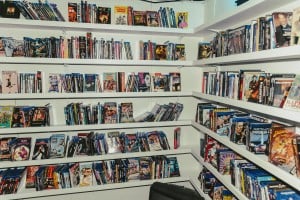 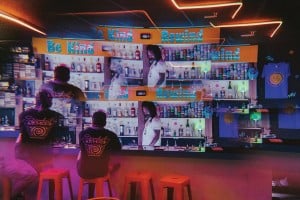 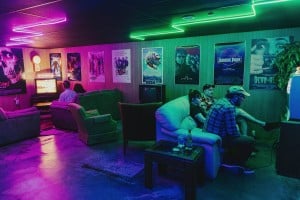 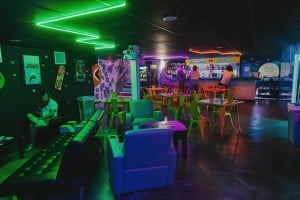 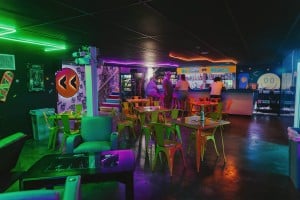 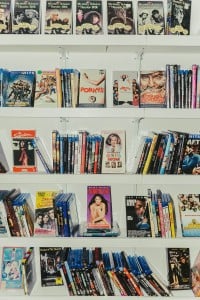 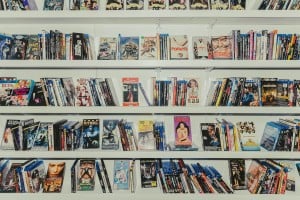 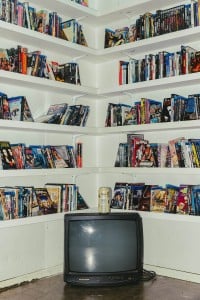 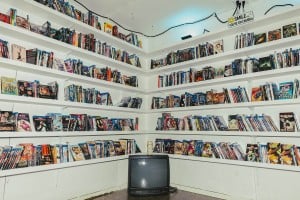 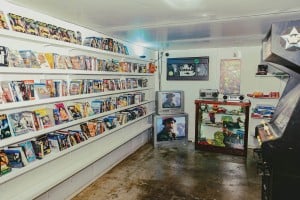 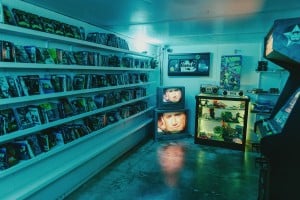 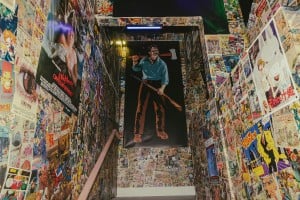 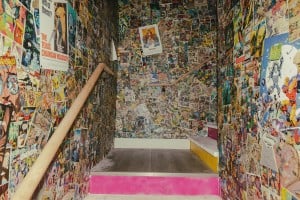 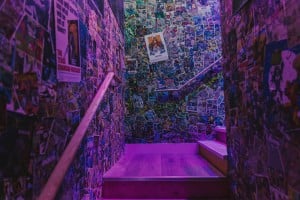 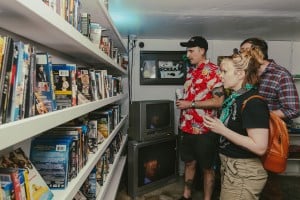 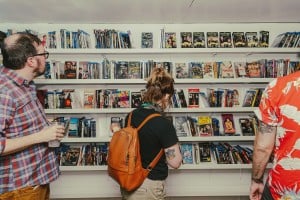 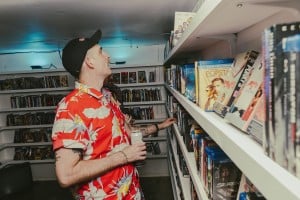 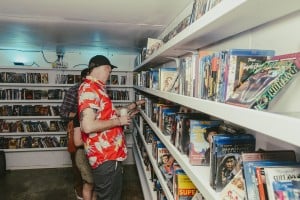 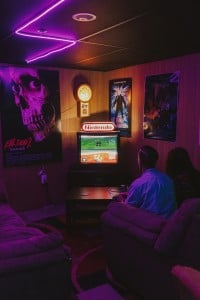 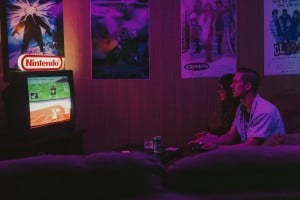 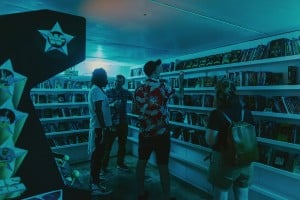 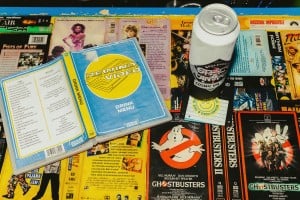 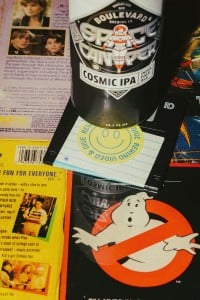 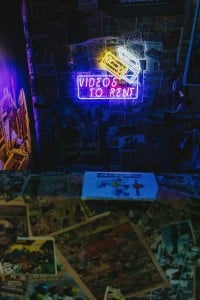 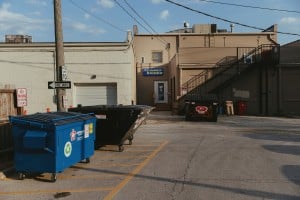 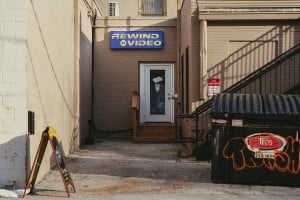