The Descendents give Lawrence a dorky good time 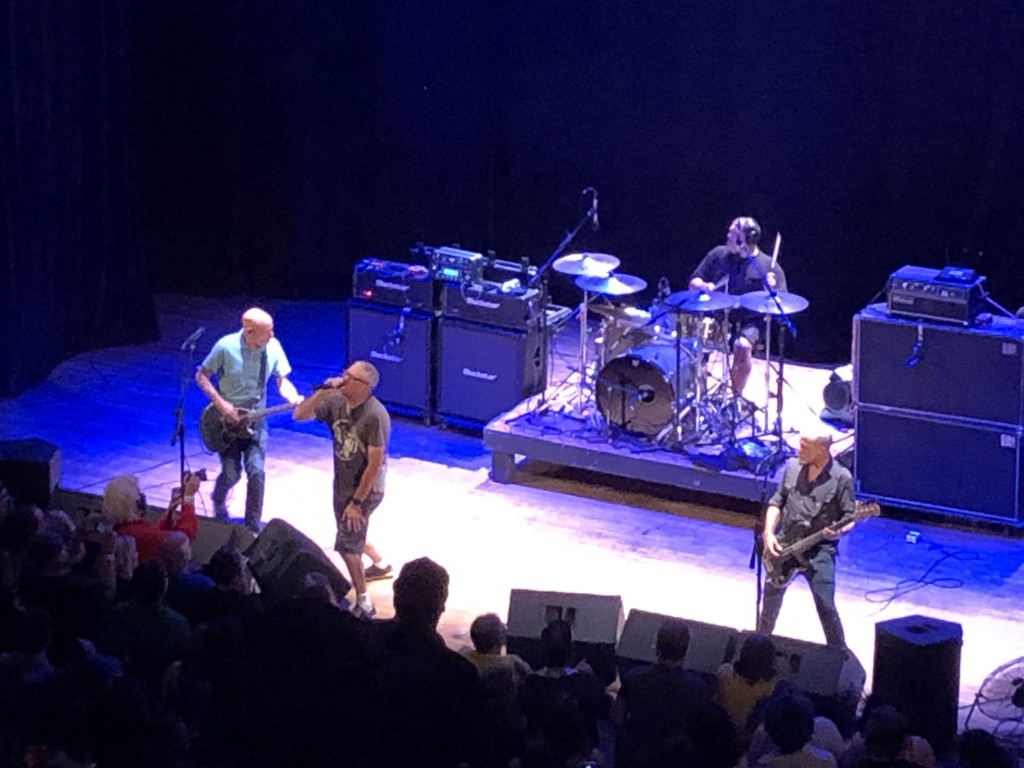 The Descendents at Liberty Hall, 2021. // Photo by Aaron Rhodes

This show at Liberty Hall came as the result of an off date during the Descendents and The Menzingers’ month-long tour supporting Rise Against and was one of the first large, indoor gigs in the college town in the new vaccine- or negative COVID test-required era of touring. What seemed to be a majority of the audience wore masks throughout the show.

Also awkwardly assembled is the latest Descendents LP, 9th & Walnut, named for the intersection of the band’s first practice space. The songs on it were written in sessions occurring in 1977 and 1981 featuring a lineup that included bassist Tony Lombardo and guitarist Frank Navaretta.

The tracks, however, weren’t recorded until a 2002 session in drummer Bill Stevenson’s infamous Colorado studio The Blasting Room. Milo Aukerman’s vocals came last, recorded in 2020 in his Delaware home. The album doesn’t sound particularly disjointed, but the fact that it’s not their best material—whereas their 2016 album Hypercaffium Spazzinate was on par with some of their classics—leaves me to wonder if it functioned more as a COVID downtime project and/or cash grab (though I’m not here to shame them if it was either). It could also be argued that it serves as a kind tribute to Navaretta, who passed away in 2008. 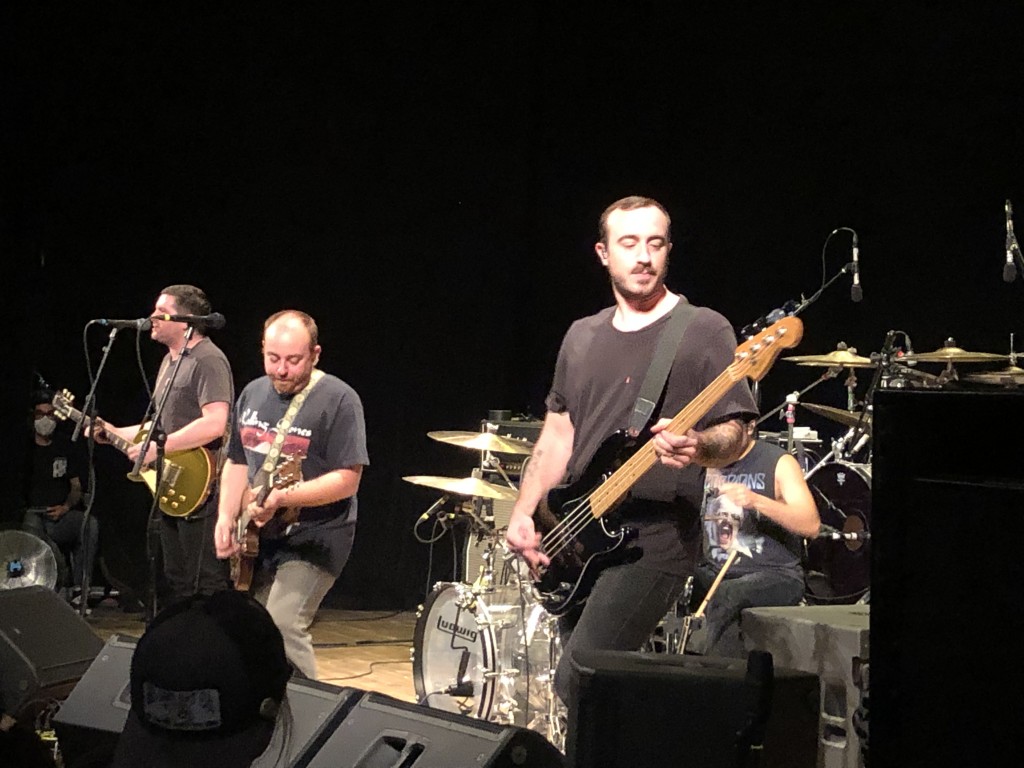 The Menzingers at Liberty Hall, 2021. // Photo by Aaron Rhodes

The band played at least four songs from 9th & Walnut throughout their set which—encores included—stretched to 75 minutes. Though many punk bands can’t come close to providing an engaging hour-plus set, the performance did lose steam during the two encores, as some fans (maybe hoping to cut an hour off their babysitter’s fee that evening) left at this time.

That being said, at least a dozen teenage or college-age kids were determined to keep their spot in or near the front row all night along with other, older loyalists. I would’ve perhaps left at this time, too, were I not tasked to write this review, not due to the band losing any energy—they were impressively vital the whole night (Aukerman kept a water bottle strapped over his shoulder)—but because the songs chosen for the encores could’ve been more interesting. I’ll give them another out here, though; they’ve been playing a lot of these songs on and off for roughly 40 years. I’m sure they’re tired of plenty of them.

Though the assembly of the new album, the COVID precautions, and the dozen or so fans push-pitting and attempting to crowd surf often felt awkward, the band’s playing was tight as could be. And while some performances depend on extreme levels of crowd participation, as long as the Descendents are kicking ass on stage, singing along to yourself, even under your mask, can be fulfilling enough.

I found myself thinking of The Beatles and Black Flag and the Ramones throughout the performance due to both their high level of influence in their niche (what we now recognize as pop-punk) and because many of their classic songs are built from relatively similar riffs and lyrical themes that are still unique enough to stand out from each other.

The catharsis of the unrequited love songs (“Hope,” “I’m The One) and the goofiness of their miniature hardcore songs and joke tracks (“No! All!” “I Like Food,” “I Wanna Be A Bear”) have all proven timeless and unless the performance is lacking or you’ve caught them one too many times, it seems they’ll always hit just as hard. Thursday night was a dorky good time.

Stevenson made sure to take a quick poll of who all had seen them play at The Outhouse and a surprising number of hands shot up (the room wasn’t sold out, but most of the floor was filled and roughly half of the balcony). The band also sold a very cool green t-shirt of their Milo cartoon emerging from a cornfield with “Lawrence, Kansas ‘21” written at the bottom.

Scranton, Pennsylvania’s The Menzingers play a different flavor of melodic punk rock than the Descendents. The songs are more often mid-paced than speedy and are injected with bits of wistful Americana.

The band had headlined The Granada back in November 2019, just after the release of their latest album, Hello Exile, and just prior to the pandemic, so while the setlist didn’t include any surprises or brand new material for longtime fans—primarily singles from the last few albums—the band didn’t miss a note and likely made fans of some Descendents-heads who’d crawled out of the woodwork for this gig.

The 45-minute set’s opening song (track one on Hello Exile), “America (You’re Freaking Me Out),” felt like a perfectly nervous sendup of Trump-era America, but like many songs of the Trump years are coming to be, has taken on an additional heaviness post-COVID. 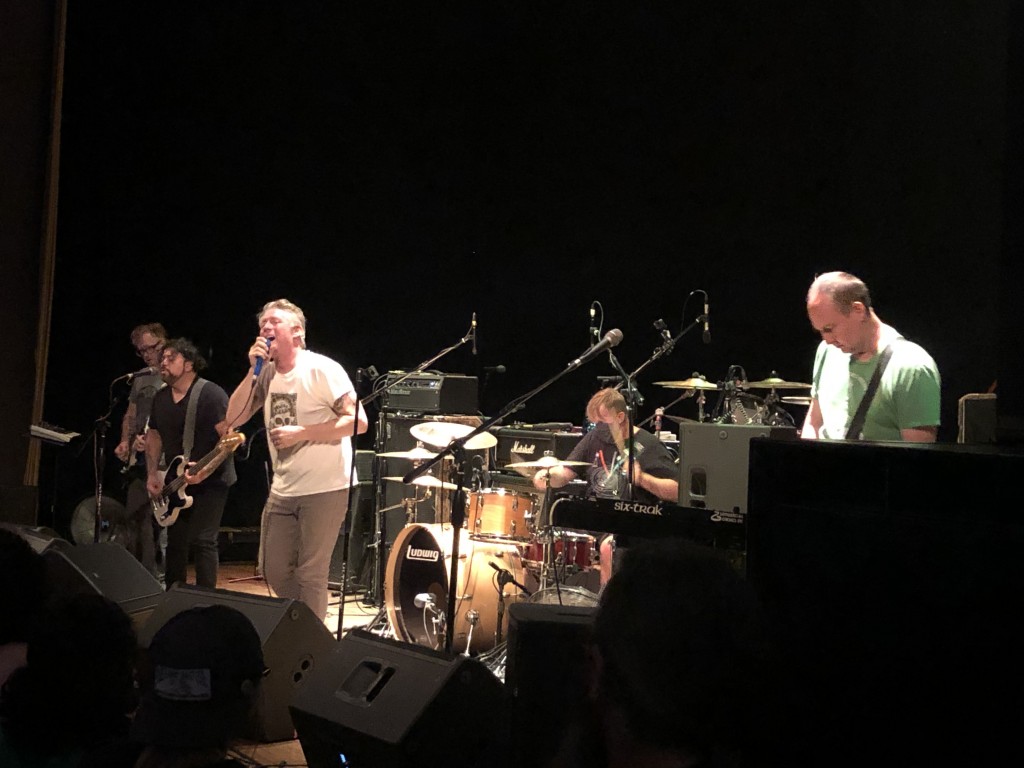 The night began at 8 p.m. sharp with a performance from Kansas City rock scene vets Season To Risk, active on and off again since 1989. One band member noted that the last time they played Liberty Hall in specific may have been opening for All (a band that features all three Descendents minus Aukerman) back in either the early aughts or the nineties.

It seemed as though the band was executing its brooding, math-y combination of post-hardcore and noise rock at the level their fans demanded—a handful would occasionally thrust their arms in the air, mirroring the flamboyant delivery of vocalist Steve Tulipana—though I didn’t find any one song or moment much more compelling than the last.