Brad Norman talks about his doc, The Outhouse The Film, which plays Liberty Hall Saturday

In July 2011, filmmaker Brad Norman announced that he was going to make a film documenting the Outhouse, a punk club in a cornfield three miles east of Massachusetts Street in Lawrence. A Kickstarter to fund what would become The Outhouse The Film 1985-1997 launched in December of that year, and scooped up $4,000 more than its modest $8,500 goal, thanks in part to an impressive nine-minute trailer featuring Ian MacKaye, Kevin Seconds and members of Agnostic Front Roger Miret and Vinny Stigma.

And then: mostly silence — until a couple of months ago.

“I think people expected the film to come out in a year, because we had a really neat website,” Norman tells me. “We had 3,000 people all of a sudden wanting to know, When’s it coming out?“

Now there’s an answer: Outhouse premieres at Liberty Hall on Saturday, October 14 — an event that quickly sold out.

Outside the theater on a recent sunny afternoon, I talked with Norman and Tim Manning, another member of the production team.

What took so long? Norman explains that the trailer was a preproduction video, made while he was still attending the University of Kansas. “I hadn’t even picked out a camera yet,” he says. “I was still taking film classes. [But] I’d gone to D.C. and Minneapolis and Detroit to get interviews — anybody I could get to get a reel, because I didn’t want to do a Kickstarter without a reel.”

Norman started the project with, he says, an awareness that plenty of indie, DIY punk documentaries just aren’t that good. So he asked for help from Manning, whom he knew had worked on film sets and was also an Outhouse regular in the venue’s prime.

“I had been to many shows at the Outhouse, and I just really wanted to help out,” Manning says. They two joined forces about halfway through production of the documentary. “He appreciated me being able to help kick it into gear again.” 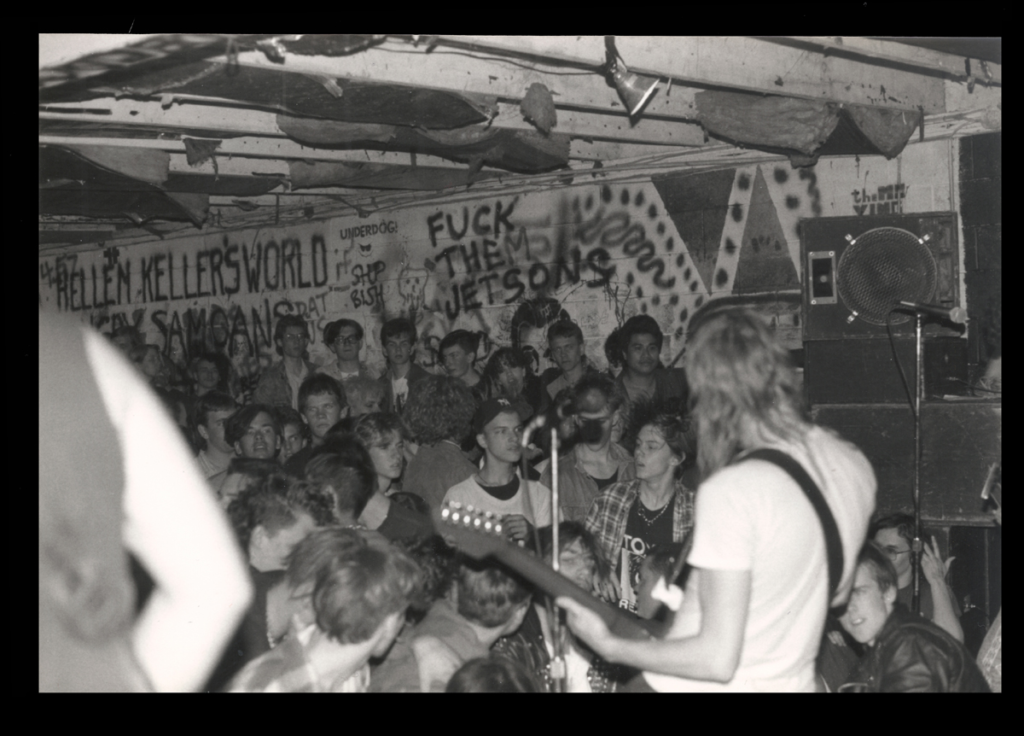 The pair showed the work-in-progress to people who had no idea what the Outhouse was; Norman wanted to make sure his film would hold the interest of viewers less familiar with the place. This process led to further editing, and the addition of some narration.

“We talk about William S. Burroughs going out there to do his artwork,” Norman says. “And after his scene, someone said, ‘Who is he? Who’s that old man?’ We didn’t really say: We just assumed [people would know].”

Besides the late Beat writer, Outhouse includes MacKaye, Circle Jerks’ Keith Morris, Dave Brockie of Gwar, members of Fishbone, and Ice T, among other performers. But Norman also wanted to hear from people who attended shows there and played in local bands. Early in the filming process, he put out an open call, and set up his camera at RecordBar, for anyone who’d ever attended an Outhouse show.

The music in the film reflects that decision. Alongside tracks by Fugazi and Agnostic Front, the majority of the music you hear during the movie comes from area bands such as the Mortal Micronotz, Second Chance, and the Sin City Disciples.

“Two of my favorite performances in the film — one is from a national act, and the other is a local performance — and they both give me goosebumps equally,” Norman says.

Norman tells me he wanted to avoid simply listing bands who buzzed the Outhouse and later enjoyed fame (Nirvana, the story goes, played to 20 people), in favor of a narrative of shared experience. He describes it, in essence, as a National Geographic documentary that’s about punks instead of gazelles.

“The best stories were the ones that involved everybody and involved the entire night,” he says. “We went after bands that we thought had a story, you know? Ice T’s manager said that the only reason that he even let me talk to Ice was because he’d heard that Outhouse story 10,000 goddamn times.”

The Outhouse’s story is also inexorably tied up with that of Bill Rich, who kept the club running despite visits from undercover police and not a few efforts by neighbors to shut it down. Such practical aspects of the Outhouse story usually get left out of the fable.

“If there wasn’t somebody responsible answering those letters where they’re asking, We’re getting all these complaints — what are you going to do about it? it wouldn’t have lasted,” Norman says of Rich. “People will learn a lot about the Outhouse they didn’t know. I certainly did.”

With all those local bands and Outhouse patrons, it seemed to Norman that the film belonged at Liberty Hall. Rather than taking it to festivals, he wanted to screen it first in Lawrence.

“We did a lot of interviews with bands that were pretty famous, that I love, but they just didn’t add anything to the film except for who they were,” concludes Norman. “We didn’t have time for that. There was too much good stuff coming from either the fans or the promoters.”

The Outhouse The Film 1985-1997 premieres at Liberty Hall Saturday, October 14. It is sold out, but there are still a few tickets left for the Bottleneck after show with Toxic Reasons and Ultraman.