"I shouldn't have picked this little tree. Everything I do turns into a disaster. I guess I really don't know what Christmas is all about." 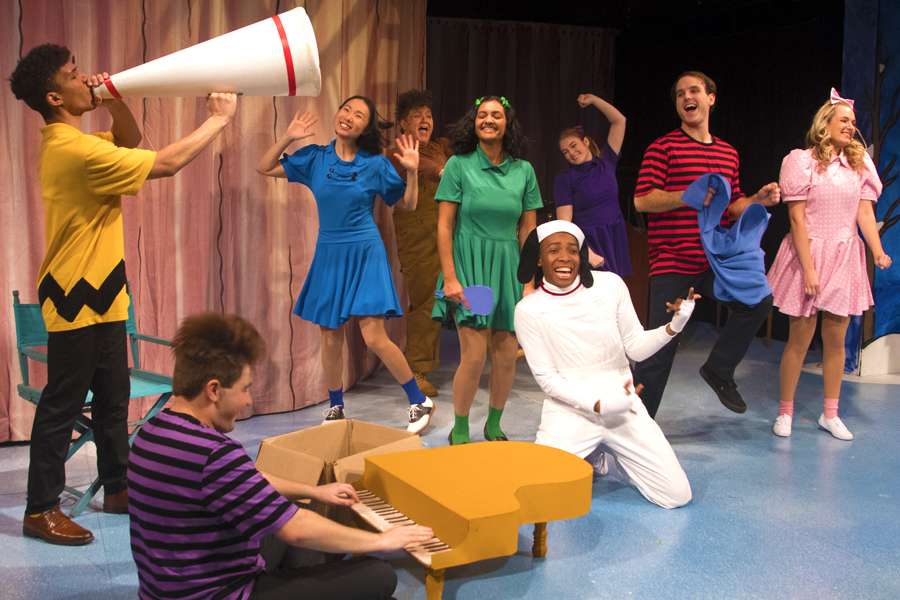 Photo by Jim Vaiknoras and courtesy of The Coterie Theatre

I remember being 3, running around nursery school like a crazed doll. So I should relate to the mayhem of a sold-out holiday-weekend performance of the Coterie Theatre’s A Charlie Brown Christmas (by Charles M. Schulz), with the active, screaming (coughing) kids and their adult companions. It’s actually good to see a packed theater, even if contagion concerns haven’t completely left the building.

But when the lights dim, and the show starts, chaos turns to calm and rapt attention. Charlie Brown and his entourage parade in on skates before a lighted backdrop of falling snow (set design by Scott Hobart, lighting design by Jarrett Bertoncin), while a jazz trio plays a rendering of “Christmas Time Is Here.”

The cast members, a tight ensemble, pop with energy and their characters’ personalities. Directed by William J. Christie, this show and these actors enchant.

Charlie Brown and his pals are like old friends, ones I haven’t seen in a while, and there’s no better lift than a revisit with that kind of familiarity. The Coterie production, an adaptation of the 1965 TV special by Bill Melendez and Lee Mendelson, maintains the spirit of that show while bringing its own renewable energy to the affair. As soon as Lucy utters her first line, I recognize that sassy girl.

The jazz trio accompanying the production plays the recognizable melodies of Vince Guaraldi’s original arrangements, including the “Peanuts” theme, which I hummed the remainder of the night. The talented musicians — music director Gary Adams on piano, Jeff Harshbarger on bass and Sam Wisman on drums—perform almost continuously in the background as the story unfolds onstage.

Charlie Brown (a solid Lucas Lowry), who is the “Charlie Browniest” of all Charlie Browns, according to Lucy (a strong, lively Weiyi Zhang), is directing his pals in their school’s Christmas play. But he’s dismayed at the holiday’s prevailing commercialism. Even his dog, Snoopy (a buoyant and scene-stealing Terrace Wyatt Jr., who even blurts Snoopy sounds), festoons his doghouse for a Christmas decorating contest, resulting in Charlie Brown’s trademark sigh. Even Charlie Brown’s sister, Sally (a delightful McKenna Harvey), composes a rather lengthy and detailed gift wishlist for Santa, and Linus (an engaging Fisher Stewart), with his inseparable blanket, eventually comes around to Charlie Brown’s idea of Noel. 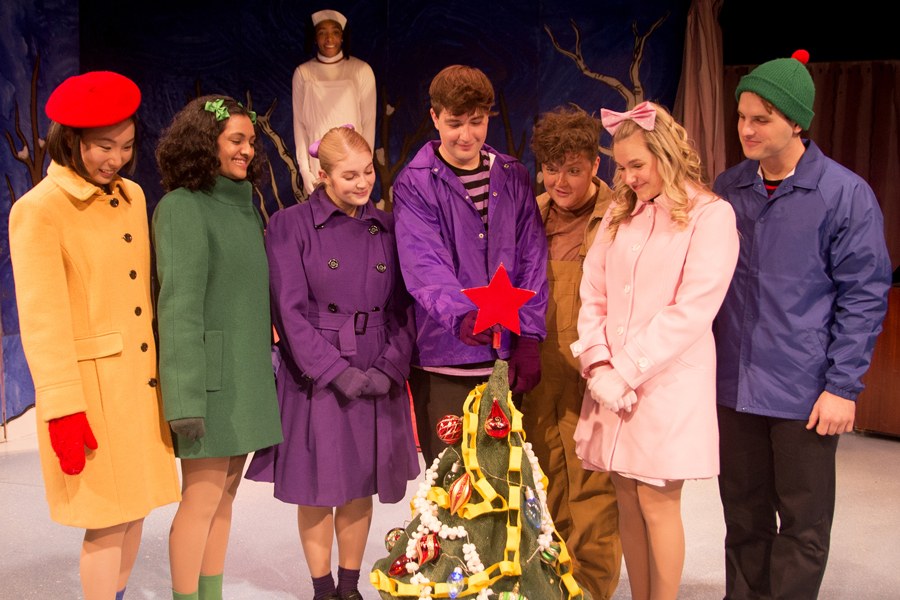 Photo by Jim Vaiknoras and courtesy of The Coterie Theatre

Rounding out the animated group of actors making up Charlie Brown’s gang and school-play cast: Pigpen (Jen Benkert), with the concomitant dirt; Frieda (Tehreem Chaudhry), with her naturally curly hair; Violet (Lauren Taylor); and Schroeder (Cameron Mabie), with his companion keyboard. As Schroeder riffs a little Beethoven (with an assist from pianist Adams), Lucy insists Beethoven couldn’t be famous if he’s never appeared on a bubblegum card.

The cast has both brains and beauty, decked out in smart attire in bright eye-candy colors (costume design by Georgianna Londré Buchanan)—a deep purple coat for Violet and a pink one for Sally, and the signature shirts of Charlie Brown, Linus and Schroeder (not to mention the Snoopy getup and Pigpen’s billowing dirt). It’s a production that both owns its tradition and boasts a contemporary feel.

This is no generic holiday show, either, but a make-no-mistake Christmas play (see: title of show). Yet there’s something for everyone in this joyful production, whether seeing it for the first or perhaps the umpteenth time.

“Make new friends but keep the old, one is silver and the other gold”—that old childhood song comes to mind as I revel in this show. Charlie Brown, Lucy, Linus, Schroeder, Pigpen, Snoopy, Frieda, Sally, Violet—they have the comforting aura of childhood friends, albeit cartoon characters.

At A Charlie Brown Christmas, I could see small tykes and young kids on the brink of making some new and maybe lifelong friends here, too. 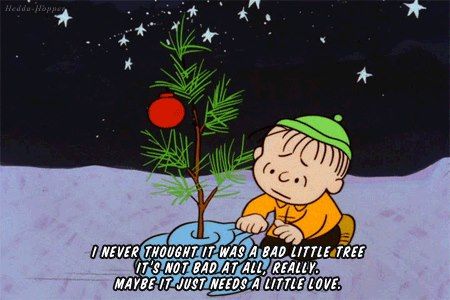