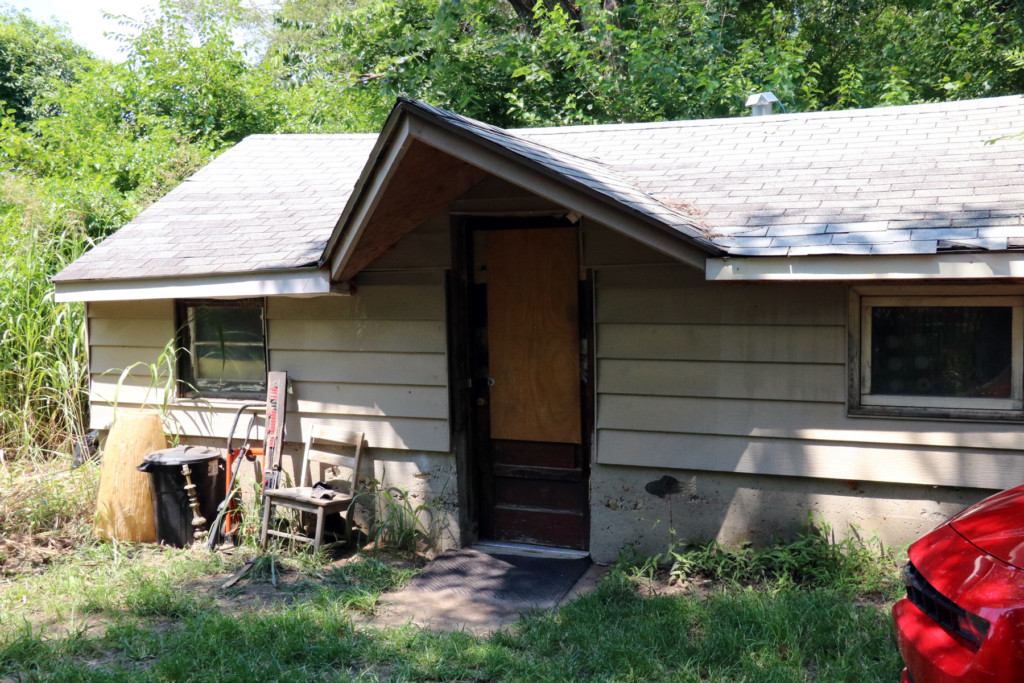 Just outside Lawrence city limits, down a gravel driveway off 59 Highway, is an old farmhouse where the musician and producer Mitch Hewlett lives. There’s woods to the south, a cornfield to the north, and, right before you reach the farmhouse, a little, old, low, squat building, unassuming from the outside.

Inside is a different story. This is the Coop, where, for the last year, Hewlett and Cody Boston have been filming live music sessions from some of the area’s top acts. Later today, Eric Davis will come by with a keyboard setup, an array of lights, and a crew to shoot a performance by his electronic project Pala Zolo. For the moment, though, it’s just Hewlett, Boston, and me. Hewlett’s in a desk chair in front of his recording desk, Boston is on a stool. There’s nowhere for me, so I’m on the carpet. Surrounding us are musical instruments, recording equipment, quite a few box fans, and one very hard-working window air-conditioning unit. 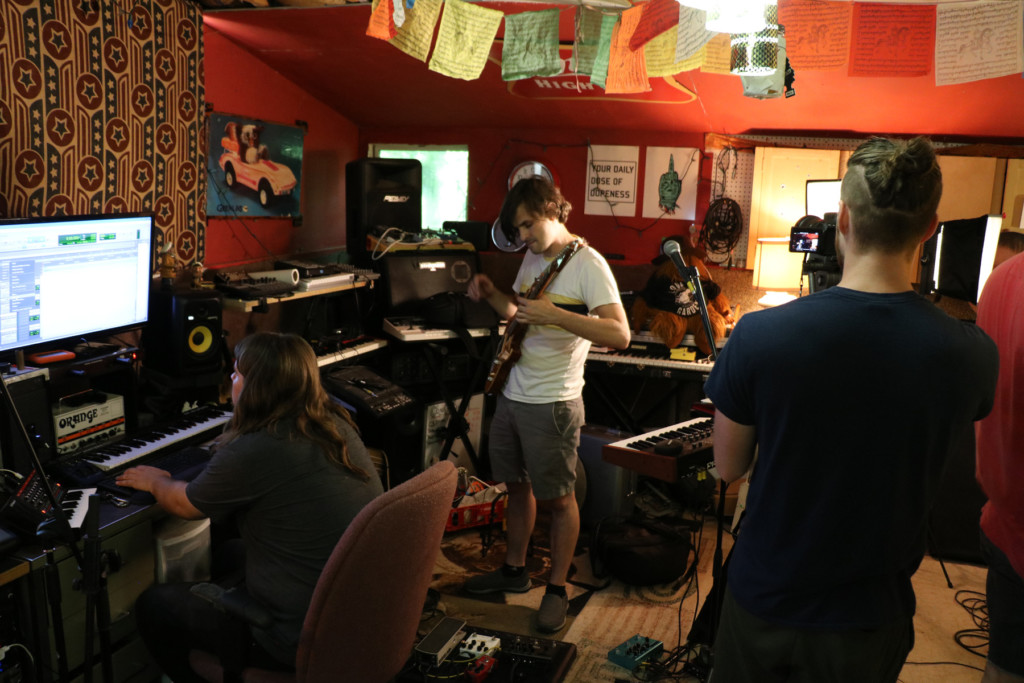 Hewlett and Boston met a few years back. Boston was shooting, editing, and producing in-studio sessions for KJHK, the University of Kansas’ student-run radio station, and a couple of Hewlett’s bands—Westerners, Macemouth—came through to perform. They got to talking about doing a project together rooted in each’s core skills: Hewlett in audio, Boston in video. Last December, they recorded the first installment of the Coop Sessions, with ukulele folk artist Eems. The concept was fairly simple: Invite performers over to the Coop, cram them (and all their equipment) into the room, and film them performing.

“Even before we started, people were like, ‘I’m so excited you’re doing this,’” Boston recalls.

There was a learning curve to the process but, as Hewlett points out, it was a specific one: “Not to what we do, but doing it in here,” he explains, gesturing around the Coop, which is about the size of a one-car garage. “It looks pretty big when everything’s pushed away, but you get a four-piece band in here and a camera crew, and it’s just stuffed.” 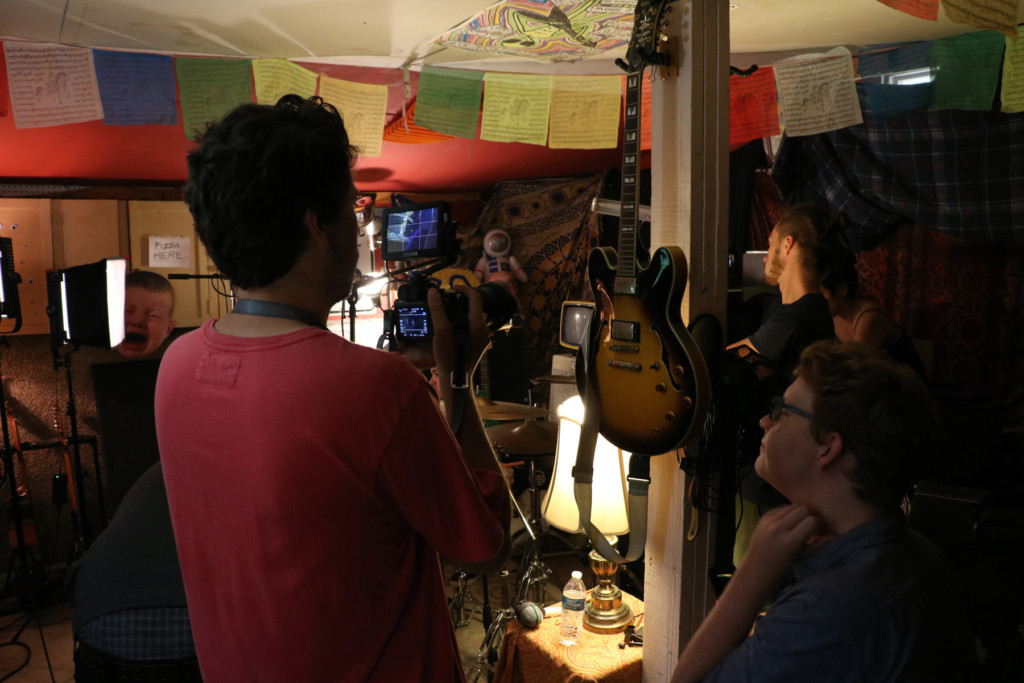 For load-in, Boston says, “You just work in an assembly line out of the corner.” There’s a lot of tapping on shoulders as folks squeeze past each other during filming, trying not to stumble over the multitude of expensive equipment.

Since Eems, the pair has hosted Toughies, NvBlvckCity, Drugs and Attics, Heidi Lynn Gluck, LK Ultra, Highwestus, Bummer, and more out at the Coop. For the first season, the videos were distributed via YouTube, but they also found a strong following via Instagram TV, which makes individual songs released from each longer session more readily watchable.

“A three-minute clip is pretty perfect,” Hewlett says. “You can get into that, wherever you’re at.”

The Coop Sessions’ second season debuts this week and features the folk duo Madisen Ward and The Mama Bear. They’re still recording at the Coop and releasing the videos through the Coop Sessions’ YouTube and Instagram pages. But they’re also now partnering with The Bridge, the idea being that a local radio station might (literally) boost the signal of their project.

“They’re going to share out our stuff, possibly broadcast some of the singles from the sessions, so that’s really exciting,” Boston says. “I was listening to one of the songs in NvBlvckCity’s set, and it was something like, ‘You won’t hear our songs on the radio,’ and I was like, ‘Watch me!’”

Over the long term, the goal is to rope in more touring acts, but for now the Coop Sessions will continue focusing on local music. And whoever’s being filmed, they’ll be keeping things raw and tight.

“There’s no fancy editing. It’s pretty lo-fi, for the most part. You’re seeing us in the shots, goofing around sometimes,” Hewlett says. “I love being this intimately connected with a performance.”

The Coop Sessions’ new season debuted Tuesday, September 24. You can find out more info on the Facebook page and watch everything on YouTube channel.