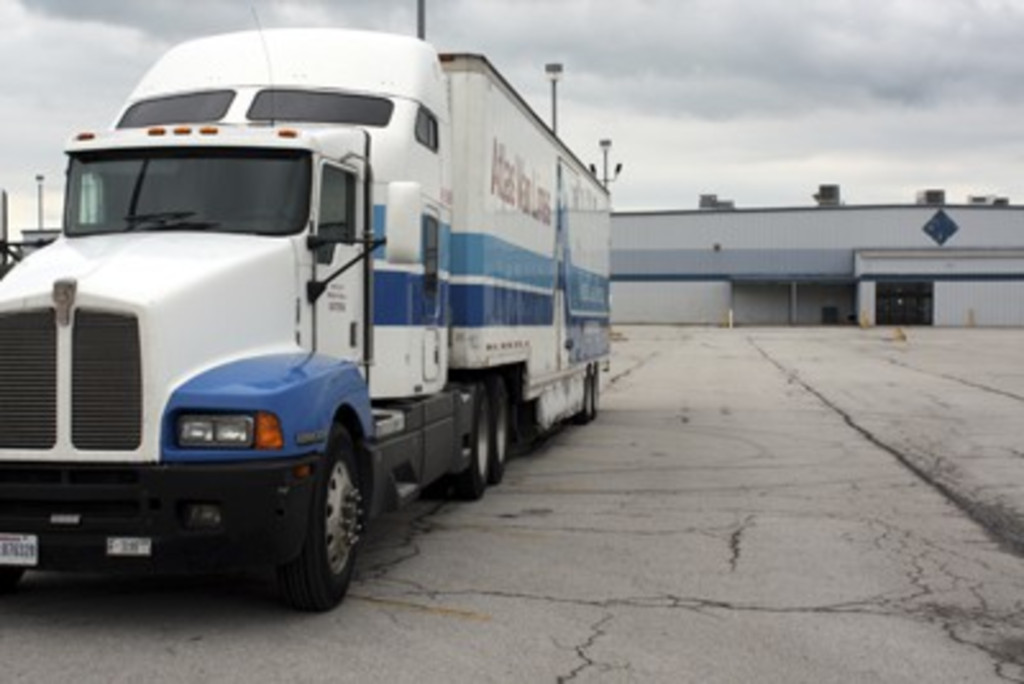 A scrap of paper that’s snapped between the windshield and the wiper blade of a rusting Ford Bronco begs: “Please do not tow. Will return to pick up.”

The Bronco sits in the parking lot of a former Sam’s Club at Noland Road and U.S. Highway 40. The vehicle shares a piece of weed-strewn asphalt with several truck cabs and semitrailers of various origin. Dead bugs cover the face of one cab with a Kansas license plate and Louis L’Amour paperbacks visible on the dashboard.

The lot suggests a truck stop the morning after an alien abduction. Big-rig operators and others have stashed vehicles near the Sam’s Club for more than a year — “maybe even quite substantially longer than that,” according to Greg Hunsucker, co-owner of V’s Italiano Ristorante a few miles down the road.

Sam’s Club, a division of Wal-Mart, abandoned the site in 2001. The still-vacant warehouse store, paint peeling from its siding, used to anchor General’s Plaza, one of the sadder dying strip centers in the metro. Current tenants include a dollar store and a motorcycle-riding school.

The Sam’s Club died a typical Wal-Mart death. Company officials, having determined that the intersection had outlived its usefulness, decided to relocate the business to a taxpayer-subsidized shopping district three miles to the east.

Wal-Mart has abandoned hundreds of locations in the course of its aggressive expansion. Often, city governments assist with those transitions through property-tax breaks or bond financing.

Al Norman, a Massachusetts-based critic of big-box stores who advises communities on how to keep them out, says Wal-Mart’s inventory of “ghost stores” is unprecedented. Norman used to conduct a yearly inventory of orphaned Wal-Marts. “I stopped doing it just because it was too time-consuming,” he tells me.

The Sam’s Club on Noland Road would have to be included on any list of the most depressing zombie Wal-Marts. The building looks like a poorly maintained shed suffering from elephantiasis. The spider-web crack in the windshield of one of the truck cabs makes the parking lot look like a junkyard. “Boy, it has been an eyesore,” Hunsucker says.

It’s illegal, too. Responding to a complaint (not from me), Kansas City, Missouri, codes officials are in the process of notifying Wal-Mart that the Sam’s Club parking lot is in violation. The property’s zoning category does not permit trucks to be stored on-site.

Of course, Wal-Mart isn’t the one using the lot as a motor pool. But the company’s neglect has allowed it to happen. “The property owner is always responsible for the property,” Wilson Winn, a manager in Kansas City’s Planning and Development Department, tells me.

Wal-Mart bought the land from Harry and Leona Helmsley, of all people.

The Helmsleys were indicted for tax evasion in New York in 1988. The subsequent trial of Leona Helmsley — “Only the little people pay taxes,” she said, according to testimony — provided the New York papers with endless grist. (Helmsley eventually went to prison; her husband was deemed too frail to stand trial.)

The Helmsleys sold land to Walton in a part of town where it’s difficult to know if it’s Kansas City or Independence. The stretch of U.S. 40 that fronts the Sam’s Club is in Independence. But the store itself is in Kansas City.

For a time, Kansas City tax collectors received the bounty from Sam’s Club, happy in the thought that many of the patrons were surely residents of Independence. The tables turned in 2000, when Wal-Mart announced that the Sam’s Club would close and reopen at the Crossroads shopping center in Independence. The shopping center, near 39th Street and Missouri Highway 291, sits in a tax-increment financing (TIF) district that Independence created in 1993.

The two municipalities continue to engage in hostilities at their shared border.

In 2002, Hy-Vee received incentives from Independence to build a supermarket on the northeast corner of Noland Road and U.S. 40. Later, Kansas City officials agreed to subsidize the redevelopment of Blue Ridge Mall, two miles to the west. A Wal-Mart Supercenter anchors that project.

Kansas City and its eastern suburbs persist in throwing incentives at retailers. They do this in part to keep sales taxes from leaking into neighboring communities. New Hy-Vee and Wal-Mart stores will open in Raytown this year, aided by tax incentives. They replace existing stores in the same suburb. In Sugar Creek, an entire neighborhood was condemned to accommodate a developer aiming to put a supermarket on the edge of Independence city limits.

This tawdry exercise hurts taxpayers in the end, as more and more development that used to pay for services vanishes down the TIF wormhole.

I understand the impulse. No public official wants to be the one to explain to residents why they have to drive 10 miles to buy a hair dryer or a decent plum. Still, there are steps that cities can take to prevent the dereliction of a structure, such as the Sam’s Club in eastern Kansas City.

Also, a company like Wal-Mart doesn’t embarrass easily. Upkeep of the Sam’s Club on Noland Road never appeared at the top of anyone’s action agenda in Bentonville, Arkansas. “They have a cavalier attitude about property they’re not actively using,” Norman says of Wal-Mart.

In addition, empty big-box stores tend to remain vacant for a while because alternative uses are hard to find.

Norman encourages cities to ask for demolition agreements when they approve major retail developments. These agreements spell out the terms under which a city can use a bond the developer has posted to pay for the demolition of a vacated building that no one wants to buy.

The Institute for Local Self-Reliance , a group that lobbies for environmentally sound and equitable development, promotes demolition bonds as well as “dark store ordinances,” which may, for example, require property owners to market empty buildings as soon as they become available. These ordinances also may include clauses to prohibit big-box retailers from trying to keep competitors from taking their places once they’re gone.

Alas, economic-development officials in Kansas City tend to go into negotiations with wallets open and blinders on.

The Blue Ridge Mall redevelopment provided an opportunity to engage Wal-Mart officials in a discussion of the nearby Sam’s Club that they had abandoned years earlier. It was an opportunity missed, given what has taken place in the parking lot. The city also neglected to make Wal-Mart account for its “hypermart” store near what used to be Bannister Mall. It closed the day the supercenter opened at U.S. 40 and Blue Ridge Boulevard.

Wal-Mart Realty (a division unto itself) lists the Noland Road Sam’s Club as available for lease. I contacted the office but received no official comment.

As for the Ford Bronco, I called the number at the bottom of the please-don’t-remove note. Ryan Roberts tells me that he recently bought the vehicle. But the dolly he was using to tow the truck broke. “I’m trying to get it out of there as quick as possible,” he says.

If he acts soon — or at all — he will have done better than Wal-Mart.