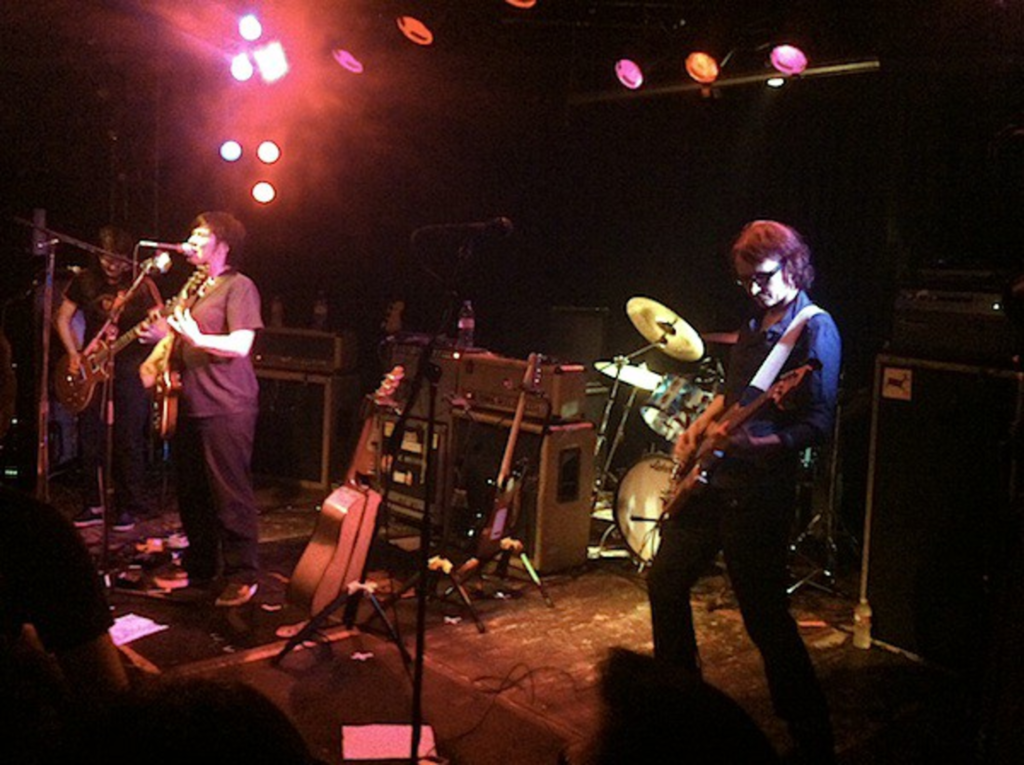 “I’ve been waiting 20 years to see this show,” an excited fan said from behind me at RecordBar last night, a few minutes before the Breeders were scheduled to take the stage. She was not alone in this sentiment. The mixed crowd – from young hipsters to aging rockers – seemed to be beside itself with anticipation. As the tech hands set up the stage, chatter was high among the concertgoers, eager to swap their stories of where they were when the Breeders first changed their lives, reminiscing about that golden period after the release of their seminal 1993 album, Last Splash.

The band is touring now with the original lineup from Last Splash: guitarist and coolest woman on the planet Kim Deal, her sister and fellow guitarist Kelley Deal, bassist Josephine Wiggs and drummer Jim Macpherson. As these four carved their way through the tightly coiled crowd and to the stage, hands from audience members grazed their arms, touched their backs and cupped their shoulders. It was a tender sort of blessing, as though the audience collectively felt the presence of greatness. (I write that without any touch of irony, for the record. Kim Deal brushed past me and I got chills.)

There was absolute quiet, save for a few stray excited whoops, as the band found their instruments and Kim opened the set with the exquisite and fragile “Off You.” She was absolutely magnetic, and for those few minutes, there was nothing else in the room. I couldn’t feel the elbow of the guy next to me digging into my arm. I couldn’t smell the slowly rising reek of body odor. It was just Kim Deal, telling this captivated audience that she was the makeup on our eyes, and it was sad and powerful all at once. 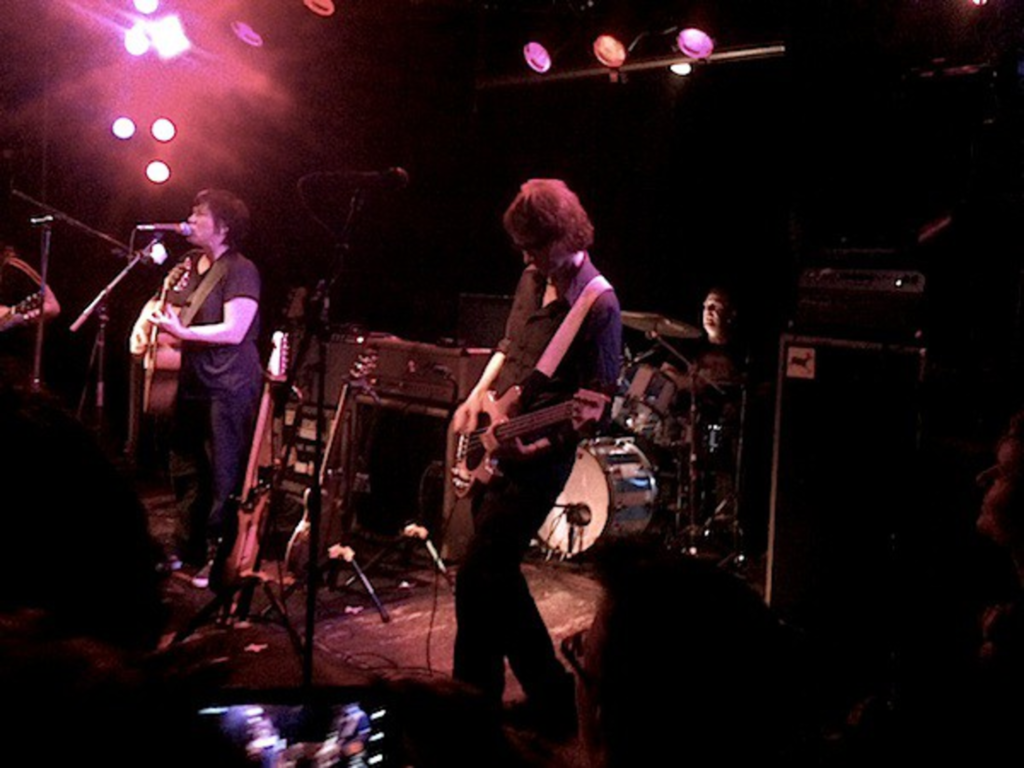 But the delicate reverie would not last. The second song, “Saints,” shattered everything. One of the best things about the Breeders has always been the subtle nuances of Deal sisters’ guitar playing, and though that was on full display last night – though a bit less tight on some of the band’s new tracks – it was sometimes more interesting to watch Kim’s face rather than her fingers. She and her sister play with absolute joy, these shit-eating grins spread across their faces. It’s impossible not to feel the transference of that emotion.

Unlike the Breeders’ 2013 tour, which was to celebrate the 20th anniversary of Last Splash and which featured that album almost exclusively, this new tour is a short run designed to get the band some practice with a few new songs. “Skinhead #2” was introduced as one of them, and Kim laid out several photocopied music sheets at her feet as she began to play it. It was rough – she hadn’t memorized the lyrics – but that hardly seemed to matter to her or anyone watching. She laughed when it was over. For any other band, this might have been demoralizing; for the Breeders, it was all good fun – and even in its skeletal, sketchy frame, “Skinhead #2” still sounded like a killer song.

“Thanks for your support,” Kim said, smiling at the audience. Another new track, “Walking With a Killer,” proved more successful. It was also creepy as fuck: I’m walking with a killer, and I’m gonna need a ride, Deal sang gently into the microphone, as though she had a lullaby on her tongue. We walk through the night, through the cornfields of East 35/I know I should hide, I know it was my night to die. More stuff like this from the Breeders, and they won’t need to rely on 20-year-old material to fill rooms.

If the Deal sisters (and Macpherson, for that matter) looked like they were cutting loose, Wiggs was on the opposite end of the spectrum. In typical British rockstar fashion, Wiggs hung around her shadowy corner of the stage, her expression hardly shifting once throughout the evening – except when she began those definitive bass lines in “Cannonball,” with a barely perceptible twitch of a smile at the corner of her mouth. Kim called her out on this.

“You’re not going to say one single thing the entire night, Jospehine?” she teased. Wiggs barely glanced in her direction, then stepped up to the microphone. She waited for the cheering of the crowd to quiet, and restarted her announcement three times.

“What would you like me to say?” Wiggs asked slyly. “I know people here who came to see us for the first time in Amsterdam in 1993.” She smiled widely for the first time, and it was clear that the longevity of the Breeders’ fans meant something to her.

This exchange was brief, and the band returned quickly to its set. One particular highlight of the evening came with a cover of the Beatles’ “Happiness is a Warm Gun,” where Kelley took lead on vocals; the whole thing was totally insane and totally satisfying. Songs had a way of ending abruptly; guitar riffs fleshed out the middle of songs and exploded into choruses – they didn’t fizzle out and they weren’t gratuitous. When the set was over, the band seemed to want to leave the stage before its encore – though, thankfully, that bit of theater was prohibited by the mob of people blocking any smooth exit. The band resumed and ended fiercely with “Iris,” and when they finally dismounted the stage – nearly 80 minutes after they first began – they seemed, like their audience, to be in a sort of daze.

Leftovers: I didn’t get to RecordBar in time to catch opening act the Funs, from Chicago, but literally every person around me was talking about how good they were. So, here, go get you some fun.

Also: Macpherson was wearing a Josh Berwanger shirt. So that was cool. 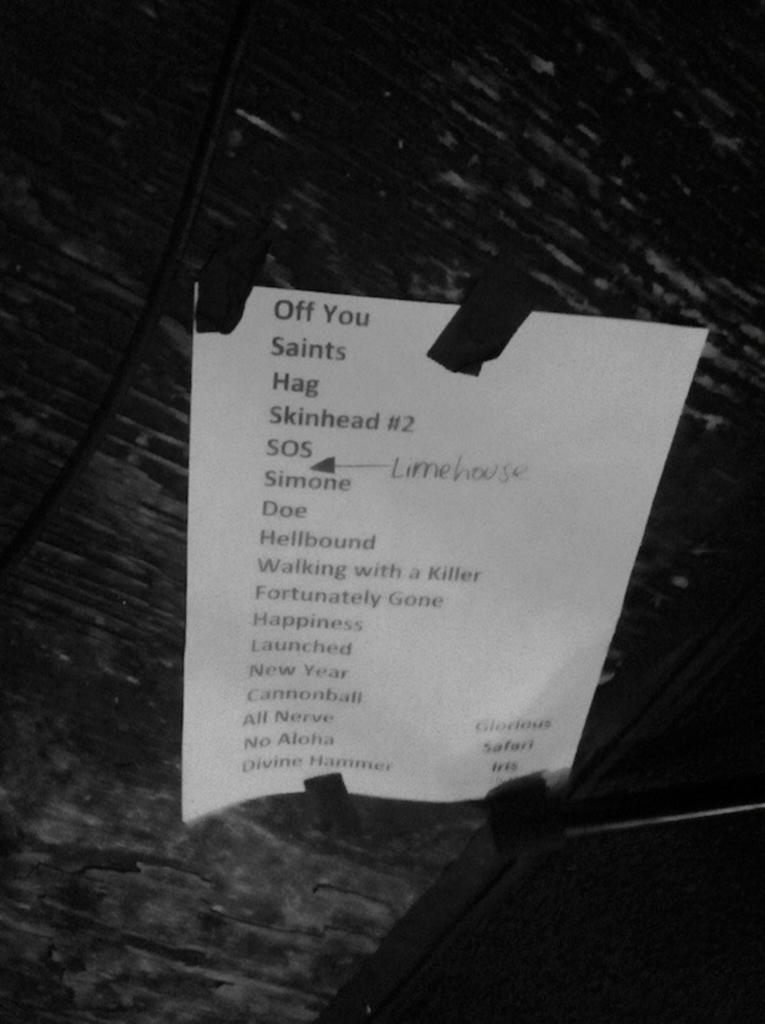