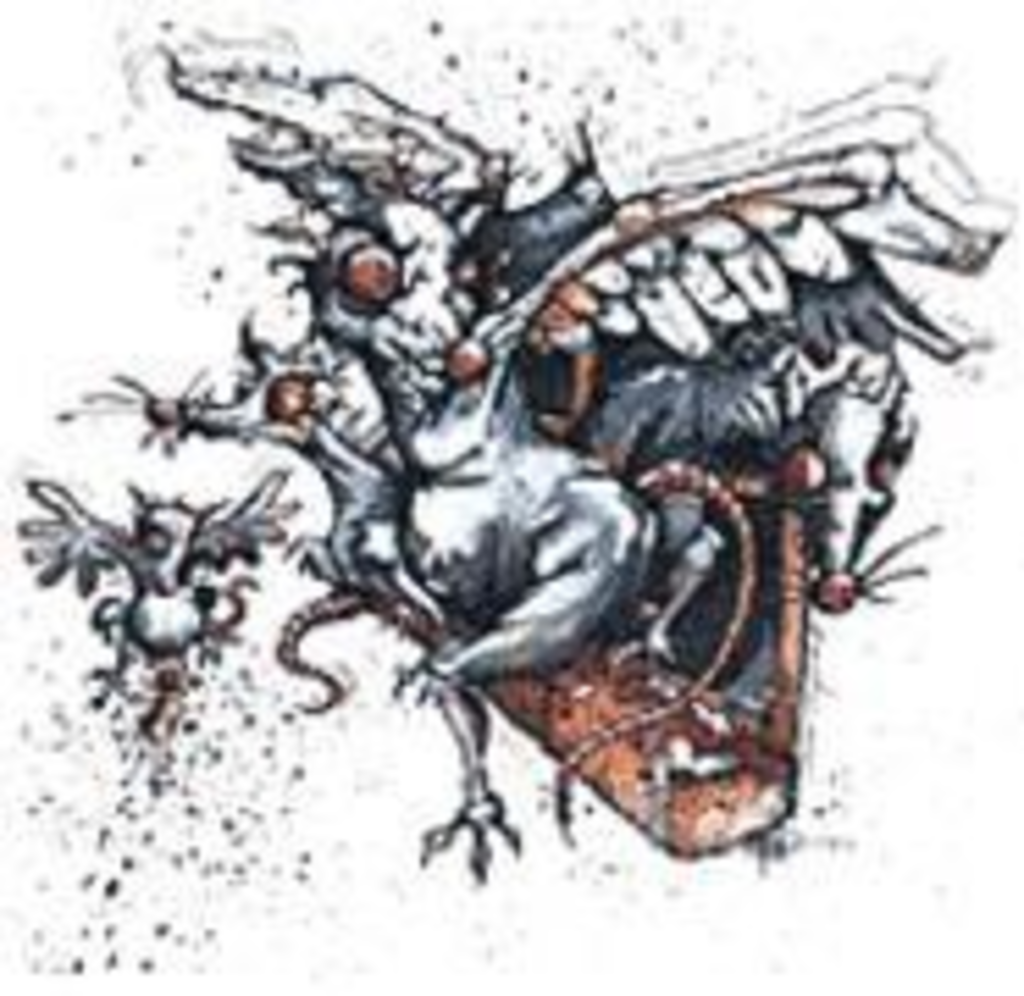 It was a poetic idea at the time. In 1890, a group of aristocrats gathered in New York’s Central Park, carrying 60 delicate, small-beaked birds brought from Europe. Dubbed the American Acclimatization Society, this pedantic consortium was bound by a common goal of populating North America with every bird mentioned in Shakespearean verse. The thrushes, chaffinches, nightingales, and skylarks they’d imported had all died out. But with European starlings they hit pay dirt. The little birds took flight from downtown Manhattan and made nests and multiplied. Now European starlings are among the most common birds in the United States — and Americans must suffer the legacy of an otherwise forgettable line from Henry IV: “Nay, I’ll have a starling shall be taught to speak nothing but ‘Mortimer’…”

Among the sufferers is Donald Ernst, custodian of The Roanoke apartment complex near the corner of Westport Road and Southwest Trafficway. One recent morning, Pitch Weekly found him in the midst of a tedious, daylong task. His face hidden beneath a surgical mask, he aimed a high-power sprayer at the complex’s sidewalks, blasting away a layer of bird droppings as dense as a Jackson Pollack painting. “It takes me all day to do this,” he says. “Sometimes I don’t even take a lunch. And I’ll come back tomorrow and it’ll be just as bad as it was this morning.”

Many of midtown’s European starlings have chosen The Roanoke as their autumn home. They’ve been flocking to the complex for the past three years, staying a little longer each fall. They arrive each night between 6 and 7 and leave before 8 the next morning.

When the starlings first arrived, The Roanoke’s managers turned to the Missouri Department of Conservation for help. Officials sent them audio recordings of starlings in distress, which they broadcast from speakers on the rooftops. The bird screeches seemed to startle the starlings at first, but they quickly figured out that the danger wasn’t real and settled into the trees unalarmed.

The next year, managers had the trees sprayed. The Roanoke is nestled into the shade of a dozen or so sweet gum trees, which yield bushels of spiky, golfball-size seed pods. The spraying cut down on the number of seeds, but it had no effect on the birds.

Wendy Sangster, wildlife biologist for the Missouri Department of Conservation, isn’t surprised by this. She says European starlings feed on just about anything — seeds, insects, garbage — so it’s nearly impossible to determine what attracts them to a roosting area. Kansas Citians are at a disadvantage because they’re prohibited from one of the most effective means of deterring the birds: aiming a gun skyward and shooting them dead.

Larry Rizzo, a natural history biologist for the conservation department, says city dwellers are hampered by yet another fact: the tenacious starlings love urban environs. With all their concrete and garbage, cities tend to stay warmer and offer more food than farmlands do during winter. And, Rizzo adds, these innocent-looking creatures are nothing short of aviary gangsters. True criminals, they muscle into the turf of native birds and rob them of food and shelter. “They are the thugs of the bird world,” he once wrote for Missouri Conservationist magazine. “Among those who know and love birds, the starling is almost universally hated. They are seen as noisy, dirty, greedy, and mean. People describe them as ‘flying rats.'”

Determined to lick the problem, Roanoke managers called Critter Control, a business that combats nuisances caused by all varieties of animals. Jeff Archer, the company’s branch manager, recommended casting nets over the tops of the trees to shield them from the birds. But Ernst estimates that netting the entire area would cost upward of $30,000.

So managers opted for another round with the starlings-in-distress recordings. This time, Critter Control offered a new twist: Their recordings have the calls of birds of prey mixed in, to evoke a more fulsome sense of danger. For $175, the folks at The Roanoke rented two audio devices to play loops of the riotous bird calls. Archer told them if they broadcast the recording every night for at least two weeks, they’d have a good chance of expelling the birds from their neck of the woods.

But any success for The Roanoke will become misfortune for some other Kansas Citians who will no doubt curse the American Acclimatization Society as they suffer the tyranny of the Bard’s birds.