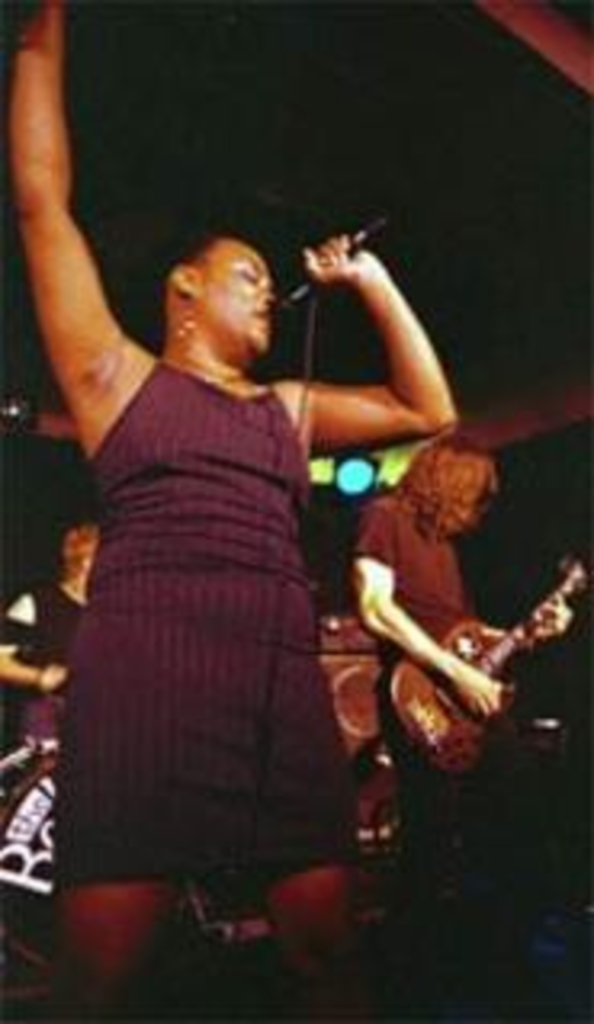 In today’s litigious society, a show such as the one at Davey’s Friday night is a disaster waiting to happen. First up came Electrophonic Foundation, a group that has posted much of its slight oeuvre on MP3.com for the perusal of fans and converts. Already, you’re listening to a band that has cast its lot on the wrong side of law-and-order types like Metallica. But bands have to do crazy things to get heard anymore, and giving computer literates the opportunity to e-mail your songs to friends is a sure-fire way to get noticed. It helps if the songs are good, but that may come later for EF, which for now emphasizes volume the way Penthouse emphasizes breasts. In other words, the songs of Scott Chaffin and Seann McAnally are chiseled fakery rather than sculpted finery, and 100 percent in your face. (They also emphasize baldness, with three members resembling Right Said Fred and one Steve Buscemi lookalike.)

The quartet, with Chaffin and McAnally trading lead vocal and guitar duties, plowed through a good chunk of its one-album catalog Friday, something that can be done without having to remember more than a few chords and riffs. They even managed to scam the riff from Zeppelin’s “Whole Lotta Love,” draining it of triumph and replacing it with intrepid lunacy as though fooling fine diners with Folger’s Crystals. Not that the audience, seemingly composed of family members and fellow scenesters the Last Call Girls, whose singer joined EF on stage for a stunningly awful cover of “Folsom Prison Blues,” would have been admitted to a four-star restaurant. It takes a certain kind of misplaced enthusiasm to root for a song like EF’s “Things Are Changing,” which was introduced as being “about when your girlfriend starts fucking somebody else” and features the chorus I gotta call your ass every night. The audience had just that enthusiasm, sitting through a set that included both “White Trash” and “White Negro.”

Then came Watts, the hard-charging band formed from the ashes of Mono Men. Holdovers Dave Crider and Aaron Roedis, on guitar and drums, respectively, churned out a monochromatic mix of swampy rock that conveyed ceremonial thuggery, as though accompanying Metallica drinking the blood of Green Day. Chris DeBon’s bass shook the patrons past the point of easy Saturday recovery, and he was the most inventive player on stage. Watts’ songs, in structure, style, and execution, are far from unique, but not as far from Mono Men as probably intended. That made for 45 minutes to be endured painfully rather than celebrated as merely the rebirth of an ordinary band. And, in keeping with the lawsuit-ready theme of the night, there’s already an established punk-pop group called Watts that hails from Boston. See you in court, guys.

Around 1, after selling T-shirts to a couple of diehards, The BellRays finally emerged to trample the first two bands with a scorching, rabid attack. For both good and bad, the band replicated its album’s sound thoroughly. The good news: Lisa Kekaula has a voice Tina Turner should sue to recover for her own, as it’s been more than a decade since the Private Dancer displayed the guts that Kekaula has in abundance. The bad news is that Let it Blast was recorded live on an ancient Sansui tape deck in a tiny rehearsal space, and The BellRays seemed uninterested in expanding their sound or their songs. Packing a walloping amount of material in a short space, the quartet actually sped up its already adrenalized soul/rock stepchildren until they were almost too punky to inspire dancing. Tony Fate played heroic guitar, fast and eager and in tandem with Kekaula’s orgasmic shrieking as though the two should be left alone. All four members played with the desperate abandon of people who had waited too long and through too much to have their day in court. Anyone who sat through Electrophonic Foundation and Watts must have felt the same, giving The BellRays the qualities of mercy and accord with the delighted remnants of the evening.