The Bartender’s Notebook: Looking for Chartreuse at Manifesto 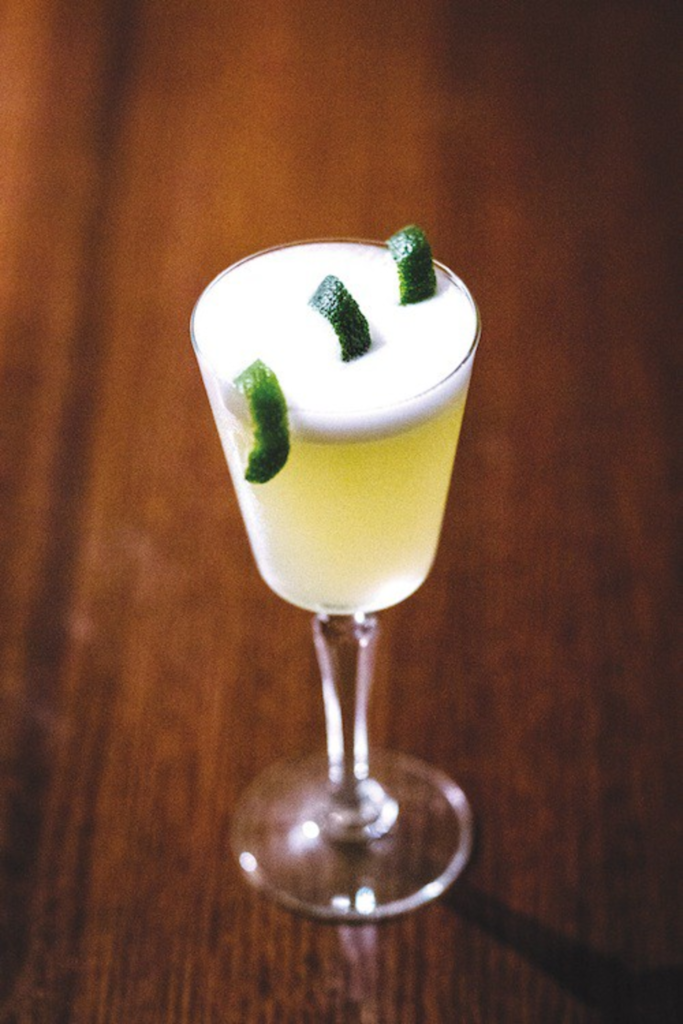 When I ask for Tex at Manifesto, the man in question laughs and darts his eyes around the dark basement bar, as if he’s surprised to hear that a patron might know him by his longtime nickname. But the man known aboveground as Jonathan Bush has a reputation among cocktail-loving Kansas Citians. So my self-imposed mission – getting savvy bartenders to make me interesting drinks with unusual ingredients – requires that I check in early with Tex.

“How do you feel about Chartreuse?” I ask him. He smiles and extends his right forearm, which is tattooed with the liqueur’s logo: a sovereign’s orb.

“Perfect. Something, anything, with Chartreuse, then.”

Tex nods and sets about pulling out bottles. I’m early – Manifesto isn’t open yet – and other employees are bustling about, polishing candleholders and proofing glassware, preparing for the evening’s service.

I can’t quite keep up with what Tex is doing, but after he has shaken a mixture, he pauses in front of the coupe glass he has selected for the cocktail. He shakes his head and replaces it with a contemporary martini glass. He pours out a cloudy, frothy, green-yellow beverage – the color of the evil smoke that Disney’s Maleficent favors – and garnishes it with a long twist of lime. The fruit peel is humanizing. Without it, this drink would look deadly.

As my photographer holds the invention hostage, I ask Tex about the liqueur he’s so fond of. I’ve heard bits and pieces of its interesting history, but he shines a spotlight on the whole legend.

“Chartreuse has been around for a long, long time – about 350 years, I think,” Tex says. “It’s got over 130 different spices in the actual liqueur. It’s made in France, by an order of monks [the Carthusian]. There’s a really tiny number of them who know the actual recipe – two or three monks. I’ve heard that only one of them can be in the air – like, on an actual plane – at one time. They can’t both be on a plane because if the plane crashed, the recipe would be lost forever.”

I stare at Tex, smiling at his Da Vinci Code tale. “How does the recipe get passed on?” I ask. “When a monk is on his deathbed?”

“That’s the story,” Tex says with a laugh. “Pretty crazy. To me, Chartreuse is so complex. It’s got sweetness, almost like honey, and then this warming feeling when you taste it by itself.” He pours me a shot of the liqueur, and the pollen-colored syrup goes down smooth and slow, like an alcoholic elderflower honey.

I ask Tex to tell me about the drink he has created.

“I did a play on a cocktail called the Last Word,” he says, referencing a popular Prohibition-era cocktail that usually features gin. “I love mezcal and I love Chartreuse, so I kind of wanted to use those two things together.”

The drink Tex has made honors the complexity of his beloved liqueur. The froth and lime come through immediately, suggesting a Pisco Sour, but the Chartreuse – with its own elaborate array of flavors – sweetens it, imparting a heavy body and downplaying any tropical notes. The mezcal hits last and lasts longest, with a pleasant smokiness. It’s startling at first, this drink, but easy to love.

THE WICKED WORD
$11 at Manifesto, or play along at home:

Tex says: “Just take the egg and separate the yolk. Toss it. I used dry curaçao, which is a little drier than Triple Sec – that’s why I added the simple syrup, because it’s a little too dry without it. To the egg white, add the curaçao, the Chartreuse, the mezcal and the lime juice – which just works with the other flavors. I shook it without ice first, to give it more froth, and then shook it again with ice to cool it down. Garnish with a lime twist.”