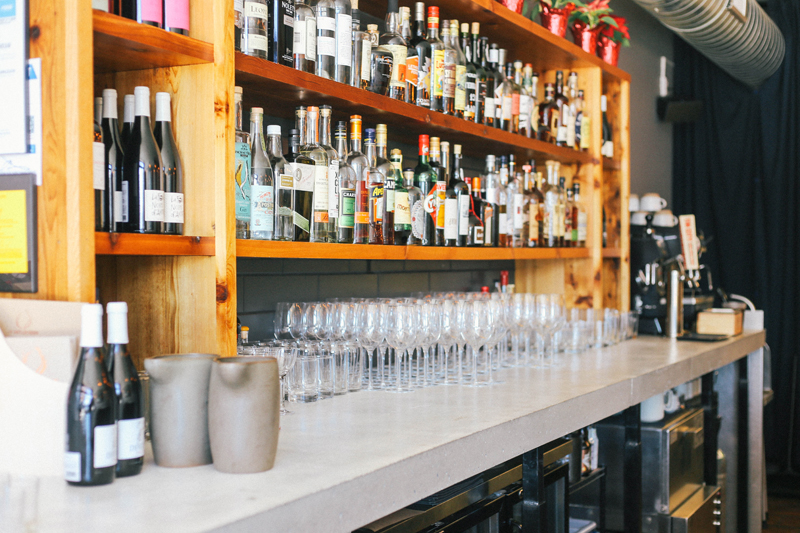 The imported custom-turned-gimmick of small, shareable plates does not easily align with the American way of eating. We guard our fries zealously from encroaching girlfriends. We live the Louis C.K. joke that a meal isn’t over until we hate ourselves. We prefer a one-Randian-superman, one-plate dining experience.

So the all-tapas night out is not embarked upon without a sense of risk. And it’s a risk for restaurants, too — with small plates and a big crowd, chefs may have only one bite to bowl over a diner and leave a lasting impression.

At the Antler Room, a three-month-old restaurant near Hospital Hill, chef Nick Goellner and front-of-house manager Leslie Newsam Goellner (they’re married) have taken up this challenge and are mostly winning.

In a short time, the Goellners have transformed the cozy-casual space at 2506 Holmes, formerly home to Chips and Dips Mediterranean Café, into a romantic dining room. Custom woodwork, chevron cedar–plank walls and warm yellow lighting complement midcentury-modern-style chairs and twill cushions appropriate for the flannel-and-jeans set.

The menu rotates frequently, sometimes nightly, based on what Goellner and his sous chefs, Nick Chiaro and Andrew Heimburger, dream up. It’s an idea that rewards the adventurous repeat customer, who has something new to sample each visit. Fine-dining traditionalists have a few anchors, though: On the menu, the small plates are loosely coursed, with line breaks to separate appetizers, pastas and proteins.

On my three visits, the plating at the Antler Room was as fastidious as a shot in a Wes Anderson movie — nothing was too cute to eat, but nearly everything was too appetizing to ignore. Even the most frugal starter, fried Castelvetrano olives stuffed with gooey Taleggio cheese, was handsomely swaddled, leaving no trace of grease on their cloth-napkin nest. Other first-course showstoppers included a brisk Icelandic lamb carpaccio and a plate of cauliflower coddled in butter and seared in a light coating of crusted almonds. The garnishes for each dish — postage stamps of raw pumpkin, slices of pickled celery root — cheered the palate as much as the plate. 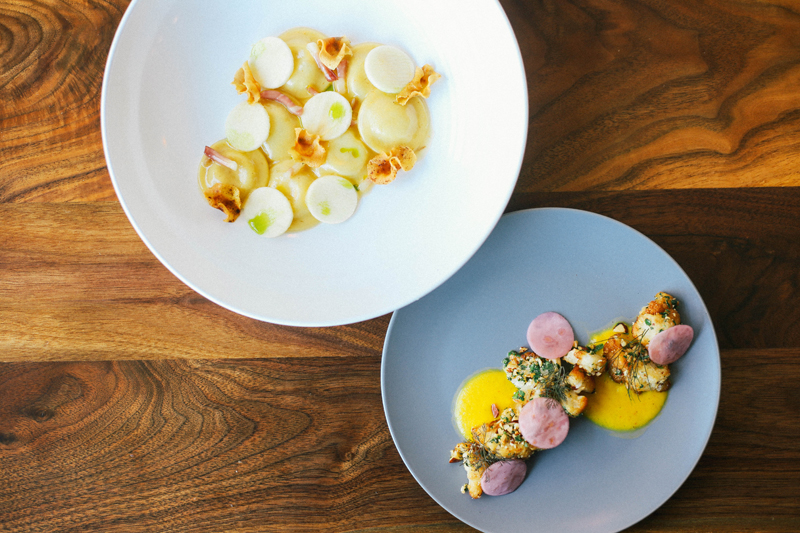 On my first visit, the grand prize went to the Antler Room’s crisp fingerling potatoes, plated like stately nigiri. Each piece was a discrete masterpiece, draped in attic-aged ham and dusted with parmesan. Light touches of horseradish and eggplant yogurt added hints of heat and smoke. On a later visit, the same potatoes received a sloppier plating, buried under a blizzard of weepy parmesan. This bears noting, given that some diners will resent paying $12 for five bites of potato no matter how fine the taste and presentation.

Price aside, the Antler Room’s chief obstacle may be that not all of the plates truly invite sharing. Nearly everyone at my table was enamored of one such dish, vertuta: a sharp, cheese-flavored strudel with a firm brown bottom and a hearty chew. But it arrived, sans knife, in one plate-sized round, forcing us to grope the bread into smushed submission and hiss, Gollum-like, at anyone tearing off too large a piece. (In our defense, the pastry came trimmed with an inordinately tempting spinach-and-walnut pesto; no crumb was spurned.)

I was similarly puzzled by a scant serving of onion ash tajarin, an eggy ribbon pasta coated in a pungent onion soubise. I was happy to scrabble over the mini nest of noodles with my husband, but I can’t imagine slurping them, Lady and the Tramp–style, with a first date or a business associate.

More successful (and spoonable) was a generous portion of pillowy pearled farro. The nutty grain melted into a supple, risotto-like texture and arrived topped with shaved bonito flakes that danced uncannily — to be frank, sluttily — in the steam from the dish. Tart sumac and a smart application of koji sliced through the starch and amplified the bowl’s earthy, winter-warming flavors.

But the star of the pasta course was a serving of parsnip-and-chestnut raviolini (each the size of a half-dollar coin) dressed with smoky lardons, cultured butter and curling blossoms of parsnip chips. Crisp communion wafers of lemon-brightened apple and a drizzle of vibrant green parsley oil kept each bite balanced and light.

The protein-minded plates are well-suited to sharing. I tend to be suspicious of octopus on Midwestern menus, insulted by too many tough, rubbery tentacles before. But the Antler Room’s version is an imperative as long as it’s on the menu. Each bite of octopus was yielding and meaty, a firecracker of flavor lent extra sizzle by a paste of spicy ’nduja sausage and an earthy white-bean puree. The octopus was so tasty that one of my dining companions (who was already on the fence about eating an animal that can solve puzzles and open jars) pushed it away after a single bite. “It’s too delicious,” he said solemnly. “I didn’t want to know.”

The “turf”-centered plates I sampled were competently executed but less exciting. A dish of sliced rabbit loin floating on a smooth walnut-tarragon sauce was almost too rich, the hare a hair tough. And a daintily plated fan of sliced hanger steak was tender but comparatively bland, left lonely with just a dab of celery-root yogurt. 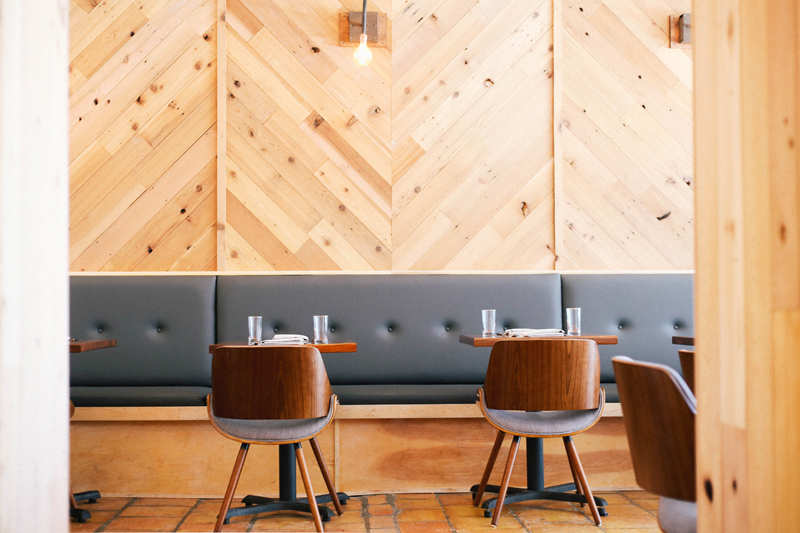 The exception was the large-format pork shoulder, which was some of the finest pig I’d ever sampled. The meat was perfectly tender, with a salty, crusty rind, a soft pink center, and a fatty mantle that melted on the tongue.

Each night, the Antler Room serves one such entrée, typically an imposing “thing” of meat: the offerings ranged, on my visits, from lamb leg to pork shoulder to roast duck. The menu warns diners to prepare for a 30-minute wait, but my pork shoulder arrived in under 20, accompanied by charred romaine (which veiled anchovies as thin and crisp as crepe paper), grill-spotted flatbread, fried potatoes and a dipping sauce of fermented honey and mint.

If you’re secure in your choices, the large-format entrées are one of the restaurant’s best values. The $40-some spread easily feeds two hungry Americans or four polite Europeans.

Service in the main dining room was warm and relaxed — despite the mercurial menu, the servers seemed generally knowledgeable about the food or, at the very least, quick to offer a correction from the kitchen. Service at the bar was pleasant if less enlightening: Our bartender on a sleepy weekday evening shrugged off more than one question about what, exactly, was on the plate in front of us.

Still, the drinks are as cool as the concrete bartop they’re served on. The Antler Room has a worthy selection of nameless, midpriced cocktails. As with the food, they rotate frequently — “Don’t get attached,” the anonymity suggests — but you can count on about five to choose from, at least one of which will probably feature an amaro.

For the most part, the drinks here are smooth sippers, chastened with cava or soda. Among the finest was a concoction of tequila, Campari and basil simple syrup (topped with lime and soda). The finish was crisp and complex, the Campari’s herbal notes shining through and eliding the syrupy sweetness. Another star was a smoky, amber-colored blend of amaro, lemon, rosemary syrup, and sharp dry cider — the kind of drink that begs for a fireplace and a cigar.

Although the Antler Room’s kitchen staff prepares the desserts nightly, there’s yet another Goellner to credit here — Natasha, Nick’s sister and the proprietor of Natasha’s Mulberry & Mott and, more recently, Cirque du Sucre. On each of my visits, her inventions fused familiar comforts with international wanderlust. A plate of puffy orange madeleines served with drinking chocolate was tempting, though I’d take crisper edges. A steaming date cake with curried fruit was warmly seasoned, though I’d take a stronger coconut flavor in the accompanying scrolls of meringue. But I had no nits to pick with a creamy pear kulfi that walked a tightrope between delicate (a subtle pulse of fragrant rosewater) and daring (a sour bite of plain yogurt).

The Antler Room’s creativity and style already rival some of the metro’s best restaurants. But for now, the uneven size and shareability of the small plates makes this a place better suited to cozy couples than to crowds.