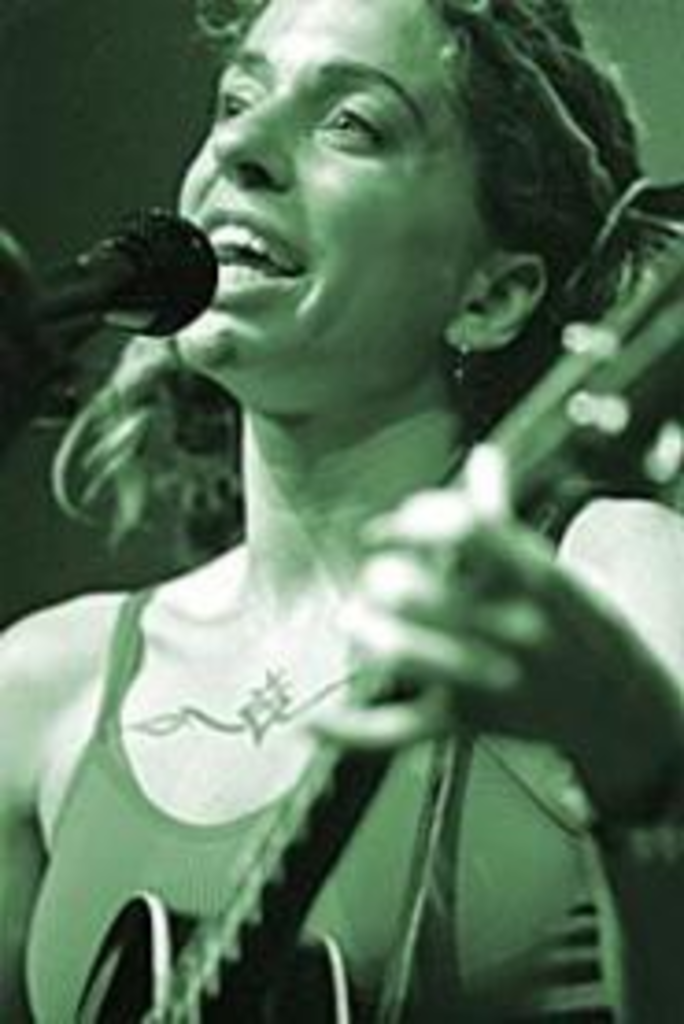 At about 7 a.m., a few intrepid fans started getting comfortable in front of the Uptown Theater, a scene that marked a throwback to the days before ticket lotteries, a time when camping out for tickets was a necessity rather than a sure sign of fanaticism. This earthy-looking all-female group, some of which thoughtfully brought chairs to add to their comfort level during this 12-hour stay, waited patiently throughout the duration of this perfect (fortunately for them) spring day, hoping to catch a glimpse of Ani DiFranco, to buddy up with her bandmates or record-label crew, or at least to get a few feet closer to the stage than the relative stragglers who would arrive a mere hour before showtime.

DiFranco fans are a distinctive breed, one of three types of concertgoer (along with Slayer’s crowd and the howling fans of Backstreet Boys/’N Sync) that merit a category of their own. Unfortunately, a tour combining these three, which might provide data that could keep anthropologists occupied for years, is about as likely as a Nirvana reunion featuring all original members, so comparisons among these groups must be made by studying them individually in their natural habitats.

Once they entered the Uptown, DiFranco’s fans displayed an inclination to burst into applause for no apparent reason, saving their loudest huzzahs for the bewildered soundman, whom some might have mistaken for opener Jim White. Slayer fans don’t so much cheer as they yell the band’s name nonstop from the time they enter the line outside to the time the headliners take the stage. On concert night, boy-band fans maintain a unison squeal that varies in volume but never completely subsides.

After milking the bursting udders of the insanely eager crowd by asking if they were ready for the evening’s entertainment to commence, White delivered a five-song set that was greeted with polite applause, which won the DiFranco crowd a point for congeniality. By contrast, boy-band fans tend to gaze at opening acts with pouty contempt, as though they were being forced to sit through a three-hour mass on Christmas morning before being able to open a huge mound of presents. Slayer fans show the least consideration for the openers, continuing to yell their favorite band’s name while these unfortunate acts attempt to soldier through their sets.

When DiFranco started to perform, her rabid following hung on her every word, wildly applauding individual lines in songs. Her audience is less obnoxious than they were before she married (blatant midsong sexual come-ons and drunken shouts of “Can I buy you a drink, Ani?” are much less prevalent), and even those who persist in pursuing their Quixotic fantasy are sonically outgunned now that DiFranco is backed by a full band. DiFranco’s solo shows were often marred by fans warbling “clever” come-on lines in the middle of subtle acoustic songs, which occasionally inspired the Righteous Babe to command her admirers to “Shut the fuck up.”

Still, her new and improved fanbase had its moments, drowning out her a cappella version of “Both Hands” with an en masse rendition that eventually led DiFranco to stop singing and conduct the off-key orchestra with her hands. Like the Simpsons crowd that cheered blindly whenever “Springfield” was mentioned at the U2 concert, regardless of context, the DiFranco followers hooted whenever “bed” or “bed frame” showed up in the lyrics, during songs such as “Pulse” and “Both Hands.” The folk junkies also guffawed like overacting teacher’s pets every time DiFranco indulged in mildly humorous stage banter. For her part, DiFranco pandered shamelessly to the crowd with a dorky physical comedy routine, which culminated in a slapstick-style kiss with keyboardist Julie Wolf that left many in hysterics.

Slayer fans cheer with equal vigor as their idol, singer Tom Araya, issues bizarre declarations such as “He who lives by the sword … dies by the sword!” and “There are many ways to achieve … death!” while making use of dramatic pause and inclination. Once the songs begin, this throng is too busy engaging in mortal combat to the breakneck beat to respond to specific lyrics. Boy-band fans, having set their squeal-level on “deafening,” sing along intermittently between shrieks, but show no real attachment to the lyrics, as even the tykes among them realize that their heartthrobs had nothing to do with writing them. However, these YM-subscribers do share an appreciation for scripted affection with the DiFranco crowd, as many are rendered catatonic when a preselected prepubescent girl is brought on stage to buss the boys.

DiFranco fans have their advantages over their fellow fanatics. They’re more socially conscious (the most applauded Ani-isms were political statements), and they’re better dancers (although for some reason most of them become rhythm-impaired when it’s time to clap along with a beat). They’re also capable of being the rudest (at times, DiFranco has become visibly exasperated at her fans’ nonstop yipping) and the most immature (10-year-old boy-band fans can be forgiven for drowning out songs by yelling “I love you”; college-age folk fans should know better).

Still, they unquestionably have more fun than the average concertgoer, and they leave with fewer bruises than Slayer’s motley crew and with more of a feeling of having connected with the artist than the Backstreet Boys’ detached arena-filling playpen. It’s difficult for an outsider to understand why they would spend a day waiting outside a theater, why they would drive hours and hours to see a similar set delivered with only slight variations in banter and song selection, why they would eschew following the usual concert protocol of waiting until a song ends to applaud so as not to drown out lines. But although their motives might be obscure, their happiness is real. When the DiFranco circus comes through town again, the sunrise crowd outside the venue will probably be even longer, and an exit poll of these vigil-holding fans would surely reveal that they considered their 16-hour day well spent. And, as DiFranco might say, who are we to question the customs of a foreign culture?