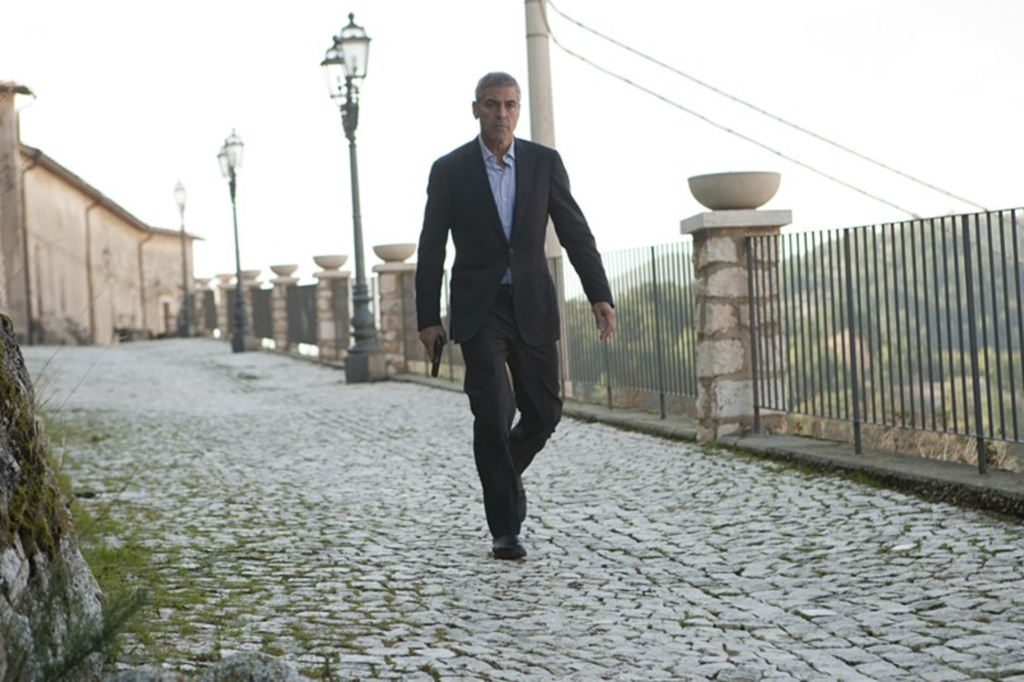 Sometimes you feel bad for movie marketers, tasked with connecting any given film to as large an audience as possible. Take, for example, The American. Judging by the film’s trailers and advertisements, it’s a fast-paced Euro-stylish thriller starring George Clooney as a dashing, conflicted hero. Yet it quickly becomes apparent, once the actual movie starts, that The American is more an abstraction of such a notion, a deconstructed action picture in which not much happens (until it does). “Bourne meets Antonioni” is not a marketer’s dream tagline.

In quick order, Jack is flushed out of his cozy lakeside hideaway, somewhere in snowy Sweden, and is on the run, landing in a remote mountainside town in Italy. Full of cobblestone stairways and mysterious doorways that bring to mind the mad shadows and hard angles of Giorgio De Chirico paintings, the place would be picturesque and even romantic were it not so spooky and isolated.

Jack kills time there with a local prostitute (Violante Placido) while waiting for his contact (Thekla Reuten), a woman of unknown motivation and an uncanny ability to change her appearance. Even as he fastidiously goes about his work, Jack becomes increasingly certain that someone is after him — and getting closer.

Corbijn’s previous feature, the black-and-white Control, told of the rise and tragic fall of Ian Curtis and his post-punk band Joy Division, and it was more obviously in line with the director’s work as a rock-and-roll photographer. His cover art and band photos, most notably for U2 at their most myth making, are at once iconic and diffuse, carefully composed to seem subtly off-balance.

This aesthetic is also present in The American, which is easy to imagine in black and white, with its lonely cafés and barren spaces, though shot in color by Control cinematographer Martin Ruhe. Here, as in his previous work, Corbijn seems more interested in creating specific landscapes of feeling than in storytelling in the usual terms.

By slowing down the pace of what would more conventionally be a pulse-pounding chase thriller, the director successfully creates a feeling of unease, an on-the-leash tautness that pulls the genre into his own orbit.

Jack is trapped in his own purgatory, caught between here and there. Well before he meets his contact for a last handoff in a dusty parking lot, which brings to mind the courtyard where Jack Nicholson meets his final fate in The Passenger, Clooney’s character has given over fully to existential dread. The American becomes less about assassins and targets than about the tension between Jack’s external placidity and his internal tumult, the biggest adventure being the one playing out inside his head.

Corbijn’s tonal achievement has its downside. This rather odd insistence on pushing viewers away at every turn, keeping even the most committed at arm’s length, makes for an experience that can be more frustrating than fulfilling. And by the time The American gears up to become the film that most people will have shown up expecting to see — one with foot chases and gunfire — it’s just as abruptly over.

Despite the director’s approach, there nevertheless is something exciting about a movie that is this uncompromised, in which the big change from the book to the screen actually toughens up the story instead of watering it down. That is, as long as you’re not among the unfortunates trying to market this thing, trapped in their own purgatory, between the film they can easily sell and the bold, challenging one they have.