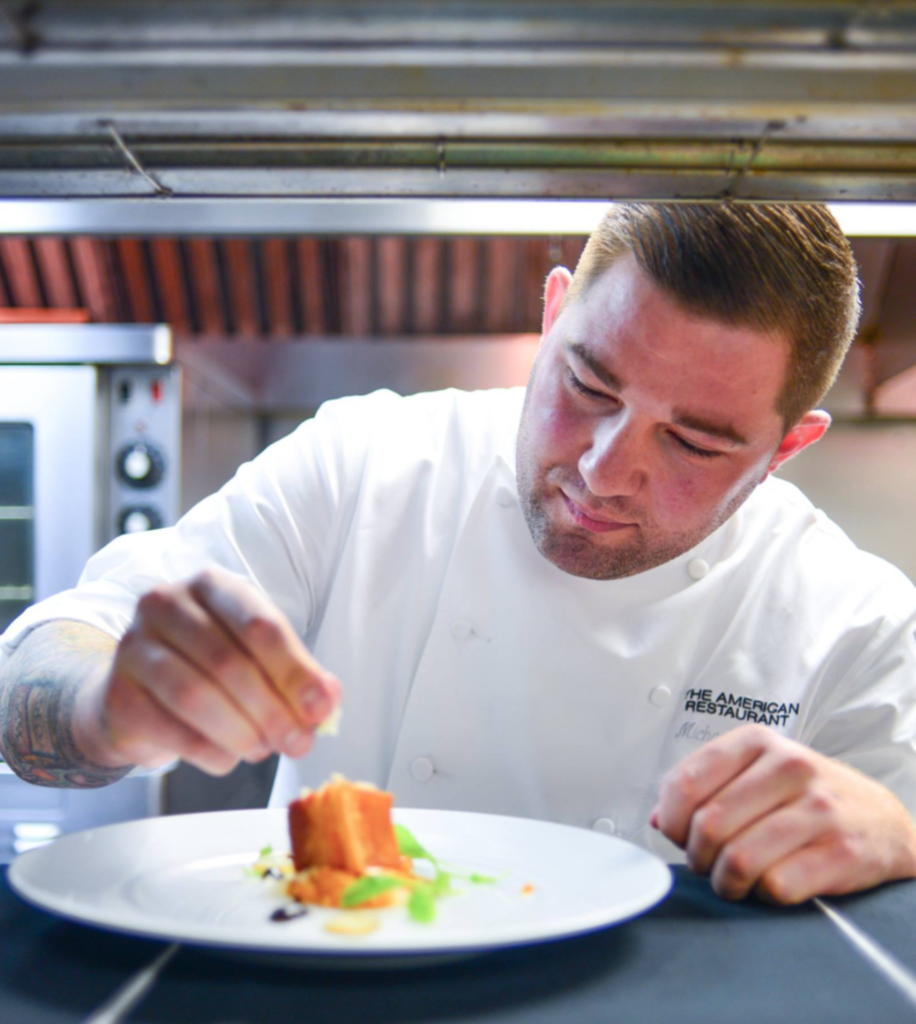 On Monday, September 28, the American Restaurant holds the 17th-annual Friends of the James Beard Foundation Dinner. As you can imagine, this seven-course feast will be quite the experience, with five chefs — from California, Texas and Norway — presenting their dishes alongside the American’s executive chef, Michael Corvino, and pastry chef, Nick Wesemann.

“For this dinner, I think I’ve only met one of the chefs in person,” Corvino says. “I obviously know who everyone is, but that’s a lot of the fun — bringing in chefs who have never been at the American before, chefs we want to meet and get to know better.”

Corvino’s dish will be the last entree in the dinner and, as the only beef plate, the heaviest.

“Typically, I might go lighter — something seafood — but I let all the guest chefs do their dishes first, and I filled in at the end,” he says. “So I’m doing Piedmontese beef strip loin. Piedmontese is an Italian breed that they’re raising in Nebraska. It’s very flavorful but leaner than most American beefs. I’m doing it with celery root, abalone mushrooms and melon. It’s kind of an interesting combination but very earthy. Abalone mushrooms are also white-elf mushrooms — they’re a Chinese mushroom that grows here, very floral and fun. And the sweet earthiness of the melon will add some fun, bright flavors.”

“I’m doing a pre-dessert to go before the dessert our guest pastry chef [Nick Muncy] is doing,” Wesemann says. “It’s the dessert I got inspired to do when we went to New York in January to cook at the James Beard House then. It’s an olive-oil-and-Campari cake, fresh grapefruit and some honey ice cream. I also aerated honey sabayon to give it some bitter flavors. So the dish ends up being kind of sweet and kind of astringent, so it’s nice between the chef’s course and the dessert course. Not too sweet, not too savory, but really refreshing.”

But perhaps more than preparing this splendid cuisine for his Monday-evening guests, Corvino says, the thing he is most looking forward to is the opportunity to spread the KC gospel. Most of the visiting chefs will get in around Saturday night or Sunday morning, and Corvino plans to make sure they eat brunch and “lots of barbecue” ahead of the James Beard dinner.

“That’s a big part of it,” Corvino says, “to sort of show off Kansas City and promote Kansas City nationally.”

Cocktail reception begins at 5:30 p.m., with dinner to follow at 6. Tickets cost $150 for James Beard Foundation members, $195 for the the general public. Proceeds from this dinner go to the James Beard Foundation’s scholarship program. As of this morning, a limited number of seats were still available; to make reservations, go here.