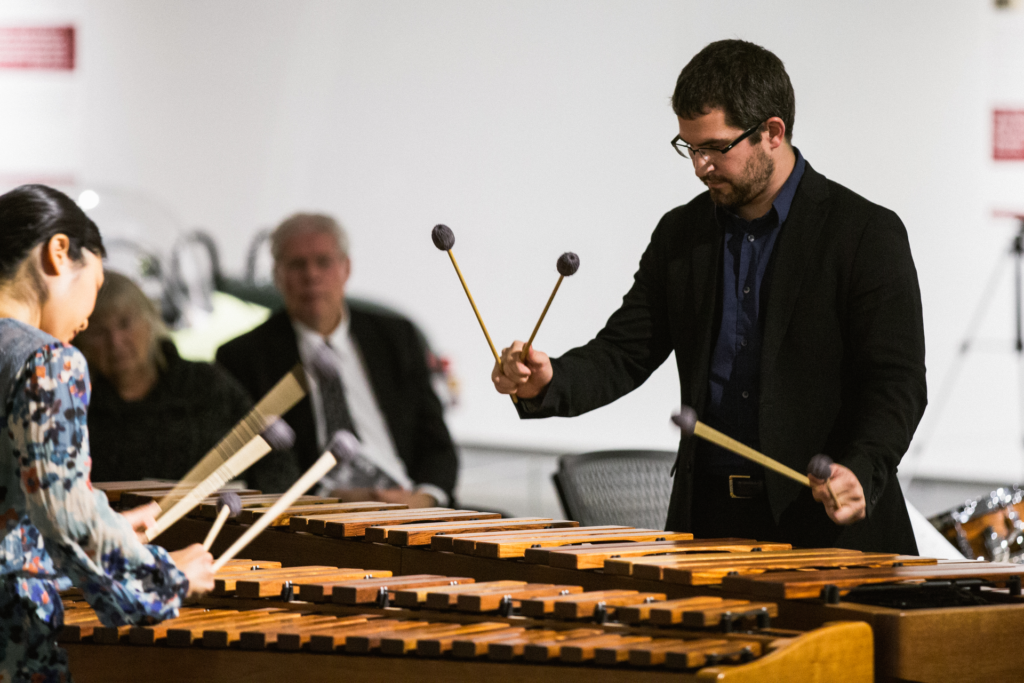 Percussion, at its most elemental, involves striking an object with another object. As refined by Arx Duo, however, the art of hitting things becomes an intimate, poetic dance of tones and colors.

The Arx Duo is newly local to Kansas City. Mari Yoshinaga, originally from Japan, moved here following her wedding to Kansas City Symphony concertmaster Noah Geller, and this past September Garrett Arney left the East Coast to join her, committing to the duo full time. They’ve been a professional ensemble for three years but started playing together as graduate students at Yale University. In the sheltered confines of New Haven, Connecticut, they honed their virtuoso skills and, while playing duets during the rages of Hurricane Sandy, realized their sympathies of style.

I met with Yoshinaga (Arney was out of town) at Brookside’s Unbakery & Juicery. Over some green tea and alkaline water, she told me about creating the duo, their artistic vision and plans for the future. “We liked the concept of the word arc because we want to be the bridge between composer and audience, or audience and performer,” Yoshinaga said.

She was back in KC after Arx Duo’s trip to the United Kingdom in November, where they performed Dominic Murcott’s “The Harmonic Canon,” a piece written for the duo and a half-ton, quarter-tone double bell designed by bell maker and artist Marcus Vergette. They helped develop the piece, experimenting with the bells to create the sound world, and then recorded their 45-minute performance for digital and vinyl release with Nonclassical, a music label in East London.

Though they often work within the auspices of universities (where it’s easier to access or borrow instruments, instead of taking their marimbas on the road), they want to explore outside the academic circle, too, playing in art museums, churches, barns and, as is the case at the 1900 Building, even refurbished office buildings. This is the pair’s third performance at the Karbank space, but its first concert in KC as a local group.

The January 18 program will showcase the breadth of Arx’s abilities, with commissioned works and old and new repertoire standards. “We want to share a bit of our sound with the Kansas City community and let them experience some of our world,” Arney writes in an email.

At the center of Arx’s sound is the marimba, but the duo present an array of percussion works, including “Seeds,” by Leonardo Gorosito and Rafael Alberto, a marvelous work of ingenuity involving a variety of shakers. The latter are more convenient than a pair of five-octave marimbas; the instruments fit in a backpack. Arx has played the work on four continents.

Likewise, Alyssa Weinberg’s “Table Talk” is for “vibraphone with junk on it,” as Yoshinaga laughingly described it, the bars layered with paper, cans, cymbals and bells, drawing from the practice of prepared piano. Many people, seeing a vibraphone, would expect something jazzy, but what comes out of the instrument is very different. And on marimbas, they’ve arranged neoclassical piano works by Igor Stravinsky.

Now that they are in the same city, Yoshinaga and Arney rehearse every day, at their studio space in the Quixotic Building, across the street from the Kauffman Center. While many of their current projects began with East Coast connections, they’ve started collaborating with fellow Kansas City–based artists and organizations as they develop work for audiences here. “I would love to have that feel of community and I think there’s room in Kansas City, new music–wise,” Yoshinaga said.

Watching Arx Duo perform can be a hypnotic experience: There’s a sense of harmony to Yoshinaga and Arney’s movements, an obvious awareness of each other’s presence in a way that seems choreographed but stems from a natural synchronicity. You see the evolution of that sympathy of styles, a cohesion as the two musicians go, as Arney describes it, “moving from note to note or drum to drum with a similar ‘arc.'”

“It’s a very physical instrument, and if you move completely different you probably wouldn’t be playing very tight,” Yoshinaga said of the marimba. “I feel like we are just one percussionist with four hands.”

Other January classical and concert-music highlights:

Boston Camerata’s Play of Daniel resonates in a tumultuous political and social environment with a restaging of this medieval play that speaks truth to power.

Violinist Maxim Vengerov returns to Kansas City after two decades away, with a program of shatteringly virtuosic works. With pianist Roustem Saitkoulov.

Unity Temple of the Plaza

2Cellos, a Croatian-Slovenian cello duo, got its break on YouTube playing pop and rock covers and now sells out concert halls and arenas worldwide.

Kansas City Symphony plays Gustav Mahler’s Symphony no. 7 for the first time, adding this monumental undertaking to its repertoire.