The ACBs walk a rocky road to Stona Rosa 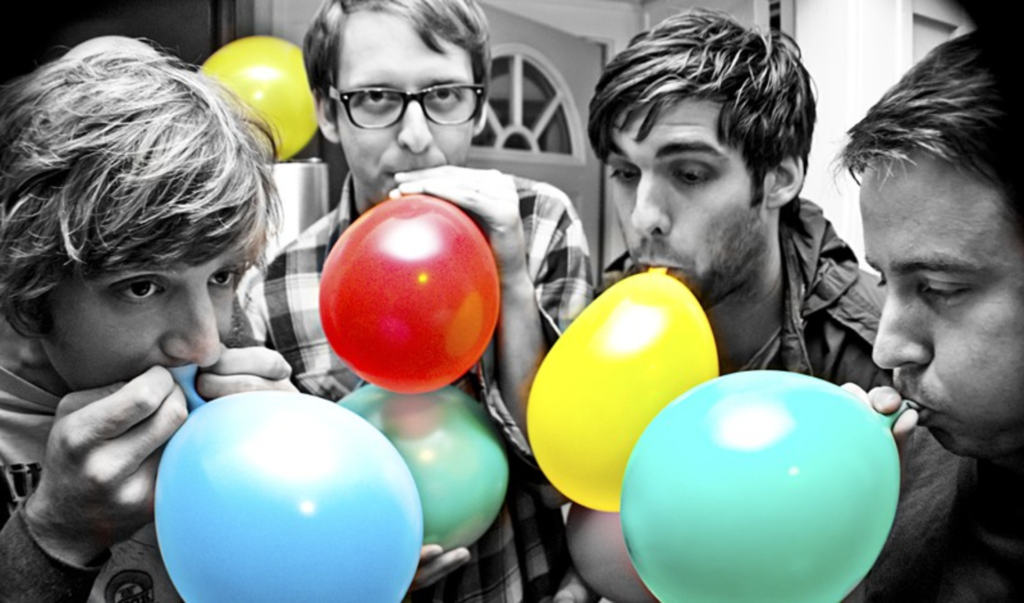 Most Tuesday nights after band practice, the ACBs score a late dinner at the Popeyes at 63rd Street and Troost.

“They’ve got a deal on Tuesdays where you get a two-piece chicken, a biscuit, a side and a drink for $2.99,” bassist Bryan McGuire says.

“No, the drink’s not included,” frontman Konnor Ervin counters.

“Oh, right — you have to pay extra for the drink,” McGuire says. “Still a great deal.”

They’re not joking. Well, they are, but not about their eating at Popeyes. Rather than convey embarrassment about how lame it sounds that a rock band regularly dines together at a Cajun-themed fried-chicken chain restaurant, the bandmates own the moment by turning it into a joke about how poor they are.

There’s a lot of that twisted self-deprecation on the ACBs’ terrific new record, Stona Rosa. “Street Fighter II,” a jangly, quick-tempo stomp, is about sneaking from the bed of a woman and being extra quiet while eating cereal and playing Super Nintendo. “But I guess it’s really more about me getting older and still feeling very immature,” says Ervin, the band’s primary songwriter and lyricist.

These songs seem an extension of Ervin’s personality. They’re funny and charming but a little alienated, too. The band’s self-titled debut was mostly straightforward power pop, but Stona Rosa is quieter, sadder (and more stoned). It would be a mistake to read laziness into the ACBs’ lyrics, though. Nobody in the city is writing sharper or more inventive melodies than Ervin, who has honed his craft the old-fashioned way: working a part-time job, living in a shitty apartment and practicing music all the time.

“It’s true that, as people, we don’t take ourselves all that seriously, and I think that comes through in our music,” Ervin says. “But I spend the majority of my time awake, working on songs. I take that very seriously. The other stuff: image, promoting, selling yourself — it’s hard to get excited about that stuff.”

“When the band was just starting out, we were naïve about how to go about getting shows and getting press and all that,” McGuire says. “We were confident about our music but insecure about people in the scene liking us. And we’re looking at the people who are succeeding, and they’re all acting like Lou Reed. We were like, ‘Is that what we have to do to get people to like our band? Act like jerks?’ “

“So we did, like, a photo shoot where we all stared into the camera like a bunch of pricks,” Ervin says. “We had no idea what we were doing. But over time, you get more perspective about things and you realize that all the people you’re intimidated by aren’t actually that cool, and you just try to present yourself and your band as sincerely as possible.”

The path from the ACBs’ self-titled 2007 debut to Stona Rosa has been rocky. For the better part of three years, the band members bounced around studios throughout the Midwest, failing to find the sound they were seeking for their next album. On a trip to Norman, Oklahoma, to record at Bell Labs with Trent Bell (Flaming Lips, Starlight Mints), their van caught fire. They recorded a song but were unhappy with the results, and they drove back to Kansas City in a U-Haul.

“The recording process just became so demoralizing,” Ervin says. In 2009, the band finished an album but decided to shelve it. “We got picky about it,” Ervin explains. “I just never felt like we sounded the way I wanted us to.”

Ervin wrote most of Stona Rosa in the aftermath of that abandoned album. (Drummer Corey Egan and guitarist Matt Saladino decamped for Los Angeles in 2010.) Earlier this year, Ervin took his new songs to Mike Nolte at More Famouser and began recording. As the album progressed, Nolte played tracks from it for Andrew Connor, his bandmate in Ghosty. When Saladino moved, Ervin asked Connor if he knew any talented guitarists who might be interested in the ACBs gig.

“I suggested someone, but I also said I was tempted to do it myself,” Connor says. “I’ve always really respected the conciseness of what the ACBs do, how they don’t waste anybody’s time. So I felt like playing with them was an opportunity I didn’t want to pass up.”

“I honestly didn’t think he [Connor] would be interested because he’s got his own band, and he’s this great songwriter himself,” Ervin says. “It’s been amazing having him in the band. He makes every song better and he makes me better. As a songwriter, I don’t want to bring any weak songs to practice because I respect him so much.”

To replace Egan on drums, the band recruited Kyle Rausch, formerly of the Abracadabras. “Kyle has great musical instincts in general,” McGuire says. “But on drums, his fills are fresh, his rhythm is perfect. He’s also probably the best singer in the band.”

“That’s another thing,” Ervin says. “Our new songs are all a lot more technically complicated. Everybody’s voice and instrument are being used for the majority of every song. The old way of doing things with the ACBs was to pare it down and play our songs as simply as possible. The new way is to exhaust everyone’s capabilities.”

Now the band members are talking about rerecording the shelved album (which they describe as more of a rock album than Stona Rosa) with Rausch and Connor for possible release as early as next year. But though the new lineup is a cohesive unit musically, true collective identity remains elusive.

“Andrew won’t eat at Popeyes with us,” McGuire says.

“I used to think when they would talk about ‘noshin’ at Popeyes,’ they were joking,” Connor says. “Then I realized they were serious.”