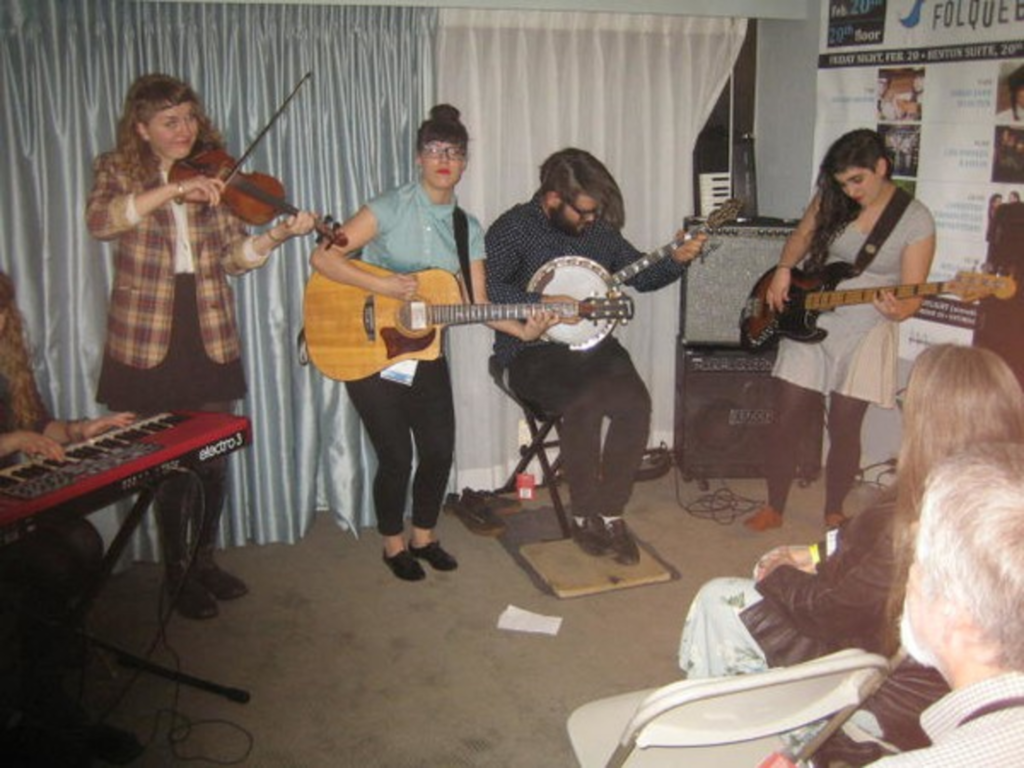 By Saturday morning of the Folk Alliance International Conference, you can feel the energy of the musicians, organizers, volunteers and attendees emanating from worn-thin bodies: Four nights of no-holds-barred music – even the top-notch stuff at FAI – is enough to fray the edges of anyone’s sanity a bit. But it’s all such a joy, too, a wonderful overwhelming of the senses, that a little exhaustion is to be expected.

This year’s conference had the welcome addition of a film festival, organized by Joe Heyen. The noon showing of Beth Harrington’s The Winding Stream: The Carters, the Cashes and the Course of Country Music, a documentary that was nearly a decade in the making, was the perfect place to recharge and coffee up. After that: Bring on the folk. 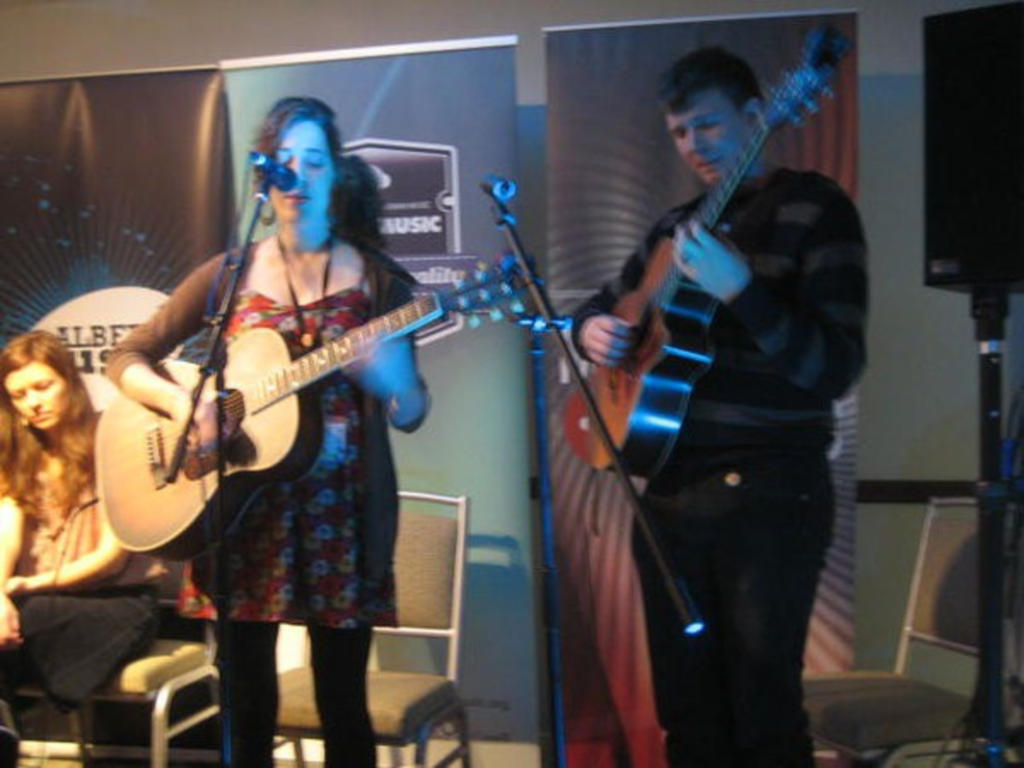 The daytime showcases, as always, provided that key step forward in the Replenishment Action Plan. Sarah Elizabeth and Tyler Lieb, natives of British Columbia via Montreal, used their showcase for intimate songs like “Complicated Land” (just down from “Distracted Land,’” said Elizabeth). 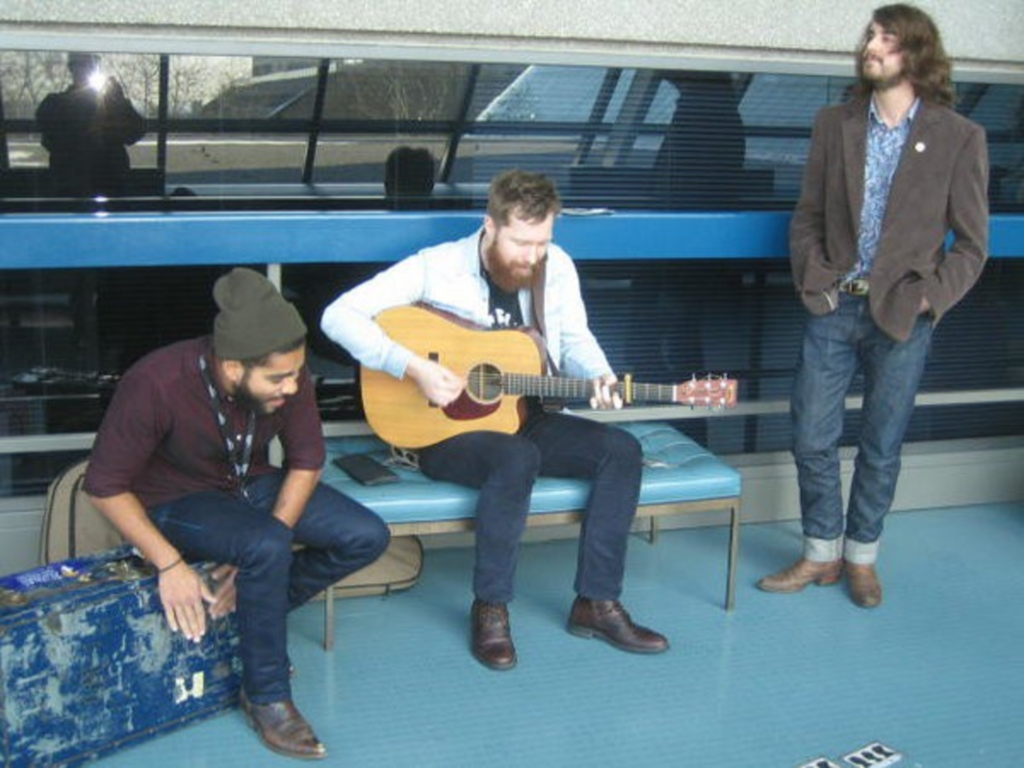 Gradually, things built up. The Link – that “thank God this is here” walkway between the Sheraton and Westin – provided space for musicians to preview their shows, and it was a good place to hang out in the afternoon, turtle-style, and soak up the sun. 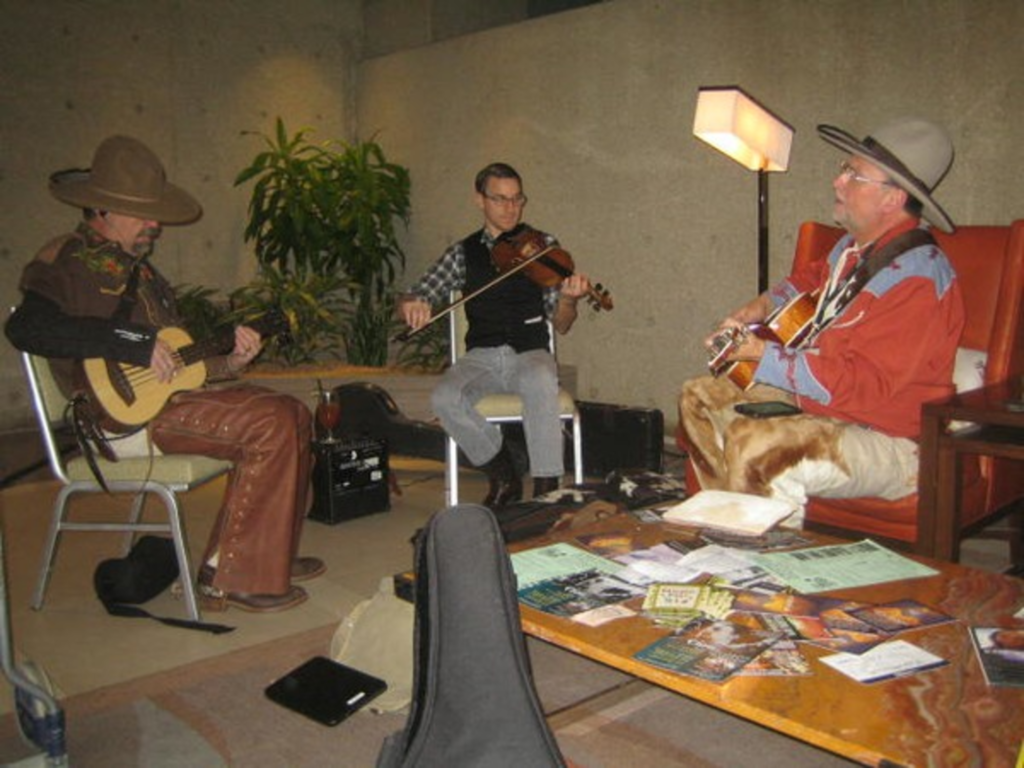 The evening showcases eventually splashed in with a spectacular rush. The official showcases kicked off with Ashland, Oregon’s alt-folk orchestra Patchy Sanders. One member came to the mic a touch heavy-lidded, laughing that he “wasn’t fit for the folk star lifestyle.” Well, he was wrong about that: The band was an acoustic whirlwind somewhere between Fairport Convention and the Texas Playboys. The night was on.

Back in the Sheraton, Red Molly took a ballroom stage in a room packed with people – primarily people who’d never seen Red Molly before. (There was a show of hands.) One of the trio’s highlights (with Mark Erelli joining on guitar and mandolin) was a cover of Robert Johnson’s “Come On In My Kitchen,” re-imagined, in one member’s words, “as if sung by Aretha Franklin.” It was every bit as good as that sounds.

A short walk back to the Westin found one of the conference’s best parties, the Canadian Blast, getting down on the top floor. Digging Roots, an indigenous folk revue from Quebec, pulled the crowd into a circle dance for a pulsing blues number. 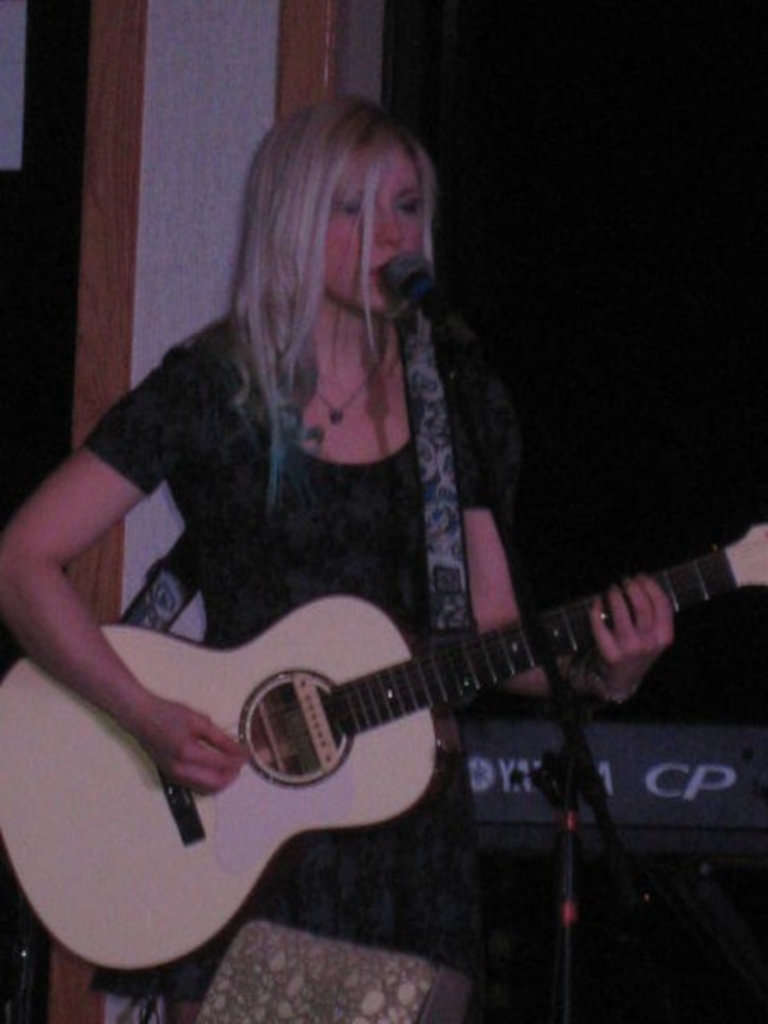 The mood changed slightly with singer-songwriter Ariana Gillis, one of the conference’s most whispered-about showcases, but there was every bit as much energy. It’s tough to imagine a 22-year-old rocking through a rugged, arena-ready heartbreaker like “Blush” – unless that 22-year-old happens to be Gillis. It turned out the set was a family affair: Gillis’s father David accompanied her on banjo.

She closed with “Broadway,” a song that helped her emerge from a time when she was considering giving up music (a somber and fairly universal theme in the folk world, if this weekend’s songs are any indication). She told the story of the show that rescued her, when everyone was “was so supportive…it reminded me why I play music. Because it feels good to me.” 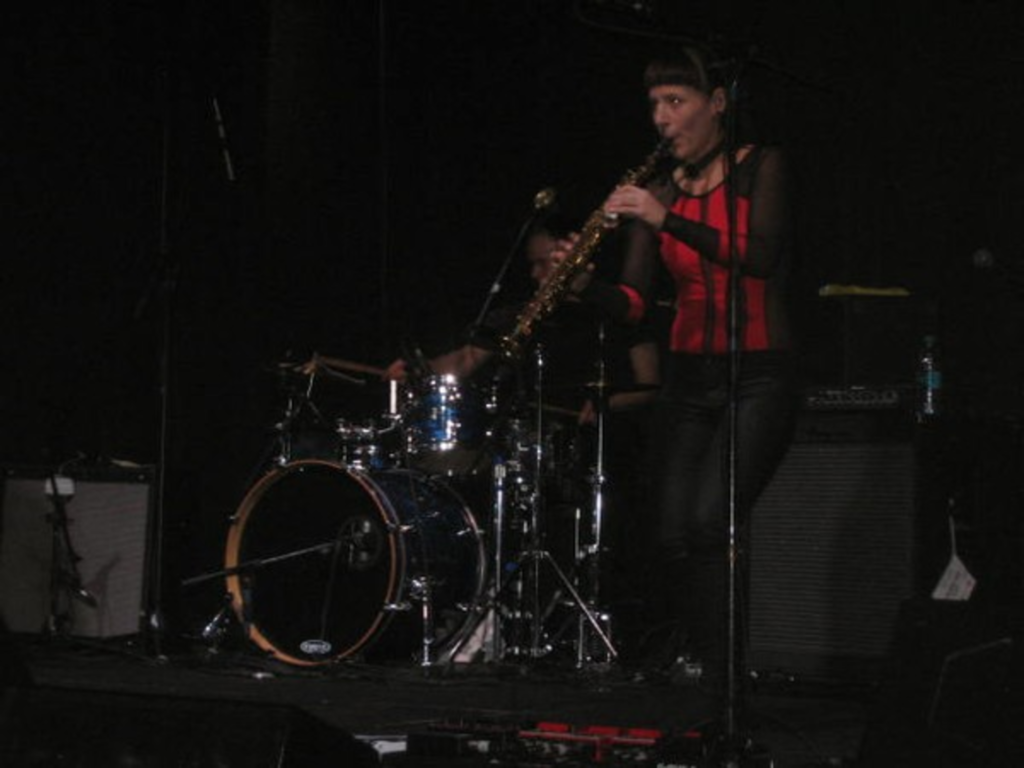 The Century Ballroom stage closed out with Trad.Attack!, an Estonian band that appeared everywhere during the week – hallways, hotel rooms – before landing on the huge stage they deserved. The band uses traditional Estonian folks songs as a base, and even provided a help sheet, letting the audience know, for instance, that the lyric from the song “Kooreke (Precious Cream),” “Leiva peale litsa-latsa” translates to “Onto the bread, split-splat.” To those roots, the band added loops, Estonian pipes, Jews harp, and soprano sax for a huge sound – and a giant sense of humor. After one crowd pleaser, their drummer grinned and said, “As we say in Estonia, thank you very many.” 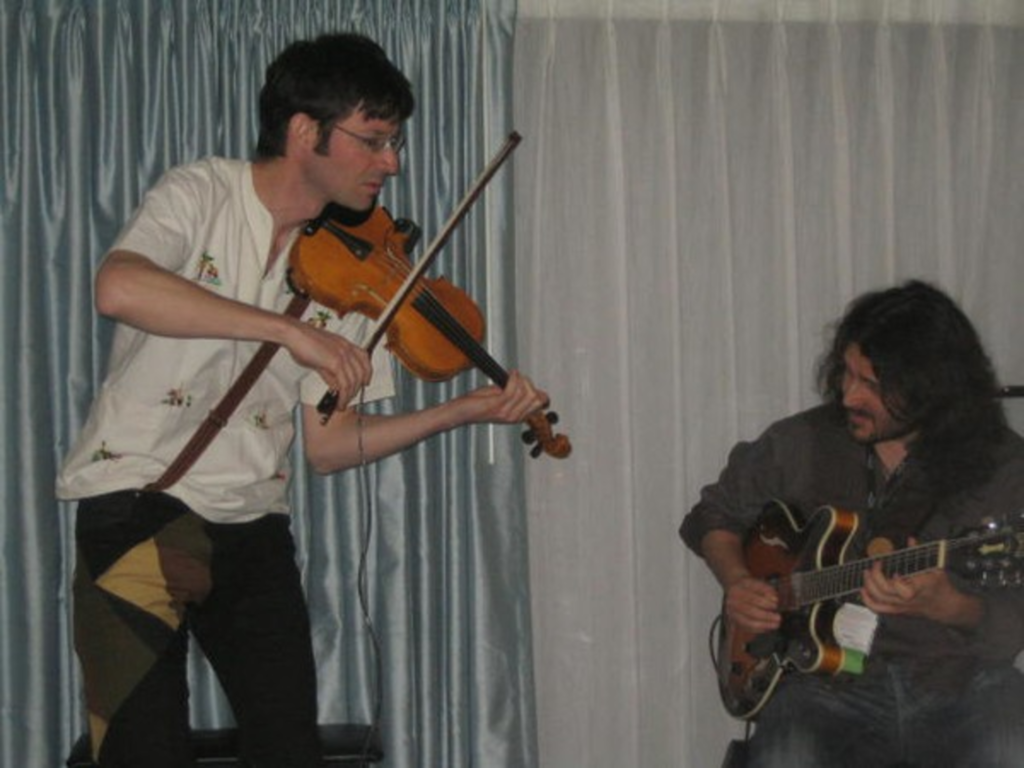 Upstairs, for the late-night showcases in the hotel rooms, I found myself in the Oklahoma Room. This was a great place to gather strength for the last push to shore, with Desi and Cody’s deceptively joyful duets filling the place with lyrics that burn about an hour later.

Then it was off to the Spotlight Quebec, for MAZ, a fusion of French-Canadian traditions and funky jazz. (Their keyboardist was pretty certainly using only the “folk” settings on his Moog.) Les Poules a Coulin, a collection of amazingly young second-generation Quebecois folk musicians, nearly blew up their stomp board. (Note to future KC summer festival organizers: We desperately need a Kansas City-Canada exchange weekend. Winnipeg? Edmonton? You in?)

On the way out the door in the wee hours, Kansas City’s own Victor and Penny dashed by, breathless and smiling, rushing to the back stairs, on their way to one last showcase. That’s the conference in a nutshell – always one more show, never too much folk.