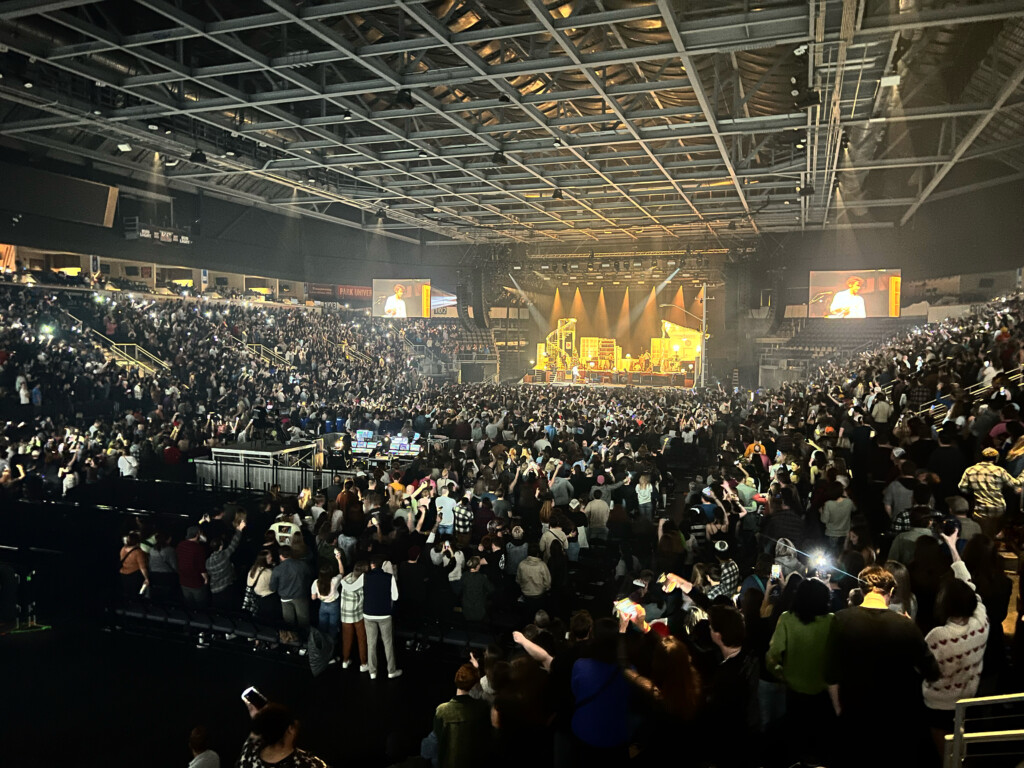 “The 1975 At Their Very Best” tour graced Kansas City last Thursday in the rock group’s first visit since 2019. The world tour follows the release of the group’s fifth album Being Funny In A Foreign Language, with dates spanning through 2023.

KC-based BLACKSTARKIDS lit up the stage as the opening act at their homecoming show. The trio joined The 1975 on their national tour as they have made massive career strides, establishing themselves among the ranks of one of the world’s most celebrated rock groups. Signed to Dirty Hit Records in 2020, they have continued to build their dynamic discography with a blend of hip-hop and indie rock sounds.

After playing Madison Square Garden in November, their performance at Cable Dahmer Arena was an exciting full circle for the moment. Group member TyFaizon tweeted following their performance about his graduation at the same venue in 2019, not realizing what was going to come in the following years.

2019 i graduated from cable dahmer arena and had no idea where my life was gonna be after, 2022 i performed there last night w my friends pic.twitter.com/E7RBmunVyl

The cyber-pop performance woke up the crowd, featuring hits  “FRANKIE MUNIZ,” and “HOW TO SELF DESTRUCT*,” their unharnessed energy and cartoon-like stage presence made for a crowd-pleasing performance

The 1975’s act opened with Christmas lights that illuminated a stage set to look like a house as the band slowly trickled onto the stage. The theatrical production that ensued followed frontman Matty Healy as the songs told an emotional story of heartache, love, happiness, anger, and existentialism.

Beginning seated at a piano in the ‘living room’ the show opened with the arpeggiation from the latest “The 1975” intro track featured on Being Funny In A Foreign Language. Healy performed the majority of the set smoking a cigarette and with a nonchalance that only a rockstar could embody. The first third of the show was driven by their most recent album release, intermittently featuring performances of earlier hits throughout the show.

Following the intro, the show immediately jumped into lively hits “Looking For (Somebody To Love)” and “Happiness”. The 1975’s music is far too danceable for the seated floor, but somehow the intimate setting made it work and people made it their prerogative to dance despite the unconventional arrangements. The saxophone interludes by John Waugh were absolutely heart melting, and the minute or so feature in “Happiness” stole the heart of the whole crowd.

The show was balanced with melancholy releases from their latest album. “All I Need To Hear” was sufficiently devastating, and the audience was well-equipped to sing along with Carly Holt’s bridge in “About You”.

Healy took it to the roof for a spotlit solo rendition of Tumblr classic “Fallingforyou,” where the audience was able to relish in the cry of ever-reblogged lyrics “I don’t want to be your friend, I want to kiss your neck”.

Ouch—not an easy night for single people in the audience.

Healy performed an acoustic version of “I Like America & America Likes Me,” in an introduction to the more politically informed section of the show. The song is a call to the modern horrors of consumerism, mass shootings, and fame. Screaming “Would you please listen,” was the guttural release of emotions I didn’t know I needed. Thanks for the group therapy.

The show was split into two acts broken up by an interlude of music where Healy went on a political rant that was… not quite discernable. “Being a poster boy for the Left for a decade is fucking tiring,” says Healy.

His mildly inebriated state was apparent as he continued to talk about the “ideal liberal masculinity,” a point that did not quite reach a comprehensive conclusion. To be fair, I’m not sure Healy even understood what he was talking about. Alas, global politics are too much to bear for us all.

The 1975 At Their Very Best
Missouri

Following the intermission, the band reentered the stage dressed in suits to hash out some of their earlier hits. Unlike the theatrics of the beginning of the concert, the band chose to evolve into the more traditional settings of their concerts, with simple settings and light displays that weren’t as provocative as earlier stagings. “If You’re Too Shy (Let Me Know)” kicked off this part of the show, making way for more lighthearted dancing before being met with the heavier content once more.

The crowd screamed alongside “Love It If We Made It,” a song with sustained relevancy that Healy expressed disdain towards. Rather than changing for the better, the world has continued to experience social, political, and environmental issues that make this song all the better to scream.

The show’s final round of songs gave a pleasant taste of nostalgia—and The 1975 certainly knows how to tap into it. Watching the band perform “Robbers” and “Sex” never fails to evoke the same feelings of being a thorny, rebellious teen—a feeling that I’m sure I wasn’t alone in.

The evening closed with “Give Yourself A Try,” concluding the concert with the perfect amount of optimism. The only complaint I heard as I was leaving the venue was about the absence of their debut single, “Chocolate” in their setlist—as we learned from the show, there are worse things to be upset about.

Even with the hard-hitting politics of the world and narrow escapes from spiraling down a rabbit hole of doom, The 1975 always know how to put on a show that leaves the audience feeling better than before.

Looking For Somebody (To Love)

Part Of The Band

I’m In Love With You

All I Need To Hear

When We Are Together

If You’re Too Shy (Let Me Know)

It’s Not Living (If It’s Not With You)

Love It If We Made It

Give Yourself A Try

HOW TO SELF DESTRUCT*