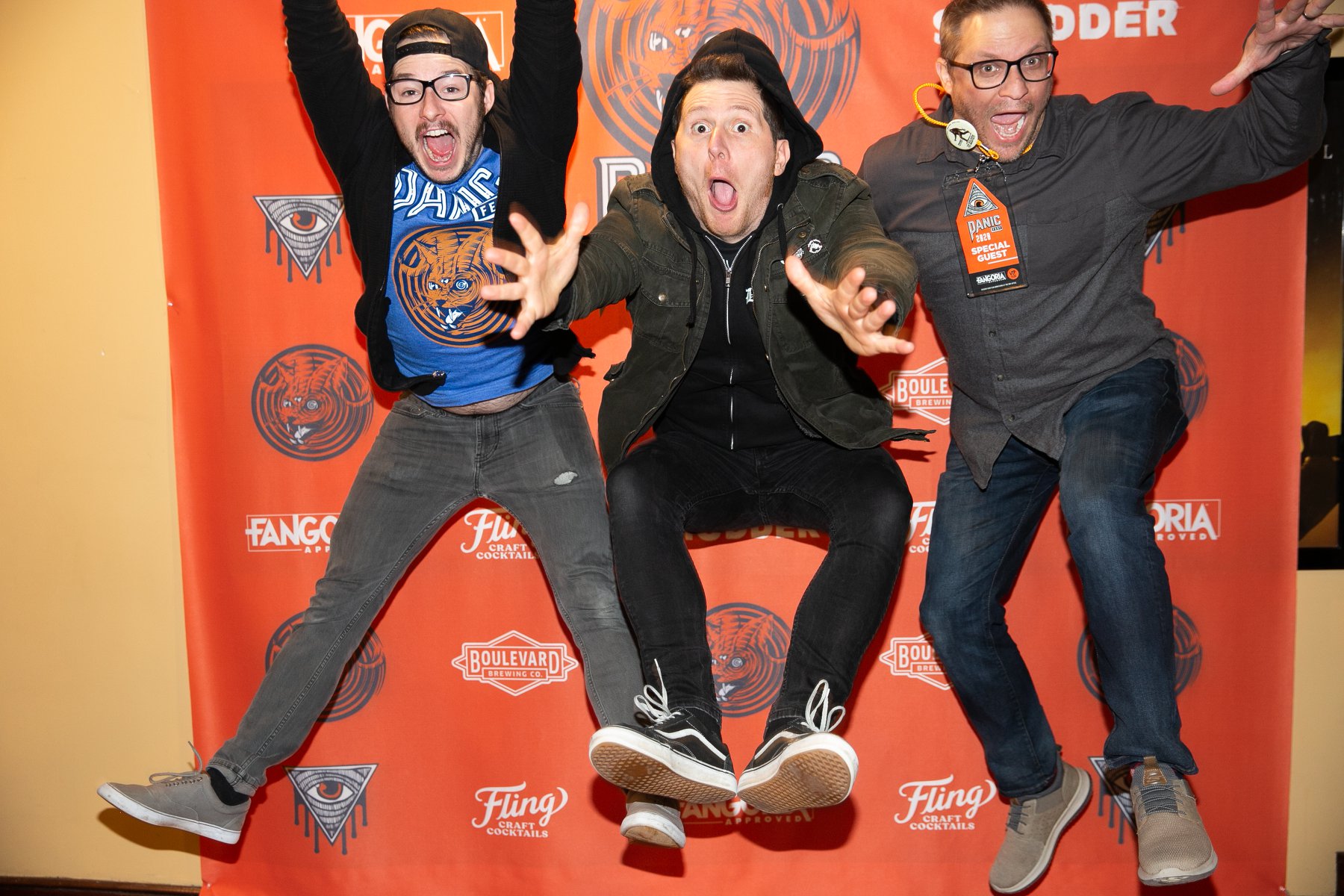 January is a special time for film lovers.

Best of lists start spilling out of the woodwork. The big entertainment awards shows are out in full force. Up in the mountains of Utah, the star-studded gala that is Sundance unfolds. Yet, smack dab in the heart of the midway, the region’s biggest genre film festival also unfolds. One which has steadily been growing over 8 years, to the point where it can no longer be ignored. A feat that happens when you end up on Moviemaker Magazine’s “Bloody Best Genre Fests In The World.”

Since its inception, Panic Fest has called the local historical haunt Screenland Armour its home. The last week of January is a dizzying flurry of movies, podcasts, vendors and madness. Last year they expanded from two screens to four and the impact of the overall festival is palpable.

“This year’s festival is our biggest year in terms of both programming and guests in attendance,” shared co-founder of Panic Fest Adam Roberts, “This isn’t a festival just for filmmakers or film lovers it’s a melding of the two to create a singular film family.”

That idea is woven into the fiber of the event, with attendees mingling with special guests, talking about what they had seen or were looking forward to.

“I really like how intimate it is. It’s a smallish space, but everyone is there, in one place,” stated guest lecturer Elric Kane, “like some festivals will have events happening on the other side of town, so you don’t ever see anyone. This one has been packed theaters, each time.” 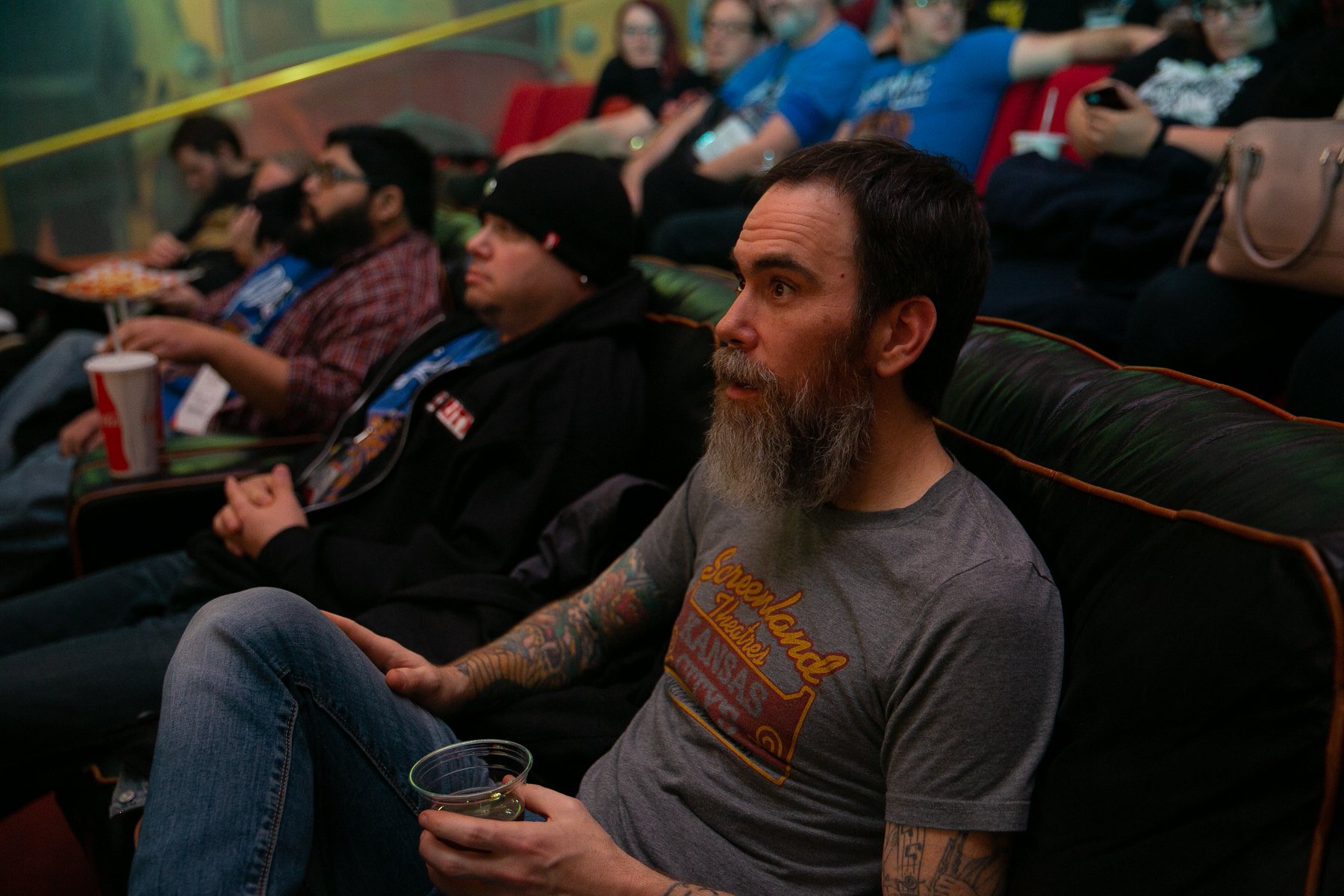 Panic Fest is packed to the gills with way too many good films for a small Midwestern weekend. To cover them all would be a daunting, exhausting and kind of a boring affair. So instead, here are a few highlights that you should keep your eyes out for, when they finally land in a theater or video-on-demand in the coming year.

From Canada, Blood Quantum is a zombie film with numerous twists, the most intriguing of which is that the lead characters are all Native American. Combining copious amounts of blood, creativity, social commentary and one ferocious grandfather, it unfolds like a season of The Walking Dead; just condensed to 90 minutes, with all the excess trimmed. On the other side of the zombie pond was Eat, Brains, Love: A YA novel adaptation, that sees director Rodman Flender returning to a similar world he explored in Idle Hands. It’s a light but utterly entertaining road trip film, with a biting sense of humor.

“I’m so indebted to festivals like Panic Fest that are keeping the magic of seeing a movie in a theater alive, especially for those of us who are making horror movies,” said Flender.

One of the overriding themes of this year appeared to be an emphasis on the notoriously difficult pairing of horror-comedies. The strangest feature to fit that mold, Lisa Ovies’ Puppet Killer, also ended up being one of the biggest surprises of the fest.

“I always get nervous that no one is going to laugh and get the jokes,” said an ecstatic Ovies, “One minute and 30 seconds in people were laughing and I was like ‘oh, YOU are my people. You get my weird movie! Thank you so much.’ So it was great!”

Ovies had nothing to worry about, as her weird and funny love letter to 80’s horror was met with thunderous applause. 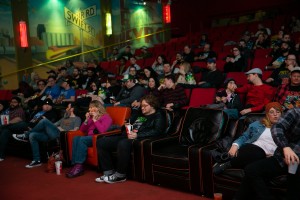 Movies are but just one element of what makes Panic Fest so great. The scheduling allows for enough breaks between films to make friends blow up their scheduling plans via your recommendations. Equally important now to the proceedings are the live podcasts. As that particular landscape keeps expanding, the overlap between people who like discussing movies, watching movies, and talking about movies, grows more encompassing.

In conjunction with getting an official “Fangoria Approved” branding, this year’s festivities had a couple of big-name additions in the form of Shock Waves and Nightmare University. Dr. Rebekah McKendry pulled double-duty as host of both shows and brought co-host Kane along for the ride.

“This has been absolutely phenomenal. Everyone has been absolutely wonderful…this is a really tight festival,” McKendry said, in between hotly contested pinball matches with Kane. The Nightmare University podcast was a masterclass in inspiring burgeoning filmmakers, at a festival all about empowering that same talent. McKendry went in-depth on how to attempt micro-budget horror. Both on how to manage expectations, while being bold and creative. It was a perfect match in a year where the much-beloved short film showcase was so large, it had to be split into three different 90-minute blocks.

The biggest returning guests were Adam Green and Joe Lynch, who previously attended in 2018. While they didn’t bring any new releases, they were more involved than anyone could have anticipated.

“What makes panic fest so special to me, as both a filmmaker and a film fan is being able to share the communal cinematic experience in a way that doesn’t feel corporatized,” Lynch expressed, “There are so many film festivals out there, both nationally and internationally, that feel so overprogrammed. More like an opening weekend of a movie, rather than a celebration of cinema.“

In addition to hosting a 10 year anniversary screen of Green’s Frozen, they followed up with a very special live recording of The Movie Crypt. Though his co-host had to leave early, Lynch held court on his own on Sunday. He presented the NC-17 cut of Richard Stanley’s Hardware, which paired perfectly with Stanley’s recently released Nic Cage nightmare Color Out Of Space. He then sat down with local podcasters from Nightmare Junkhead for a rousing and raucous discussion on 1990’s horror.

Ask anyone though what the true highlight of the week was and they’d all utter the same two words: Paddy Murphy. The Irish director came alongside the US premiere of his film The Perished. Every time you turned around he was holding court with another group of film lovers, eager to make new friends. By the morning of Day 3 he had become both the festival’s ambassador and unofficial mascot.

“Panic Fest has been one of my favorite festivals I have ever been to. Everybody has been incredibly warm and welcoming, incredibly inviting,” Murphy expressed with a giant grin on his face. Yet it was true. There was an energy in the hallways and the freezing cold outside of Panic Fest, of lifelong friendships being forged. All in the name of a collective love of cinema. 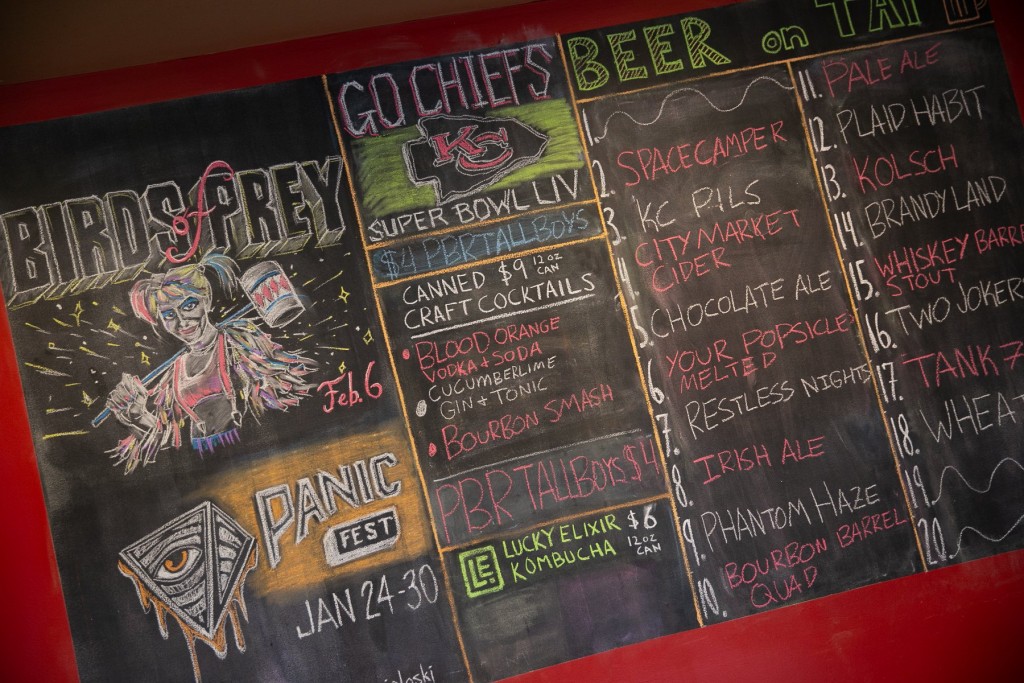 Murphy’s infectious charm spread even to those assigned to introduce his movie.

“I felt like a proud dad. Because I’ve known Paddy for years,” said Lynch, who first met Murphy through The Movie Crypt message boards when he was initially looking for words of encouragement on his filmmaking journey. “How can you not have a wonderful sense of pride and gratitude that he took our stupid advice?”

Even Murphy himself was a little taken aback by the audience’s reception.

“The thing that blew my mind was that I feel that this movie is a certain thing, it is very upsetting because in Ireland it is [an upsetting topic],” he stated, getting a bit emotional, “but what I saw here was a different vibe. That people saw it as a more empowering film than I maybe thought it was and that was an incredible feeling for me.”

Without a doubt, the 2020 edition of Panic Fest is likely to go down as the best one yet.

The combination of movies, podcasts, guests and events– it’s difficult to sum up in a small handful of words.

“Maybe next year at one of the live events we can summon a demon. That might be the only thing that can top this year’s fest,”co-creator Tim Canton declared.

As silly as that may seem, it would be a sentiment shared by most who came out this year. Make sure that you get in on Panic Fest 2021, before this collection of off-kilter movies and off-kilter movie lovers outgrows its current quaint charm.

Adrian Torres is a film critic and generally fantastic person living in Kansas City. You can follow him on Twitter and read his other work over at Boom Howdy, where he serves as EIC.