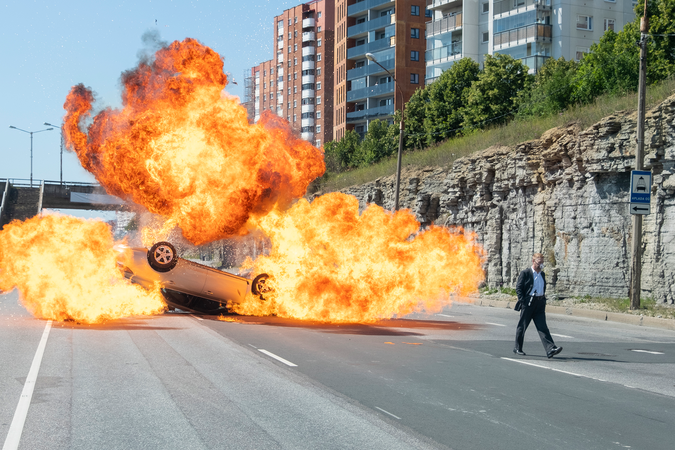 It’s occasionally easier to admire writer-director Christopher Nolan’s movies than it is to enjoy them.

With Interstellar, Inception, Memento, and The Prestige, Nolan pulls off some narrative sleight of hand that’s often hard to appreciate on an initial viewing.

With The Prestige, for example, the film’s final reveal has more impact after the movie is long over because the primary feud between two amoral magicians (Hugh Jackman and Christian Bale) trying to one-up each other is not that involving. That said, Nolan more ably figured out how to fit Nikola Tesla (David Bowie) into his fictional story than the makers of The Current War did with the real-life battle of wills over the technology he developed.

Because Nolan’s movies like Memento, Dunkirk, and Interstellar toy with chronology, it’s a given that he’d eventually make a film involving time travel.

Movies involving the ability to move back and forth between the past and future can be problematic because going back to a crisis point can seem less than involving if the viewer can practically spot an “Undo” key on the upper right-hand side of the screen. Dangerous situations don’t seem all that dire if you can correct them afterward.

To counteract that issue, Nolan sets the distances his characters can travel narrowly. With shorter windows of opportunity, the ability to fix mistakes before they happen doesn’t seem quite as fantastic. It also helps Nolan approaches action scenes in a matter-of-fact manner. It’s easier to believe that the impossible is possible if it looks a little mundane. Unlike Michael Bay, Nolan knows the 101s of composition, pacing, and editing, so his action sequences have a tension and grit that most blockbuster movies don’t have.

When Nolan stages vehicle chases, he uses large screen formats like IMAX so well, he makes viewers feel like they’re in the fighters in Dunkirk or on the Batpod in The Dark Knight. He also has a gift for optical and digital trickery that doesn’t give itself away. His movies don’t have that “effects by PlayStation” look that plague Roland Emmerich’s films like Midway.

Conversely, Nolan can negate his striking visuals and his own clever setups by taking some odd risks that don’t pay off. By actually naming his main character “The Protagonist,” the director seems to be daring his viewers to stick with him in a manner that’s borderline hostile. You wait for him to be addressed by name only to find out he doesn’t really have one.

This CIA agent (John David Washington) does have one legitimate reason for being anonymous. As far as hostile intelligence agencies are concerned, he’s dead.

His “demise” was part of a loyalty test he passed so well that his supervisors are sending him to stop a potential world war. Mere nukes don’t need agents as tested as he is. Now that moving ahead or behind the clock is an option, The Protagonist winds up traveling across the globe with a fellow operative named Neil (Robert Pattinson). The latter fellow knows obscure loopholes in the laws of physics and has a knack for wisecracks.

That said, Neil often seems as untrustworthy as he is crafty. After the two chase down a series of arms dealers who’ve figured out how to make it so that pistols can both expel and catch bullets, they learn that Russian gunrunner Andrei Sator (Kenneth Branagh) may be so set on mastering the new technology that he might not care if he takes the rest of the world out with him in his quest.

To get to Sator, The Protagonist tries to get an introduction through Sator’s wife Kat (Elizabeth Debicki). While she does have contact with her husband, the two are in a vicious custody fight. That can seem to be an obstacle, but the fate of literally everything is at stake.

Nolan handles the 2 ½-hour running time well, but as with Interstellar saving the world should be a tad more thrilling. The director’s penchant for muddy sound mixes does him no favors here. You can see actors leaning into each other as if they were about to deliver vital information, but making out the words is a struggle. In Dunkirk, the muffled sound worked for conversations aboard a spitfire (1940s radios probably had lousy noise reduction).

To keep indifference from setting in, Nolan manages to get the most out of his cast. Washington used to play pro football, so it’s easy to believe that he can punch out larger antagonists. It’s also rewarding to see Pattinson, who gained his initial fame from playing the whiniest dullard of a vampire in screen history in Twilight, has with and charm when the material gives him something to do.

Branagh is suitably intimidating and cranky, and Debicki projects a quiet sense of strength that prevents viewers from pitying her for getting the wrong spouse.

Some of my peers have complained that Nolan tries too hard to show how far he can push narratives, explosions, or chases. In his defense, there is something refreshing about having a filmmaker who makes blockbusters that don’t spoon-feed the story and who refuses to believe there are no more worlds to conquer.

SXSW: Power corrupts in The Spine of Night

SXSW: The Fallout takes a nuanced look at an unfortunately evergreen subject