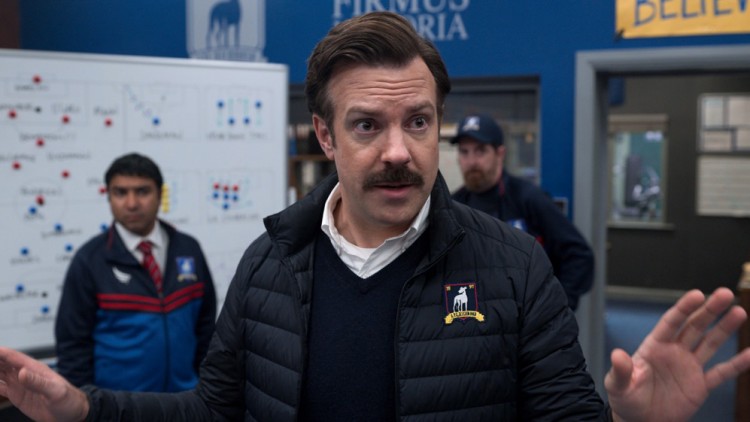 The AppleTV+ comedy Ted Lasso is up for major awards in this year’s Emmys, in a move that should not surprise anyone. 20 Emmy nominations total, to be exact. This breaks the record for most-nominated freshman comedy series—previously held by Glee, which was nominated 19 times. The show, about an American football coach from Merriam hired as the football (soccer) coach of AFC Richmond, captured the hearts of Kansas City and the world.

Kansas City’s own Jason Sudeikis, who’s from Overland Park, is nominated for Lead Actor in a Comedy Series. His co-stars Hannah Waddingham and Juno Temple, who respectively play Rebecca and Keeley Jones on the show, are both nominated for Outstanding Supporting Actress in a Comedy Series. Rounding up the acting side of the nominations are Brett Goldstein (Roy Kent), Jeremy Swift (Higgins), Nick Mohammed (Nathan), and co-creator Brendan Hunt (Coach Beard).

Ted Lasso is nominated for Outstanding Comedy Series. It’s up against Black-ish, Cobra Kaiii, Emily in Paris, Hacks, Pen15, The Flight Attendant, and The Kominsky Method.

Congratulations to the #TedLasso team on their #Emmy nomination for Outstanding Comedy Series. Watch now on the Apple TV app with an Apple TV+ subscription. https://t.co/nohhBLci3i pic.twitter.com/IWVsPjgTmP

Grab some barbecue from one of the KC greats, or JoeArthur GateStack merch to celebrate these nominations and hopeful wins, which feel like nominations for Kansas City as well as Ted Lasso. Don’t forget to tune into the second season of Ted Lasso, which is set to premiere July 23.