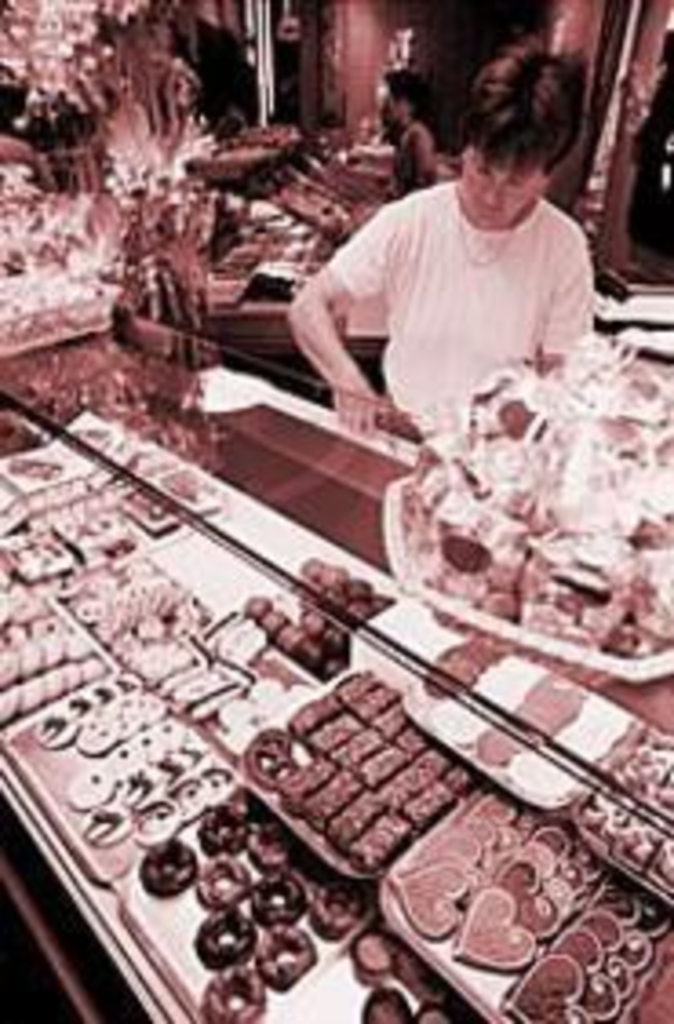 As much as I hate to admit that I’m ever wrong, I’ll gladly eat humble pie when it’s the alternative to eating something less appetizing. After all, as Confucius said: “Admit that you do not know what you do not know, for that is knowledge.” And for years — 16 to be exact — I avoided Andre’s Confiserie Suisse because I assumed it was a stuffy, uptight “Ladies Who Lunch” spot. It was a perception grounded in my own prejudices, since my knowledge of the popular European-style pastry shop and tea room was practically nonexistent, even though it was just around the corner from the Plaza apartment I’d rented for more than a decade. Sure, I had dashed in from time to time to buy a box of chocolates or a birthday cake, but I’d never given a passing look to the dining room at the back of the building.

When I finally took my place in the fast-moving lunch line last month, I wondered what had been keeping me away. After all, I love the elaborate Swiss pastries and candies that owner Marcel Bollier and his family create and sell in big, shiny glass cases in the retail area in the front of the building.

As I waited for a table, I realized I was right behind an old lady with a walker, in front of a bickering middle-age couple, and barely a foot away from an imperious-looking 60-ish matron with the worst facelift I’d ever seen. I suddenly I remembered how my friend John had described the restaurant’s patrons: “The Bad Hair Capital of Kansas City,” he grimaced. “Crotchety old ladies with frizzy perms and hideous Johnson County housewives with ratty bleach jobs or maniacal frosted heads or shellacked with so much hairspray their heads look like the glazed pastries in the display cases. It’s like something out of that Joan Crawford movie, The Women.“

I’m happy to report that after several lunches at Andre’s (the restaurant stopped serving dinner nearly a decade ago so that Marcel and Connie could spend more time with their children), I saw that the clientele is far more varied and interesting than John’s caustic description. I saw plenty of men in suits (the restaurant is close to several midtown office towers) and a few under-30 diners mixed in with the Ladies Who Lunch crowd (some of them were in desperate need of a good hairdresser) who still dominate the dining room.

“Yes, there was the perception that this place was a little-old-ladies’ tea room that followed us for years and years,” says Marcel Bollier. “But the customer base has changed dramatically over the years. Now you see more of a mix of men and women, different age groups and backgrounds. The perception started, I think, because this restaurant is a tea room. That sounds ladylike.”

But in Europe, the words “tea room” don’t evoke images of pink-cheeked ladies poking trembling forks into Napoleons. In Copenhagen, for example, a tea shop can be a classier version of an American luncheonette; think Nichols Lunch serving open-face sandwiches and boiled cod with mustard sauce.

And Andre’s isn’t at all ladylike in decor, with its simple wooden walls, uncloaked tables with paper napkins, and a ceiling hung with flags representing the different Swiss states. The menu is equally no-frills: only four dishes, all priced the same (about $10.35), all including a beverage and dessert from the pastry tray.

Because the menu is so uncomplicated, it’s not written on paper but announced orally by the server (ours on one visit was actress Cynthia Hyer, a veteran employee, who brought a sense of drama to her description of a Swiss-style pizza in a pastry shell). Two of the daily offerings never change: a wedge of quiche Lorraine baked in traditional style with eggs, cream, cheese, and bacon, or a triangle of a meatless quiche. The other two items change daily, based on the tastes of Marcel’s mother, Elsbeth (the wife of the late Andre), who oversees the menu planning.

“My mother doesn’t like to be locked into schedules,” says Marcel, “but we do have a two-week listing of dishes we’ll be offering so our regular customers will know when we’ll have their favorite things.”

After a few lunches, I can understand why this place has a following. The British food writer Elizabeth David once described Swiss food as “rigorous and rustic,” and that’s the best description for this restaurant’s solidly built quiche (quivering and hot in a buttery crust), its fluffy omelet (cooked with fresh spinach and sliced mushrooms, oozing with cream and cheese), and its flaky croissant pastry wrapped around a slice of ham and melted Swiss.

On one visit, my friend Jacquie ordered the Friday seafood special — a casserole of baked codfish in a white wine sauce. She thought it might arrive bubbling in a little casserole dish, but at Andre’s the food is prepared as it would be in Switzerland, so Jacquie was surprised when her plate arrived with a perfect little codfish fillet blanketed with a wine and butter sauce. And in terms of a dish en casserole: It’s baked in a large casserole and spooned out for each individual plate, with a dollop of marinated beets as an accompaniment.

The portions are more European than Midwestern too. “Order an extra salad,” my friend Sally advised me on a different lunch visit, “or you’ll be disappointed.” I soon saw why. The green salad, dressed in a piquant housemade vinaigrette, was about the size of a good teacup (and two salads were still about half the size of a typical Kansas City green salad). But that’s fine, since these lunches, including a decent slice of pork loin roasted with a crusting of Dijon mustard and ladled with a sauce of robust red wine and the juices of the cooked meat, aren’t hearty platters of food. They’re just the right amount to lead up to the main event: dessert.

Dessert is what sets Andre’s apart from any other restaurant in town. The story of the tea room and the wildly successful candy and pastry operation connected to it is, in a hazelnut shell, about a pastry shop that almost didn’t make it. “When my parents opened the original pastry shop in 1955, the things they made were very, very different from what was being sold in American bakeries,” says Marcel. “They had a difficult time at first, so in 1957 they opened the tea room, with just a few tables at first, to bring people into the pastry shop.”

Now I suspect that it’s the exquisite pastries that lure diners to stand in line — often for as long as 20 minutes — for the tea room, since each lunch ends with the presentation of the tray, typically laden with a half dozen or so little works of confectionery art: a glossy little “Matterhorn” of whipped chocolate cream and cake; a cream-layered Napoleon iced with a ribbon of pale pink fondant; a fudgy nut brownie (“But we’re not allowed to call it a brownie — it makes Marcel cringe,” whispered the servers on two different occasions) topped with two puffs of whipped cream; a lemony citron tart; a crescent of pastry baked with firm slices of sweet apple.

The service is snappy and friendly, and Andre’s has a bustle and an energy to it, but compared with the high-voltage energy of a Houston’s or a Houlihan’s, Andre’s has an almost lazy, relaxed sensibility — a little bit of rigorous, rustic Switzerland just south of the Plaza.

And now that I’ve finally been there, I can’t wait to go back. Even on a bad hair day.