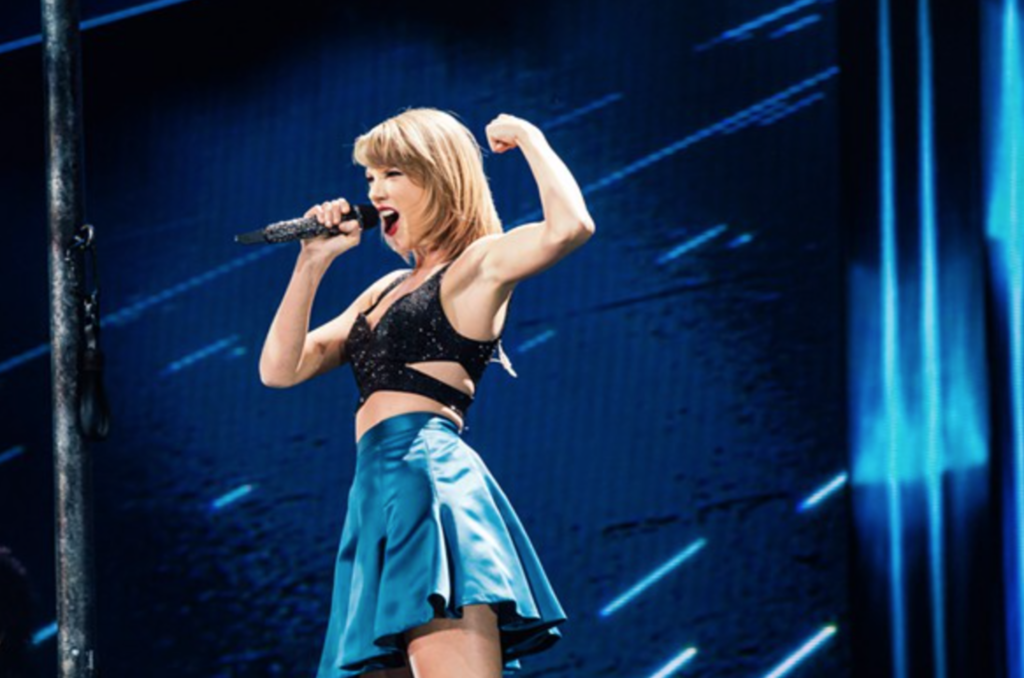 You’ve got to hand it to Taylor Swift: The 25-year-old superstar has crafted a personal brand so brilliant, so pervasive, that the sold-out Sprint Center crowd of 13,000 last night would have done just about anything she asked. It’s a good thing she only wanted us to scream louder. 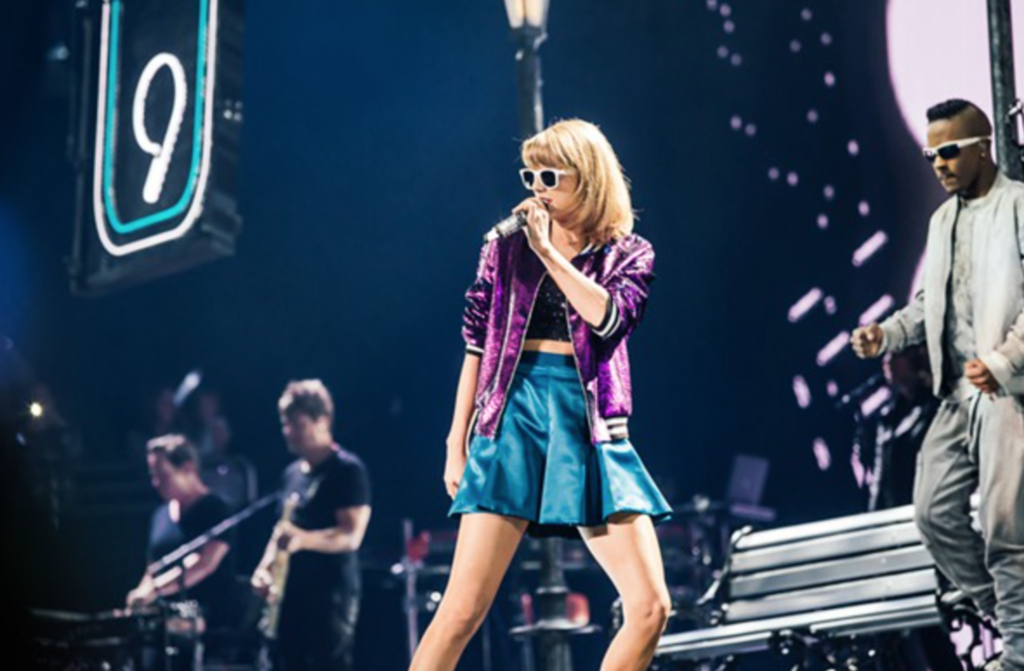 The “behind the scenes” videos playing before she took the stage told us that we were all part of a special movement, part of a broad and welcoming community called “Taylor Nation.” The audience members — plenty of whom were carrying light-up signs in odes to Swift and her latest mega-hit, 1989 — roared anytime she appeared on the screens. At 8:40 p.m., when she appeared onstage for opening song “Welcome to New York,” the enthusiasm was deafening.

In a teal bell skirt, glittery black bustier, purple jacket and white-framed sunglasses, Swift strutted across the stage, her army of a dozen-plus male dancers flanking her (throughout the night, their acrobatics would be far more impressive than hers). And I do mean strut: Swift’s stage setup included a massive catwalk that extended from the stage to the soundboard, and there were only a handful of numbers in her 17-track set that did not call for her to sashay up and down it with all the attitude of a woman who has been practicing that exact walk in her mirror since she was a toddler. Diva poses were struck. Fierce looks were given. Hearts were eaten out.

By “New Romantics,” Swift had ditched her sunglasses (midway through “Welcome to New York,” to the absolute delight of the fans who dived for them as she tossed them into the crowd) and the jacket. The video-screen backdrop continued the NYC theme with a scrolling cityscape — the storyline for tonight, Swift told us early, took place in New York, and the decor would reinforce that throughout the show. 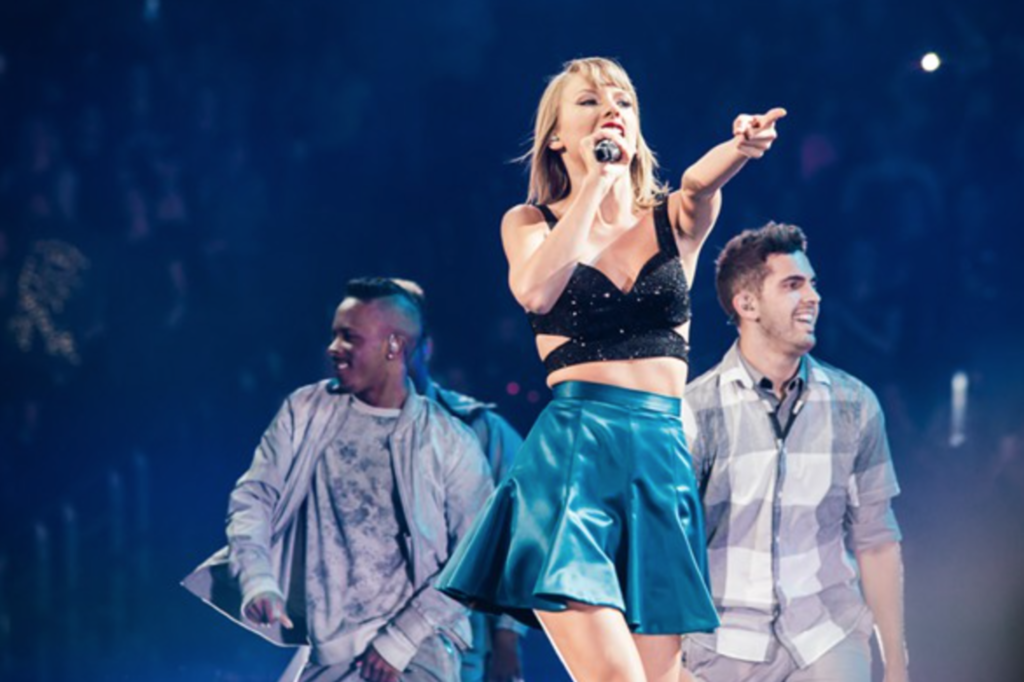 Another point she wanted to make: “There’s probably one thing you should know about me before we begin this evening,” she said, “I was born in 1989.”

As if any of us are ever in danger of forgetting that piece of trivia. I realized soon that what Swift really meant by this statement was that every song she would perform from 1989 would be reproduced note-for-note with little rearranging. This was not a disappointment, exactly — but Swift’s voice, though crystal clear, was often hard to distinguish from the backing vocals provided by three singers (who, along with her band, remained largely unseen for the majority of the night).

There were several costume changes throughout the show, and the first came for “Blank Space,” as Swift reappeared in a glittery black jacket and shorts. I watched the two tiny little girls next to me (ages 5 and 7, they told me) watch Swift, belting every single lyric. It was kind of adorable — which made the next number, “Knew You Were Trouble,” a little awkward.

Jacket gone again to reveal that same bustier, Swift sat down in the middle of the catwalk, her back pressed against a pole with attached straps (someone’s read Fifty Shades of Grey), with five of her dancers — shirtless this time (and for the only time). They did the same to their own poles, which led to a bit of choreography that was decidedly PG-13. While Swift sang about falling for the bad boy, these sculpted humans flexed and gyrated up and down her catwalk for a sequence that seemed designed specifically for all the adult female chaperones in the audience.

Afterward, as her Chippendales boys disappeared and a new set of dancers set up on the stage, Swift told the audience that she might “have a surprise” for us later, as long as gradually amped up the energy throughout the night. She gave us that confident, knowing smile as she launched into “I Wish You Would,” then disappeared again for a slightly longer costume change. 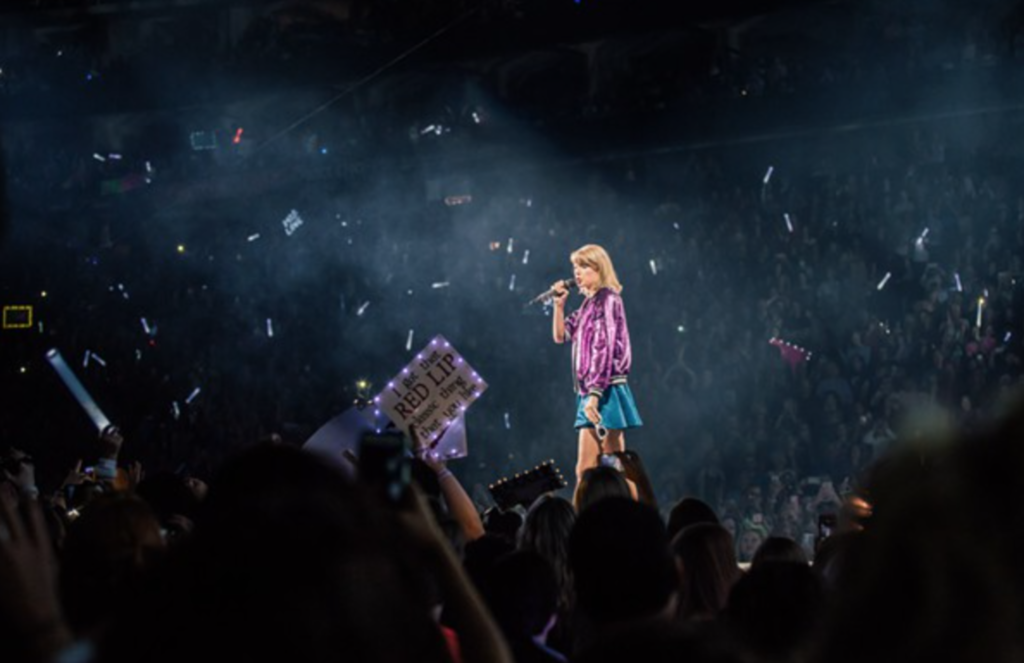 This was the first of three breaks that introduced videos of Swift’s infamous “squad” — you know, her high-profile glamazon girlfriends — giving endorsements for what a wonderful friend/person/artist she is. Lena Dunham, Cara Delevingne, Lily Aldridge, Selena Gomez, Abigail Anderson, the members of Haim — all dressed in black, sitting on barstools in front of a white screen, were only too happy to speak glowingly of Swift. Squad members described “a typical Taylor hang-out” (it purportedly involves piles of junk food and Chinese take-out) and the importance of strong girl friendships. Dunham informed us that Swift was the “patron saint of cats.” Este Haim told us she was “the sister I never had.”

This bit of propaganda was ingenious — the crowd shrieked every time Delevingne’s stunning face blessed the screen — but it also felt disingenuous. The goal of these videos — and, indeed, the entire concert — seemed to be to make us feel like we, too, were part of Swift’s magnanimous squad, but most of the would-be moments felt too scripted, too purposeful. For the first half of the show, Swift — who, with her long, golden legs and apparent inability to sweat (seriously), glowed like some kind of youthful deity — seemed just a touch impersonal, despite her repeated declarations of love for the crowd. 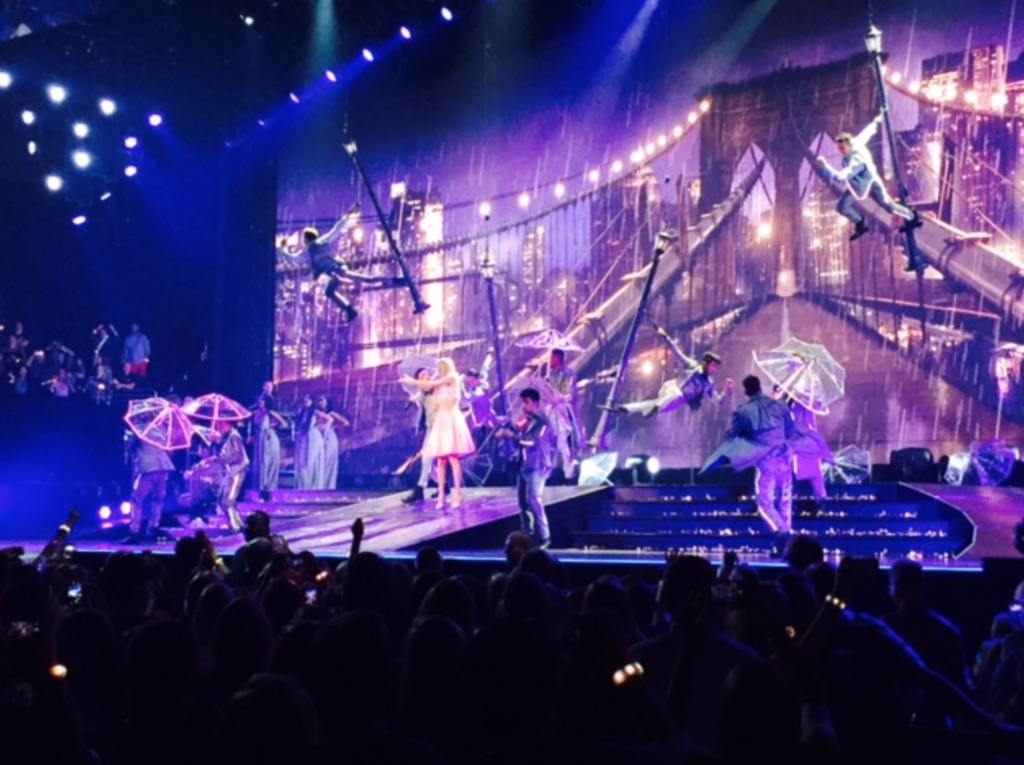 No doubts that couldn’t be quashed by an energetic rendition of “How You Get the Girl,” which found Swift shimmying around in a pink-LED skirt and crop top. (It matched the blinking LED bracelets each audience member was gifted; they pulsed different colors throughout the show.) Another costume change, and she reappeared in a white crop-top-and-short set, complete with thigh-high black boots, for “I Know Places.” For an acoustic version of “You Belong With Me,” the catwalk rose several yards into the air, delivering Swift at eye-level with the middle section of the Sprint Center. It was from this vantage that she delivered her first true monologue of the night.

“Here’s the thing about heartbreak,” Swift told us, in a vaguely preachy tone that suggested she’d delivered versions of this speech many times. “I’ve overthought the whole concept, and the worst part of heartbreak is when you let someone into your life you do these wonderful things. You let down your walls, and you’re brave enough to be vulnerable, and then you loose that person, and you start to regret doing all those wonderful things that you did to let someone into your life. Like, ‘God, I was so foolish, I let my guard down too quickly. I should have been hard to reach, and I let this person in.’” 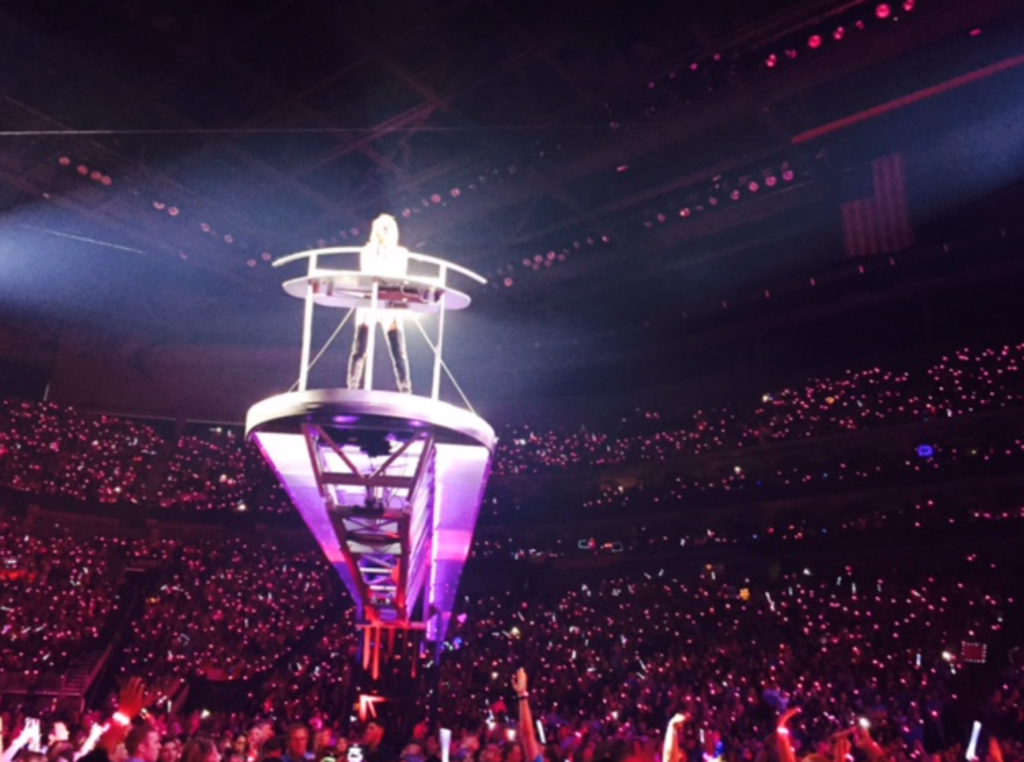 This segued into “Clean,” followed by “Love Story,” which Swift accompanied on keyboard as the platform rotated around the Sprint Center. Another wardrobe change, another set of squad videos, and Swift was back in a silver beaded flapper-style dress for “Style” — and then, at last, it was time for the special guest. I had been hoping for Ryan Adams (his 1989 cover album did come out just the day before; it would have been apropos, if improbable), but Swift — saying that she was “proud of the fact that I started out in country music” — introduced country star Dierks Bentley for a duet of his hit song “Every Mile Is a Memory.”

Swift’s audience was not exactly a country crowd, but Bentley received a warm welcome all the same. Afterward, the two hugged it out, and Swift again disappeared before “Bad Blood,” which called for a dominatrix-like black leather catsuit. She kept it on for “We Are Never Ever Getting Back Together,” which found her standing at a microphone, wielding an electric guitar and bathed in a dark red spotlight. This was the most vivid and loosely performed song of the night; Swift may still be harboring some resentment for Jake Gyllenhaal (or John Mayer? Whoever). 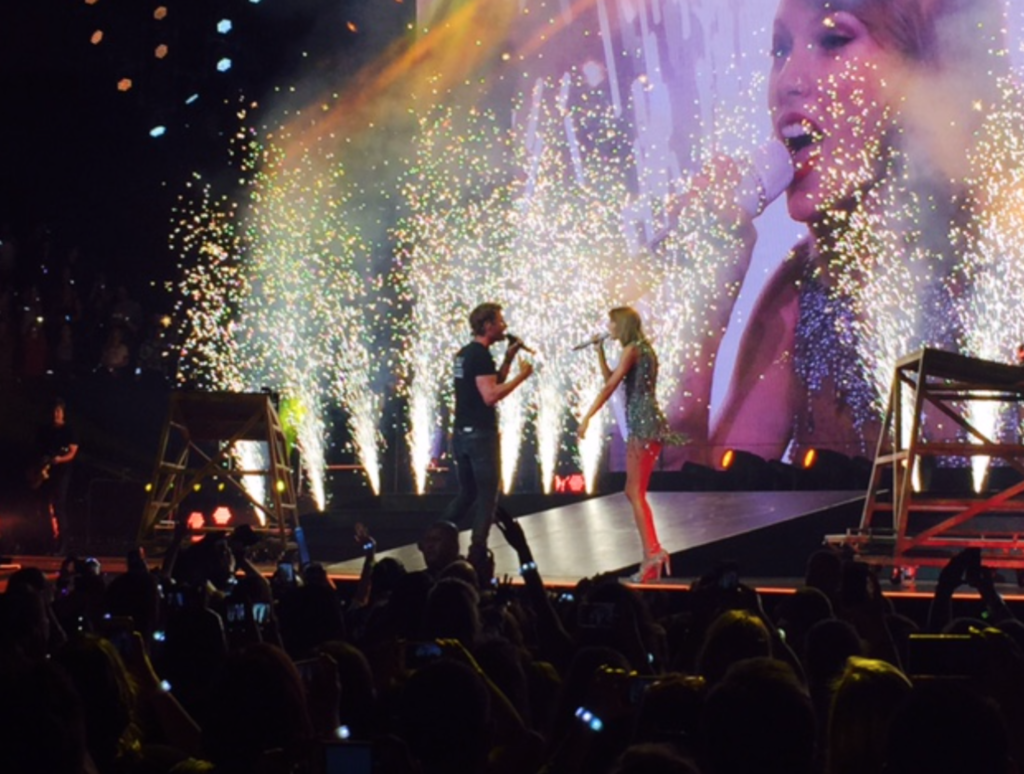 Another break, another squad vid — this time with her troop lamenting the media scrutiny Swift is unfairly subjected to — and she was back in a sparkling ball gown, seated at a piano, looking for all the world like a Disney princess as she delivered “Wildest Dreams.” She stood up and ripped off the tulle skirt for “Out of the Woods,” which concluded with a mass of paper-airplane-shaped confetti falling from the ceiling. One more costume change — and a video, this time, featuring just Swift and her cats, which was admittedly pretty cute — and Swift popped back up in a green fringed top and skirt for the grande finale, her iconic “Shake It Off.”

The catwalk rose up again, twirling around the arena with significant speed as Swift and her dancers reinforced her anthem. Then, nearly two hours after she first appeared onstage, she left her euphoria-ridden honorary squad members just as easily as she had welcomed them to her show. 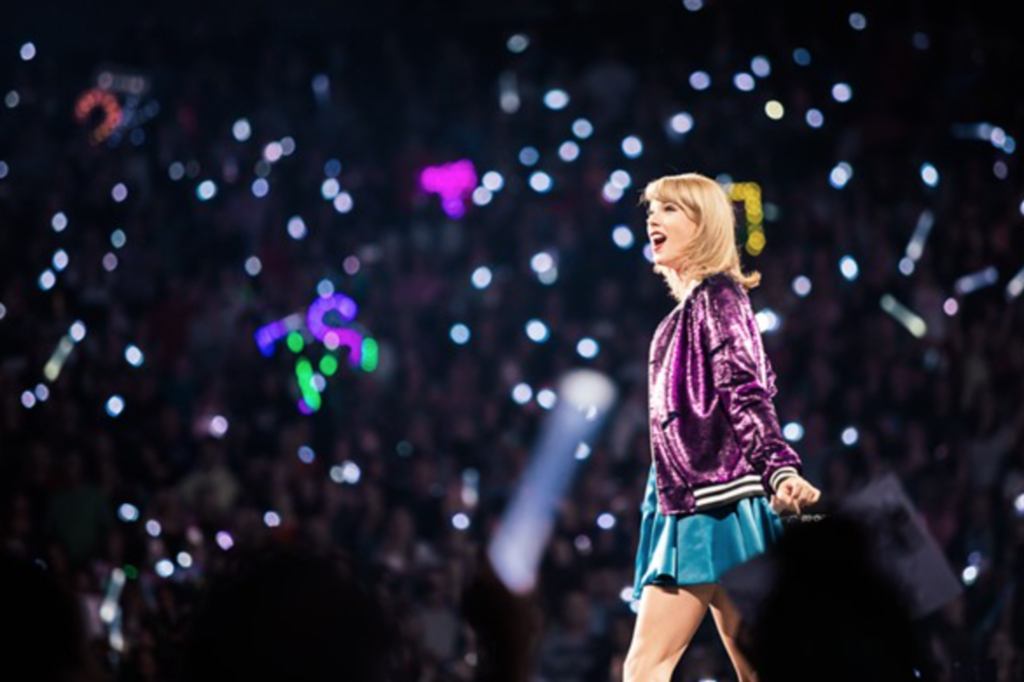 Leftovers: Look, I love Taylor Swift. I think 1989 is great; I’ve totally worn out all the songs, and I still keep playing them. And this show had everything a Swiftie could have wanted — glitz and moves and set changes, the works. Swift knows what she’s doing. And maybe that’s the part that really got under my skin: Realizing that her own marketing is so bone-deep that perhaps even Swift herself might not be able to turn it off. Her power was omnipresent and terrifying. Does this mean I’m one of the doomed cynics Swift referred to? Maybe. Ah, well.

Oh, yes, and: Opener Vance Joy did a good job of getting the crowd on his side, singing along to his hit “Riptide.” He’s back in town with a headlining show at the Midland in February.

Taylor Swift is at the Sprint Center for Night Two tonight. The show is sold-out, but secondary outlets have tickets available.