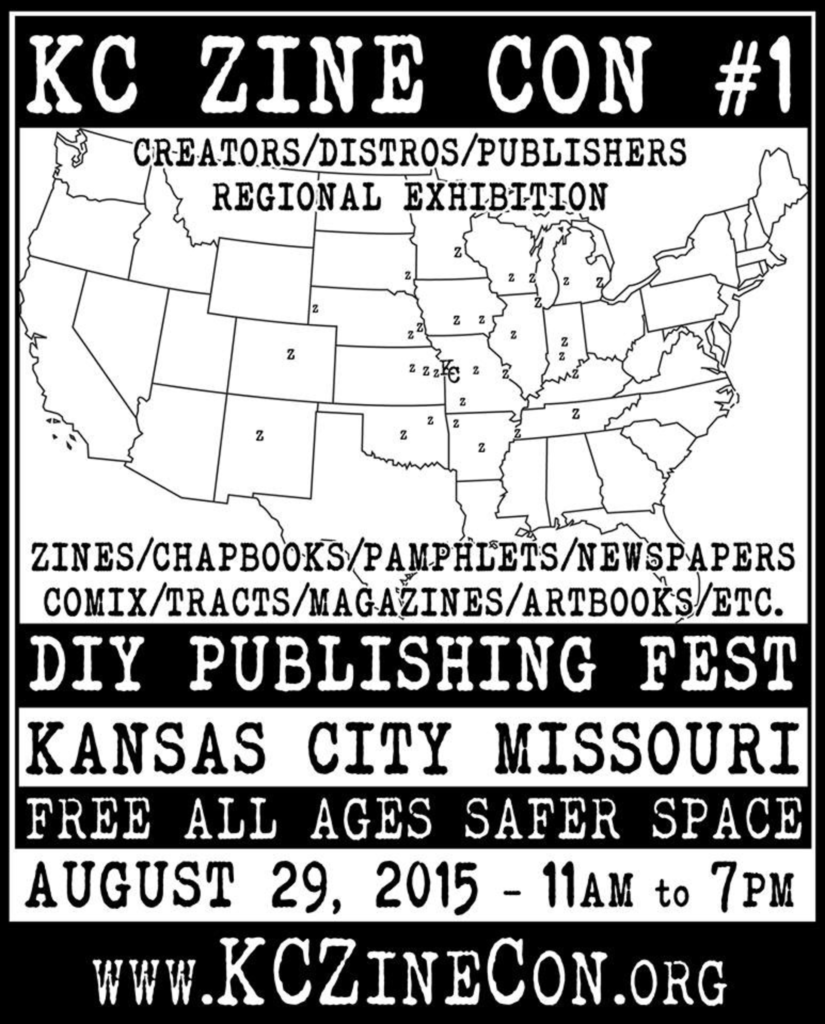 For a few years now, longtime local zine maker Marc Saviano and a few likeminded friends have been thinking about organizing some kind of KC-based zine event.

“Last year, I tabled events for Pioneers Press and experienced a lot of these types of events and figured we could pull it off,” Saviano tells The Pitch. “So about February I just woke up one day and decided to make it real and started rounding everybody up from our loosely based collective.”

The result is the first annual KC Zine Con, to be held in the Valentine Room at the Uptown Theater this Saturday, August 29th, from 11 a.m. to 7p.m. It features 80 artists from around the Midwest, workshops, lectures, on-site screenprinting, and, natch, zines upon zines. (There’s also a pre-show party at FOKL on Friday night. More here.)

“I hope to see new zine makers emerge and anonymous zines start showing up in coffee shops and record stores around town [as a result],” Saviano says. “I think the local scene is growing just as the larger scene is growing. More artists are taking on DIY pursuits such as zines and other street-art mediums that don’t require a middleman or gallery or distributor, etc.”

One of the speakers at KC Zine Con (full schedule here) is Frank Farmer, a professor of English at the University of Kansas who has devoted much of his recent academic studies to zine culture and its history. His presentation is titled “Why Zines (Still) Matter: Making Democracy From What’s Handy.” We dialed him up the other day to chat about it.

The title of your talk next Saturday is “Why Zines (Still) Matter.” Why do zines still matter?

I guess my thesis is that zines stand apart from mainstream discourses, and raise discussions about things the mainstream doesn’t ordinarily broach or address. And because zines perform that function — because they are often the first to put those issues out there — they are the first wave of changing the conversation. For years there have been zines on transgender issues, LGBT issues, animal-rights issues. And eventually they inch closer to the mainstream and are discussed, debated and sometimes change things. Zines draw attention to people on the margins who for whatever reason haven’t garnered the respect of mainstream culture.

But what about in the digital era? Can there be a zine online, or is that not a zine? Must it be a physical object?

I think that’s a really interesting question, certainly one that I’m interested in. I think the zine community has to decide that for itself. An individual author has to make that decision. On one hand, it seems like no big deal: you could make a paper zine, photocopy it, put it in a PDF or something, and make it available to view online somewhere. But there is something important about the materiality of a traditional zine. There’s something different about getting a zine in the mail, or at a concert venue, or at a record store. It’s something you can hold and feel and smell. As opposed to something you can pull up on the Internet at any time.

I was talking with someone recently about this, and she asked me, “In 100 years, do you have more confidence that a zine you made would be found online somewhere, or turn up in an attic somewhere?” Her answer was the attic. It’s hard to know what the digital future is. At least a traditional zine would physically exist.

You study zines and outsider writing. How seriously are zines taken in academic circles?

Growing up, I was always aware of zines as a kind of publication that accompanied the emergence of punk in the 70s and post-punk in the 80s. I was aware of the political zines of the 80s and 90s, and Riot Grrrl, things like that. But I was struck by the fact that so little scholarship had been devoted to this very interesting genre. So in recent years — the last five have been more intense — I started looking into zines as a scholar as opposed to a reader. And I quickly learned that, lo and behold, a lot of people were interested in zines, and a number of distinguished libraries were archiving zines, and other scholars were beginning to write about zines, and people like me were starting to teach them in their classrooms.

What’s the value of teaching zines in a college classroom?

One thing in my field — composition — that we look at is genres outside the academic institution, as well as inside. And for me, one of the most vital genres outside of academics is zines: these quirky, slapdash publications that circulate among particular communities in particular locales. There’s a value in looking at them because they allow for multi-modal writing. They combine many different modes of expression. So a typical zine, for example, might have drawings, handwriting, photos, text, photocopied text, stickers, etc. And it will be that way because the author made choices about argument, rhetoric, design. It’s very different than a standard, alphabetical, linear text.

What do you think the future is for zines?

I think most people think that zines are waning. But as I mentioned, libraries are now archiving them and scholars are studying them. There’s been articles in The New York Times, the Guardian, lots of coverage in recent years. Events like this Saturday’s fest keep popping up. There’s one in Brooklyn, a big one in Chicago. People are interested in this form of textual making. It’s creative, it’s rhetorical. It’s a community thing. People discover each other through zines.

Local creative arts are getting creative