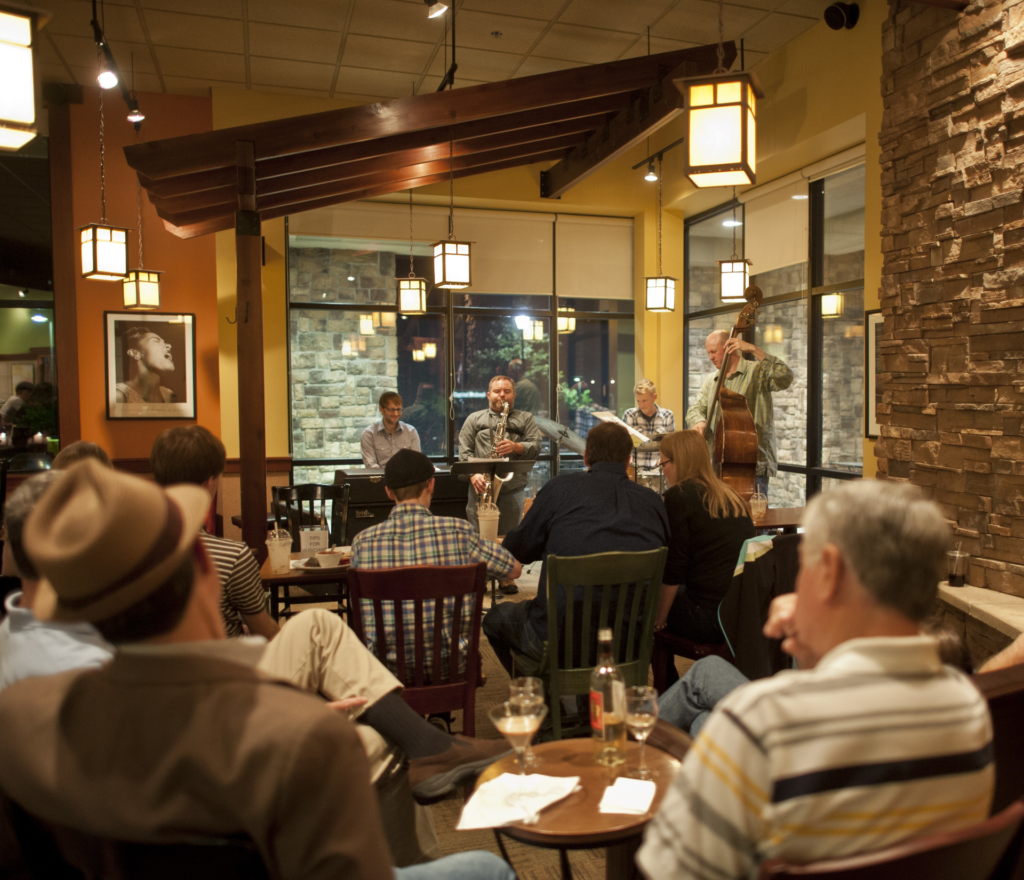 If you build a successful suburban coffeehouse and jazz club, they will come. “They” being other Johnson County shopping centers, that is.

This summer, KC’s suburban jazz oasis, Take Five Coffee + Bar, will move from its current space at 151st and Nall – once a defunct Caribou Coffee space – to the southeast corner of 135th and Metcalf, in the new Corbin Park shopping center. It’ll be located behind the large Von Maur store, and right by Firebirds Wood Fired Grill (recently reviewed by Charles Ferruzza) and Brew Top Pub and Patio.

Four years ago, when Lori and Doug Chandler brought Take Five to life, they envisioned music as part of the plan – but it wasn’t originally going to be jazz. They started with a lone guitarist, then they agreed to host a fundraiser for Hermon Mehari’s group Diverse. When Lori Chandler heard jazz in her little venue, things changed. Other groups started calling to ask if they could perform there, too.

Now, Chandler notes that most weekend nights, jazz shows pack the current location. It’s no wonder that both Corbin Park and the nearby Prairie Fire shopping center courted Take Five with offers.

“Pretty clearly, we’ve outgrown the space we’re in,” she says. “We’ve accomplished what we can there.”

With the move, Take Five will more than double its size (from 2,056 to 4,800 square feet). Jazz fans might be concerned because a delight of the current location is its magnificent acoustics. Chandler knows that.

“We have the opportunity to build this from the ground up with the best acoustic design in mind,” she says. Chandler has hired John Story, chief sound engineer for the KC Repertory Theatre, who designed the wonderful sound in the new Broadway Jazz Club.

Currently, Take Five makes space for a band by clearing tables and chairs from in front of the windows. But in the new space, Chandler says, there will be an actual stage large enough to support a large band. A grand piano and a house drum kit will be new additions, too.

Food service will also grow, from the current oven-microwave-panini press setup to a complete kitchen. A full breakfast menu will be available, likely throughout the day, with the rest of the menu under development.

“We’re not turning into a quote-unquote restaurant,” she says. “We don’t want people to feel we have to turn a table. We want the same coffee-shop, living-room aesthetic.”

As always at Take Five, jazz will be an important factor. They will add a Sunday brunch with jazz, bloody marys and formosas.

“Out of the gate, we’ll have jazz Friday and Saturday nights,” Chandler says. “We’ll keep the hours and set times the same [as they are now] until we figure out what the market really wants out there.”

In late June or early July, Take Five Coffee + Bar will close for a week to 10 days as the Chandlers begin the move into the next chapter of one of the Kansas City area’s most surprising jazz success stories. We’ll keep you posted on the progress.