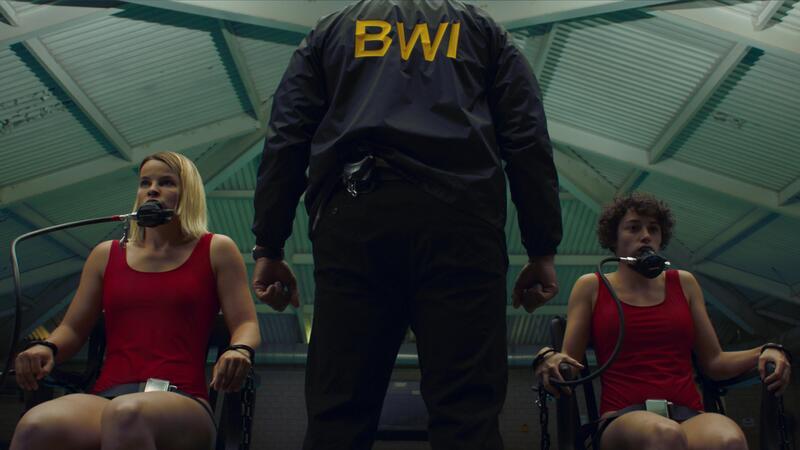 What if the hysteria-driven violence of the Salem witch trials endured well into a contemporary America, where witches really did exist? That’s the intriguing premise of Elle Callahan’s sophomore feature, Witch Hunt, and it’s a shame that such an ambitious idea is ultimately marred by muddled worldbuilding and concerning appropriation of all-too-real discrimination.

At first glance, the film’s opening imagery of a screaming woman being burned at the stake in New England could’ve been drawn from any story about Puritan-era witch hunts. Then the camera pulls out to reveal we’re very much in the present, as the woman’s two daughters look on helplessly. Sure, this version of the United States has magic, but the torture of women who practice it has resulted in a country that’s more Handmaid’s Tale-meets-YA dystopia than The Craft.

Cut to a classroom three months later, where teen wallflower Claire (Gideon Adlon) is trying to get by at her new California high school. She’s tenuously fallen in with a mean-girl friend group who torment anyone who might have magical lineage. They’re not alone—America has essentially banned witches’ existence altogether, establishing a federal Bureau of Witchcraft Investigation and an 11th Amendment that strips witches of their basic constitutional rights.

The existence of magical beings leaves Claire dealing with more than average teen angst. She can’t have any of her new friends over to the farmhouse she shares with her widowed mom, Martha (Elizabeth Mitchell) or younger brothers (Cameron and Nicholas Crovetti). It wouldn’t look great if witch-hating teenagers discovered Martha frequently hides fleeing witches in the walls.

Claire is starting to resent her mom’s secret operation when the family receives two new Mexico-bound refugees: Fiona (Abigail Cowen) and Shae (Echo Campbell), the same two girls who watched their mother burn at the beginning of the movie. The girls’ stay becomes longer than anticipated after thuggish federal agent Hawthorne (Christian Camargo) begins sniffing around as the girls prepare to make their escape. Claire’s disdain softens as she bonds with Fiona, whose teenage years are also burdened by this particular strain of American vitriol. Their friendship grows as Hawthorne and his men close in on the safehouse, forcing Claire to reckon with repressed magical powers of her own.

Witch Hunt functions best in its quietest moments, from Claire confronting Martha about the weight of shouldering her secret to Claire and Fiona commiserating over their dreams of freedom through an on-the-nose but endearing discussion of Thelma & Louise. Adlon and Cowen’s performances are standouts, and I can’t help feeling the film may have worked better as a more contained coming-of-age tale.

While Callahan’s high-concept alternate United States is admirable in concept, it never quite comes together. The high stakes of this world are undermined by characters’ stupidly dangerous actions, making it hard to care about the tense third act as much as the film clearly wants you to. The magical lore is never directly fleshed out, either, with more interesting threads (like a demon-esque woman who shadows Claire) hastily discarded. The magical effects themselves are low-grade, which could be much more easily forgiven if we had a better handle on what these powers meant anyway.

What’s more concerning is Witch Hunt’s whitewashed central allegory. The witches’ plight is meant to mirror American xenophobia and our country’s notoriously cruel immigration system — many witches are detained in camps, and a crude border wall has been erected. The operation Martha is involved in is a variation on the Underground Railroad and the safe houses established during the Holocaust. But in this case, the persecuted class is entirely composed of redheaded white women, with seemingly no thought as to how racism and misogyny have always intersected in similar, real-life systems of oppression.

In one early scene, a Black man driving a stowaway witch to the border is pulled over and brutalized by Hawthorne in one of the film’s most violent scenes. That the optics of the scene are never addressed is absurd, given how white women’s quest for liberation throughout American history has often directly ignored and excluded people of color. This queasy metaphor could’ve been avoided if Callahan’s witches weren’t exclusively white. Instead, it comes off as an ignorant white feminist choice at best and shallow appropriation at worst.

For years, witchcraft has been retooled as a fascinating metaphor for women fighting to survive and thrive outside patriarchal confines. Witch Hunt could have been an interesting variation on this growing subgenre—if only it had a self-awareness that matched its lofty intentions.