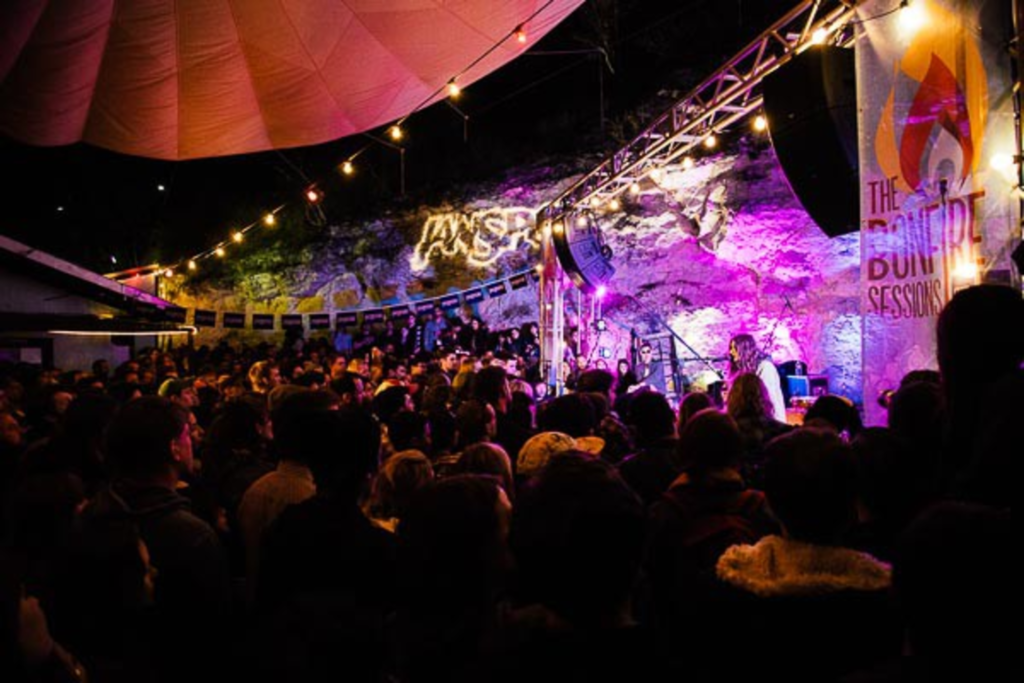 For the full slideshow from SXSW Day Two, click here.

Sometime in the early afternoon on Wednesday, I managed to rouse myself from the comfort of my bed, feeling that I was perhaps more mentally prepared for the SXSW spread than I had been the day before. This time, at least, I had a vague agenda. First on my list: Jessica Lea Mayfield at the ATO Records day party, down at the Billy Reid/Weather Up stage. Which happened to be, like, a million miles away from all the action on East Sixth and Red River Road.

It was the perfect way to start, actually, because instead of the congested body-smashing contest that has taken over the central venue areas, I rolled into a casual backyard setting, just as Mayfield was taking the stage. I saw her back in 2011, opening for Justin Townes Earle at Minneapolis’ First Avenue, and I liked her so much then that I purchased her entire catalog. The Mayfield I saw perform yesterday sounded the same, but she was different from the sweet-looking girl I remembered. With her choppy haircut dyed pale pink, dark eye makeup and leather jacket, the 24-year-old came off more as a tough-as-nails biker babe.

Mayfield’s set was mostly songs from 2011’s Tell Me, with the addition of one or two tunes I couldn’t place that might have been new. Her voice is a remarkably fragile-sounding thing, with the slight hum of an Ohio-tinged country accent, but she warps it around sizzling, blown-out rock guitars. “I’ll Be the One You Want” and “Blue Skies Again” grow from their plaintive beginnings with the help of fleshy instrumentation, and listening to Mayfield’s voice feels as lonesome as being dropped into a crater on the moon. There are plenty of other things going on in this little backyard – bottles clinking, girls laughing, the sound of some garage-y guitars from some venue down the road – but Mayfield’s voice is all-encompassing. She’s the only thing for miles. 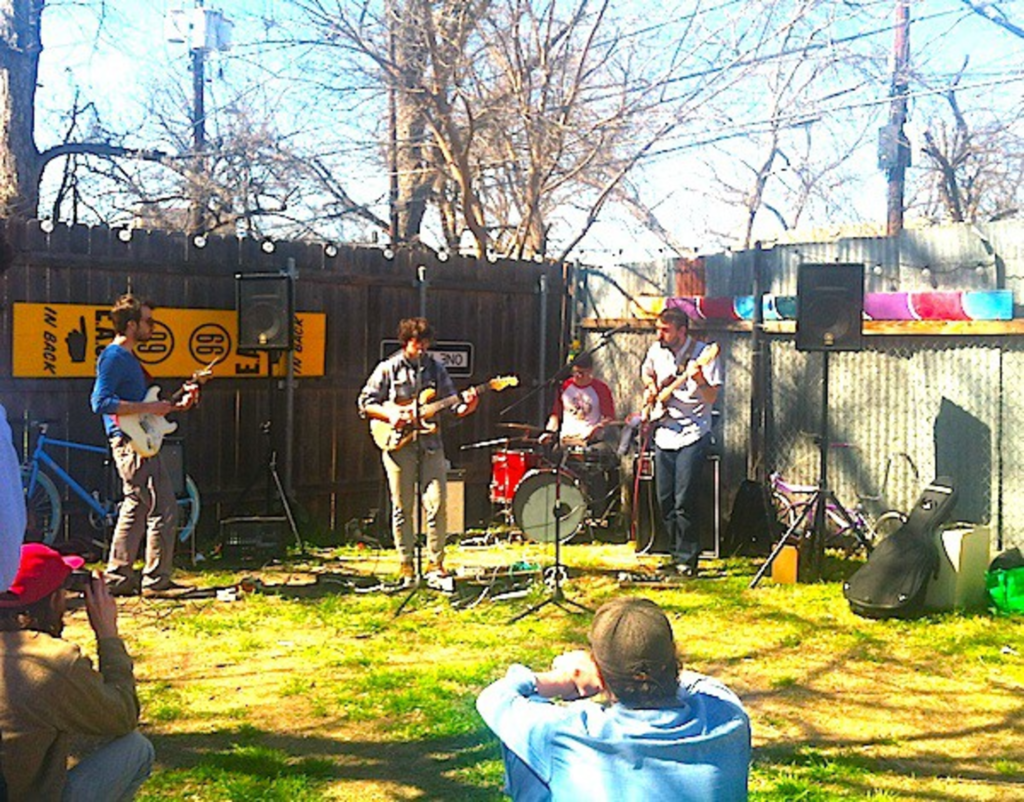 After Mayfield ended her set, I started on my route to the Side Bar for Miniature Tigers, but got sidetracked: There was some moody, fuzzy guitar that pulled me into Amy Poehler’s Smart Girls at the Bat Caves venue, and I just had to know who was playing. Lo, it was Taryn Miller – Lawrence’s Your Friend. I caught the last half of her set with a full band.

There’s no dressing it down: Lawrence has a blue-ribbon winner in Miller, and we can be damn proud to call her ours. Miller has a strange, hypnotic pull – even in the bright sun, with only a handful of people to see her and the distracting scent of barbecue in the air. She seems to barely open her mouth when she’s singing, and it’s hard to tell where she pulls her voice out of. She’s one of the few acts that sounds just as good live as she does on record, and her performances utterly lack pretension. (Check out this week’s feature on Miller, who recently signed to Domino Records.)

I moved on to the Side Bar afterward, hoping to catch Miniature Tigers, and met up with Pitch photog Zach Bauman. But Side Bar was gross – a crammed, bottlenecked space – and we quickly decided to move on. We bounced on to Shangri-La for the MidCoast Takeover, hoping to see some familiar faces and hometown talent, and we got that immediately.

[page]Well, almost immediately. Columbus, Ohio’s Two Cow Garage has more or less been adopted by KC at this point, and they were just taking the stage. Lead singer Micah Schnabel’s vocals are fascinating, like he has swallowed an ashtray and washed it down with a bottle of something cheap, but there’s a ferocious power there. The three-piece played their songs like they were leading a charge with them, and I felt like Two Cow Garage was probably the kind of band whose members would want to be buried in their sweaty, postshow T-shirts. 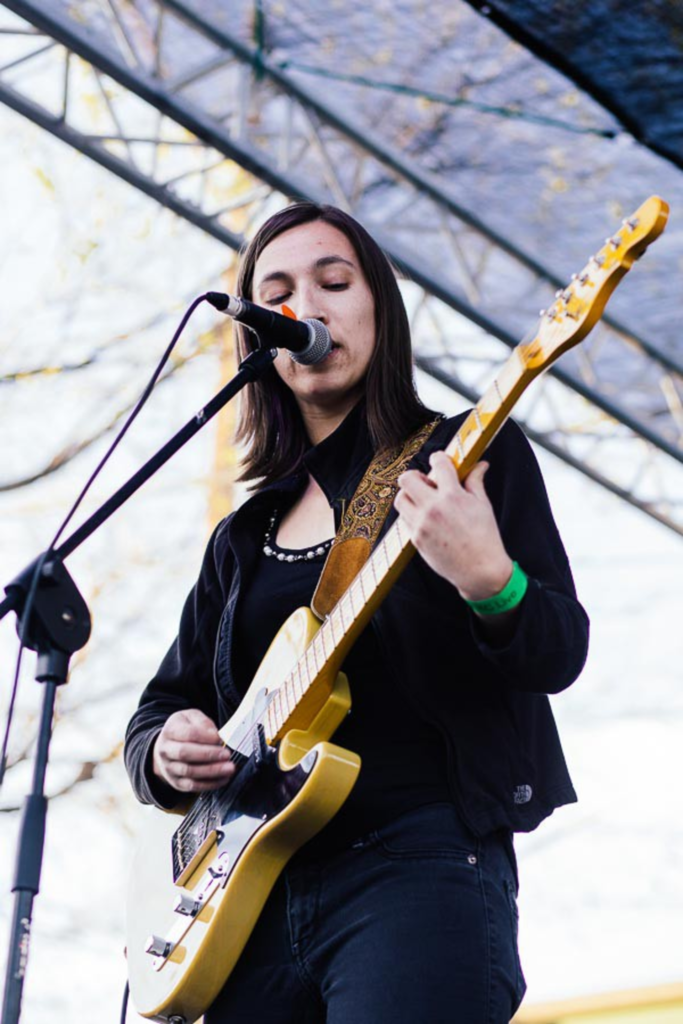 After a margarita-and-phone-charging break, I was back at Shangri-La for Katy Guillen and the Girls  – easily one of my top favorite acts in Kansas City right now, and I don’t even care that I’m supposed to be impartial about it. Offstage, Guillen is unassuming. Onstage, she is wild. She shreds her guitar like this is all just child’s play for her – I wouldn’t want to put a gun in her hands – and pulls some impressive faces while she’s doing it. 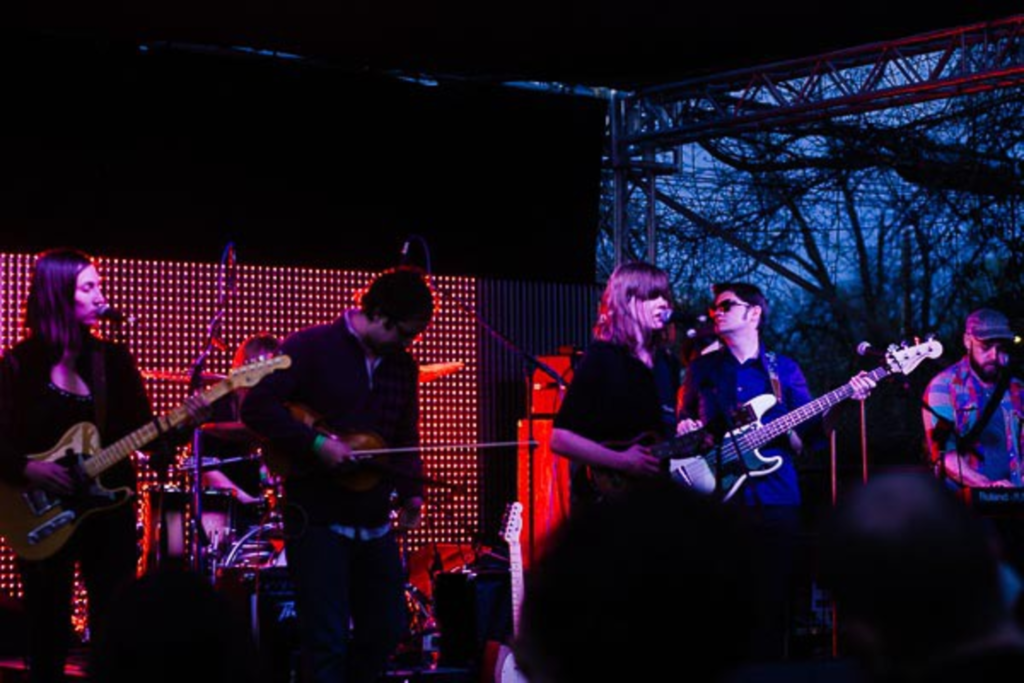 Katy Guillen and the Girls morphed into Claire and the Crowded Stage as Guillen’s bassist Claire Adams took center stage. Five others joined her: a violinist, an accordionist, a clarinetist, a keyboard player and another drummer. Crowded, indeed. It was all the best kinds of sounds: joyful, raucous stuff, and perfectly danceable. The adorable Australian vendors inside the Royale with Cheese food cart to stage right were dancing as they cooked grilled cheeses and fried home fries. It was a perfect time: the Austin weather had chilled out a bit, and Shangri-La was comfortably full. If only all the showcases were this accessible. 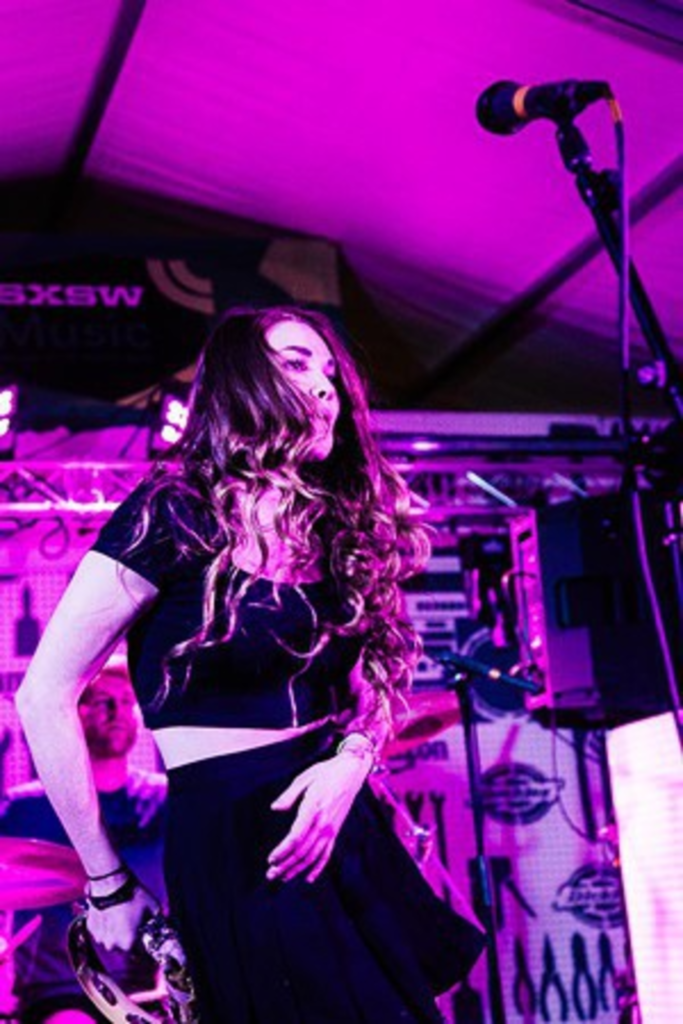 But we couldn’t hide out in our comfort zone – especially when there were so many more new things to see. At the Dickies stage at Bangers, the NYC trio turned touring five-piece, Misterwives, brought some high-energy pop. I mean, like, really high-energy: lead singer Mandy Lee might be petite, but she has Red Bull running through her veins. She twirled, danced and bounced all over the stage, never once lost her smile. I ran into Isaac Gale from the Marijuana Deathsquads. “They sound like a Disney band,” he said. Not inaccurate. 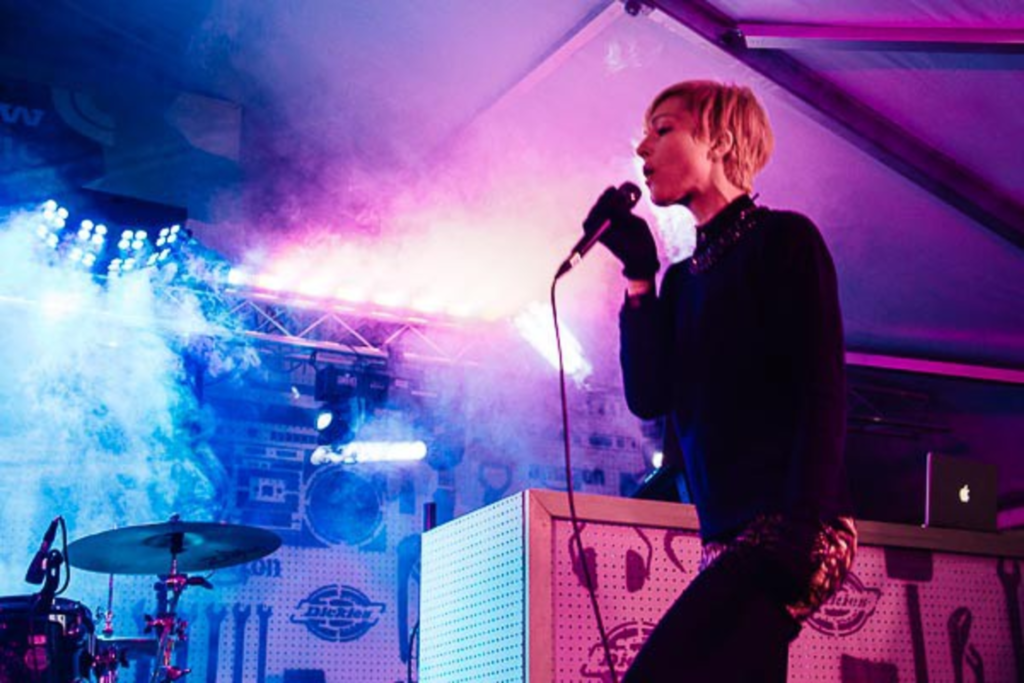 Poliça was surreal. It had been a long time since I’d seen Channy Leaneagh perform, and I couldn’t help but recall the very first time, in the fall of 2011, at the now-closed Nick and Eddie’s in Minneapolis’ Loring Park. It was Poliça’s very first show as a band, and it was a brief, glimmering performance, full of promise. The show last night at Bangers was much different. Leaneagh has come into her own entirely as a performer, and she dominated the stage in every respect. Her sinewy frame moved with the synths as smoke engulfed the stage; sometimes, she seemed more dream than real, as though she was performing a choreographed piece. 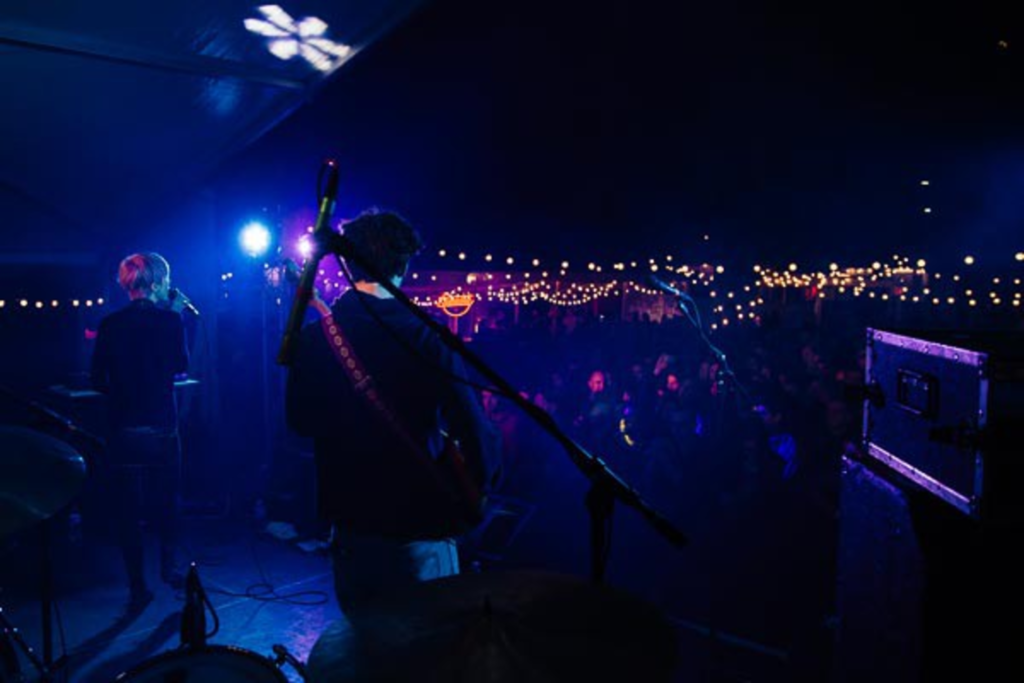 Having missed Kurt Vile on Tuesday, I was determined to catch him last night. We scooted down to Cheer Up Charlie’s, passing a long line waiting at Stubb’s for St. Vincent. Like many of the venues on East Sixth and Red River with larger acts lined up, both Stubb’s and Charlie’s were at capacity – a one-out, one-in kind of deal. Or sometimes one-out, three-in. I have no idea how anyone was keeping track of capacity, really. 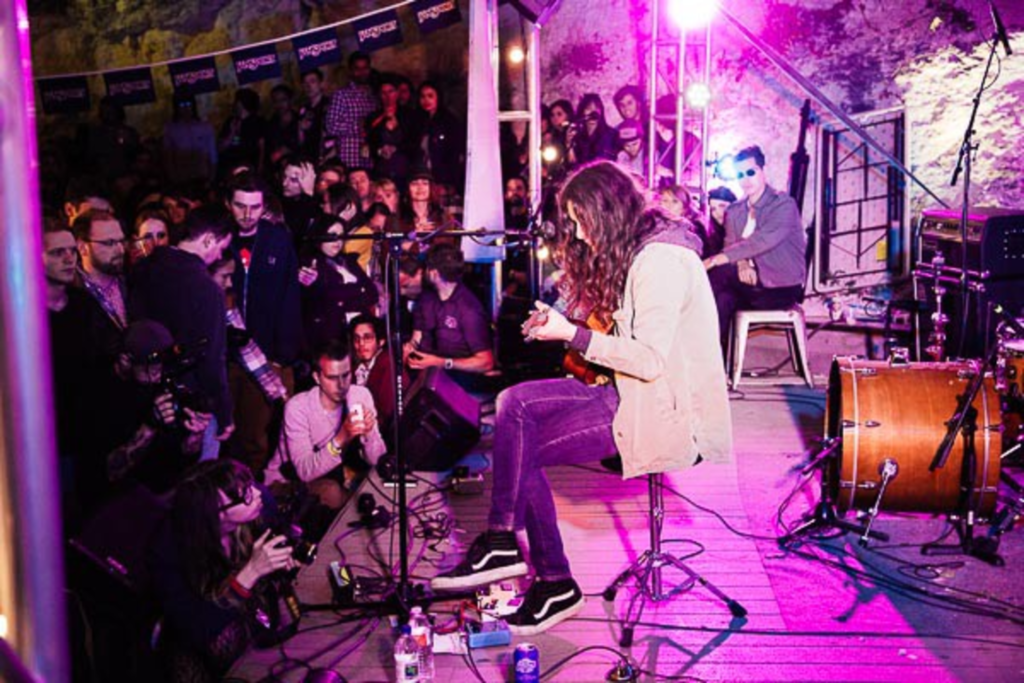 But we got in for Vile. It was elbow-to-elbow, and I was dead on my feet at that point, but this set would not be ruined for me. Vile, who remained seated for his entire set, was nonetheless glorious. Vile’s guitar was dark, and his spacious voice climbed up into the night air.

We decided to call it a night after that – 12 hours of walking and drinking and listening to music make for a hard life, man – but on our way out of Charlie’s, there was a mess of cop cars and lights. You’ll have heard the reports by now about the drunk driver who came tearing down Red River Road, killing two people and injuring dozens more. It was altogether sobering, and hopefully something there won’t be any more of this week.