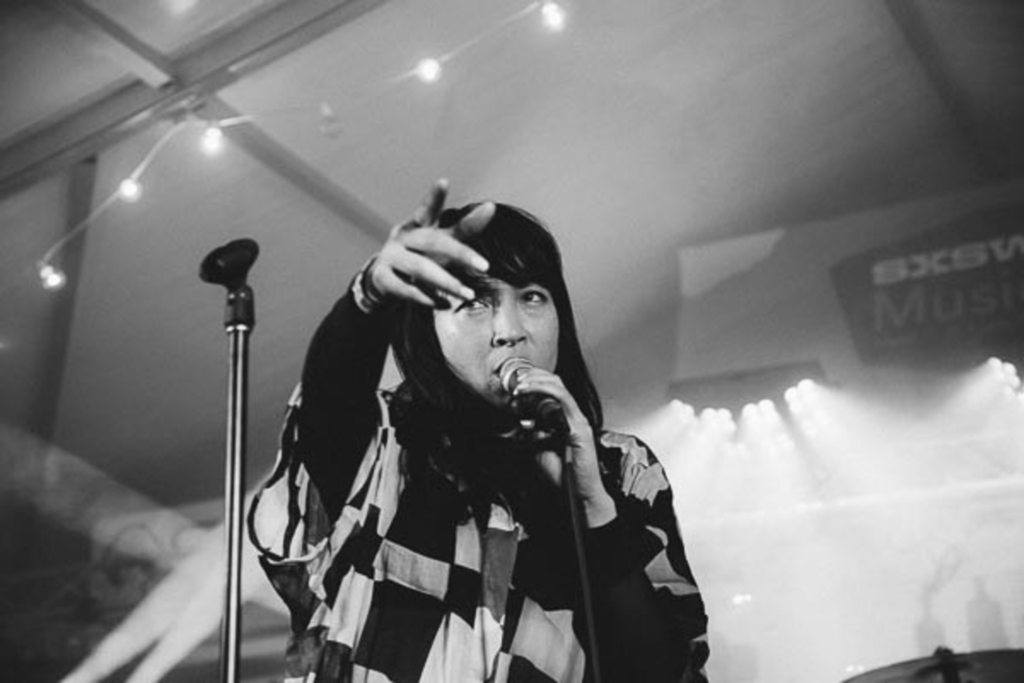 For the full slideshow from SXSW Day Three, go here.

Aside from acting as SXSW headquarters, the Convention Center also boasts two generally well-curated official day stages. This is kind of odd because the stages are erected inside ballrooms, and although the sound isn’t bad, it doesn’t feel especially showcase-y. Some bands can make any venue work – others, not so much. 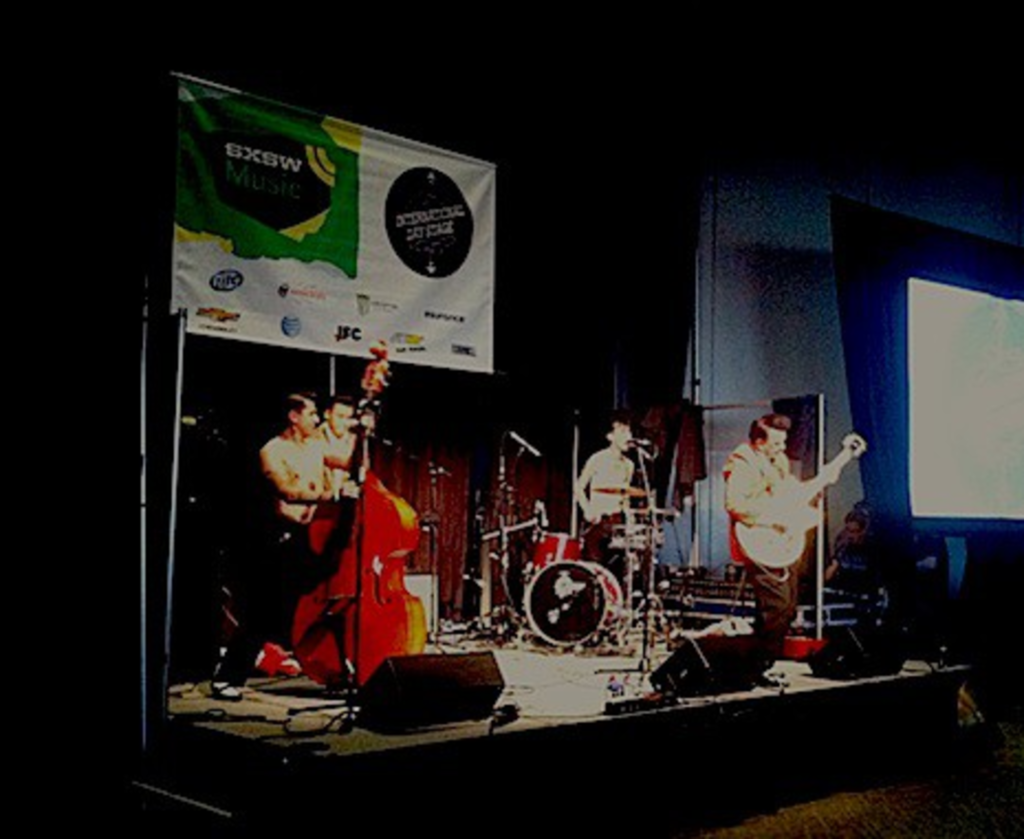 On my way to the KCSN Radio Day Stage for the Dum Dum Girls, I was drawn into the smaller International Day Stage by a rowdy rockabilly tune from Mexico City’s Rebel Cats. Two of the foursome had their shirts off, and all of the gentlemen boasted meticulous Presley-era coifs. The Cats were damn impressive for 2 p.m. in a brightly lit, very conference-looking room, as Lalobilly (that’s what Facebook says his name is, anyway) climbed atop his upright bass, beat his chest and slapped his strings. As it turns out, all the members have a special acrobatic hidden talent. Vince Monster scaled his drums as he played them, and his dad, Vince Van Rock, had a guitar solo in which he played riffs with his teeth and posterior. I wished I had been able to catch them on a different stage – one with better lighting and a more engaged crowd (though the people around me seemed as delighted and surprised as well by what they were seeing). 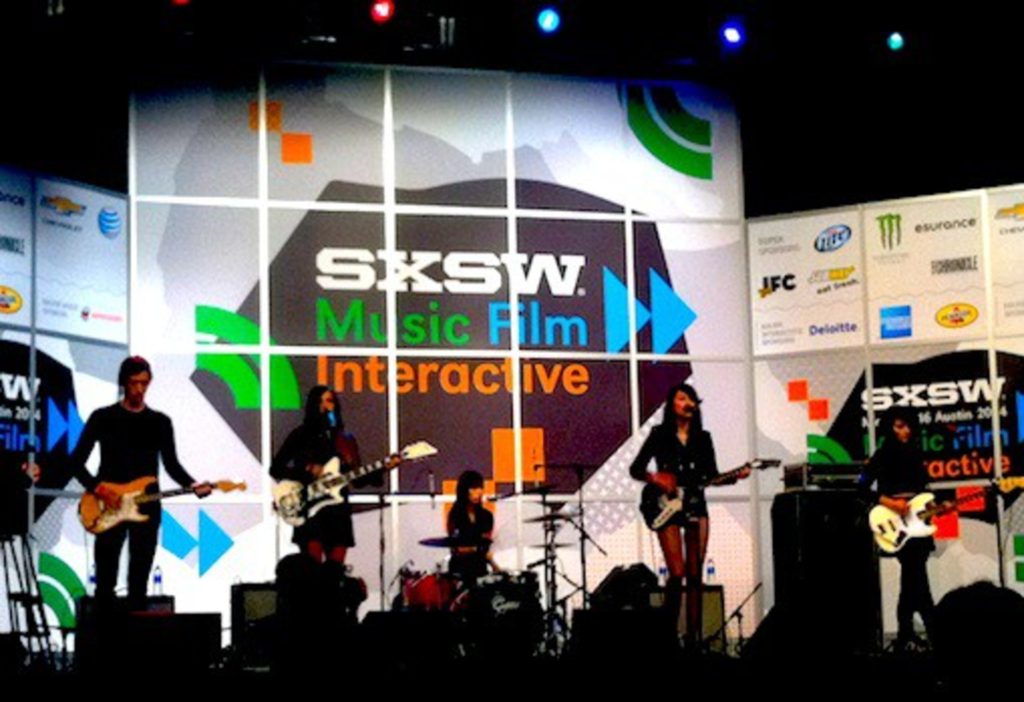 Just down the hall, the Dum Dum Girls were setting up. The Los Angeles-via-New York five-piece spent a good deal of time doing a sound check before they played a terse 40-minute set with what seemed like very little enthusiasm. I blame the ballroom; rows of seats were filled and periodically emptied throughout the Dum Dum’s songs as SXSW-ers made notes and rotated out, eyes glued to their iPhones. Some girl was dishing up what looked like microwave pizza from a cart in the back of the room. Still, the band’s renditions of “Bedroom Eyes” and “Coming Down” were accomplished well enough, and I feel like given another opportunity, I’d want to see how the Dum Dum Girls perform on their own terms. 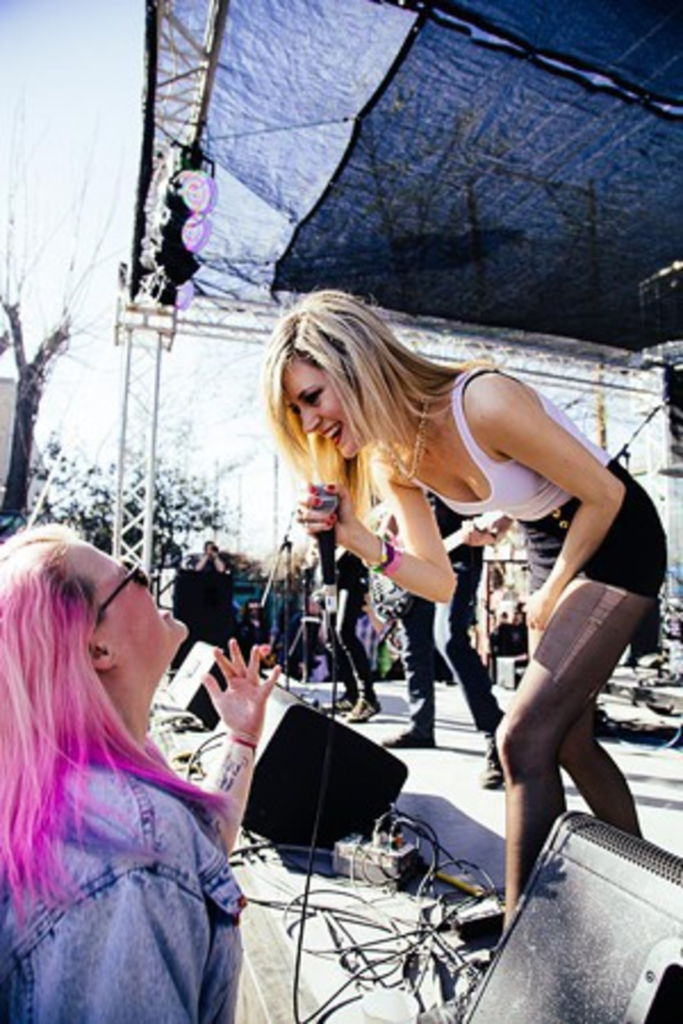 Pitch photog Zach Bauman was in line for Fucked Up at the Pitchfork Day Party, and it didn’t seem to be going anywhere, so we hauled it over to the MidCoast Takeover in time to catch most of Beautiful Bodies‘ set. Alicia Solombrino is a firecracker onstage, and an expert at hyping the crowd. 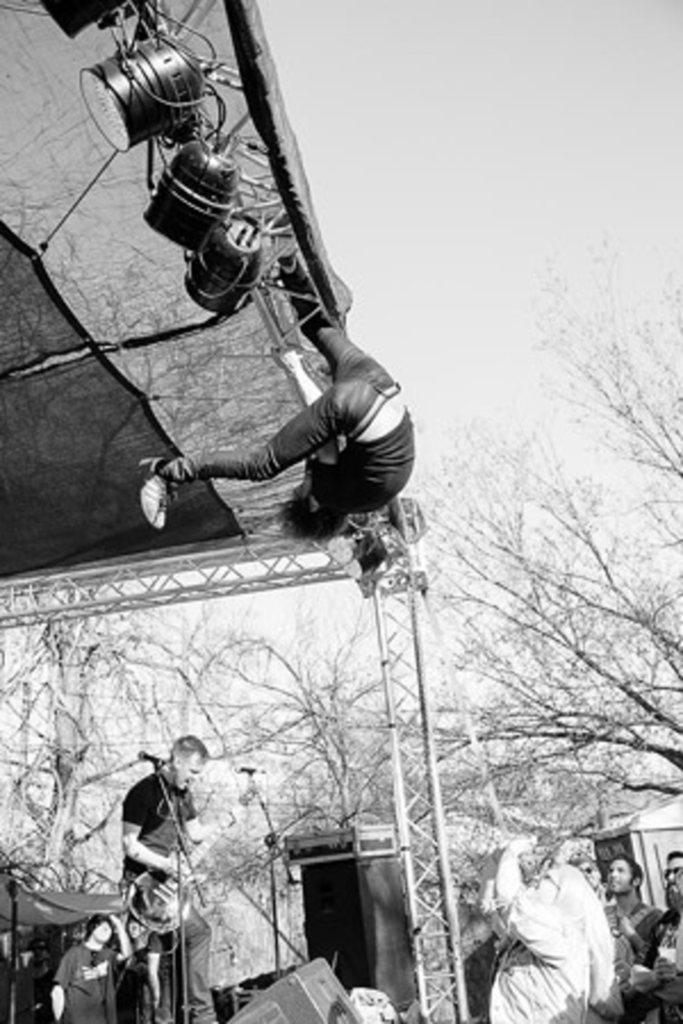 Often at these SXSW showcases, things are running on such a tight schedule (thankfully) that bands rarely have time to interact with the audience or get personal; not the case for Kansas City’s Beautiful Bodies, which had the luxury of an hourlong block at Shangri-La. Solombrino used this opportunity to get the audience waving, shaking and stomping at her bidding, at one point jumping down and singing a few verses in the middle of the pit. Drummer Thomas Becker monkeyed his way to the stage frame and used the metal bars as an additional percussion element.

“I’m not gonna tell your mom you did that,” Solombrino said wryly as he jumped down. 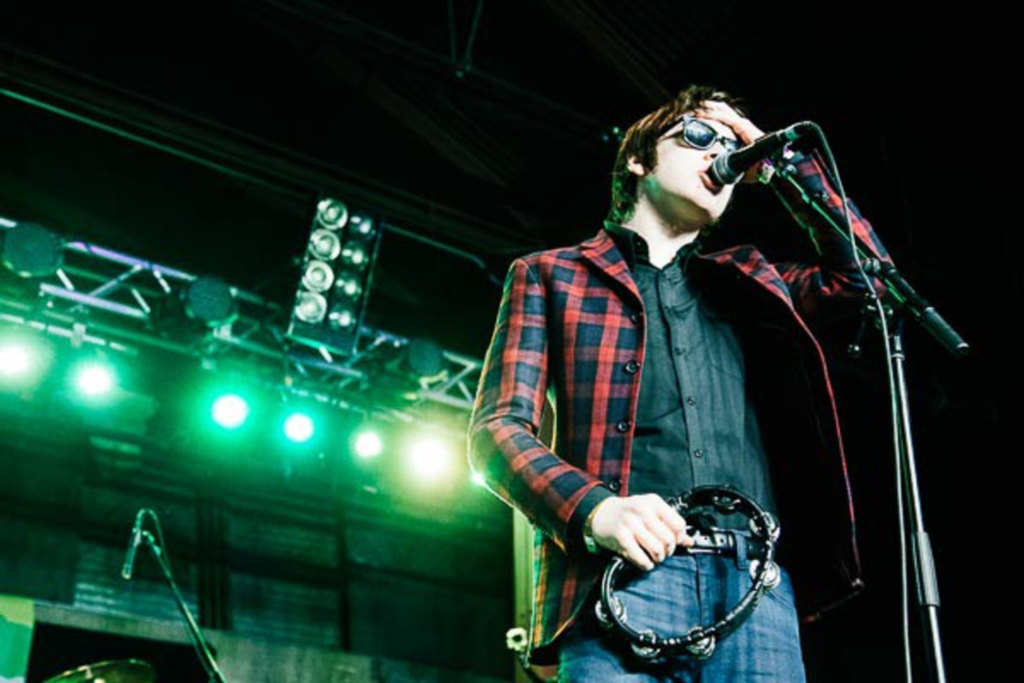 Later, at the 1100 Warehouse, we caught the Strypes, an Irish band that is part of the legion of U.K.-imported buzz bands. I was interested to see if they would live up to the hype. The four-piece specializes in a version of heavy 1960s blues rock, a la the Rolling Stones and Dr. Feelgood. I had heard the band members were young, but I didn’t realize how young – between 16 and 18 years old. But as much as the Strypes look like babies, they play like grown-ass men – blistering guitar riffs, unstoppable drumbeats, unadulterated aggression. 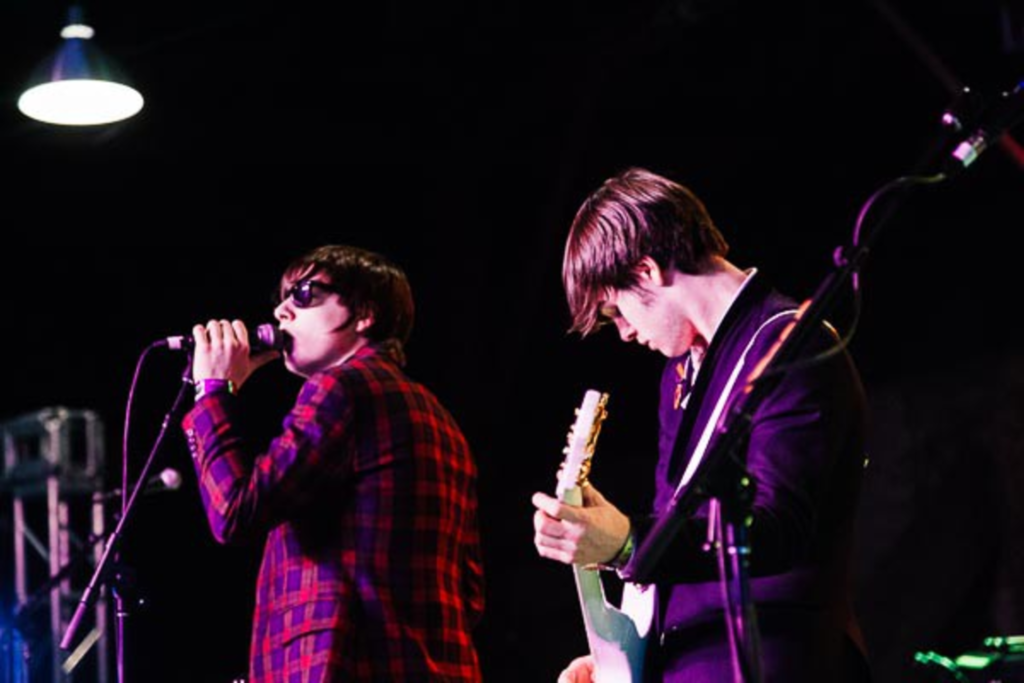 Onstage, the boys act like they know their age and don’t want you to cling to that. Lead singer Ross Farrelly kept his sunglasses on for the entire set at the indoor venue, twirling and tossing his tambourine when he wasn’t using it. All the members were chewing gum. They smiled at each other but rarely at the crowd. They seemed to take themselves pretty seriously, and sometimes it came off as posturing, but they can hardly be faulted for that. The crowd was largely composed of older listeners – folks who, I suspect, are nostalgic for the original thing, but they all seemed pleased as pie to be there. 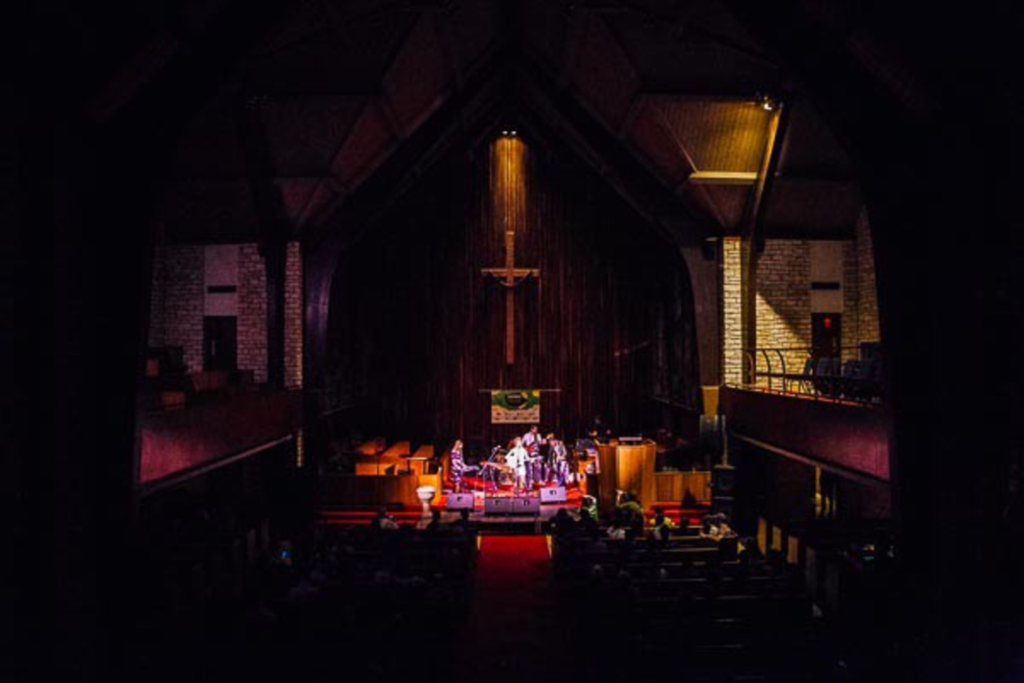 As daylight faded, we trekked over to the Central Presbyterian Church for Haley Bonar. The Minneapolis singer-songwriter has long been a favorite of mine, and there could not have been a more perfect venue for her. Bonar’s style is both sparse and rich, and her voice is the grandest instrument of all. Her set felt kind of like getting religion. 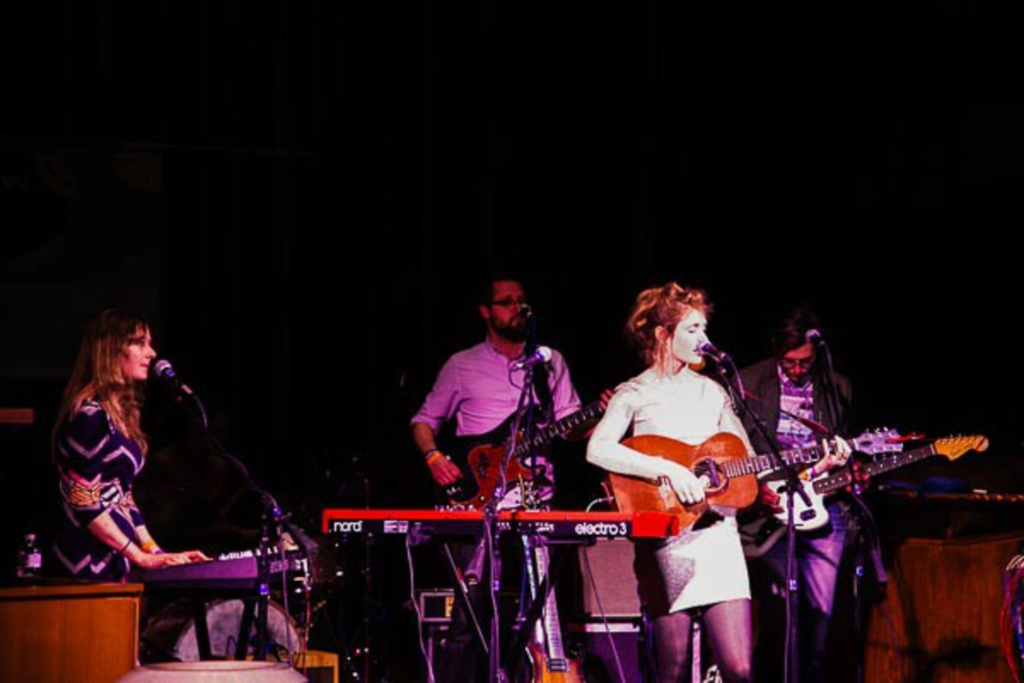 I sat in a pew, trying to stuff down memories of a childhood spent in a starchy Catholic-school uniform, while Bonar delivered her brooding songs with vocals that whipped around the room like wind on a wide-open prairie. It was an intense, electrifying set made up of tunes from Bonar’s last album, Golder, and her upcoming album, Last War (due in May). She had me feeling like I needed to go find Jesus or something. The church was full for her and pin-drop quiet. 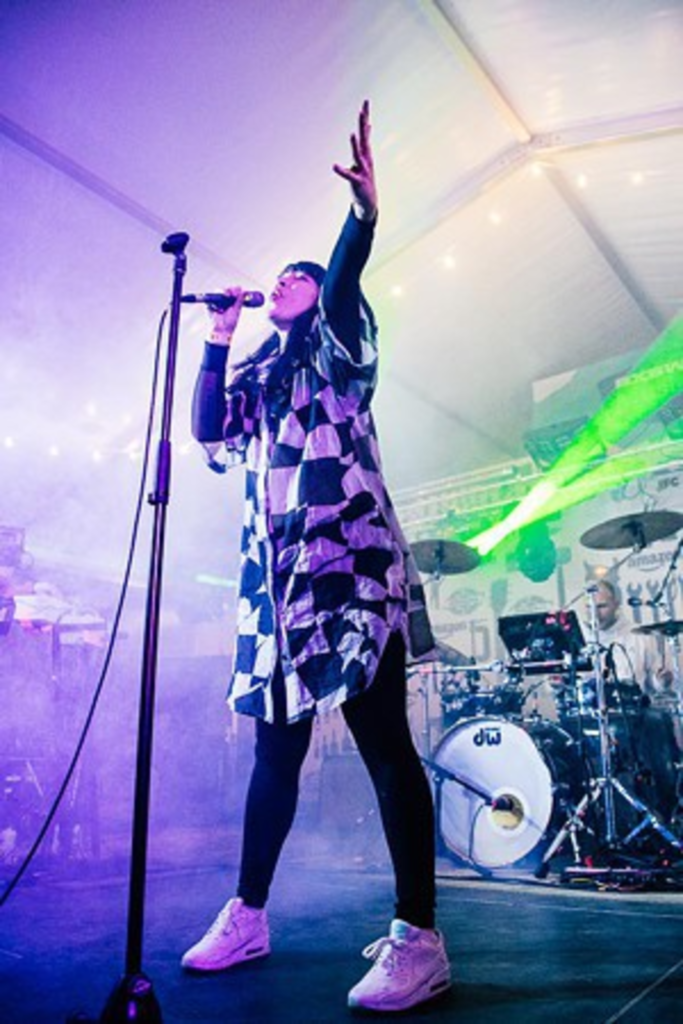 Gorgeous as Bonar was, we needed a big change of pace if we were going to keep on slugging through the evening. I barely made it into the at-capacity Bangers for Little Dragon, but what a rewarding set: the Swedish electro-pop outfit transformed their moody, dark songs into booming dance tracks. Lead singer Yukimi Nagano writhed along with ominous synths, her rocky jazz voice an oddly perfect match. 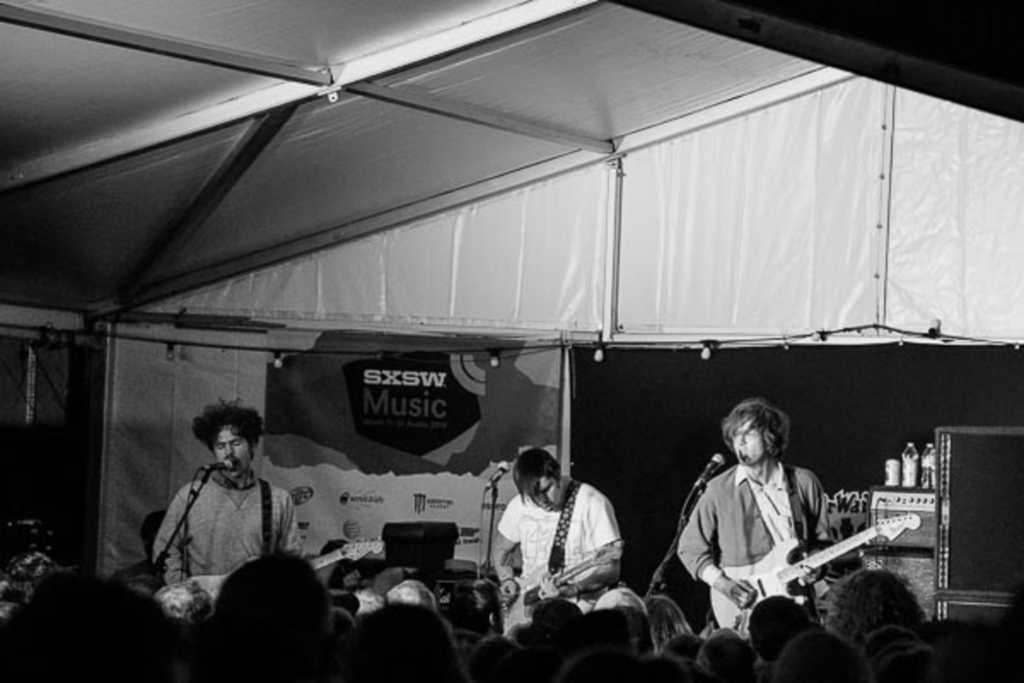 Our last stop of the night was at Bar 96 for Brooklyn’s Parquet Courts. It was another capacity show, and at the worst venue I’ve attended so far – basically no visibility unless you happened to be over 6 feet tall, and with a crowd so thick there was no chance at edging closer. I hung out in the back, listening to the coarse, off-kilter slacker rock, straining to hear “Other Desert Cities.” As Austin Brown or Andrew Savage (I couldn’t see who) drolly sang the lyrics She had eyes like a Taco Bell drive-thru/Open late and there on purpose, I saw some girl get approached by a dude who seemed to be gently swaying to music that was coming from somewhere else. He wanted to “borrow” a cigarette, and then apparently decided he had found a new friend. Ah, SXSW: bringing people together, all kinds.