Despite a few tangents, the film’s core mystery and lead performance keeps it afloat 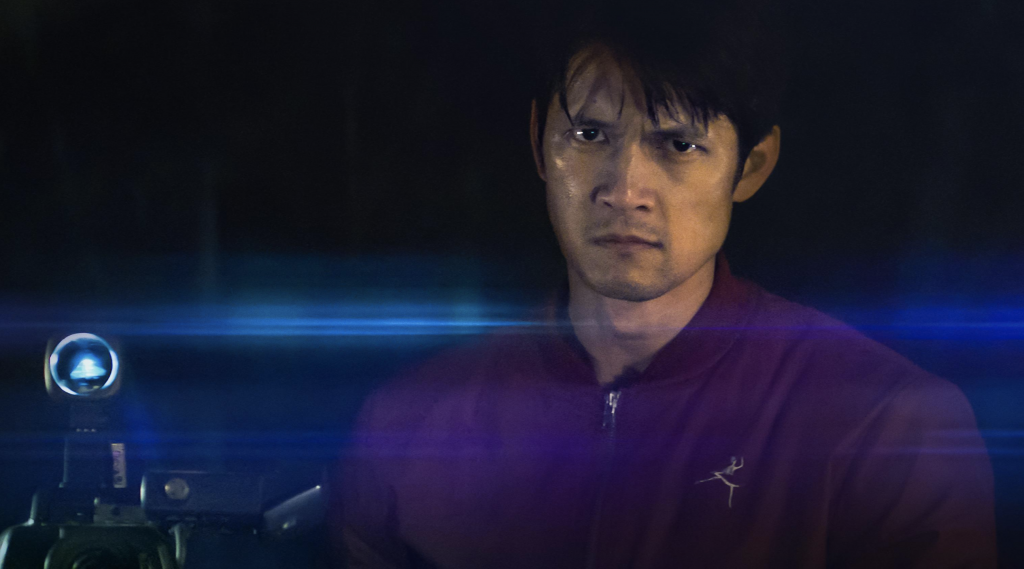 Broadcast Signal Intrusion would be a good film to double feature with Censor, which premiered at this year’s Sundance Film Festival. Both deal with obsession and grief, with the main characters fixating on something they see in a film. These digital ghosts are the catalysts for each character’s confrontation with their own pain. While the latter movie creates a better atmospheric horror, Broadcast Signal Intrusion has a much more intriguing mystery at the heart of it. Written by Phil Drinkwater and Tim Woodall and directed by Jacob Gentry, Broadcast has plenty of creepy elements but is held together by Harry Shum Jr.’s lead performance.

As a video archivist, James (Shum Jr.) spends most of his time logging videos of old broadcasts and going to group therapy where he doesn’t engage much. The film’s opening scene sets a wonderfully creepy tone but also clues us into James’ grief—he’s lost his wife, and he doesn’t know what happened to her. The lack of answers makes his descent into obsession understandable when a new mystery appears. One night while logging an old episode of a late night talk show, James notices a sinister broadcast interruption depicting a mannequin-like figure with unsettling facial distortions and movements speaking complete nonsense. The video is from 1987, 12 years before 1999, when this story takes place. Despite a note from his boss to leave the matter alone early on in his investigation, James embarks on a journey to uncover the dark conspiracy behind the pirate broadcasts.

It’s a strong beginning that sets up two mysteries, but the pacing soon gets off and the film leads us down a few tangents. While the main mystery of the broadcast signals remains intact, the momentum of the investigation stalls. James meets Alice (Kelley Mack), who’s been following him for some time. The two team up after discovering there could be a link between the broadcasts and the disappearances of women, including James’ wife, but these scenes ultimately lend no real weight to either mystery as they continuously stumble on one red herring after another. The film ends up feeling longer than it needs to. However, once it gets back on track, it slides nicely into a strong and disturbing end.

Shum Jr. captures James’ grief and obsession perfectly, never straying too far into camp or chaos. There’s a level-headedness to James that reminds us that even though he’s still grieving, he’s able to make rational decisions and follow his intuition, despite being told to backoff. Even still, when the film calls for it, Shum Jr. is able to take James’ to a place that’s exciting and a little bit deranged, but completely understandable.

Using disturbing broadcast signals as its main horror element is really effective as it also points to a subliminal messaging fear. This is brought to attention even more as the film drops into dream sequences occasionally that aren’t immediately apparent. Broadcast Signal Intrusion is certainly worth adding to your Halloween movie list come October.