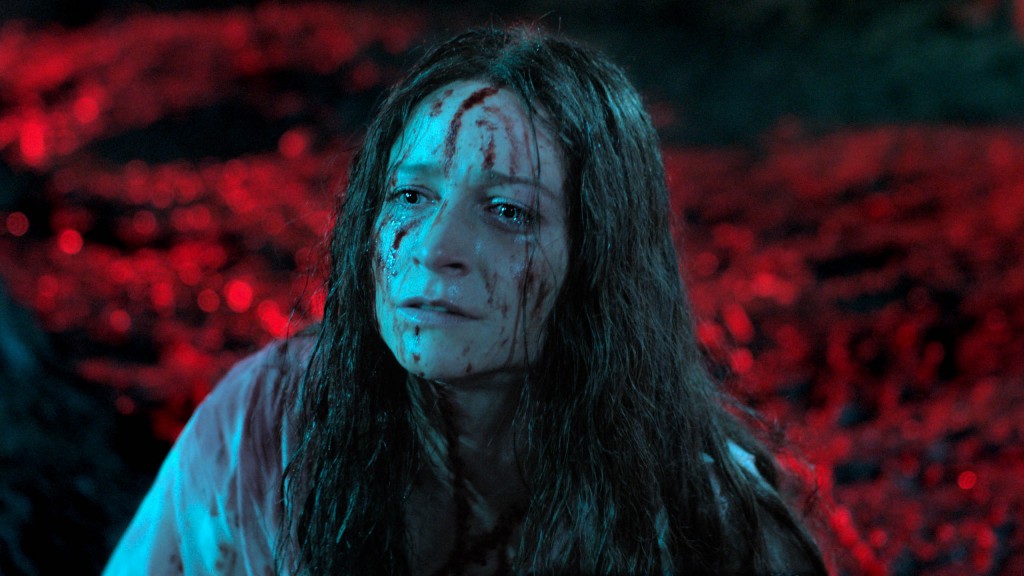 Niamh Algar appears in Censor by Prano Bailey-Bond, an official selection of the Midnight section at the 2021 Sundance Film Festival. // Courtesy of Sundance Institute.

During the ‘80s, British culture became engulfed by a gnarly horror phenomenon. Against the backdrop of conservative Thatcherism, “video nasties,” films characterized by what the government considered excessive gore and violence, surged in popularity. The ensuing moral hysteria resulted in the passage of the Video Recording Act, which mandated that all new releases be screened and censored before getting rolled out to the impressionable public. Affected films included low-budget schlock, but also genre classics by directors like George Romero and Dario Argento.

A film censorship office is the unlikely setting of Prano Bailey-Bond’s bold debut horror feature, Censor. But the director is clearly fond of blood and guts cinema, paying homage to the likes of Argento and Brian De Palma while crafting a tale about art and trauma all her own.

When we meet Censor ‘s Enid (a magnetic Niamh Algar) in 1985 London, she’s holed up in a dingy office debating whether an eye-gouging scene should make a film’s final cut. While she watches hours and hours of horror, Enid doesn’t get the same perverse thrill from these videotapes that many of her coworkers do. Instead, she watches them stony-faced, calling for less syringes to the eye and no more “Cannibal Carnage” footage until her colleagues are left rolling their eyes.

Unbeknownst to them, Enid’s sense of moral duty is borne from the trauma of losing her younger sister Nina, who mysteriously vanished back when they were playing together as kids. Controlling what the general public sees is her way of exorcising her own repressed grief and guilt, but the matter hangs heavily over her life nonetheless.

Things take a turn for the worse after a Londoner commits a gruesome murder seemingly inspired by one of video nasties the censorship team cleared. Enid is left to bear the brunt of the backlash alone, dodging nosy reporters and fielding threatening personal phone calls. In the midst of it all, skeevy producer Doug Smart (Michael Smiley) arrives at the office with a new Video Nasty from infamous director Frederick North (Adrian Schiller) called “Don’t Go in the Church.” The movie’s grisly slasher opening featuring two sisters evokes eerie memories of that fateful day from Enid’s own childhood. After she discovers that North’s main actress (Sophia la Porta) bears an uncanny resemblance to Nina, Enid becomes convinced that tracking him down is the key to piecing her life back together.

Censor takes a sharp turn into full nightmare territory in its third act, as Enid’s desperate search for closure rapidly turns her life into the macabre bloodfest that she’s shielded moviegoers from for so long. Bailey-Bond, who got her start doing horror shorts like The Trip and Nasty, is having a blast evoking VHS scares in the same vein as Peter Strickland’s giallo-esque Berberian Sound Studio. From the garish neon lighting to Emilie Levienaise-Farrouch’s chilling synth score, nostalgic genre buffs will find plenty to enjoy.

The film is more than capable of standing on its own, however, especially as it delves into the psychology of its lead. Although parts of Censor certainly prioritize style over plot, it’s nice to watch a Video Nasty love letter centered on a woman’s own twisted catharsis given that the subgenre has historically objectified and mutilated female bodies for entertainment. Bailey-Bond effectively uses Enid to raise the universal question of what dark human impulses are left to fester when we’re trained to bury them deep below the surface, and how art can evoke those inner demons for better or worse.

“People think that I create the horror, but I don’t,” a certain horror director muses right before the film’s climax. “[It’s] is already out there in all of us.” It’s a fact that Censor grasps confidently, and by the time that it reaches its spookily idyllic ending, the midnight movie clearly heralds the debut of an exciting new voice in horror.