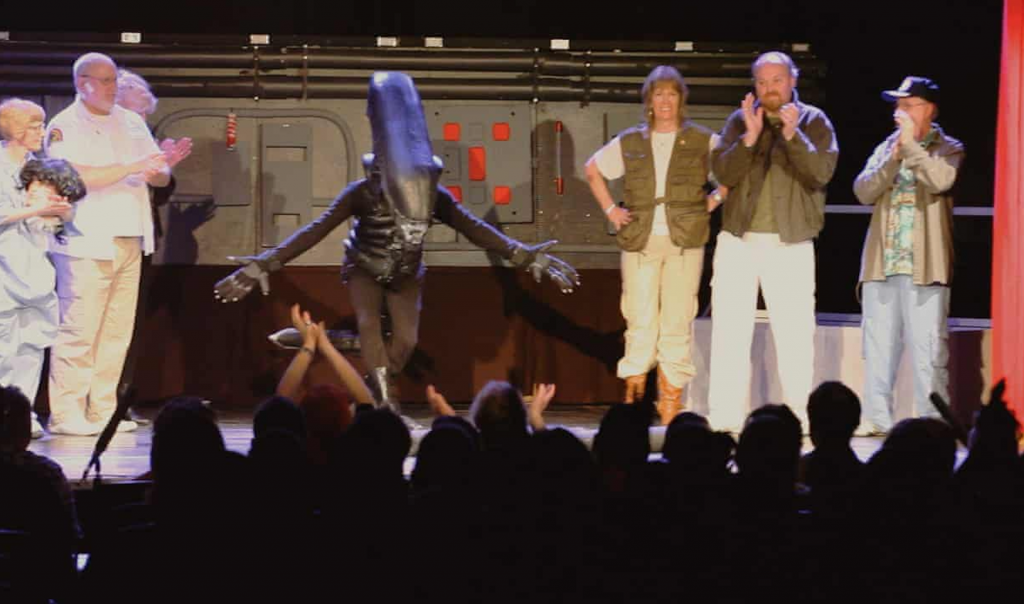 The easiest victory in filmmaking is aiming straight for the heart. And the most direct path to the heart is some form of sincerity. Equally, the best version of in-person art is the same sort of dedication. You know this, from the best experience you’ve ever had with a high school talent show or a community theatre production of Jesus Christ Superstar.

With that in mind, Alien on Stage aims for a kill shot for anyone who has ever taken the stage from a place of sincerity over talent.

This documentary follows a small town in England and their yearly pantomime. What is standard in the country as a silly, cultural musical that take low-punches as something from popular culture, three generations of a family and their friends decide to stage a completely straight, dry production of 1979’s film Alien. But on stage.

Almost all of the cast works full-time as bus drivers in the U.K. and like… sure. Like much of the film, you can’t tell what backing is about to show up next. It’s truly just a group of folks, many of whom don’t even like the sci-fi of the movie at the center of this, who are just opting to perform a movie on stage for strangers. And a former military commander, also with no artistic back but a hard-core structural leadership position, directs it.

We can cut through the normal chaff here of explaining why and how a small-town production of an adaptation of a beloved film is gonna strike your heartstrings. As my wife said halfway through, this movie is Waiting for Guffman, if the ridiculous dreams of that play’s participants actually came true. After a single production of their weird staging of Alien for only 20 people, they wind-up being transplanted for a follow-up performance at one of London’s best venues.

Also, an old man builds some of the best sets you’ve ever seen.

That’s about all you need. Either you’re sold or you’re not.

This is a helluva good time that will re-affirm your love of the arts, in a time when you’re maybe out of faith in performing arts because they’ve been gone for too long. This is just a solidified hit of dopamine for the creative arts. And for, you know, Alien.