Swooning for Freshwater 2.0, a successful experiment in fine dining for working-class millennials 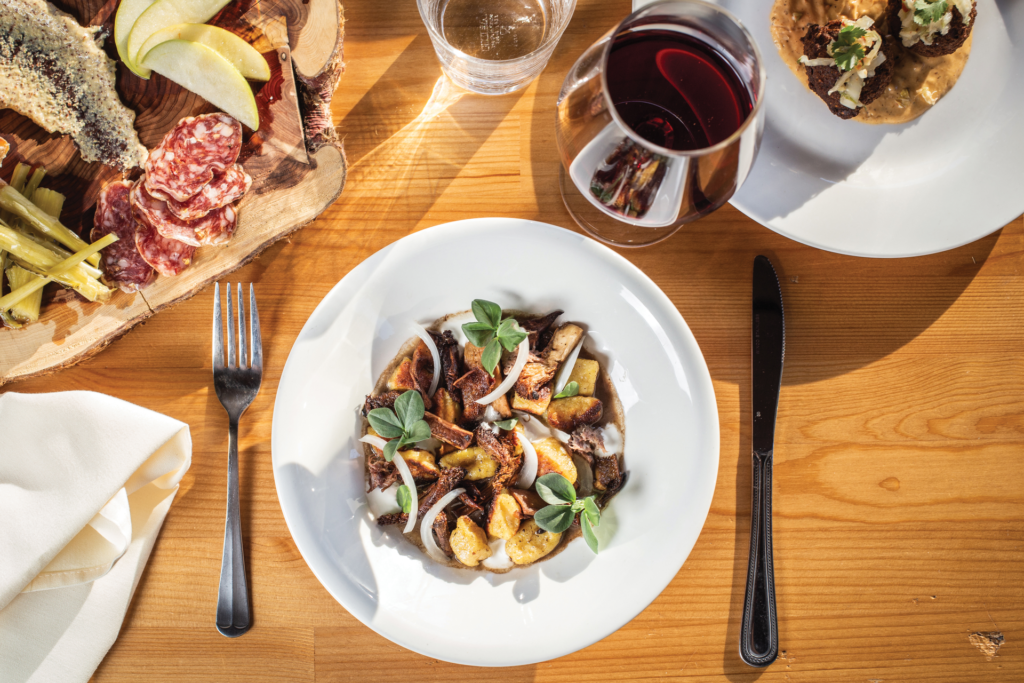 I wish I could tell you what to order at Freshwater. If I could, I would guide you to the striped bass sashimi, a tender valentine to Midwestern fish with the delicacy and depth of a slice of cold French butter. I would tell you to linger over a perfumed nameko mushroom and caramelized onion dip, to let its nostalgic flavors transport you to a wood-paneled basement where chain-smoking grandmothers play bridge and spoon chip dip from their wedding crockery. I’d certainly urge you toward a humble-sounding pumpkin and apple soup, a vegan dish that slyly conjures both the lip-coating stickiness of gelatin and the glossiness of a perfect runny egg.

Odds are, though, none of those dishes will be on the menu by the time you read this review. Chef-owner Calvin Davis has built a Midtown restaurant that feels, in some ways, critic-proof. The menu changes just about every day, depending on what’s available and in season. I ate at Freshwater three times in the span of one week and saw a spate of new dishes each visit. Finding a dish you love here is like a romantic encounter with a stranger on vacation — exciting, ephemeral, bittersweet.

Freshwater’s opening, in April 2017, was a little of all three. The restaurant quickly earned praise for its seasonal approach and inexpensive tasting menu. But two months after it opened, a drunk driver crashed into the restaurant and demolished the southern dining room. A more superstitious man than Davis might have taken it as an omen. A less superstitious man might have recognized the long road to recovery and taken his business elsewhere. The space was challenging even before the accident. Freshwater is part of a commercial island along a notoriously difficult business stretch of Southwest Trafficway. Street noise is prevalent; parking and foot traffic less so. It would have been easy to relocate.

Davis stayed put. This May, the restaurant reopened after almost a year of renovation and repair. The result is a stronger, more focused restaurant that I hope will be a neighborhood fixture.

The personalities here are part of the draw. It’s been a long time since I’ve been in a kitchen that felt so relaxed, even during the weekend dinner rush. No one here seems bitter or burnt out, which may have something to do with the average age of the back-of-house staff. Davis is barely 29; his sous chef, Taylor Hindman, is 22. And while the menu is broad enough to appeal to diners of all ages, the price point and ambience beckon a younger crowd.

A ten-course tasting menu here costs $55 — an extra $25 adds wine pairings. The courses are small and elegant (you’ll leave full but not uncomfortable), and the wine pairings I sampled included five half-glasses of eclectic, largely Old World wines and a nightcap of raisin-y port. 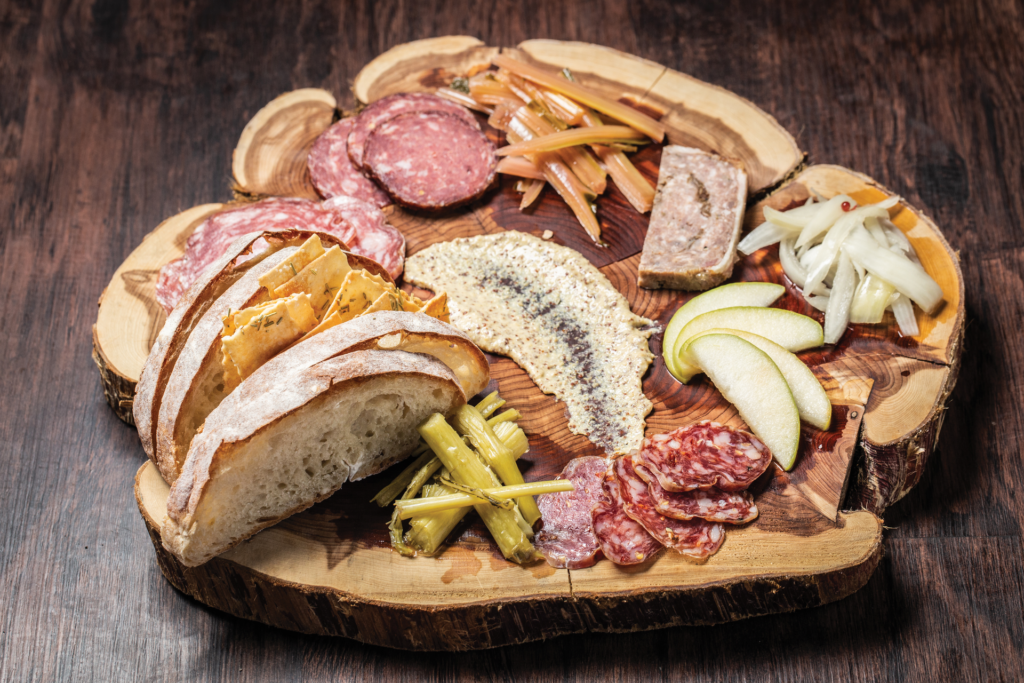 Highlights from my tasting included a charcuterie board laden with bold Calabrese sausage, wafer-thin slices of smoked pork brisket, barleywine salumi, and pickled chard and beet stems. That board was followed by the exceptional striped bass sashimi, plated with an astringent slice of black radish and polka dots of sticky bourbon barrel soy sauce. A horseradish and bok choy purée stood in for wasabi, offering a subtler, more vegetal burn.

Courses proceeded sensibly, alternating between cold and hot, clean and rich. The sashimi was followed by a crawfish hushpuppy with a crisp, light exterior and a soft but structured crumb. The interior was striated with Napa slaw, which kept the ‘puppy moist but not gummy, and a moat of tangy red pepper aioli ticked off many of the same boxes as a Cajun remoulade. 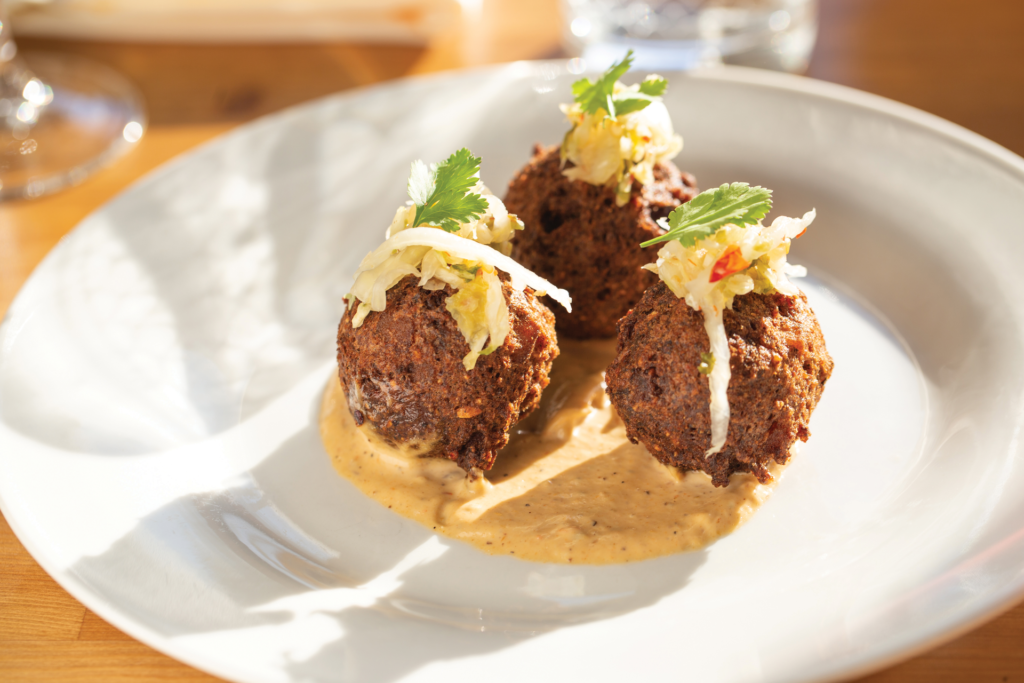 With 24 hours notice, the restaurant will design a tasting menu to meet any dietary restrictions. When I saw Davis on a recent visit, I mentioned that a couple of my vegan friends were grateful to have an option for a nice night out. “It’s just hospitality,” he said, adding that no one should have to feel like their tastes or values were an inconvenience.

Freshwater might be the living antidote to that tired joke structure meant to denigrate anyone doing more than the moral minimum (How do you know if someone’s vegan? They’ll tell you). Everything on the menu here is seasonal and local and sustainably sourced and no one is the least bit smug about it. The servers don’t seem interested in parading the pedigree of the duck or the provenance of the (locally foraged) mushrooms. If you want to know from which murky Midwestern lake your crisp-skinned piece of walleye emerged, you’ll have to ask.

The cocktails here have perhaps the longest shelf life. I didn’t love the “Party @ Margot’s,” a rum- and pear-forward cocktail that tasted harsh and oversweet. Better was the literally named “Sour Grapes.” Fermented grapes and citric acid were softened by a politely frothed egg white, yielding a tart but not puckery drink with a mild flavor despite the navy-strength gin. 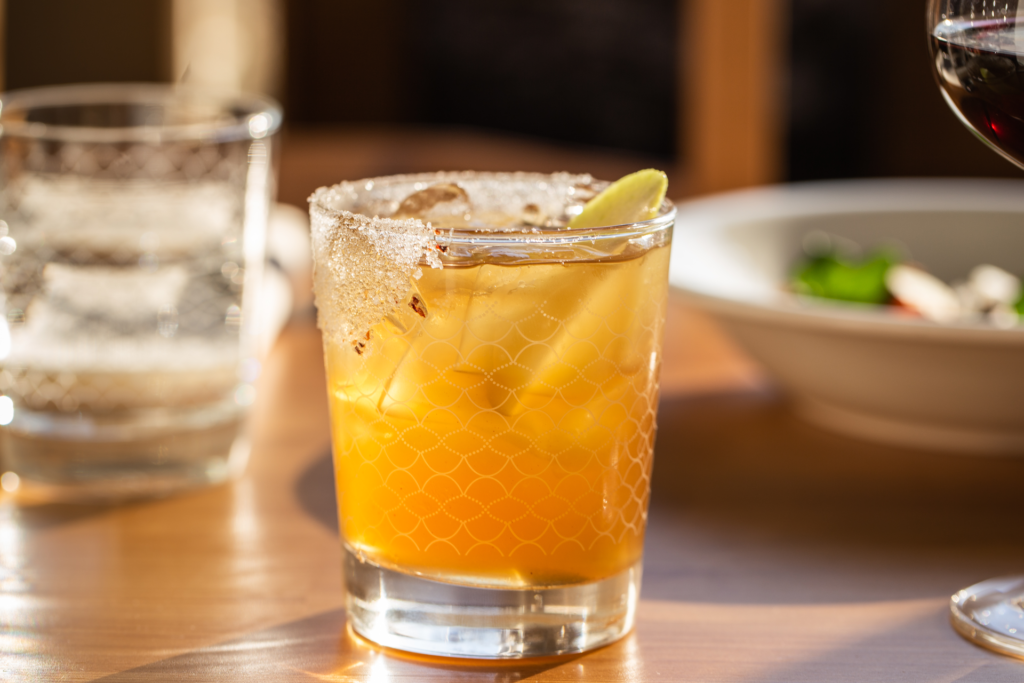 But my favorite was “The Rockefeller,” a bourbon-based invention courtesy of bartender Marlon Kayhill (Marlon’s a hospitality pro; if he’s working, consider dining at the bar). A ghost-chili salt rim sounded like a novelty but shrewdly amplified the drink’s wintry warming spices while challenging its sweetness.

Reviewing Freshwater in the winter seems almost unsporting. The blonde wood and minimalist floral decorations seem built to be bathed in gauzy summer light (in the winter, the main dining room can seem dim and sedate). And any restaurant that restricts itself to seasonal produce is necessarily working with a limited palette come January.

But Davis and Hindman don’t seem to have run out of ideas. On a recent visit, I cooed over deep pink rosettes of smoked steelhead trout coiled alongside a spoonful of roe and a smattering of chubby pickled shallots. A beet crème fraiche added visual interest to the plate, though I could have done without its discordant earthiness. 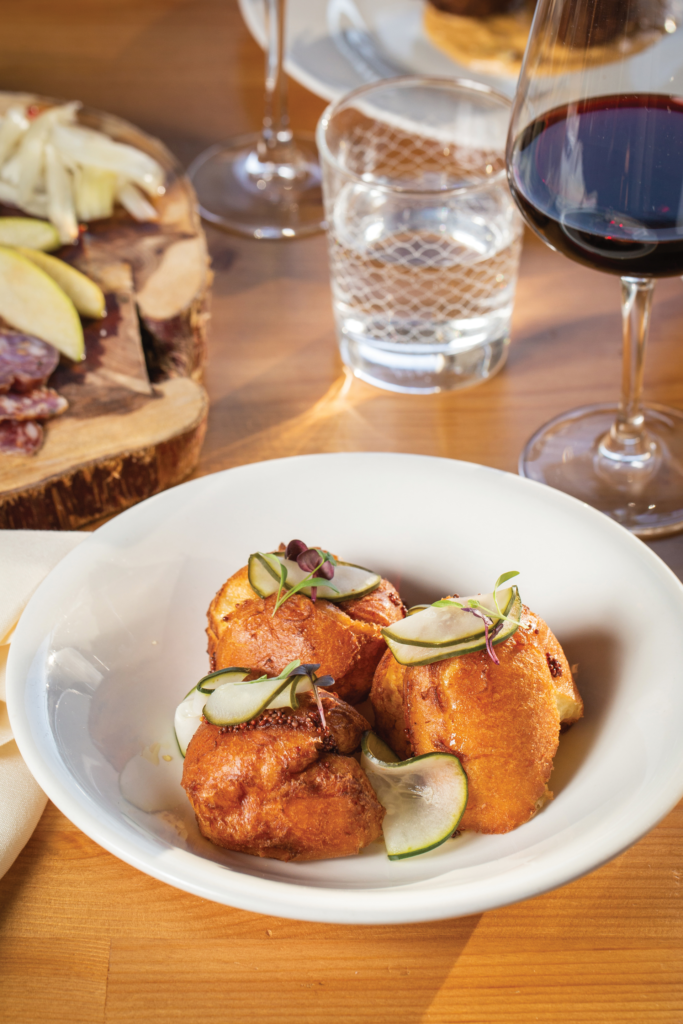 I was even more impressed by a plate of golden beignets stuffed with soft and savory Braunschweiger. Although the beignets arrived room temperature, they were perfectly conceived. Each sultry beignet was dressed with abrasive shavings of pickled carrot and jalapeno and tacked to the plate with a creamy mustard sauce that added piquancy to the rich filling without overpowering it. The result was a surprisingly fresh and light-tasting beignet, a welcome contradiction in terms.

Perhaps because of the restaurant’s lean-times ingenuity, I wanted to love the “winter vegetable garden,” a showcase of everything left after the umpteenth frost. The plate was visually pleasing: knobby wedges of confit sunchoke, a silky smear of turnip puree, and an “alium dashi” made from the scraps. But the delicata squash was unpleasantly crunchy, and the components never quite gelled into something greater than their sum. Other missteps were equally mild. The texture of a flavorful pork rillette skewed chalky instead of creamy, and the promised gouda was too subtle to be detectable.

Although Freshwater doesn’t have a pastry chef, Davis and Hindman still manage to turn out inventive desserts. These, too, change regularly, although you can expect variations on a theme. On one visit, I sampled a silky milk chocolate mousse swirled with sticky bourbon caramel; by my next visit, those ingredients had been transformed into a firm slice of “milk chocolate paté.”

The most satisfying dessert I tried was Davis’s knafeh, a nest of thick, noodle-y pastry that married the candied nuttiness of baklava with the texture of a county fair funnel cake. A sidecar dollop of ricotta and duck egg yolk ice cream had an almost bubblegum-like fruitiness, stunning enough that I could forgive the ice cream’s slight graininess. 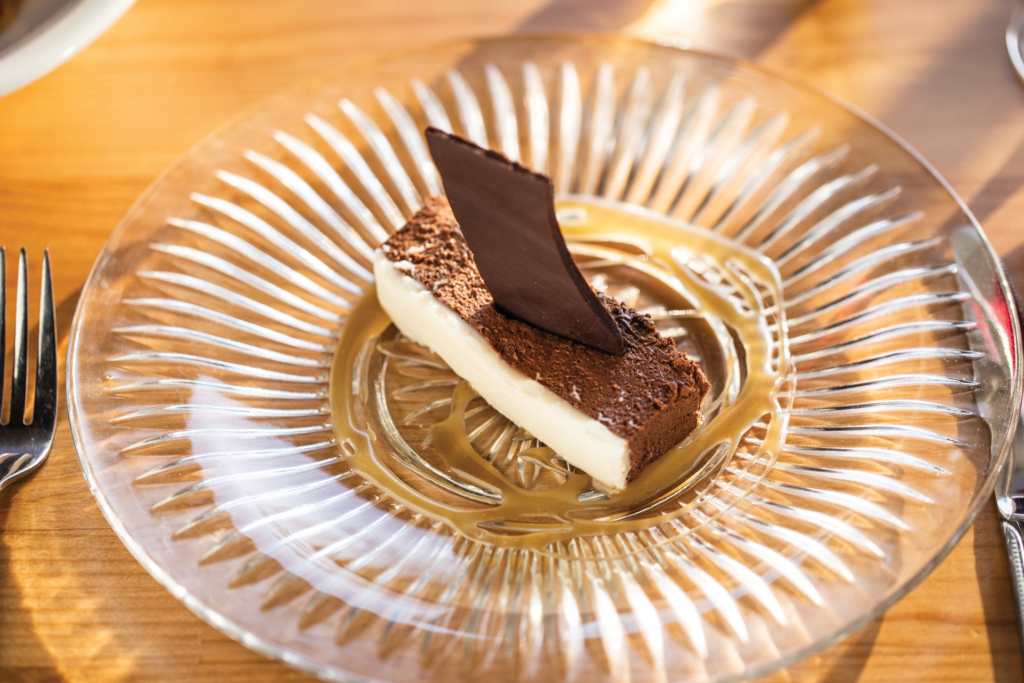 Freshwater may be my favorite (re)opening of the year, but I’ll make a “your mileage may vary” disclaimer: the dining room is clean and cozy, but it ain’t luxe. I can imagine some fine dining veterans being deterred by the spindly — if I’m feeling cranky, uncomfortable — wooden chairs and bar stools. Ditto the chocolate-brown dropped ceiling tiles that evoke a 1970s travel agency, or the gusts of cold wind that billow around window-adjacent tables whenever someone walks through the front door (fortunately, this is an infrequent intrusion; most diners enter the restaurant from the rear parking lot).

I can also imagine some well-heeled expense accounters with permanently affixed cardigans complaining about the informal staff, with their visible tattoos and piercings and their ironic George Michael playlists and their failure to announce each course in the reverent tones of a golf announcer. Service here is always warm, but it isn’t obsequious. For me, that’s a feature. For others, it may be a bug.

I don’t generally like making a fuss about people’s ages, but it’s hard not to see both the restaurant’s informality and focus on sustainability as hallmarks of a younger generation of chefs. With Freshwater, Davis has found a way to unite two adjectives that seem irreconcilable: exciting and accessible.

On my way out of the restaurant (through the front door, to the scowls of a nearby table), a friend proclaimed it “the working man’s fine dining.” I’d narrow that (and gender-neutralize it) to “the working millennial’s.” Hey, we may not be able to retire until we’re cyborg octogenarians choking down the ash of a fossil-fuel scorched earth. But until then, at least we can afford a good meal.