In Sweat at the Unicorn, Rust Belt anxiety amid the 2000s collapse of American manufacturing 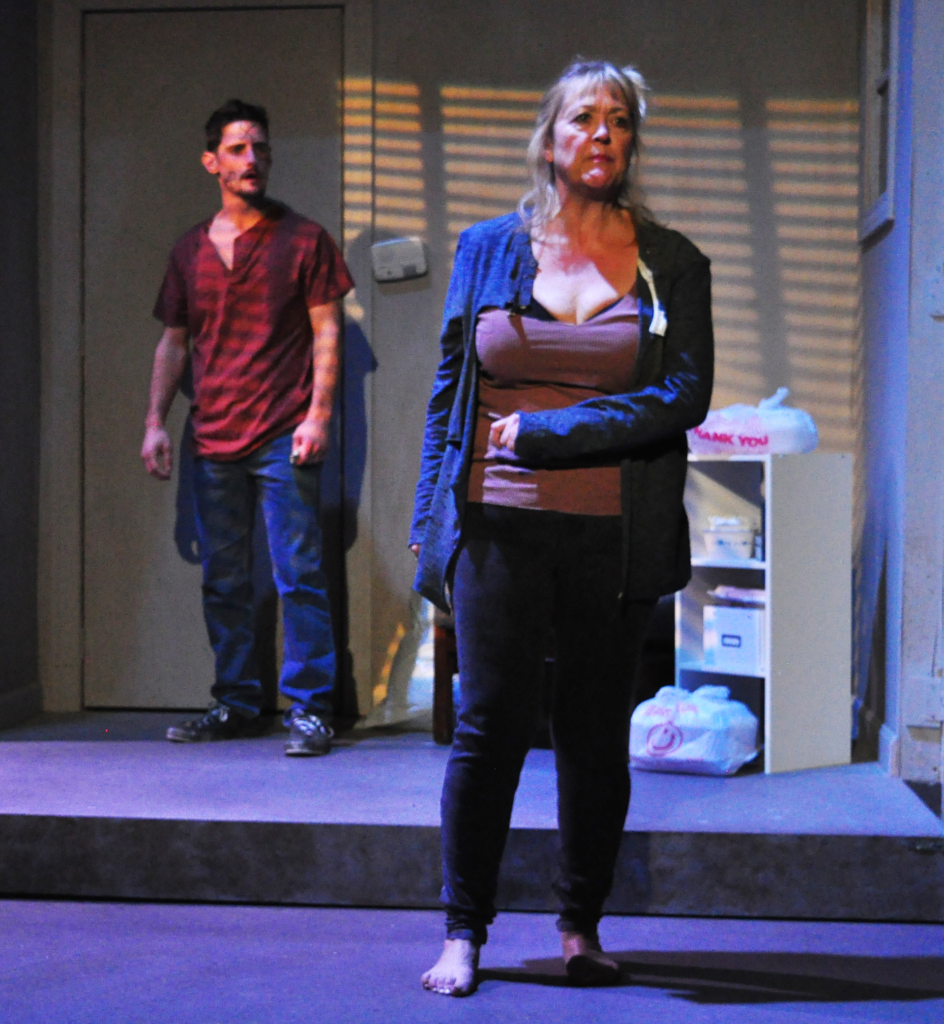 If you were to distill some of the most powerful forces behind the 2016 election — the death of manufacturing, the systematic dismantling of union power, the pivot to immigrant scapegoats, the twinned rise of legitimate economic anxiety and garden-variety racism — and pack them into a single play, you might end up with something a little like Sweat by Lynn Nottage, now playing on the Unicorn Theatre’s Levin Stage.

Nottage’s script, which won the 2017 Pulitzer Prize for Drama, traces national political feuds to their local origins. The bulk of the play takes place in a townie bar in Reading, Pennsylvania, where workers from Olstead’s steel mill meet to unwind and brush the dust off their shoes at the end of a long day (the lived-in set, by Gene Friedman, is so realistic that I wanted to slide onto a barstool myself).

At the start of the play, the workers are optimistic. A cushy management position has just opened up at Olstead’s, and lifelong employees and friends Tracey (Jan Rogge), Cynthia (Cecilia Ananya), and Jessie (Vanessa A. Davis) are convinced it’ll go to one of them.

But when Cynthia is promoted, the camaraderie curdles. Tracey not-so-subtly suggests that Cynthia (who’s black) was an affirmative action hire. Jessie’s too soused to play a reliable peacemaker (Davis has a note-perfect read on slurred speech and loose limbs — harder than it looks). And the bartender, Stan (Greg Butell) doesn’t know how to cut the women off in any meaningful sense. 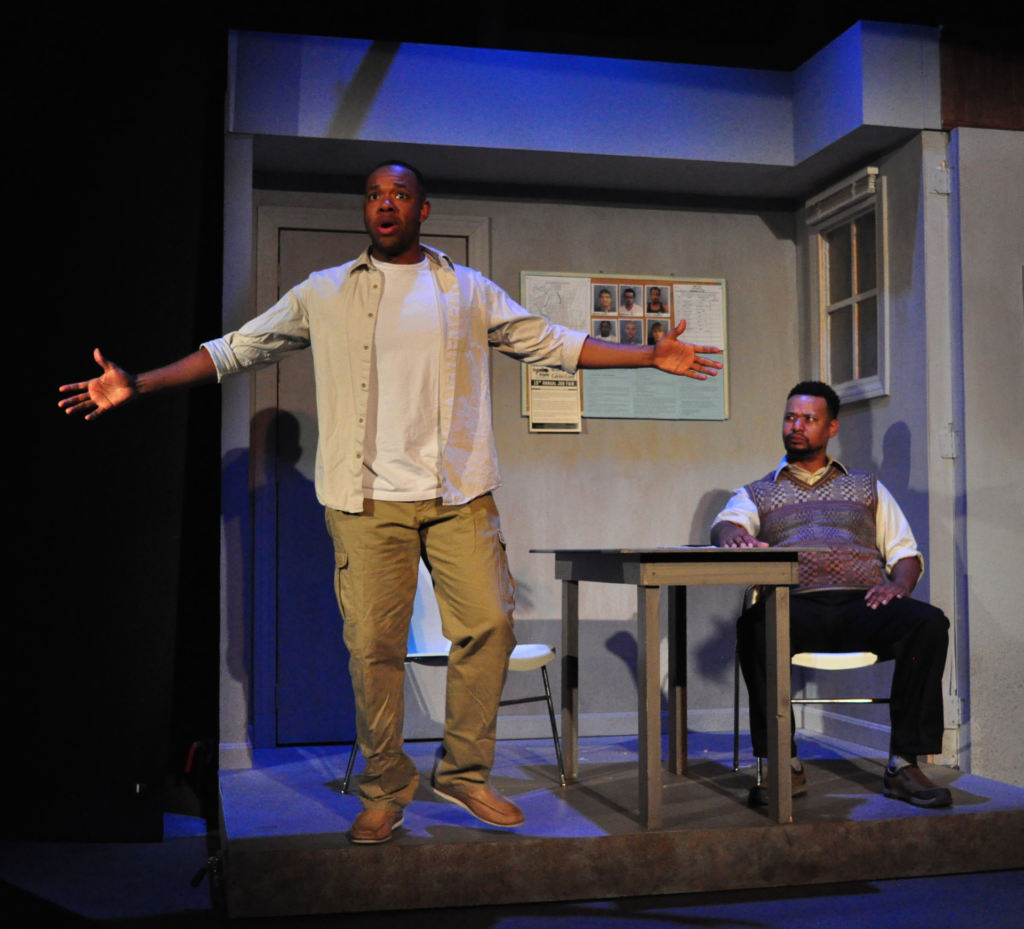 At the same time, a new generation of workers is preparing to follow in their parents’ footsteps. Both Tracey’s son, Jason (Matthew J. Lindblom), and Cynthia’s son, Chris (Teddy Trice), have big dreams for their careers at Olstead’s — pensions, early retirement, a condo in Myrtle Beach. But when Olstead’s forces a contract renegotiation and locks out the union workers, those dreams dry up.

Sweat jumps back and forth between two critical time periods — 2001 (just before 9/11) and 2008 (just before the collapse of Lehman Brothers). Without giving too much away, it’s safe to say that those intervening years weren’t kind to the manufacturing industry. As financial conditions worsen, the friendship between Chris (who’s black) and Jason (who’s white) fractures along somewhat predictable lines.

I’ve always been impressed by Lindblom’s commitment as an actor, but as Jason, he also demonstrates preternatural control. Rogge likewise exceeds already high expectations in her portrayal of Tracey; she burns with laser-focused conviction. While both Tracey and Jason do and say terrible things over the course of the play, neither actor loses their grip on empathy or stoops to patronizing mustache-twirling.

Still, there’s something to admire in every performance. Justin Barron makes an outsized contribution in a small role as Oscar, a Colombian barback who crosses the picket line to pursue a higher wage. And Butell makes a series of aphorisms sound natural as Stan. 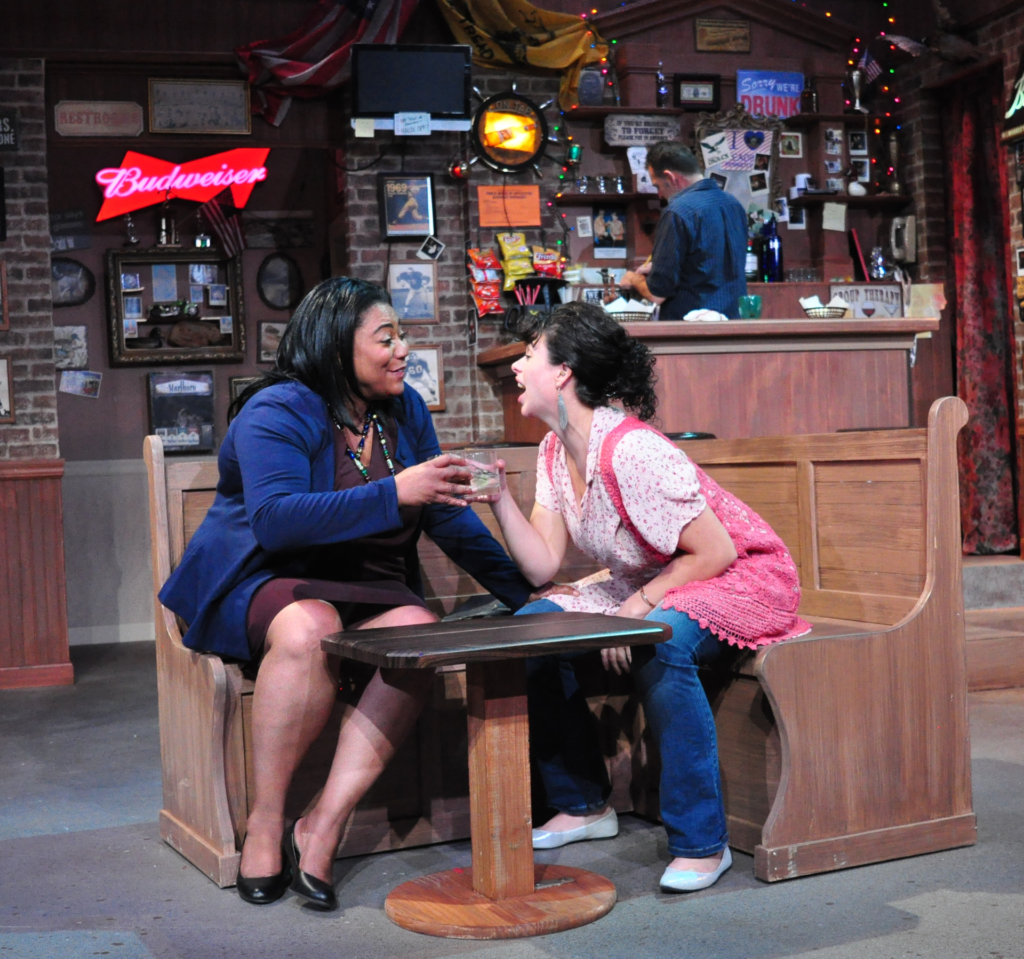 Stan is, in some ways, the prototypical fictional bartender, doling out wisdom and synthesizing the play’s themes at every turn. (“Nostalgia is a disease,” he says at one point. Also: “We’re meant to pick up and go when the well runs dry.”) But through Stan, Nottage also offers a realistic representation of the fatalistic attitude some Rust Belt workers adopted in response to their dwindling economic prospects (and dwindling position in the social hierarchy). “I decided a month ago that I’m not voting,” Stan says late in the play. “Cuz no matter what lever I pull, it will lead to disappointment.”

The script covers a lot of sociopolitical ground, but never feels plodding or didactic. Nottage is one of a few playwrights working today who knows when to quit writing. Every scene splinters at its high point, leaving no room to deflate tension or lose momentum from one scene to the next. At times, she might end a scene too early. But she never ends one too late.

She also knows how to close a play. Although the tension builds to a shocking act of violence, Sweat ends on a note that feels neither pessimistic nor naïve. The result is a thoroughly engrossing, nuanced look at how we got here — and what we sacrificed along the way.

Through November 11 at the Unicorn Theatre, Levin Stage