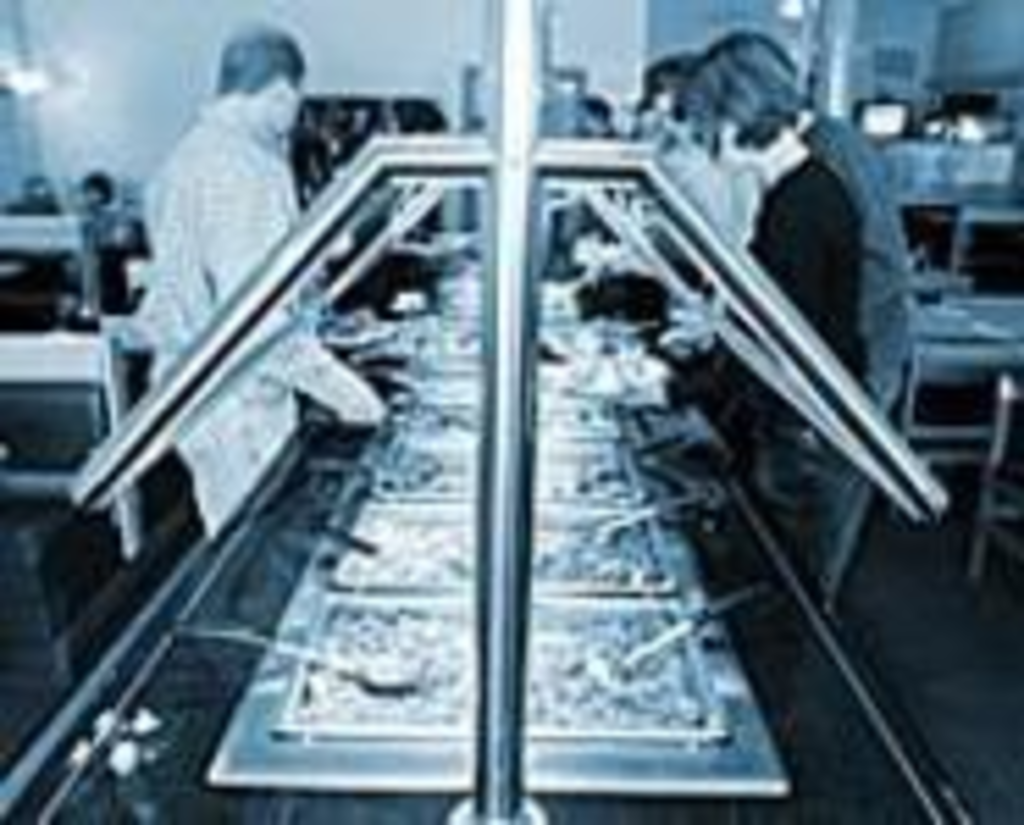 But bigger isn’t always better. Sun’s — which also has a lengthy menu of Korean dishes, traditional Szechuan and Cantonese dishes, and such Chinese-American fare as chow mein and chop suey — is a distinct little treasure. Located in the space once occupied by the Blue Nile Ethiopian Restaurant, Sun’s has considerably brightened up the dining room with mirrors, whirling fans, and vinyl upholstery in the same bright blue of a Ming Dynasty vase. It’s not fancy, by any means. There’s almost nothing in the way of decor, besides two gift-shop-style gilt fans tacked to a wall. The Formica tabletops are barren, the napkins are paper, and beverages are served in big plastic tumblers.

But to appropriate a lyric from the musical Flower Drum Song, “there’s something about the place.” Its upbeat, positive energy comes not from the music on the sound system (permanently tuned to a local radio station playing one too many irritating Phil Collins songs from the ’80s) but from the building’s spirit. The brick LaBelle Building was built after World War I and was always occupied by a number of small retail shops, including — for nearly half a century — a dry-goods store inside the space where Sun’s now serves egg drop soup and a spicy plate of batter-fried Princess Shrimp. The first dry-goods retailer to set up shop was named Edward Frankenstein; thus, the restaurant is located in the house of Frankenstein. The only monsters I saw, thankfully, were from the comfort of my window seat: a couple of scary-looking, toothless barflies passing by the restaurant’s plateglass windows on their way to one of the neighborhood saloons. One grinned, then waved at me, abruptly jolting me out of my reverie as I rudely stared at him, blankly, as if he were an actor on a giant TV screen.

“These window booths are the best thing in the restaurant,” said my friend Bob. “You can watch the whole world pass by.” He was working on a salad he’d constructed at the pint-size salad bar, which is tucked around the corner from the steam table (a big hand-printed sign directs patrons to it). It’s near a little TV set — the real kind — which is always turned on, but silently, to a game show.

On that visit, Bob had chosen to try the buffet and I had ordered one of the Korean specialties from the menu. The lanky waiter had advised me that the dinner buffet included only one Korean dish, bul go gi (the thinly sliced, bite-size char-grilled beef that’s sometimes called “bulgogi”). Served with onions, the steam-table version was rather bland, absent the traditional piquant sauce of garlic and chilies. The dinner menu, however, has 21 Korean specialties, including boneless, barbecued beef short ribs marinated in garlic, ginger, and soy — a culinary relic of Korea’s Mongol occupation. It’s also the most expensive entree on the menu.

After I took my server’s suggestion and ordered a plate of jap chae (shredded pork with vegetables and noodles), he hurried out with a little dish of sliced cucumbers marinated in salt, ginger, and hot chilies. I gobbled them down and reached over and swiped one of the hot, crunchy crab rangoon appetizers from Bob’s buffet plate, which he had loaded with all of the oddball things he likes best: egg rolls, bites of batter-fried chicken swathed in a syrup of orange-colored sweet-and-sour sauce, and those little puffs of yeasty pastry fried in oil and dusted with granulated sugar. The junk food of the steam table.

My own dinner came out in a flash. The plate was piled high with sautéed pork, a dull-looking array of vegetables, and a squirmy mass of gelatinous cellophane noodles, the color and consistency of earthworms (“Tapeworms, actually,” Bob said nonchalantly). It was an interesting contrast of textures — the crunchy vegetables, the rubbery noodles, the hot bits of soft pork — but strangely flavorless. I’d never order it again.

I was much happier on a second visit. Steaming bowls of fragrant, garlicky Korean dumpling soup and noodle soup quickly warmed up a fiercely cold night, especially when we paired them with a little dish of that fiery pickled cabbage known as kim chee. It’s a delicacy that manages to adhere to the health-promoting Oriental five-flavor rule, with salty, sweet, hot, sour, and bitter tastes all at once. Kim chee isn’t on the menu, though; you have to ask for it.

On this visit, I decided to tackle the buffet myself. I ignored the little salad bar and the two soups on the buffet (a vinegary hot-and-sour and an egg-drop affair with loads of cornstarch) and heaped up my plate with all the usual suspects. Deep-fried General Tso’s chicken swam in a sticky, caramel-colored sauce, and the steamed dumplings were lukewarm and tasteless; there was also an inexplicable vat of greasy fried potato slices. But the crab rangoon and egg rolls tasted fresh and hot, the Yu-Sung Chicken sauce was peppery and spicy, and mounds of fat lo mein noodles complemented the pink shrimp sautéed with cabbage, broccoli, and baby corn.

There were some unexpected wonders on the buffet line too, including soft cubes of tofu sautéed with ginger and chilies, and slices of a rice-and-seaweed vegetarian sushi roll. I kept filling up my white china plate. A server whisked it away as soon as it was empty and didn’t bat an eyelash when I greedily hurried over to fill up yet another one.

For dessert there was a platter of hot glazed bananas, sliced and coated with a thick, shiny melted sugar that burned the tongue. And yes, the bill came with a cellophane-wrapped fortune cookie. Cracking it open, I pulled out the slip of white paper hoping to read something profound and revealing.

“Smile,” it read, “and the world smiles with you.” It sounded vaguely familiar. Was this an ancient Chinese saying, a Korean aphorism, or a Hallmark card?