The buzzy drama shows Hall is a force to be reckoned with. 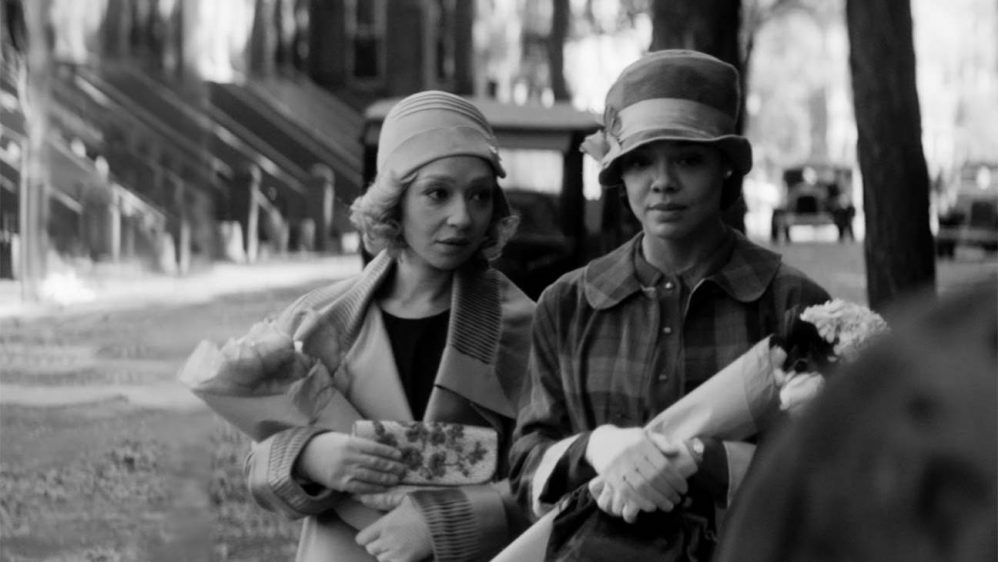 Sundance 2021 has had plenty of buzzy premieres, but perhaps none have been as highly anticipated as Rebecca Hall’s directorial debut, Passing. This refined—if subdued—adaptation of Nella Larsen’s 1929 novella stars Tessa Thompson and Ruth Negga as two white-passing Black women in the 1920s. Their fraught friendship gives rise to a film seething with subtle examinations of race, class, sexuality, and colorism, set against an embellished tableau of New York City.

Passing opens as Irene (Thompson) ventures into a white-owned toy store in hopes of purchasing a birthday gift for her son. She obscures half her face under a sun hat, and hurries out of the store as soon as the package is in her hands. Irene rarely risks her safety in an attempt to pass for white, and she doesn’t have any desire to do so. She’s made a life with a suave Black doctor, Brian (André Holland, always great), raising their two boys in a picturesque Harlem brownstone.

Still, the toy store excursion rattles Irene, and she ducks into a posh nearby hotel for a reprieve, only to reconnect with Clare (Negga), a woman much changed from the friend she knew in her teens. The bubbly woman is now Hitchcockian blonde, and has fully disavowed her upbringing to live as a white woman. It’s a tenuous arrangement, particularly given that Clare is married to a violently racist white man named John (Alexander Skarsgård), who openly states his hatred for Black people and affectionately teases his wife for her tanned skin. Cinematographer Eduard Grau shoots the entire film in blurred, period-appropriate black and white, casting both the leads and the sculptural, geometric sets they occupy in an arbitrary, ambiguous light.

But Clare is deeply affected by her brush with Irene, and as time draws on, she soon becomes more and more entangled in her old friend’s life and social circle. It’s a quietly charged dynamic, and watching Thompson and Negga thread that line between resentment and obsession is a career highlight for them both.

Thompson adopts an almost Katherine Hepburn-esque effect as the more restrained Irene, who finds her carefully constructed life unsettled by Clare’s ability to freely (if dangerously) flit between her white-passing family life and Harlem’s Black social scene. Her friend’s code-switching throws thornier aspects of Irene’s life into sharp relief—like her passive-aggressive treatment of the family’s Black maid, Zulena (Ashley Ware Jenkins), or the way she bristles when Brian has to discuss lynching and other violent anti-Black acts with their darker-skinned sons.

There’s a decidedly queer element to the women’s tension, too, as Clare strikes up an intimate flirtation with both Irene and Brian alike. In a film full of painterly, static aesthetics very much in line with Irene’s inner conflict, one of the most striking moments is a POV shot at a jazz party, in which Irene’s eyes travel lustfully down Clare’s backless dress. But just as Irene grabs Clare’s hand, she’s stolen away onto the dance floor, leaving the unspoken eroticism between the film’s main players to simmer even more fiercely beneath the surface.

Ultimately, the standout performance of Passing is Negga, who imbues Clare with real pathos and yearning underneath her free-wheeling shell. Hall, who personally comes from a long line of white-passing Black family members, thankfully avoids turning Clare into a tragic mulatto figure—that is, a mixed-race person who becomes depressed or even suicidal after struggling to fit completely into the “white” or “Black” worlds. Negga’s character may be plagued by the possibility of dangerous retribution should her husband find out about her Blackness and borderline emotional affairs, but she also finds great value and freedom by choosing to reconnect with her Harlem roots.

By the time that Passing arrives at its shocking conclusion, it marks an ambitious, stirring feature debut that’s not quite the period masterpiece viewers may have hoped for (although it’s worth noting that my perception of this story is limited to that of a white woman, and Black women critics, in particular, will be able to speak to issues that I cannot). Coupled with surprisingly leisurely pacing and almost still-life imagery, some of Hall’s aesthetic choices make the film’s subtle thematic quandaries just a bit too difficult to access in a more meaningful way. But Hall has still managed to craft a memorably ambitious, impeccably acted debut. And if she’s managed to pull off such a delicate portrait of race and sexuality her first time out of the gate, her directorial prowess could likely bloom into a true force to reckon with in the years to come.