She’s not the first to make a go of the wilderness, and it shows. 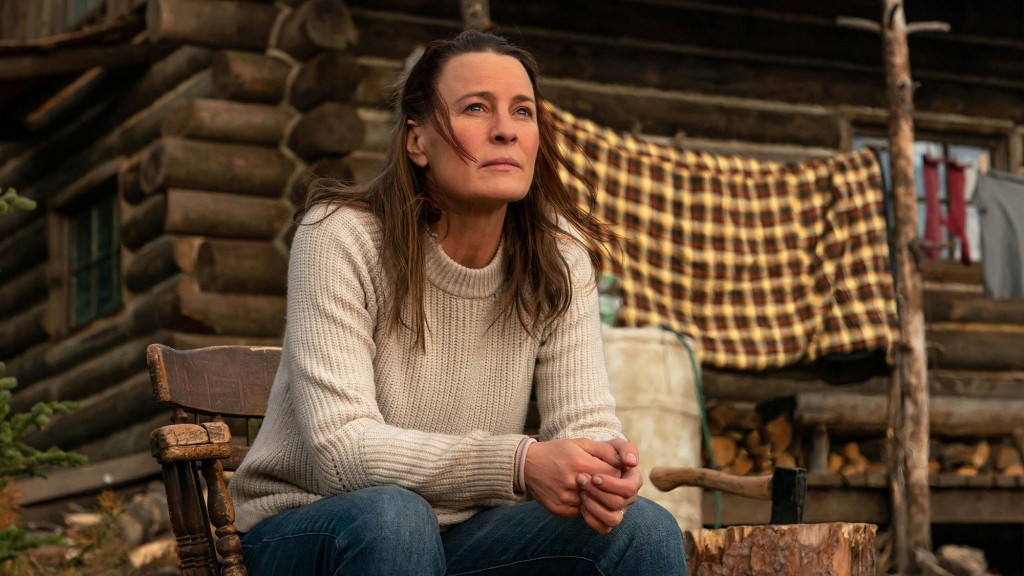 Stories about retreating into nature to seek renewal are nothing new—Henry David Thoreau literally built a legacy on the concept back in the 19th century. More recently, Reese Witherspoon received an Oscar nod for her role in 2014’s Wild, which was as much a tale of backpacking and grief as it was a career showcase for the actress’ acting range. Now Robin Wright is taking a stab at the subgenre with her feature directorial debut, Land. Despite some empathetic performances and some gorgeous nature shots, however, what should be a quietly moving drama about loss and isolation instead comes off as a hollow retread of better work.

Wright stars in the film as Edee, a woman reeling from the harrowing trauma of recently losing her husband and young son. Although her sister (an underused Kim Dickens) has desperately tried to reach out in the midst of Edee’s suicidal ideations, she muses to a therapist that “it’s really difficult to be around people, because they just want me to be better.” The therapist innocently suggests that without other people around, Edee is “alone with her pain,” but the idea of such an arrangement speaks to our protagonist—so much so that she dumps her cell phone in a nearby trashcan and leaves the city for a remote cabin in the Rocky Mountains.

As she winces at using a soiled outhouse and brushing her teeth with baking soda, it’s obvious Edee doesn’t have the best survival skills. Given her imagined glimpses of her lost loved ones and insistence on ditching the human world without proper supplies, there’s also a strong sense she’s not interested in sticking around much longer anyway. Land’s early scenes offer a glimpse of a more stripped-down, authentic character study than the rest of the film, and Wright—who previously directed several House of Cards episodes—has a keen eye for the uncompromising apathy of the natural world.

The sweeping vistas and howling winds that surround Edee are unrelenting in the face of her deeply human problems, even as she becomes prone to muttering melodramatic one-liners like, “If I don’t belong here, I don’t belong anywhere!” Wright does her best with the material she was given, but Jesse Chatham and Erin Dignam’s screenplay gives Edee little depth and few defining characteristics that don’t fall directly into the suffering woman archetypes we’ve seen countless times.

Before long, grueling winter weather descends on the mountain in full force, leaving Edee on the verge of death when she’s discovered by nearby hunter Miguel (Damián Bichir). The man nurses her back to health, and as the wildlife on the mountain begins to come back to life, so does Edee, thanks to the pair’s steadily growing friendship. Miguel seems to enjoy her occasional companionship, and Edee begins taking an interest in the survival skills he teaches her. The only caveat? He’s not allowed to give her any updates about the outside world.

In his handful of scenes, Bichir provides the film with some much-needed charm—who wouldn’t want to spend troubling times leaning on your friend as he recounts his love for Tears for Fears? Still, as Land enters veers into its rushed third act, Edee and Miguel’s dynamic takes on some troubling implications.

While the story beat of a good Samaritan coming to the aid of their fellow human being is classic for a reason, Miguel appearing to help a wealthy white woman in her darkest hour and having little interiority of his own reads as a race-bent variation on the “Magical N*gro” trope. And when he’s revealed to be terminally ill just as Edee begins to flourish again, his entire livelihood becomes tied to her own growth in a manner that’s grossly disingenuous. Bichir and Wright have genuinely warm, likeable chemistry, but it’s not enough to help the story rise above the mediocre sum of its parts.

There’s a point about halfway through Land where a distraught Edee breaks down and repeatedly shrieks, “THIS ISN’T WORKING!” And no matter how good Wright and co’s intentions for this film may be, you can’t help but agree with her observation.