The spiraling, complicated comedy screens this weekend in Lawrence. 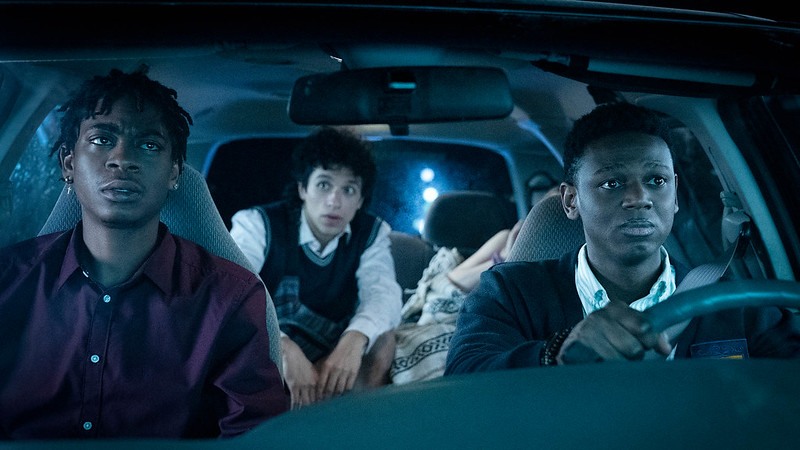 Emergency. // Courtesy of the Sundance Institute

[Editor’s note: Lawrence plays host to a screening satellite program this year for the Sundance Film Festival. For more information, read our story on the announcement and overview. Click here to follow our full coverage.]

Emergency is director Carey Williams’ expansion of his 2018 short film with the same name.

With their consciences and futures on the line, they’re at a crossroads on what to do.

Emergency has thematic similarities to Justin Simien’s Sundance hit Dear White People and the first season of its accompanying Netflix show. Like Simien’s film, Williams’ movie takes place in a mostly white academic setting, and digs into the layered difficulties of being a person of color in a white-dominated space.

Watkins and Cyler are the central buddy-comedy pairing, and they make a good match. Watkins’ straight-laced Kunle worries he’ll let his friend down by telling him about his post-grad acceptance to Princeton. Cyler’s fun-loving Sean is like a college-age version of Shaun of the Dead’s Ed—fully supportive of his buddy while trying to get him to loosen up, to Kunle’s detriment.

Emergency starts to go off the rails when the night takes a sharp turn. As they try to get their unconscious guest to the hospital, Kunle, Sean, and Carlos are haphazardly pursued by the girl’s self-involved sister (Sabrina Carpenter) and her friends (Madison Thompson and Diego Abraham). What starts as a series of comic setpieces devolves as the characters make boldly dumb decisions that increasingly defy common sense. A dramatic confrontation abruptly changes the genre from buddy comedy to an issues movie.

Ultimately, Emergency’s ensemble is charming enough to pull the whole enterprise together, and get you invested in the characters. What it does have to say about the interactions between white people, people of color, and the cops, unfortunately adds nothing new.