OK, so what’s the deal with the guy with the boomerang?

That’s not really the first question you figure the makers of a $175 million would-be blockbuster tentpole mean for you to take home with you, yet I found myself walking out of Suicide Squad, wondering just who this fella was. Besides being one of the major characters I’d just spent two hours with.

I mean, if you’re going to bother giving a superhero-type guy a silly power, at least give him one scene that showcases what a badass he can be, given the (probably very specific) opportunity. You know, like Hawkeye — the Avenger who’s really good with a bow and arrow. Or at least give him enough screen time for us to give a shit about him — see: the meaningful moments at Hawkeye’s home, with his family, in Avengers: Age of Ultron. Or throw in a couple of winking one-liners that let the audience laugh at the absurdity of a really good archer hanging tough and keeping up with a giant green Hulk.

Sorry, DC, but at this stage in the superhero game, you’re helping to invite the already inevitable comparisons.

Suicide Squad, the third Warner Bros. movie in the increasingly disappointing DC cinematic universe, has a tough time introducing its new characters — seven “metahumans” in need of backstory or at least a little context. This is the studio that just spent untold time and money rehashing Superman’s and Batman’s well-trafficked origin stories across two movies when everyone already knows those myths. This is the studio that’s not hitting its storytelling targets.

Fine, there are flashbacks, narrated by Viola Davis, that attempt to introduce us to the squad. But one poor cast member is so unimportant to the story that he gets no such courtesy. He gets out of a car and someone says, “That’s so and so. He climbs walls fast.”

The other thing he does fast: dies.

Which is hardly a spoiler when we’re talking about a movie that generates no suspense of its own. That we know who is expendable is the most frustrating of several screenplay shortcuts that strand talented actors in a no-win movie.

Take Jared Leto. Playing a new version of the Joker, he’s marooned here, haunted by the ghosts of Jokers past while being limited to ancillary status. He acts crazy and he looks great, but he doesn’t have enough screen time to develop his own persona; the script doesn’t give him an overarching theme or a code to live by.

Say this much for writer-director David Ayer, though: He hasn’t weighed down Suicide Squad with the oppressive atmosphere of Zack Snyder’s humorless predecessors. He’s working with characters who have some built-in comic tendencies, after all. But his screenplay is simply not at the Marvel level, so even the most basic wisecracks fall flat or go missing. After the no-holds-barred parody of Fox’s Deadpool this year, the absence of wit is even more glaring. 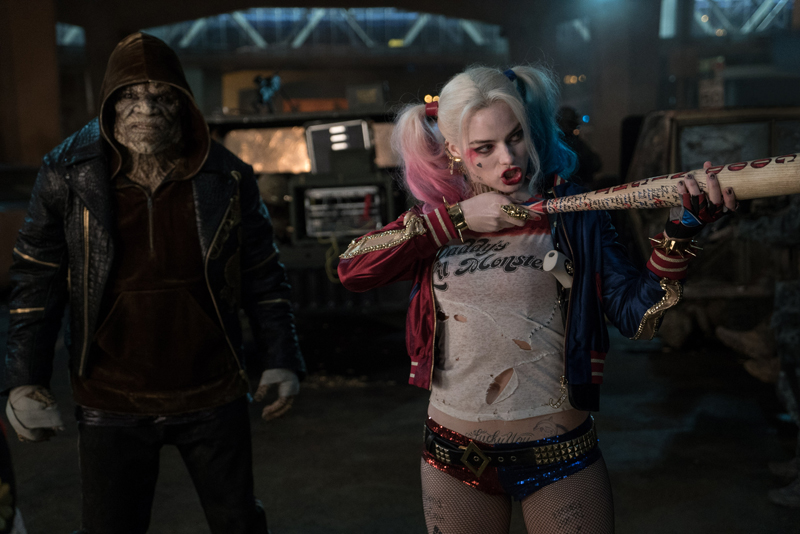 The Joker’s girlfriend — fan-favorite Harley Quinn — has more screen time, and Margot Robbie plays her in devil-may-care mode, with a hint of sadness underneath. Yet she isn’t given dialogue that’s smart enough to back up what we know of Quinn. Deadshot — a hitman played by Will Smith as basically Will Smith with an ensemble-cast scowl — fares better in that department. (I wonder if he had his own script doctor on call.) Jay Hernandez plays firestarter El Diablo, the most human character — at least until he explains his one defining character trait, and then explains it again. And again.

Ayer doesn’t have the same fetish for violence that Snyder does, or his obsession with slow motion — except during the climactic scene, when the technique backfires, prolonging a moment that already carries zero dramatic weight. This in a movie that centers its action on a standard military-style siege, complete with faceless, expendable soldiers who are armed with machine guns. It’s closer to the final Hunger Games movie than to an Avengers. The film’s trailer was edited to suggest the presence of some distinctive, Baz Luhrmann-style visuals, but Ayer works mostly without flourish. A couple of mind-bending Joker flashes aren’t enough to excuse a lame magic-lightning show that’s straight out of Ghostbusters.

Like the misfits of Guardians of the Galaxy, the Suicide Squad are anti-heroes who eventually learn to care about someone other than themselves. Unlike Guardians, this movie doesn’t make such a development convincing, so it never jells. In Guardians and Avengers both, when the team finally comes together, it’s big. Cinematic. Triumphant. That same moment in Suicide Squad feels more like the Ben Stiller-led Mystery Men.

DC’s risks aren’t paying off. Christopher Nolan’s Batman universe — as close to realistic crime capers as we’ll ever see from superhero movies — now seems impossibly distant. Snyder and Ayer are leading the push toward a CGI-heavy universe full of gods and monsters, but Marvel and the X-Men have held that ground for years. Suicide Squad makes DC’s lag in this arms race even more obvious.

A silly post-credits sequence is the final nail in the coffin, reminding us that Marvel has better vision, foresight and characters. If any serialized universe is equipped to survive superhero fatigue, it’s not the one from which Suicide Squad tentatively peeks out.

But wait, the credits: That guy with the boomerang was actually called … Captain Boomerang?