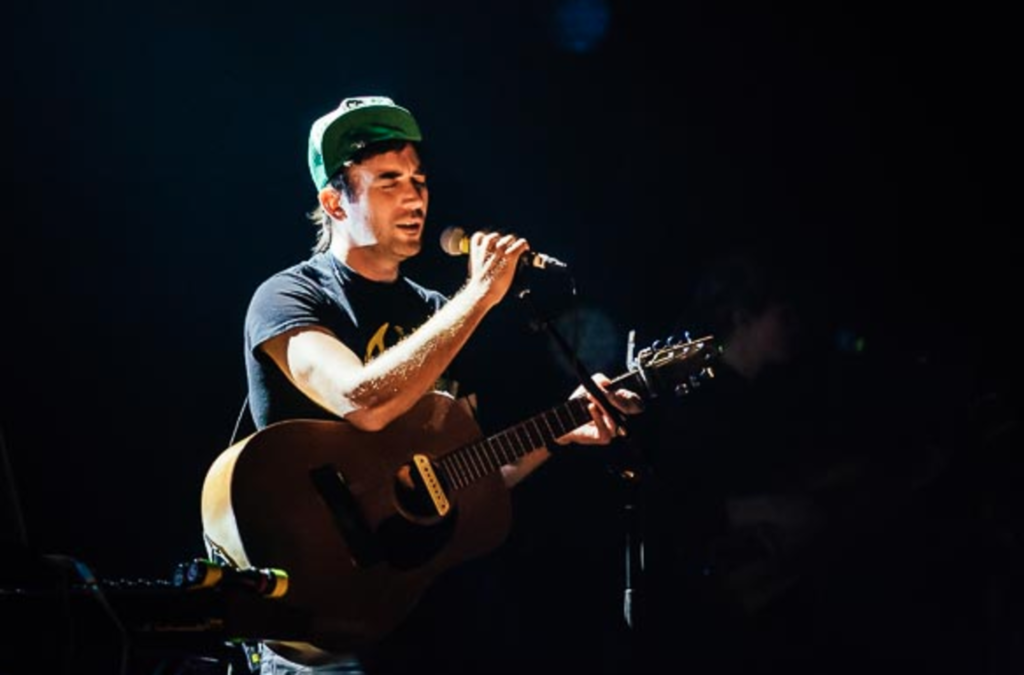 It was over an hour into his concert at the Midland last night before Sufjan Stevens at last addressed his audience directly.

“I’ve been thinking about occupation, and how we occupy our time,” Stevens told the audience. “I went to the [National] World War I Museum here, and it was incredible, to see all the bloodshed in the name of ideology and the occupation of death.” 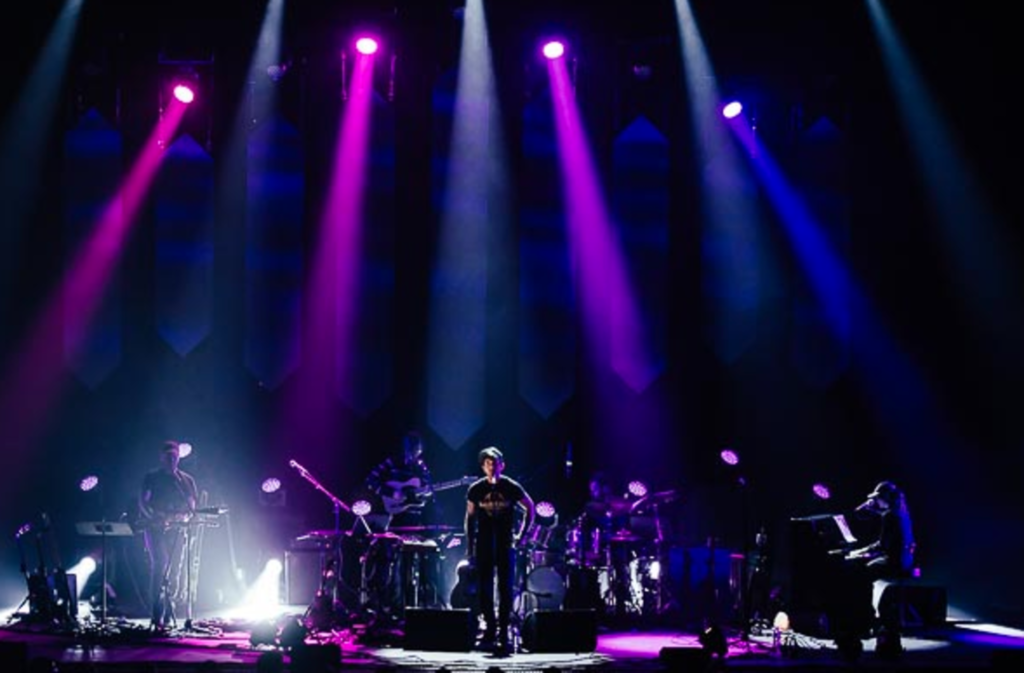 A bleak subject to contemplate, but Stevens – who had so far spent the evening delivering the incredible, affecting and death-themed songs from his latest full-length, Carrie & Lowell – was determined to explain his fascination to the crowd.

“To occupy now means to dwell or reside, and to occupy your time can be a pastime, and to occupy also means to control by force, and death is the greatest occupation of all,” he continued. “And it’s something we should celebrate. It’s OK to think about because it occupies us. It’s within us from the day were born.”

The audience – composed largely of young, well-dressed types – was rapt. Stevens could have said anything and his words would have been received with a devoted awe. Aside from the cheers that erupted whenever he paused, the theater was pin-drop silent.

He went on: “There will come a day when we will have to face the start of the greatest occupation of all, which is death. It’s OK to think of this occupant of death as a companion, something that can transform the way you live and let you have a life enlightened, a more joyful life… That’s my calling and my prayer today: to be a steward and to occupy your time with love.” 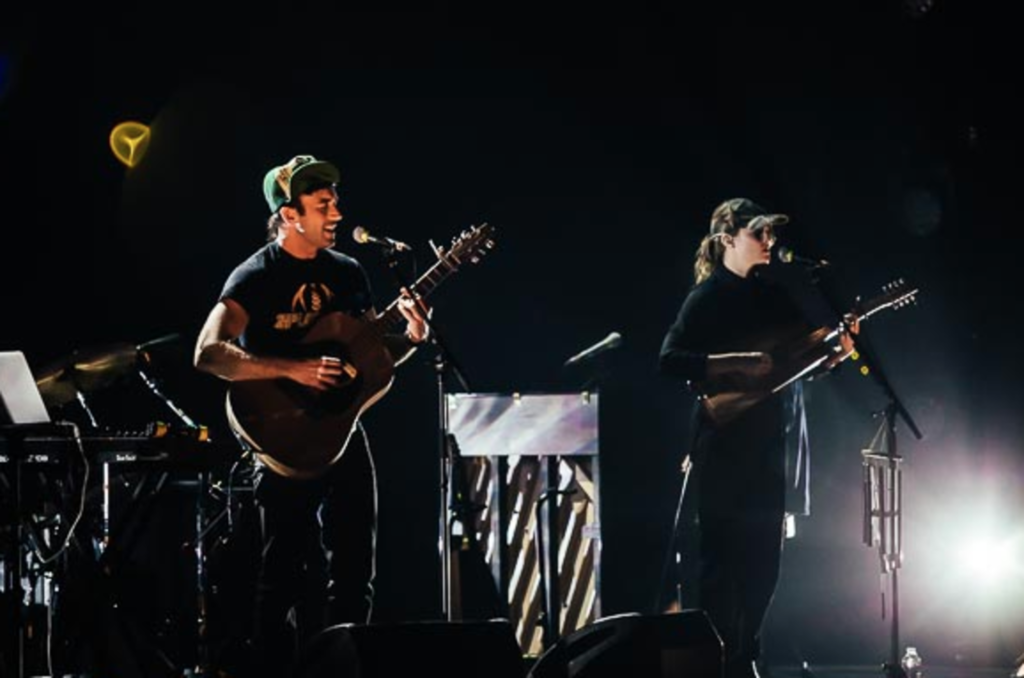 If that is how Stevens views his mission, he can count last night’s performance at the Midland as yet another triumph for his cause. From the moment the show opened – with the delicate “Redford (For Yia-Yia & Pappou)” – to the final (and obvious) encore song, “Chicago” (which Stevens had to quickly – and good-naturedly – restart after he blanked on the lyrics), the audience members were indeed overcome with strong emotions. Love, as Stevens suggested, was prevalent, but there was plenty of sadness, too.

Stevens seemed to revel in the intensity. Many of his songs began with a dramatic lone spotlight on him, center stage in front of a microphone. His four-piece backing band would be lit after Stevens had properly set the mood, helped along by the chapel-like windowpane-shaped screens hanging in the background. These screens would flash images throughout the night: sometimes photos and video clips of Stevens’ youth, sometimes natural screensaver-looking seascapes and landscapes, sometimes simply pulsing, flickering colors and patterns. I was grateful for these occasional distractions: Without them, the weight of Stevens’ music would have been crushing. 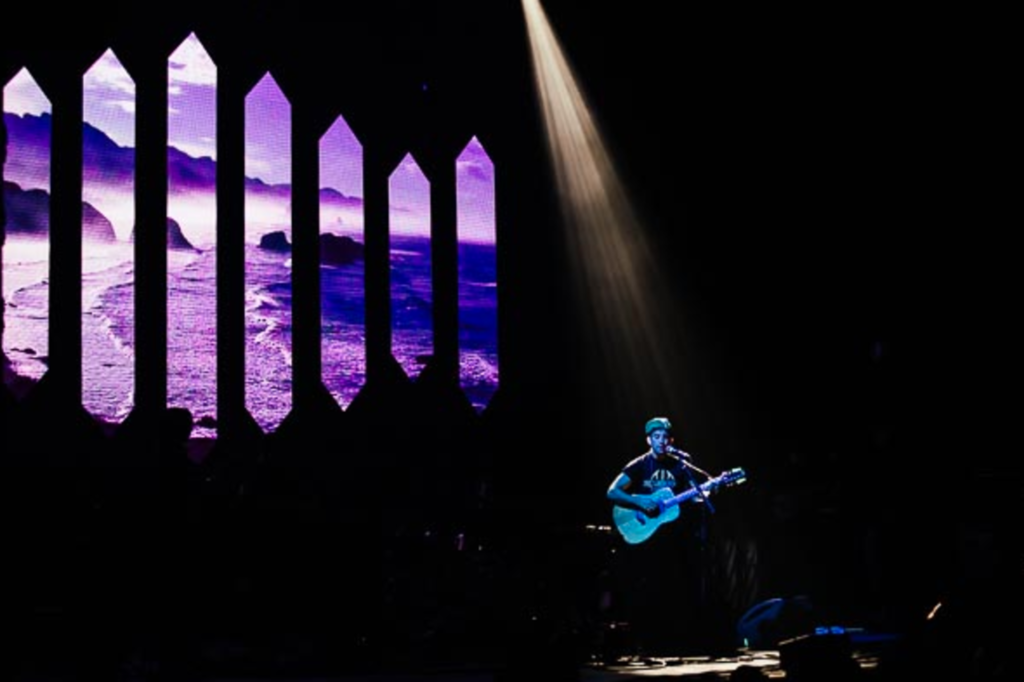 It’s difficult to settle on any singular moment in the show as a highlight. Stevens’ execution throughout was seamless: For nearly two hours, one song bled achingly into another. As several spotlights sent beams out into the audience during “Drawn to the Blood,” I observed the illuminated faces: furrowed brows, clenched jaws and more than a few cheeks wet with tears. 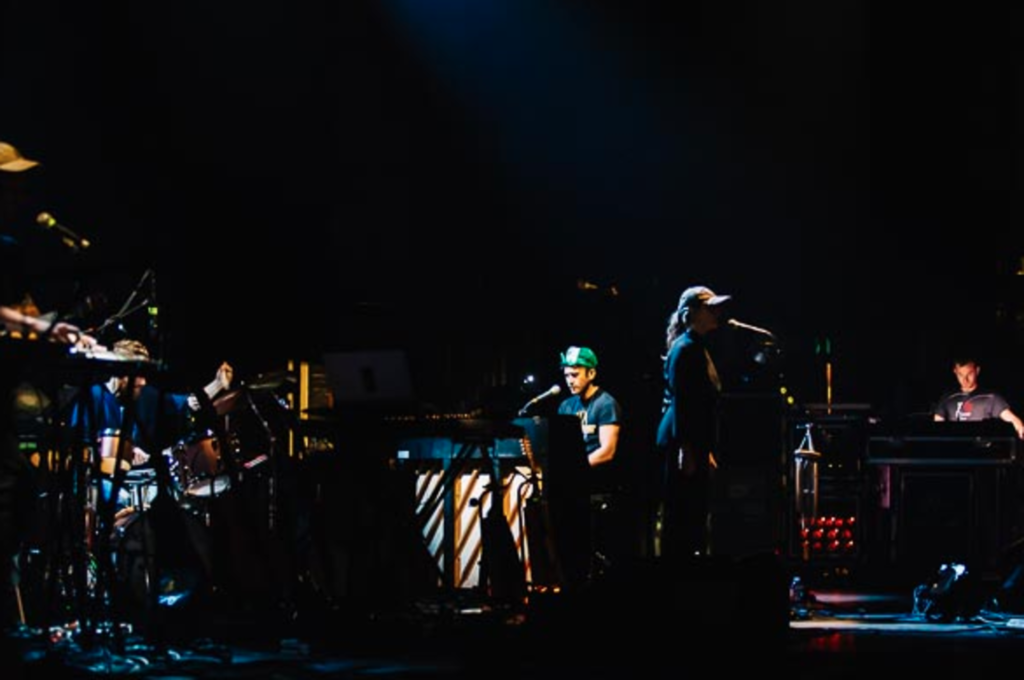 “All of Me Wants All of You” got a sultry, Sade-worthy take, and it was the only moment in the evening when concertgoers seemed interested in moving around as a few bodies swayed in their seats. For “John My Beloved,” the band exited the stage as Stevens took a seat at the piano. The notes were exquisite and silvery, but nothing was as impressive as Stevens’ voice: a crystalline instrument, which he controlled utterly.

One of the most harrowing songs on Carrie & Lowell, “Fourth of July” – written in remembrance of the final encounter between Stevens and his mother, the titular Carrie, who died of cancer in 2012 – became even more so in person. The final lyrics, We’re all gonna die, were repeated a dozen times or more in an ever-loudening crescendo, a crash of bass and drums and chaos, drawing the audience closer and closer to oblivion. 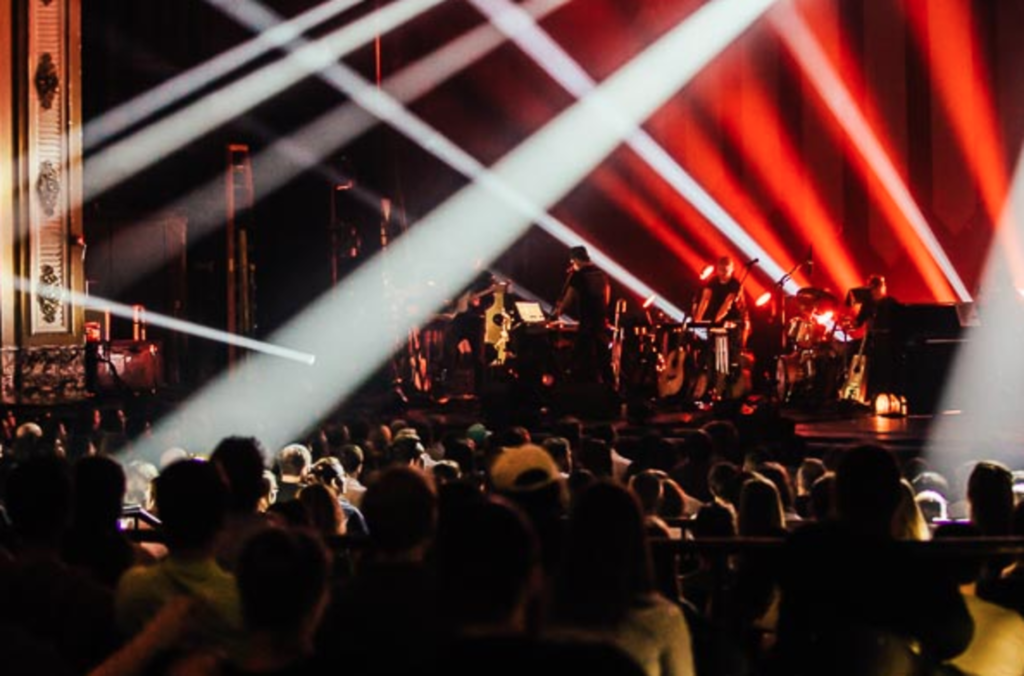 It wasn’t until after “The Devil’s Territory” – with its fragile harmonies and tremulous chords – that Stevens finally spoke, first with words of thanks and then his sermon on the occupation of death. This came as a relief: At last, at last, our sad hero breaks the reverie. (The respite was brief, but necessary.)

The final song before the encore was “Blue Bucket of Gold,” and it was a spectacular end to Stevens’ elegy. Disco balls swirled behind the screens, casting kaleidoscope shadow patterns on the walls and ceiling of the venue as an onslaught of ghostly shrieks and wails threatened to overpower the speakers. It was by far the loudest moment of the evening, and truly a sensory overload. As lights pulsed and the volume grew, a few crowd members closed their eyes and stuffed their fingers into their ears, absorbing the music as they felt it shaking them in their seats.

Stevens beamed as the song ended and he received a standing ovation, and the audience didn’t wait long for the five-song encore. By that point in the evening, Stevens seemed relieved, too, that the difficult part was over: He smiled more, and the music seemed a little lighter. So did his fans.

Leftovers: Montreal’s Laurel Sprengelmeyer – who performs as Little Scream – opened the night. She admitted to being nervous and restarted a song once, but that added to her charms. Listen to her here.

Set list:
Redford (For Yia-Yia & Pappou)
Death With Dignity
Should Have Known Better
Drawn to the Blood
All of Me Wants All of You
Eugene
John My Beloved
The Only Thing
Fourth of July
No Shade in the Shadow of the Cross
Carrie & Lowell
The Owl and the Tanager
In the Devil’s Territory
To Be Alone With You
Futile Devices
Sister
Happy Birthday (a massive crowd sing-along for guitarist Casey Foubert’s absent daughter)
Blue Bucket of Gold
—
Concerning the UFO Sighting Near Highland, Illinois
For the Widows in Paradise, For the Fatherless in Ypsilanti
The Dress Looks Nice on You
John Wayne Gacy, Jr.
Chicago


For the full slideshow from last night, go here.