Suco’s long haul is over 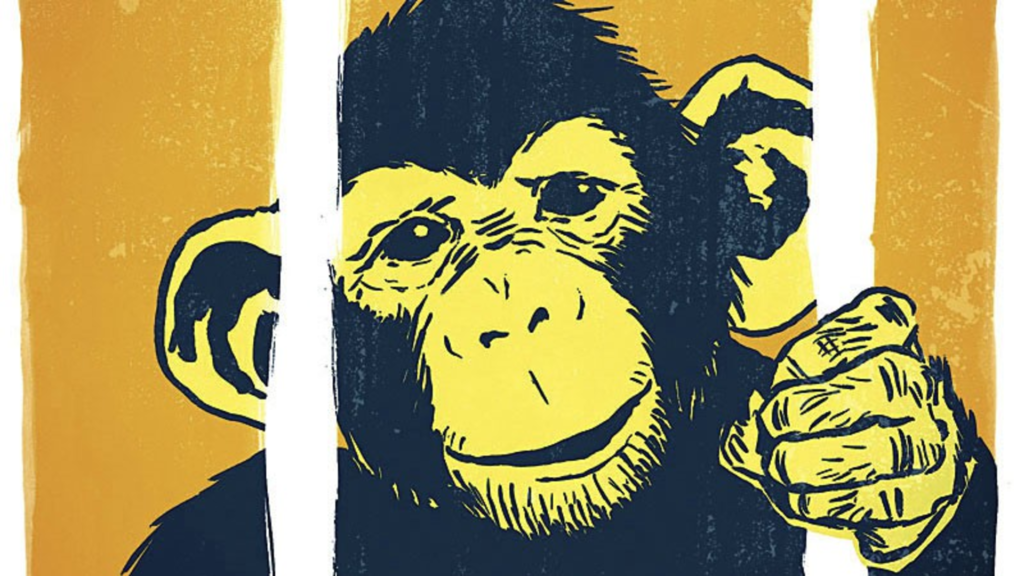 John Michael Oyer just wants his chimp back. He says he raised Suco, a 22-year-old chimpanzee, since she was a baby. She’s now at the Kansas City Zoo. And if Kansas City gets its way, she’ll stay there for the rest of her life.

The scene that put Suco in the zoo has been splashed across YouTube and a TV clip show of police videos. Around noon on October 19, 2010, the 4-foot-tall primate was spotted ambling around Indiana Avenue between 77th and 78th streets. Witnesses told a municipal court earlier this month that the animal was slapping cars, at one point opening the passenger door on a vehicle and terrifying its driver.

With police, neighbors and animal-control officers swarming the area, Suco decided it was time for the real fireworks. She pushed a trash can down Indiana toward a police cruiser, then leaped onto the hood of the car and smashed the windshield. The vehicle’s dash cam filmed the whole thing. Not long after that, Suco, as docile as a basset hound, got into the cargo van belonging to Mark Archigo, the boyfriend of Suco’s other owner, Deborah Kaumans. The spectacle was over, but the drama was about to begin.

Animal-control officers cited Kaumans and Archigo for harboring a dangerous animal in the city, a violation of city ordinance 14.9. The two went to trial earlier this month. But Oyer, who wasn’t in possession of Suco when she got out, says the case wasn’t handled properly. He says it’s a simple matter of getting back something that belongs to him.

“They’ve taken my property,” he said in an interview before Archigo and Kaumans were tried in municipal court. “This is a property-rights issue.”

Not according to city officials. But a new layer of confusion marred the case. The city had placed Suco at the Kansas City Zoo. Archigo and Kaumans were set to be tried together, but Oyer and Kaumans maintained that they owned Suco and that Archigo was a friend who cared for her. Oyer tried to convince Municipal Court Judge Ardie Bland to try him instead of Archigo. He likens the situation to red-light cameras.

“If you got a red-light traffic ticket — you know, one of those signal tickets — mailed to your address, and you went to court, and then your brother came in the court and said, ‘Hey, by the way, I was driving the car that day,’ would the judge let you be the one that accepts the charges?”

In the frequently acrimonious trial, which included 11 witnesses and lasted more than four hours over two days, Assistant City Attorney Todd Wilcher made the case that Suco was being kept within city limits, in violation of the city ordinance. He said none of the more sensational aspects of the October events — whether Suco was a dangerous animal, how she got loose, the extent of the damage caused to the squad car — mattered. The question before the judge, he said, was whether Archigo and Kaumans were “keeping or harboring” a “nonhuman primate” in Kansas City, Missouri.

When Archigo, who had avoided speaking to the press, took the stand, he described a spectacularly unusual long-haul trucking lifestyle shared with Kaumans and Suco. They had trucked together throughout the country for years, never having a problem. Archigo and Oyer had completely redesigned Archigo
and Kaumans’ semitrailer to provide space and restraints for the chimp, he said.

Calling the chimp “a jewel,” Archigo described Suco’s diet as wide-ranging, including produce and meat. Questioned by defense attorney Camron Hoorfar, Archigo spoke at length about Suco’s favorite fast-food choices when they were on the road.

At McDonald’s, he said “She would have chicken salad, and typically, for added protein, I would throw some tuna on the salad. And she has an option of if she wants to eat the dressing or not.”

“She likes Taco Bell,” he continued. Her
favorite item: the Burrito Supreme.

On the stand, Oyer and Archigo outlined four independent mechanisms meant to keep Suco secured in the berth of the cab, including a tether system, bars and sliding doors. It was a system that Oyer said had never failed in the 20 years Suco had spent cruising the interstate with Archigo and Kaumans when she wasn’t staying with Oyer.

Archigo and Kaumans spent that October morning preparing to pick up a load and get on the road. They locked Suco in the semi and left the truck in a lot that Oyer owns on Indiana Avenue while they picked up clothes for the trip. While they were gone, Suco got loose.

The defense argued that this was likely the work of somebody breaking into the truck and springing the chimp. Oyer says he thinks that somebody was trying to steal her. Archigo testified that Suco had never breached one of the restraints, much less all four, and that they had been away from her for only 40 minutes when she got out.

On the stand, Archigo testified that he didn’t remember specifically saying he owned Suco, but if he did, it was so that police and animal control would allow him to approach her and secure her in his vehicle.

Defense attorney Hoorfar attempted to establish that Archigo and Kaumans had kept Suco in an undisclosed Cass County location, and that the chimp was within city limits only briefly, before trips in the semi got under way.

Hoorfar and Wilcher argued over the legal definition of the words “keeping” and “harboring” in the city ordinance. Hoorfar quoted the city’s definition of keeping or owning: “any person who feeds or shelters any animal for three or more consecutive days or who professes ownership of such animal shall be deemed to be owning or keeping.” Plus, he noted, Suco didn’t have a habitat, pen or cage within city limits, so the couple couldn’t be guilty of keeping her there.

Wilcher hit back with the city’s definition of “harboring”: “any person who offers asylum, refuge or sanctuary to any animal on a basis so temporary as to not be deemed to be owning or keeping shall be deemed to be harboring.” Regardless of whether Suco lived full time in Kansas City, she was being harbored within the city just by waiting in the truck for Archigo and Kaumans to return, he argued.

Ultimately, Bland decided that leaving Suco parked in their semi fit the legal meaning of harboring, and he found Archigo and Kaumans guilty. He sentenced them to two years’ probation and ordered them each to pay modest fines — $500 for Archigo and $250 for Kaumans — and $1,524.25 in restitution to the city for repairs to the police car.

But any apparent moment of legal clarity was soon hazed over by the end of Bland’s ruling.

Rather than deciding whether Oyer and Kaumans could take Suco home or the city would take permanent custody, Bland left Suco’s fate up in the air. Initially, he ordered the chimp to be removed from city limits, handing the owners an apparent victory. But Wilcher asked Bland to reconsider, on the grounds that the city had the right to give the chimp to a sanctuary or a zoo because the ordinance had been violated.

The ordinance states, in part, that if an animal that’s declared to be dangerous is found within city limits, “it will be immediately seized and promptly destroyed or disposed of in some other manner … including but not limited to giving such animal to a licensed refuge or zoo.” Bland changed his ruling to state that Suco should be in the possession of Oyer, Archigo and Kaumans or somebody else legally allowed to possess her — apparently keeping her at the zoo.

The ruling left both the prosecution and Suco’s owners a little baffled. While speaking to reporters outside the courthouse, Oyer asked the question on everybody’s mind: “They said all we have to do is pick her up and get her out of here, right?”

Wilcher had a different interpretation of Bland’s order, saying the city followed the law by delivering Suco to the zoo, and that’s where she would stay.

“The city is not releasing [Suco] at this point, unless they get an order by the court otherwise,” Wilcher said.

And the city doesn’t think that will happen.

Kansas City’s director of Neighborhood and Community Services, David Park, says the city is going to keep Suco at the zoo permanently. He says the city declared Suco a dangerous animal after a biting-and-scratching incident in 1994, after which the city briefly took possession of her. Oyer says it was never proved that Suco harmed anybody, and the city returned the chimp to her owners. The city changed its animal ordinances in 1995, prohibiting people from keeping or harboring primates within the city. With the ordinance change came a grim warning from the city. Officials notified the chimp’s owners that if Suco was found within city limits again, she would be put down.

Oyer still claims that Suco is always kept beyond city limits, and that the chimp’s long history of interacting with humans shows she isn’t a danger to anybody.

In the tree or in the truck, the chimp proved to be a powerful marketing tool. “Let’s say I trimmed your trees. What are you going to be talking about the next day?” he asks.

“I’ve had some really good-looking gals. I’ve put them in their sports bras, and get ’em out there and have them rake up the yard and what have you. Nobody would be looking at the girls. They’d be looking at that chimp,” he says.

But with the new ordinances, the Monkey Tree show came to an end.

Aside from being a business partner, Oyer describes the 20-plus years he and his four children spent with Suco as a happy domestic relationship. She was almost a fifth child to the family, he says. He beams while recalling how the chimp could turn lights on and off, identify Oyer’s favorite beer at the liquor store, and even open the refrigerator and pick out something to drink when she was thirsty.

“Heck, I can be sitting there cooking. She’d come right up there, and we’ll flip pancakes together. I mean, she ain’t perfect at it,” he says. “That’s my baby. That is my baby. … Our life revolves around her.”

The zoo, he claims, is not the right environment for a chimp that grew up around people.

“It would be like if I took my dog and threw her out there with a pack of wild dogs. They’d tear my dog up,” he says. “She [Suco] doesn’t live by the law of nature. She lives by rules. She’s potty-trained.”

Oyer says he’s not going to quit fighting. He’s hopeful that Archigo and Kaumans can successfully appeal their conviction, and that he can then reclaim Suco. If an appeal fails, he will consider a lawsuit to get her back.

Park says giving Suco back to private owners simply isn’t worth the risk, and the city is ready to defend in court its decision to keep Suco at the zoo permanently.

“They might sue me because I gave her to the zoo,” he says. “But I don’t want to be sued by the parents of the child the chimp kills the next time she gets loose.”