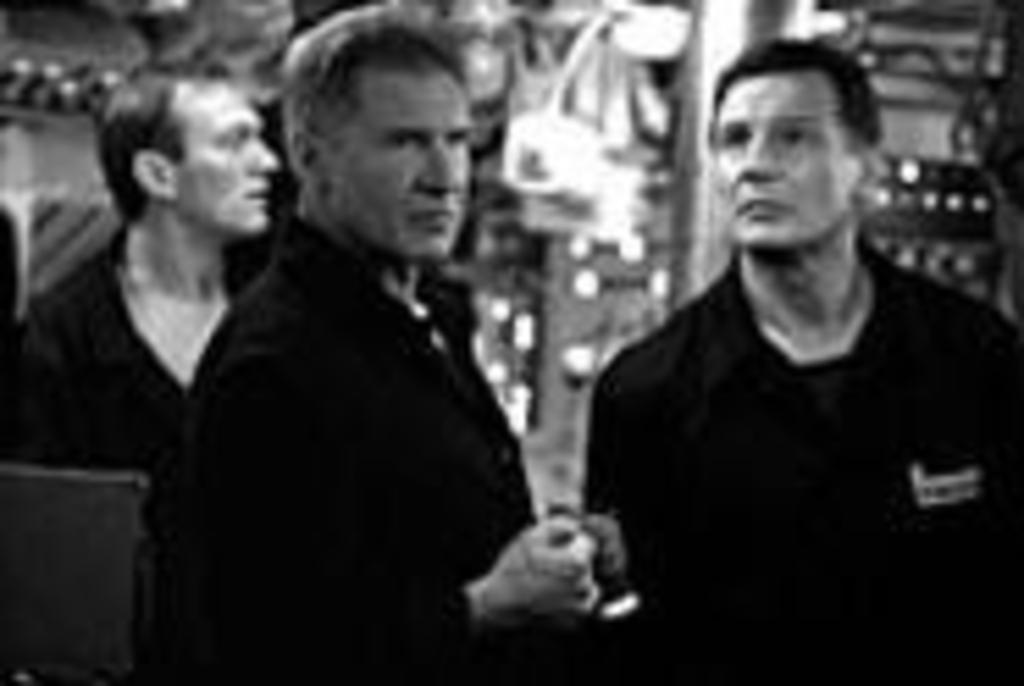 Of all the A-list men playing dedicated authority figures, Star Wars alums Harrison Ford and Liam Neeson remain among the most amusing and pleasing, which is why K-19: The Widowmaker glides along engagingly rather than sinking. In many ways, it’s just another cramped, dank submarine movie — bells, whistles, leaks, danger-danger! — but well-established playboys Ford and Neeson put on an enjoyable show as Russian lords of discipline. Watching them issue orders in Boris-and-Natasha accents to their pallid, relatively unknown crew, one can’t help but appreciate the beauty of cinema and all the dramatically rendered falsehoods highlighting its search for truth.

For the edification of some and perhaps to the dismay of others, visceral kicks take a backseat to veracity in K-19. The coproduction between Paramount and National Geographic Feature Films above all seeks to return us to a volatile time in history with all the authenticity it can muster. “For 28 years this story could not be told,” explains an opening title card, and when we enter the global climate of 1961, it’s easy to see why. The Cold War is raging, and this is the true story of a Russian nuclear submarine that nearly exploded perilously close to the United States on the Fourth of July. Hardly a point of pride for anyone concerned, despite ample heroism illustrated in thwarting the disaster.

Looking sternly dignified but significantly less Photoshopped than in the film’s poster, Ford plays Captain Alexei Vostrokov, a mega-hardass whose loyalty to the Motherland is exceeded only by his enormously self-indulgent ego. When the equally dutiful but less aggressive Captain Mikhail Polenin (Neeson) is deemed by Admiral Bratyeev (John Shrapnel) and Marshal Zelentstov (Joss Ackland) to be readying his titular craft too slowly for service, Vostrikov is called to command, with Polenin to serve on board as his subordinate officer. While the submarine awaits completion in port, ten men die in accidents, and when it comes time for the maiden voyage, the christening champagne bottle bounces off the hull without shattering. This will be no pleasure cruise.

The mission of K-19’s crew is to surface through the ice of the Bering Sea, fire a test missile and sneak past NATO bases to its patrol station 400 kilometers off the U.S. coast, roughly between New York City and Washington, D.C. The boyish crew’s unspoken destiny, however, is to become pawns in a prideful, self-destructive game Vostrikov is playing with himself. The son of a revolutionary banished to the Gulag, the cruel captain sees everyone on board as cogs in his bad machine, which he intends to push to — and beyond — its limits.

Since director Bigelow — working from a screenplay by Christopher Kyle — is required here to jettison her wicked whimsy (Near Dark, Strange Days) in service of historical accuracy, the movie trades on bleakness and desperation. More than half of the film is dedicated to glacially slow character development as Vostrikov — and, by proxy, Polenin — run their men through seemingly endless redundant drills.

In one of his best films — The Mosquito Coast — Ford turned anti-hero and madman, but here it’s just about impossible to get anywhere near his character. His blind, pointless ambition (a senseless dive almost to crush depth to “test the men”) is the cause of everyone’s grief, so his eventual lionization is hard to swallow.

The film is unflinching in depicting the ghastly results of radiation poisoning — which couldn’t be more topical as the Bush administration presently moves to bury as much as 70,000 tons of radioactive waste at Yucca Mountain in the Nevada desert, a mere 90 miles from Las Vegas. Watching these determined Russian men in their Spam tin wrestling with killer nukes makes one fervidly hope for a future in which untimely death is no longer a superpower’s stock-in-trade.