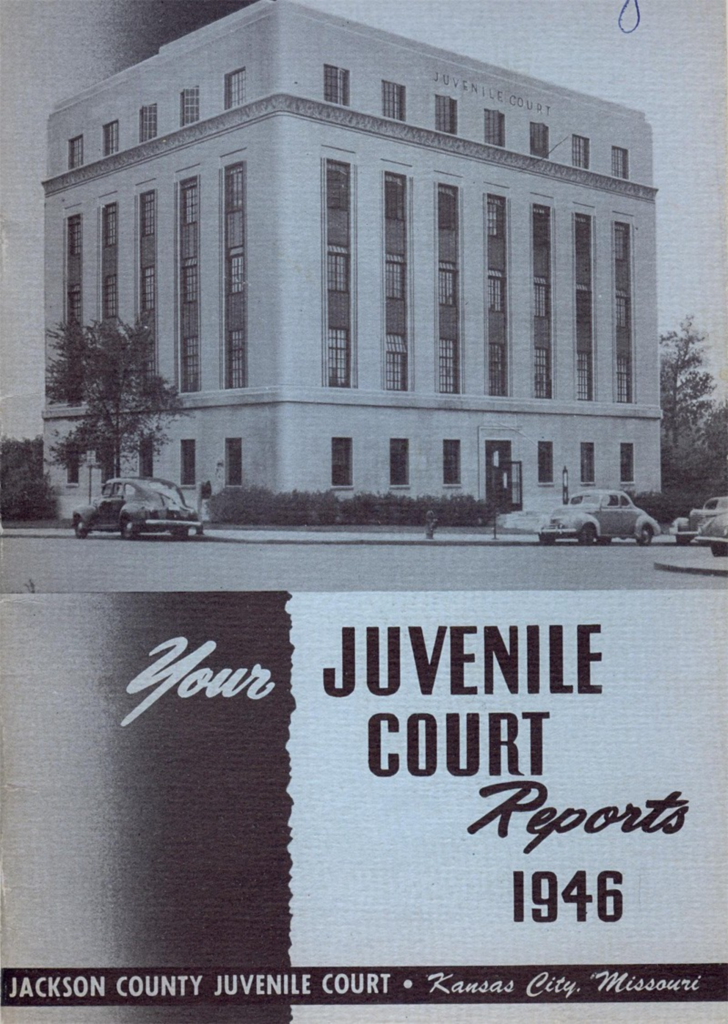 Representative quote: “The habit of stealing cars was now strongly established in Bill, and cars would continue to be parked on streets with keys in the ignition.”

In his preface to a 1948 report on Jackson County’s latest experiments on juvenile ne’er-do-wells, Judge Roy Gowan writes, “The modern Juvenile Court is a laboratory for handling youth.” Such a claim implies that there’s a science to rehabilitating or helping kids. But whether the county had hit upon any coherent theories or methodologies by the time Harry Truman was in the White House remains unclear from this report.

Almost entirely bereft of hard data, the 24-page report, assembled as a pamphlet, reads like a Christmas letter. It offers a spirited summation of the year’s most interesting events, most of which are presented as triumphs. In another introductory letter, Chief Probation Officer Merle D. Beckwith explains, “Instead of statistical reporting we have presented some actual case histories taken directly from the files of the department.”

Bonus: Those case histories come illustrated with jaunty cartoons. Here are some of their experiments — er, “case histories” — under the report’s original headings.

Sixteen-year-old Bob, a “Negro boy,” was pressured by neighborhood “big shots” into burglarizing a grocery store “adjacent to a Negro shopping center.” (Your Crap Archivist apologizes for the illustration.) Bob and company found no cash in the register or the manager’s office. The report takes on a dime-novel tone about what happened next: “Bob’s dreams of money and good times vanished when he heard a tapping at the window and saw the police there.” Bob escaped — the report blames some “tall weeds” outside the back door — but was apprehended later that night.

The report has good news about Bob: The young man’s probation officer interests him in the neighborhood recreation center. There, “Bob, a small chap, weighing a little more than a hundred pounds, has found boys who excelled in athletics, particularly boxing, and he has transferred to them all of the hero worship that he formerly gave the neighborhood toughs.”

The court’s conclusion: “No further trouble is expected of him.”

Fourteen-year-old Jackson County “parental home” ward Ellen had been hauled before the court for “running away and staying with a woman of unsavory reputation.” Turns out, she had fled “a broken home,” she “did not fit in any place” and she displayed “primitive, uncouth, anti-social behavior.” Authorities worked to learn about Ellen, about “her temper outbursts, her need for prestige, and what was causing her to side with unapproved people.”

The court’s conclusion: “Those who know Ellen feel that she will eventually be able to return to her home.”

The daughter of “uneducated, small-town people,” 12-year-old Jean — “an attractive, red-haired girl” — was the victim of vague yet unpleasant circumstances. “Her parents did not feel there was much of a problem in her sexual behavior. They seemed to think she was just unfortunate in being reported to the juvenile authorities while others, ‘just as bad,’ went free.” Before finally placing the poor girl in a detention home, those authorities had dealt with Jean’s parents three times: first in a molestation case, then for “non-attendance of school because of filth diseases,” and last when “she was the center of a group of adolescent boys involved in overt sexuality.”

Good thing that third episode tipped everyone off that something might have been wrong. The court’s conclusion: “It is hoped that the general standard of living in the family may be improved.”

After sobering up with her husband in the drunk tank one February night, a woman became hysterical, explaining to the officers that before the couple had hit the bars, they had left four small children at home — “the oldest being only six.” Officers soon discovered the kids asleep but unfed in an unheated home. An investigation uncovered months of drunken neglect, but authorities offered the parents one more chance under these conditions: The mother must remain home, the father must not neglect his job, and the home and children must be kept in a reasonable condition.

I’ll let the court finish the sorry tale: “However, this home life became too boring to a mother who had married while she was too young, and approximately five weeks following the above mentioned episode they were again arrested by the police.”

The court’s conclusion: For four months, the children were placed “with good, Christian people.” Because the parents had “completely changed their mode of living,” the kids were returned, where they were expected “to grow into manhood and womanhood as fine examples.”